A species of Spinotarsus   characterized by the very large, regularly curving lateral metaplical spine, in combination with the presence of a spine at the base of the solenomerite and a row of denticles on the terminal part of the telomere.

The name is a composite Latin adjective, meaning “with a strong hook” and referring to the strong lateral, hook-shaped spine of the gonopod coxa.

HEAD. Parietal and interocular furrows present; 7 supralabral setae. Antennae reaching to ring 6 when folded back. Eyes reaching to median tangent to antennal socket, each with nine rows of ommatidia, 7 horizontal rows, and a total of ca 38 ommatidia each.

The basal spinose lamella of the telomere (bla) is a key character for Spinotarsus   (the name actually refers to the lamella – the telomere was formerly referred to as the tarsus). Many species of Spinotarsus   possess an additional apomorphy, namely a darkly sclerotized ridge on the posterior surface of the telomere, but such a ridge is absent in S. fortehamatus   sp. nov. In the most recent key to species of Spinotarsus   ( Kraus 1966: 110–113), the new species keys out without problems to couplet 60, as follows (couplet texts translated from German and adapted to current terminology, characters of S. fortehamatus   sp. nov. in bold): couplet 1: Gonopodal metaplica with one or several dark sclerotized lateral spines which stand clearly out in strict oral view → couplet 38: One or more spine(s) (“Postfemoraldorn”) at base of solenomere present → couplet 59: One spine at base of solenomere → couplet 60. “Couplet” 60 is, however, deficient in the key, which can be seen by comparison with the older key by Kraus (1960: 122, “couplet” 42). The “couplet” in question is actually a “triplet”, but the third option is lacking in the 1966 key. In translation, “triplet” 60 in Kraus (1966) should run:

Continuing in couplet 65, the new species fulfils the second alternative: Lateral metaplical spine directed ± apicad → couplet 68: Metaplica apically without a process or just with a delicate hyaline, spoonshaped appendage → couplet 81: Terminal lamella of telomere with spiny margin and 1 –2 longitudinal row s of denticles on the internal surface (→ couplet 82) vs Terminal lamella of telomere completely smooth, internal surface of telomere without obvious spine rows (→ couplet 84). The new species has a smooth margin of the terminal part of the telomere, but it also has a very obvious row of spines on the internal surface of the telomere. It thus fits one criterium of each alternative. In addition to its unique combination of key characters, it also differs from congeners in the shape of the lateral metaplical spine: none of the almost one hundred described species of Spinotarsus   have an equally large, equally smoothly curved lateral metaplical spine. Those which come closest in this character, i.e., S. demotus Kraus, 1966   ( Angola), S. kruegeri Kraus, 1966   ( South Africa), S. lanceolatus Kraus, 1966   ( Zimbabwe) and S. pusillus Kraus, 1966   ( South Africa), differ clearly in other characters.

The lack of ozopores on one or both sides of certain body rings is a highly unusual trait. In juliformian millipedes, ozopores are normally present in an uninterrupted series usually starting on body ring 6, rarely on ring 5, exceptionally on ring 3, and continuing to include the last podous ring. Up to now, the only exception to this rule is constituted by two species of the family Mongoliulidae   , in which ozoporeless body rings occur in a regular pattern along the body ( Enghoff et al. 2017). 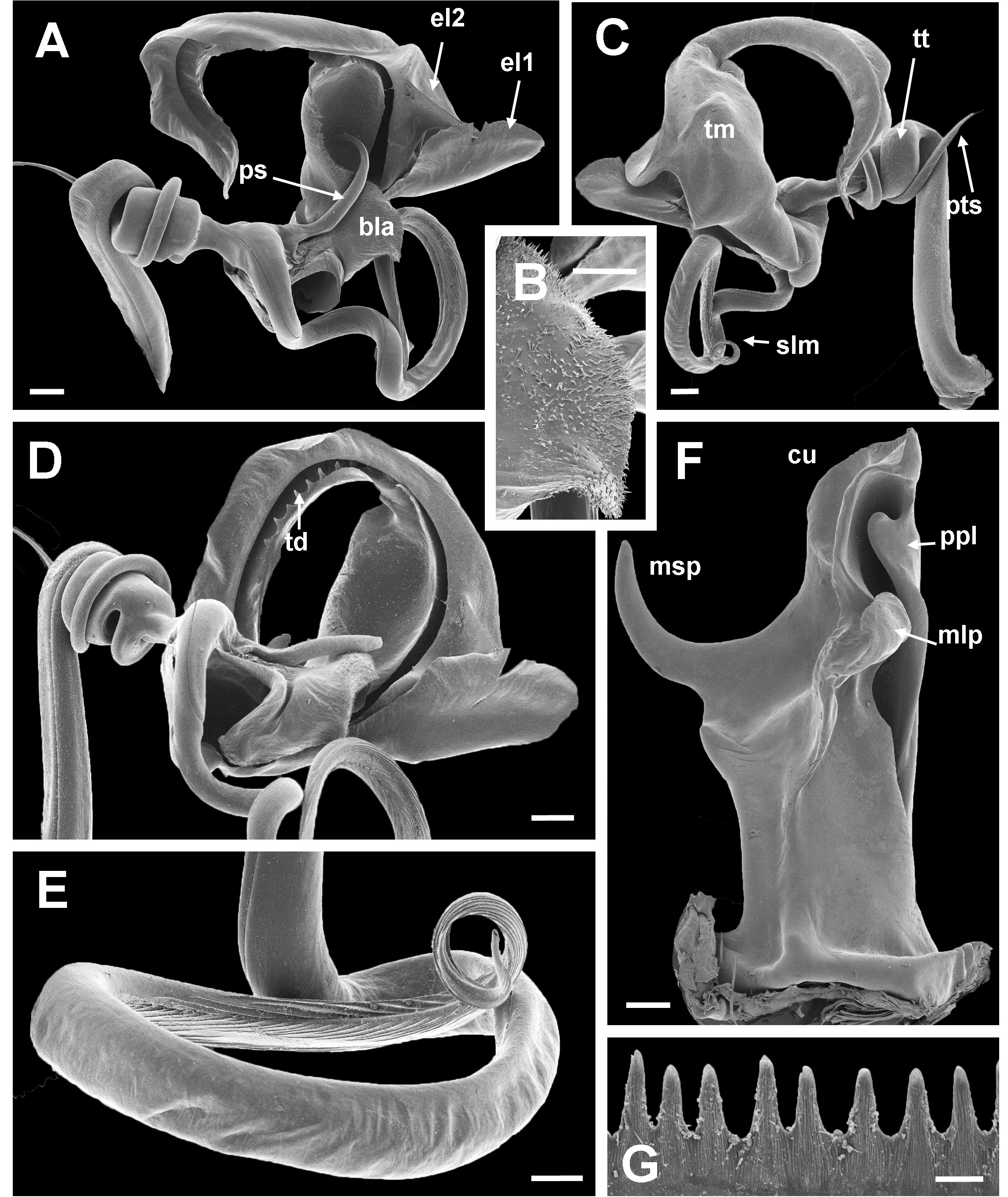