Diagnosis: Male habitus similar to that of Metilia   , but entirely brown. Body length 23–35 mm. Males resembling a dry leaf, whereas females resemble a twig. Eyes slightly conical, with a small, apical wart. Vertex with arched apex, higher than eyes, and tuberculated in females. Head and pronotum smooth in males, with multiple tubercles in females. Prothoracic femora with 6 posteroventral spines, rarely with 5 or 7 on one femur. Prothoracic tibiae with 20–21 posteroventral spines with darkened apex, and 15–17 anteroventral spines. Mesothoracic wings shorter than metathoracic ones at resting, both are longer than abdomen in males but shorter in females, costal vein sinuous and excavated in the male. Lateral abdominal expansions of males of moderate size, in general, both sexes lack prominent lobes. Cerci cylindrical, distal cercomere conical, with a concave area dorsally.

Remarks. Metacanthops differs from Metilia   in having uniformly brown forewings, whereas the same in Metilia   vary from dark green to yellow. However, it is in the head where conspicuous differences between Metacanthops and Metilia   , and between them and Acanthops   can be observed ( Figs. 13–22 View FIGURES 13–22 ). For instance, the compound eyes of Metacanthops are only slightly conical and bear a small apical wart, whereas the same in Metilia   and Acanthops   are strongly conical with a more developed apical wart; the vertex of Metacanthops rises above the compound eyes, in the males it has distinct undulations in its central area and conspicuous juxtaocular process in females ( Figs. 14–17 View FIGURES 13–22 ), whereas in Metilia   and Acanthops   these features are missing. Metacanthops has a robust and tuberculated pronotum, but in Metilia   the same is relatively narrower and smooth ( Figs. 18, 19 View FIGURES 13–22 ). The number of forefemoral posteroventral spines apparently constitutes a good diagnostic character in this case, as we consistently found 6 spines in all studied specimens of Metacanthops (however, in few rare cases some specimens have 5 or 7 in only one of their prothoracic legs), whereas we consistently found 7 forefemoral posteroventral spines across all specimens of Metilia   (unpublished data). In addition, the margins of tergites V and VI are slightly prominent and rectangular in Metacanthops, whereas in Metilia   they are dilated, semicircular or subtriangular.

The reliability of certain characters to separate acanthopid genera, such as vertex features, wing shape, abdominal appendages and, particularly, the number of forefemoral spines, have been a matter of controversy ( Chopard 1916; Giglio-Tos 1927; Rehn 1935; Terra 1995; Roy 2002). Chopard (1916) considered that the diagnostic characters of Plesiacanthops   , Metilia   , Decimiana   , were all of little relevance for making such distinction, and thus he considered these genera merely as "subdivisions" of Acanthops   . However, Giglio-Tos (1927) and Rehn (1935) considered that those characters were valid because they are commonly used at genuslevel in other mantodean taxa. Roy (2002) recently revisited this issue and suggested that the differentiation between Metilia   and Acanthops   cannot be justified based on the number of forefemoral posteroventral spines. For instance, he argued that Acanthops tuberculata   has 7 posteroventral spines, unlike the rest of species in the genus with only 6 spines, whereas A. amazonica   (which normally presents 6, but males sometimes having 5 or 8 in either forefemur) should be transferred to Metilia   , whose species also have 7 spines. Although we agree with Roy (2002) in that amazonica   is not a member of Acanthops   , the newly available evidence suggest that its placement among Metilia   should be reconsidered. Accordingly, we now formally transfer Acanthops amazonica Beier, 1930   to Metacanthops. 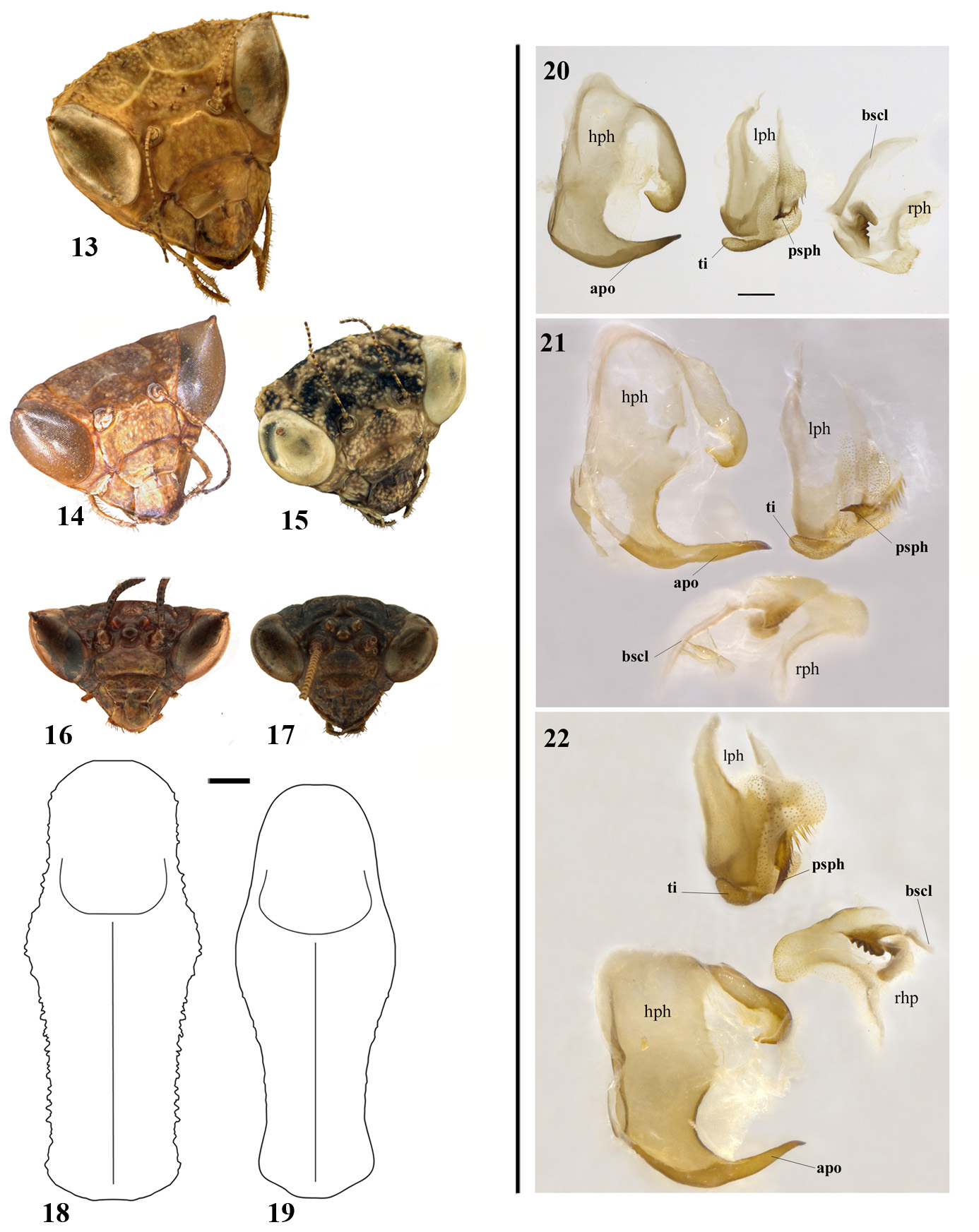