DISTRIBUTION: Monodelphis saci   is currently known from at least 14 localities scattered along the south bank of the Amazon in the Brazilian states of Pará, Mato Grosso, Rondônia, and Acre (fig. 2).

DESCRIPTION: Dorsal pelage superficially brownish from behind ears to rump (varying from near Clove Brown to Olive Brown, slightly darker on the rump than over the shoulders), without distinct stripes or other sharp pigmental discontinuities, but head conspicuously reddish (near Sepia); middorsal fur 4–5 mm long and grayish basally. Ventral pelage gray-based and usually brownish on most of chin, throat, groin, and flanks, but abruptly self-whitish midventrally on chest and abdomen. 5 Pinnae macroscopically naked, but densely covered internally and externally with short, brown hairs. Mystacial and supraorbital vibrissae mostly dark, with longest mystacial hairs extending behind eyes when laid flat against cheek but not reaching pinnae. There are two supraorbital vibrissae on each side (but only one is present on the right side on MPEG 42601 and UFPA 1422). Genal vibrissae lighter colored than the remaining facial vibrissae, usually reaching the pinnae but rarely extending behind their posterior border. Gular gland (indicated by an area of yellowish fur on the throat) present in all mature males and, apparently, in one out of three mature females examined. Hands and feet covered dorsally with short, mostly light-brown hairs. Ungual tufts very short (restricted to the bases of the manual claws and reaching only the middle of the pedal claws). Thenar and first interdigital pad of pes separate (not fused). Hypothenar pad of pes present (e.g., on MCN-M 2301) or absent (e.g., on MPEG 42956). Scrotal skin light brownish to cream, covered with pale (near Tilleul-Buff) hairs. Mammary formula apparently 3–0–3 = 6 (MPEG 42956), all abdominal-inguinal. Tail about half as long as combined length of head and body (mean LT/HBL = 0.51 in 8 males, 0.46 in three females; tables 2, 3), dark brown dorsally but mottled ventrally with pale blotches in mature specimens. Body pelage extends onto tail farther ventrally than dorsally. Caudal scales (discernible mostly on the distal portion of the tail) arranged in predominantly spiral series.

Crowns of I2–I5 increasing in width from front to back (such that the crown of I5 is distinctly wider than the crown of I2); upper canines usually simple, without distinct accessory cusps (but tiny accessory cusps are sometimes present in juveniles and young adults; e.g., in MN 74002, 74003, 75511); postcanine diastemata very small or absent in upper dentition; P2 and P3 usually subequal in width, or P3 slightly wider than P2 (e.g., on UFPA 1260 and 1422).

Lower dentition also without distinct postcanine diastemata; p2 and p3 subequal in height; anterior cingulid of lower molars narrow (on m2 and m3 these shelves are unambiguously lingual to the hypoconids of m1 and m2, respectively); lower milk premolar (dp3) narrow, with an incomplete (bicuspid) trigonid and a minimally differentiated anterior cingulid (MN 74002); entoconids of m1–m3 small or indistinct.

COMPARISONS: Monodelphis saci   shares the diagnostic external and craniodental traits of the subgenus Mygalodelphys   and therefore differs from species in other subgenera by having body fur that extends onto the tail farther ventrally than dorsally, lacking a distinct frontal process of the jugal, lacking parietal-mastoid contact on the lateral braincase, having a small sphenorbital fissure through which the basisphenoid is not exposed laterally, having narrow anterior cingulids on m2 and m3, and having indistinct entoconids on m1–m3 ( Pavan and Voss, 2016). Additionally, M. saci   can be distinguished externally from sympatric congeners by its much smaller size and by its lack of conspicuously patterned dorsal pelage: whereas M. saci   is uniformly brownish with reddish highlights only on the head, M. glirina ( Wagner, 1842)   and M. touan ( Shaw, 1800)   have reddish flanks, and M. emiliae ( Thomas, 1912)   has a grayish midbody contrasting with its reddish head and rump.

Monodelphis saci   can be readily distinguished from M. handleyi Solari, 2007   , and M. ronaldi Solari, 2004   , by its much smaller size (most external and all craniodental dimensions of

On average Monodelphis saci   is smaller than M. reigi Lew and Peréz-Hernández, 2004   , in all measured external and craniodental dimensions, and is consistently smaller in four dimensions (HBL, TL, CBL, PL) that exhibit nonoverlapping variation in these species. In addition to the aforementioned differences in pelage color ( M. reigi   is uniformly dark brown), M. saci   lacks the conspicuously elongated rostrum and the distinct postcanine diastemata of M. reigi   .

By comparison with Monodelphis osgoodi ( Doutt, 1938)   and M. pinocchio Pavan, 2015   , M. saci   can be distinguished, among other features, by a much broader and less elongated rostrum (measurements of PB exhibit nonoverlapping variation in pairwise comparisons of M. saci   with either species), by the absence of distinct postcanine diastemata in the upper and lower dentition, and by shorter maxillopalatine fenestrae that extend anteriorly only to M1 (maxillopalatine fenestrae extend anteriorly to P3 or to the P3/M1 commissure in M. osgoodi   and M. pinocchio   ).

Monodelphis saci   is substantially larger than M. kunsi Pine, 1975   , in all measured external and craniodental dimentions (e.g., males of these species exhibit no overlap in HBL, CBL, PL, PB, and LM). In addition to its reddish head and pale-mottled caudal undersurface, M. saci   also differs from M. kunsi   by its longer dorsal pelage (4–5 mm versus 3 mm in M. kunsi   ), tail scales in predominantly spiral series (annular series predominate in M. kunsi   ), a more elongated rostrum (best appreciated in side-by-side cranial comparisons), distinct lateral inflections where the zygomatic arches join the rostrum (absent in M. kunsi   ), a reduced facial exposure of the lacrimal (not extending anteriorly beyond the M1/M2 commissure, versus dorsal to M1 or extending to the P3/M1 commissure in M. kunsi   ), and upper incisor crowns that increase in width from I2 to I5 (versus I2–I5 crowns subequal in M. kunsi   ).

Monodelphis saci   probably occurs sympatrically with M. emiliae   and M. glirina   throughout its known geographic range, and it occurs sympatrically with M. touan   between the Xingu and Tocantins rivers. Sympatry among M. saci   , M. glirina   , and M. touan   has previously been reported from Floresta Nacional de Carajás ( Martins et al., 2012), whereas sympatry among M. saci   , M. glirina   , and M. emiliae   was recently reported from the upper Rio Acre (Abreu- Júnior et al., 2016). Monodelphis saci   and M. glirina   occur syntopically along the middle Tapajós (where both species were caught in three lines of pitfall traps by the second author), and it occurs syntopically with M. emiliae   at Mina do Palito (where the two species were caught in the same line of pitfall traps by A.O. Maciel and J.O. Gomes; personal commun.).

ETYMOLOGY: The specific epithet is a noun in apposition and refers to the Brazilian folkloric character Saci, a one-legged gnome with a red cap. Saci is allegedly derived from the Yaci Yaterê of Tupi-Guarani mythology, to which elements of African and European folklore have been added over the last several centuries ( Cascudo, 1947). 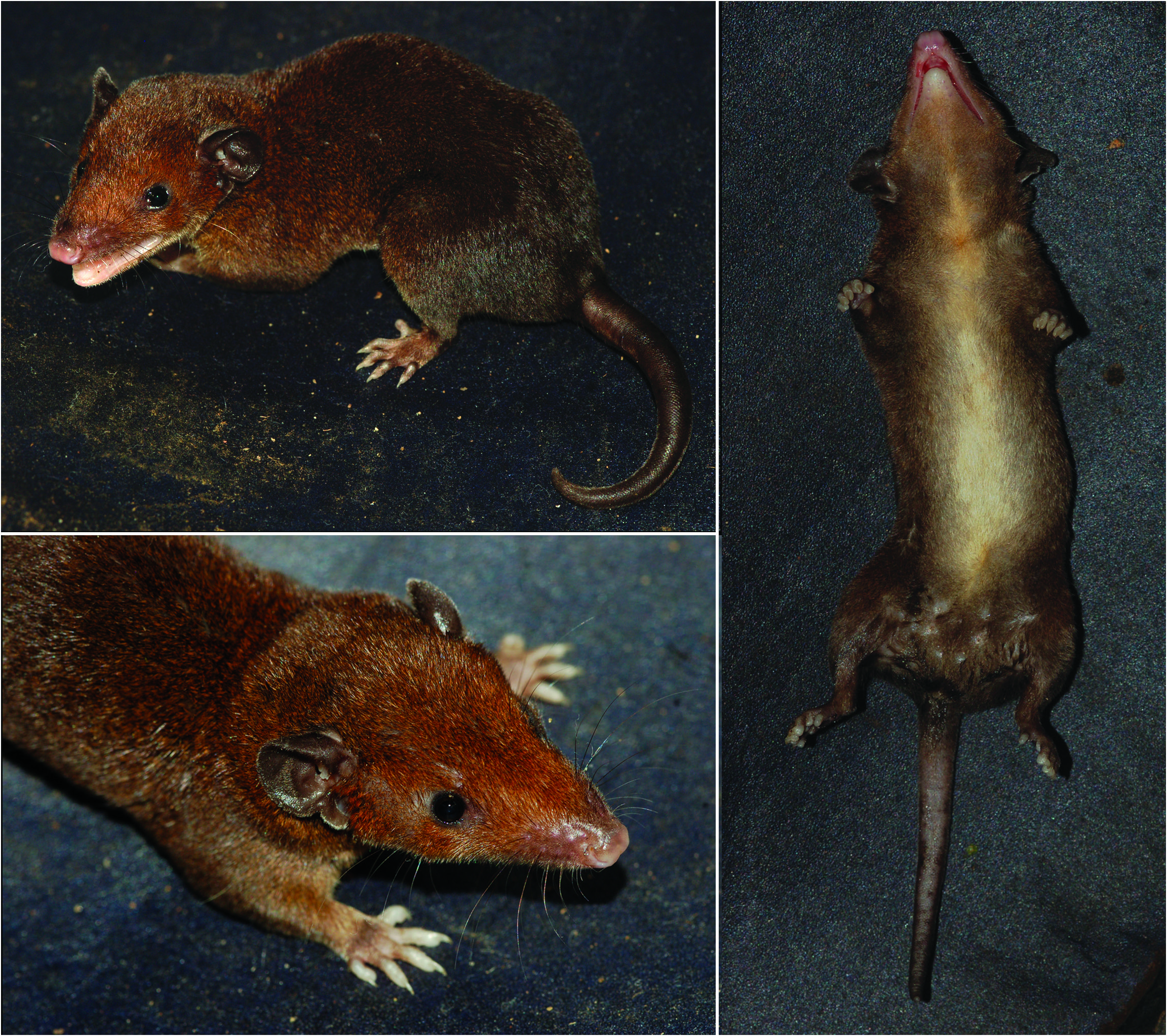