Description. As re-described by Williams (1992a), Alcyonium fauri Thomson sensu lato encompasses material with a wide range of colony growth forms (“membranous, globular to capitate, or lobate”), colors (“purple, pink, white, golden yellow, orange, or dark smoke-grey to dark brown”), and polyp armature (polyp sclerites ranging from dense to very sparse or absent). We consider it likely that multiple species have been lumped within this broad definition of this taxon. Here we re-describe newly collected material that matches the original description of Alcyonium purpureum Hickson (= Alcyonium fallax Lüttschwager ) and Thomson’s (1910) later more detailed description of that species. Some of our material was collected from a site very close to the type locality in Mossel Bay.

T. fallax n. comb. forms encrusting to lobate colonies in which the polyps arise from a membranous base and are fused together along their lengths to form a more-or-less homogeneous mass ( Fig. 13b, c View FIGURE 13 ). The polyps are prominent, and remain oriented vertically with their oral surfaces facing upwards, even when retracted. There is little colony coenenchyme between neighboring polyps, with the result that in those polyps that are located on the periphery of the colony the entire length of the polyp body remains visible and distinguishable from its neighbors. When fully retracted the polyps remain visible as coenenchymal mounds. Colonies range from encrusting, a few mm thick, to erect forms> 3 cm tall with multiple lobes. They often grow attached to other organisms such as worm tubes or bivalve shells.

The polyp sclerites are robust spindles and slightly clubbed forms, 0.16–0.25 mm long, with complex tubercles ( Fig. 15a View FIGURE 15 ), and torch-like clubs, 0.13–0.22 mm long, with asymmetrical heads of smooth, spinose processes ( Fig. 15b View FIGURE 15 ). They are arranged in eight longitudinal tracts in the base of the polyp and extend distally to form points at the bases of the tentacles. A collaret of transverse sclerites is lacking. The tentacles have smooth, flat, antler-like rods, 0.12–0.18 mm long ( Fig. 15c View FIGURE 15 ). In the surface of the polyparium and base of the colony there are radiates, 0.06–0.11 mm long, and tuberculate spheroids, 0.08–0.13 mm long ( Fig. 15d View FIGURE 15 ), in addition to the same types of spindles and clubs found in the polyps. As one moves from the base of a polyp to the base of the colony the proportion of sclerite types shifts gradually from predominantly spindles and clubs to predominantly radiates and spheroids, but there is no sharp demarcation in sclerite form between different anatomical regions. The colony interior contains mostly spheres and radiates of the same sizes and shapes as those found in the surface of the base ( Fig. 16 View FIGURE 16 ).

Remarks. Hickson (1904) first described Alcyonium purpureum non Lamarck, a bright purple colony collected from the jetty at Mossel Bay. Thomson (1910) subsequently identified this same species in his material. Thomson’s description and illustration of A. purpureum Hickson best matches the specimens described here: colonies consisting of a number of lobes arising from an encrusting membrane; sclerite forms are mostly clubs, spindles, tuberculate spheres and "double spheres", similar in all parts of the colony; spindles arranged in eight parallel bands and irregularly en chevron in the polyps; some radiates (“double clubs”) in the colony base; color in life due to a soluble purple pigment. From this description we conclude that our material corresponds to Thomson’s A. purpureum Hickson. Lüttschwager (1922) recognized that the name A. purpureum used by Hickson was preoccupied by a species from Australia ( A. purpureum Linnaeus ), and re-named the South African species Alcyonium fallax nom. nov.

In the same paper in which he identified purple, lobate colonies as A. purpureum Hickson, Thomson (1910) described Alcyonium fauri , a brown, encrusting colony that lacks sclerites in the polyps and colony interior, and has only “double wheels” in the colony surface. From his illustrations these sclerites appear to be compact radiates or spheroids with sparse ornamentation and a median waist. Based on examination of material collected by Carlgren (and apparently not the material of Thomson), Broch (1939) concluded that there was wide variation in the degree of polyp armature and presence of interior sclerites among specimens, and consequently synonymized A. fauri with A. fallax , the former name taking precedence. Williams (1992a) accepted Broch’s conclusion that A. fauri and A. purpureum Hickson (= A. fallax Lüttschwager ) are synonyms, but he also does not appear to have examined the material of Thomson. Thomson's original material was also unavailable to us for examination, but based on his illustrations and detailed descriptions, we disagree that these two forms are synonymous, and retain the species name fallax for material that fits the description given above. Thomson’s (1910) description of A. fauri does not closely match any species recorded subsequently from South Africa with the possible exception of Porphyrophyton distinctum n. comb. (see remarks above for that species).

Although Williams (1992a) illustrated the range of variation in polyp armature and sclerite form he observed among three colonies he examined, he did not indicate which specimens were illustrated or which sclerite variants came from which colony. The absence of such information makes it impossible to determine if any of the specimens he included within A. fauri sensu lato match those we recognize here as different species. The colony forms he illustrates in Figs. 1B View FIGURE 1 , 13B, and 13E View FIGURE 13 , and the polyp armature depicted in Fig. 14A View FIGURE 14 most closely match T. fallax n. comb. 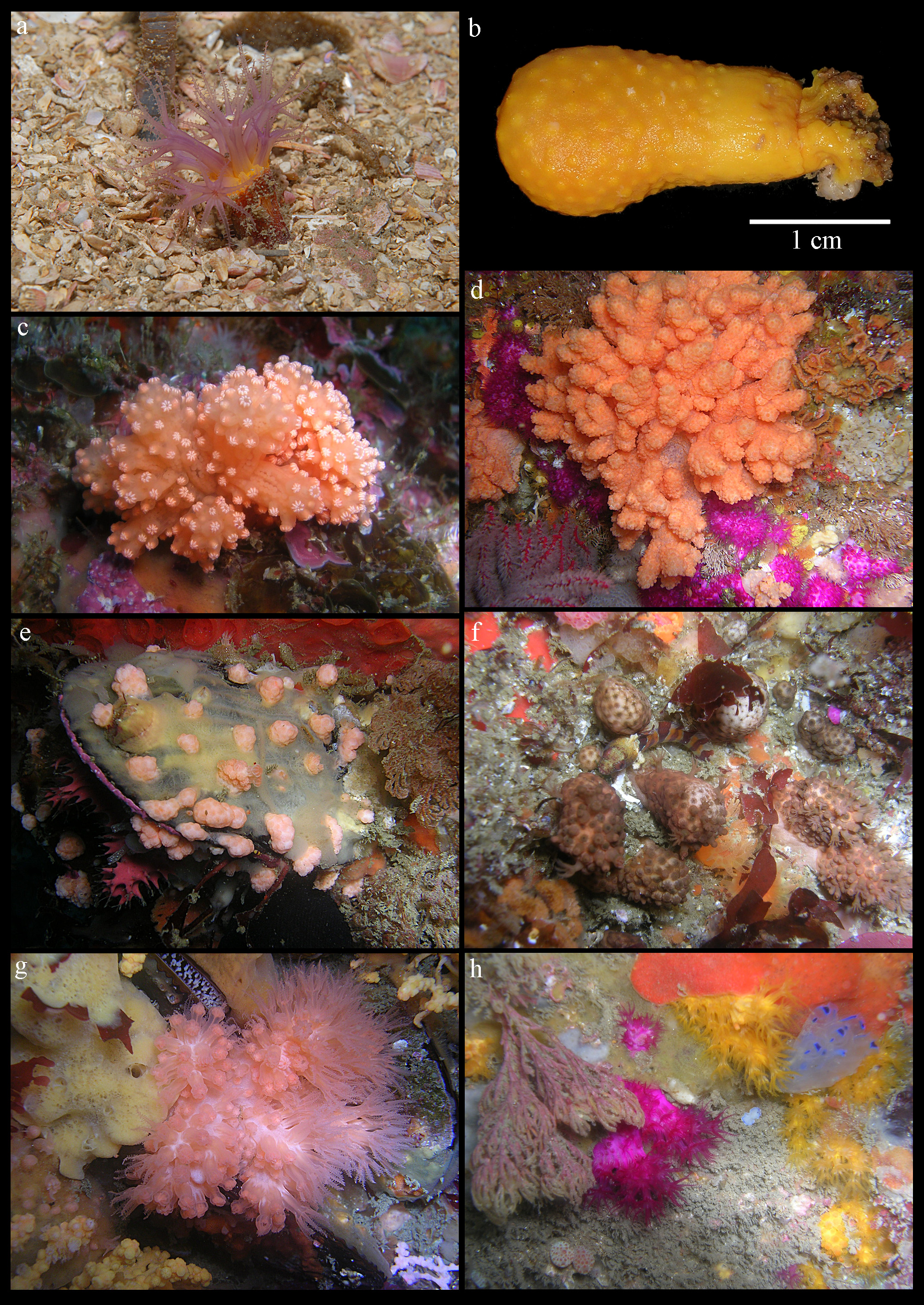 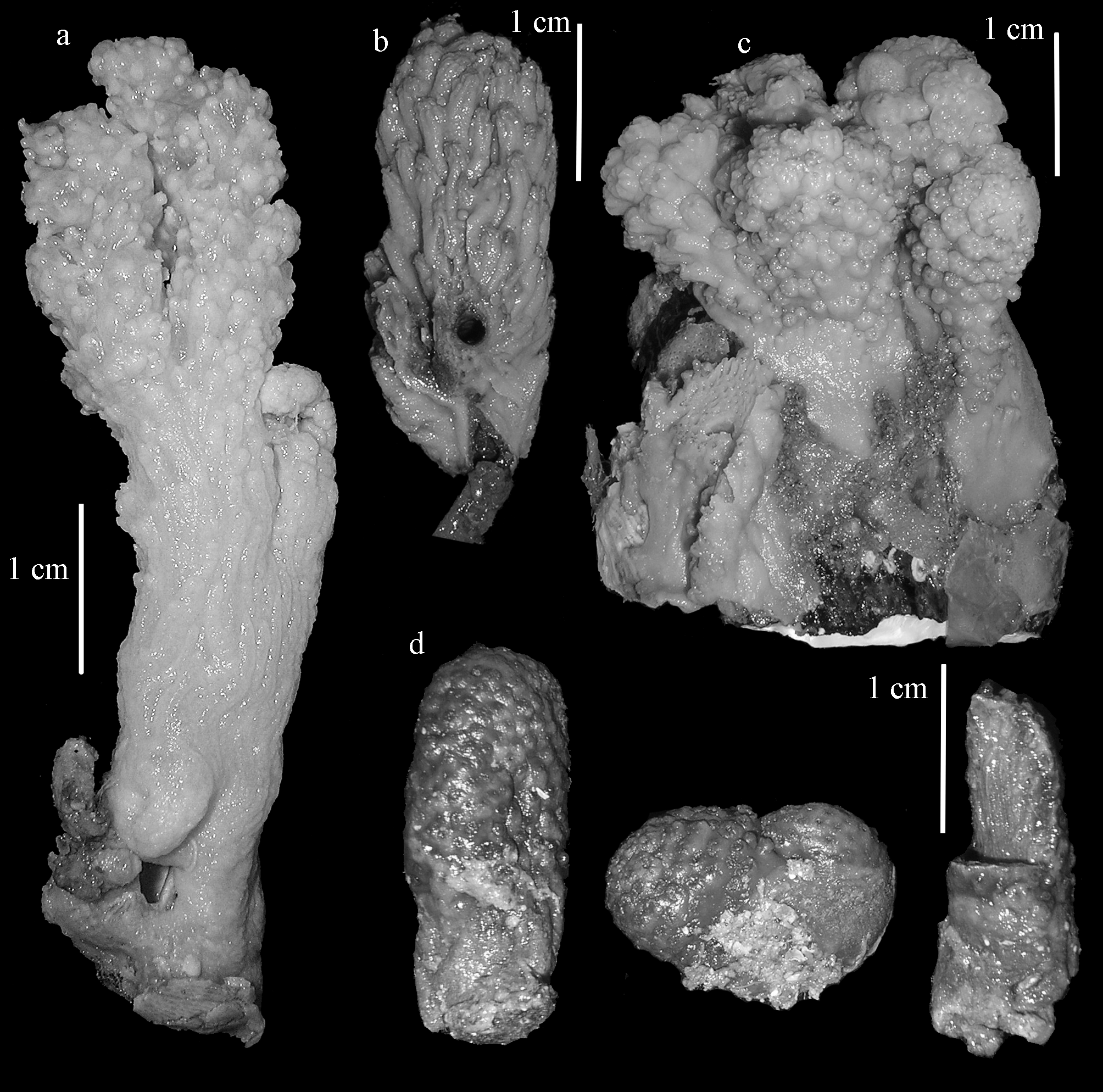