Description. The holotype is a firm, club-shaped colony, 4.0 cm tall ( Fig. 5b View FIGURE 5 ). The stalk is 1.5 cm long and 1.2 cm in diameter at its widest point, and is smooth except for a few small bumps and longitudinal wrinkles. The polyparium is smooth and bulbous, 1.8 cm in diameter at its widest point near the distal end. The stalk and polyparium are demarcated only by the presence of polyps in the latter, and by a slight difference in color. Polyps are distributed regularly over the surface of the polyparium, spaced about 1 mm apart. The polyps are retracted flush with the colony surface, but remain visible as small, pale bumps.

Color. Golden yellow with a paler yellow stalk and white polyps. The sclerites are colored, mostly yellow with a few red spindles in the colony interior. Azooxanthellate.

Etymology. From the Latin dolium , a cask or tun, in reference to the barrel-shaped sclerites in the surface of the stalk.

Remarks. A. dolium n. sp. is superficially very similar to the yellow color morph of Alcyonium variabile (Thomson) (Williams 1986b). It can be distinguished from that species by differences in the colony growth form, which in A. dolium n. sp. is clavate without a strong distinction between stalk and polyparium, while A. variabile is typically capitate, with a strongly demarcated stalk and polyparium. The form of the sclerites in the surface and interior of the stalk differs, with A. variable having radiates while A. dolium n. sp. has barrels and spheroids with a median waist. The clubs in the polyparium surface also differ in shape from those of A. variabile . These distinctions can be seen by comparing Fig. 7 View FIGURE7 to Fig. 8 View FIGURE 8 , which depicts the sclerites typically found in A. variabile . Phylogenetic analyses place A. dolium n. sp. as a very close sister taxon to A. variabile ( Fig. 1 View FIGURE 1 ) but slightly differentiated from it genetically at all of the loci we sequenced. Pairwise genetic distances (K2p) between the two species were 0.4–0.6% at mtMutS, 0.1% at COI, and 1.5–1.7% at 28S rDNA.

A. compactofestucum Verseveldt & Ofwegen differs from both A. dolium n. sp. and A. variabile by the unique shape of the sclerites in the stalk interior, which are spindles with long, oblique spinose processes (Verseveldt & Ofwegen 1992: Fig. 6 View FIGURE 6 , r–t) rather than spheroids, barrels or radiates. Likewise, A. studeri (Thomson) can be distinguished from each of these other similar species by the presence of needle-like spindles in the interior of the stalk.

Thomson (1921) identified as A. sarcophytoides (non Burchardt) a specimen he described as “irregularly cylindrical in shape and yellow in color,” with a distinct stalk and polyparium, and sclerites of a form he termed “Zwirnrollen” (spools). Williams (1992a) reported, however, that this specimen has long, slender spindles in the surface of the polyparium, a character that would distinguish it from A. dolium n. sp. Neither author, however, gives any illustrations of the colony or its sclerites, and we were unable to examine the specimen.

A. dolium n. sp. occurs syntopically with Parasphaerasclera aurea (Benayahu & Schleyer) , which shares a similar golden-yellow color and unbranched growth form. Colonies of P. aurea are, however, digitiform rather than clavate, and typically have a shorter stalk, the polyps lack sclerites, and the only sclerite forms present in the colony surface and interior are tuberculate spheroids and radiates (McFadden & Ofwegen 2013).

In addition to the four very similar species discussed above, the only other South African species that appears to belong to Alcyonium sensu stricto is A. elegans (Kükenthal) . A. elegans has an unbranched colony form with polyps restricted to the distal end of a broad and compressed sterile stalk. Like other Alcyonium species (McFadden & Ofwegen 2013) it has spindles arranged to form a collaret and points in the polyp, radiates in the colony surface, both radiates and slender spindles in the interior coenenchyme, and the sclerites are permanently colored (Williams 1992a). Attempts to obtain DNA sequences from specimen SAM H3802 were unsuccessful, so at present we cannot confirm this species' status as a member of Alcyonium sensu stricto.

Several other South African species that are currently placed in Alcyonium do not, however, share the characters of that genus. We reassign A. fauri Thomson, A. distinctum Williams and A. wilsoni (Thomson) to other genera below. The correct generic placement of A. foliatum Thomson , a membranous species with foliate clubs in the coenenchyme, is not clear at present, but it does not appear to belong to Alcyonium sensu stricto. Attempts to sequence specimen SAM H3690 failed. Williams (1992a) discussed six additional species of Alcyonium that have been reported from South African waters, but whose occurrence and identity remain unverified.

Other Alcyoniidae . Four additional genera endemic to South Africa are currently assigned to family Alcyoniidae . These include the monotypic Dimorphophyton mutabiliforme Williams , Lanthanocephalus clandestinus Williams & Starmer and Malacacanthus capensis Hickson , and two species of Verseveldtia Williams. Phylogenetic analysis of a 28S rDNA sequence obtained from an uncatalogued specimen from SAM (SAF492) suggests that Dimorphophyton belongs not to Alcyoniidae but rather to Paralcyoniidae , where it is a sister taxon to Studeriotes and [ Paralcyonium + Ceeceenus ] ( Fig. 1 View FIGURE 1 ). Like these other genera, Dimorphophyton has a colony form consisting of a distinct, stout pedicel into which the fleshy polyparium or trunk can be partially or completely retracted. The simple, irregular rod-like sclerites of Dimorphophyton are also similar in form to those found in the polyps and trunk of other paralcyoniid genera (e.g., Ofwegen & Benayahu 2006), but it differs from them in lacking supporting spindles in the pedicel. Based on the molecular phylogenetic result and these morphological similarities, we hereby re-assign Dimorphophyton to Paralcyoniidae .

Among the other three endemic genera assigned to Alcyoniidae , molecular data are available only for Malacacanthus capensis . This species occupies a unique phylogenetic position in the Holaxonia-Alcyoniina clade of octocorals, not closely related to any other genus of Alcyoniidae (or any other family) for which sequence data are available ( Fig. 1 View FIGURE 1 ). Better phylogenetic resolution of the basal relationships within the Holaxonia-Alcyoniina clade is needed, however, to determine if Malacacanthus merits assignment to a monotypic family. Although Lanthanocephalus and Verseveldtia are unlike any other members of Alcyoniidae , molecular phylogenetic datanot currently available for either genus—will be necessary to confirm their familial placement. Lanthanocephalus resembles Malacacanthus most closely in colony growth form, but unlike that genus it has sclerites (spindles and radiates) in the colony surface (Williams & Starmer 2000). The sclerites of Verseveldtia are permanently colored spheroids and radiates similar in form to those found in family Parasphaerascleridae , but it differs from Parasphaerasclera in having dimorphic polyps and sclerites in the autozooids (Williams 1990). 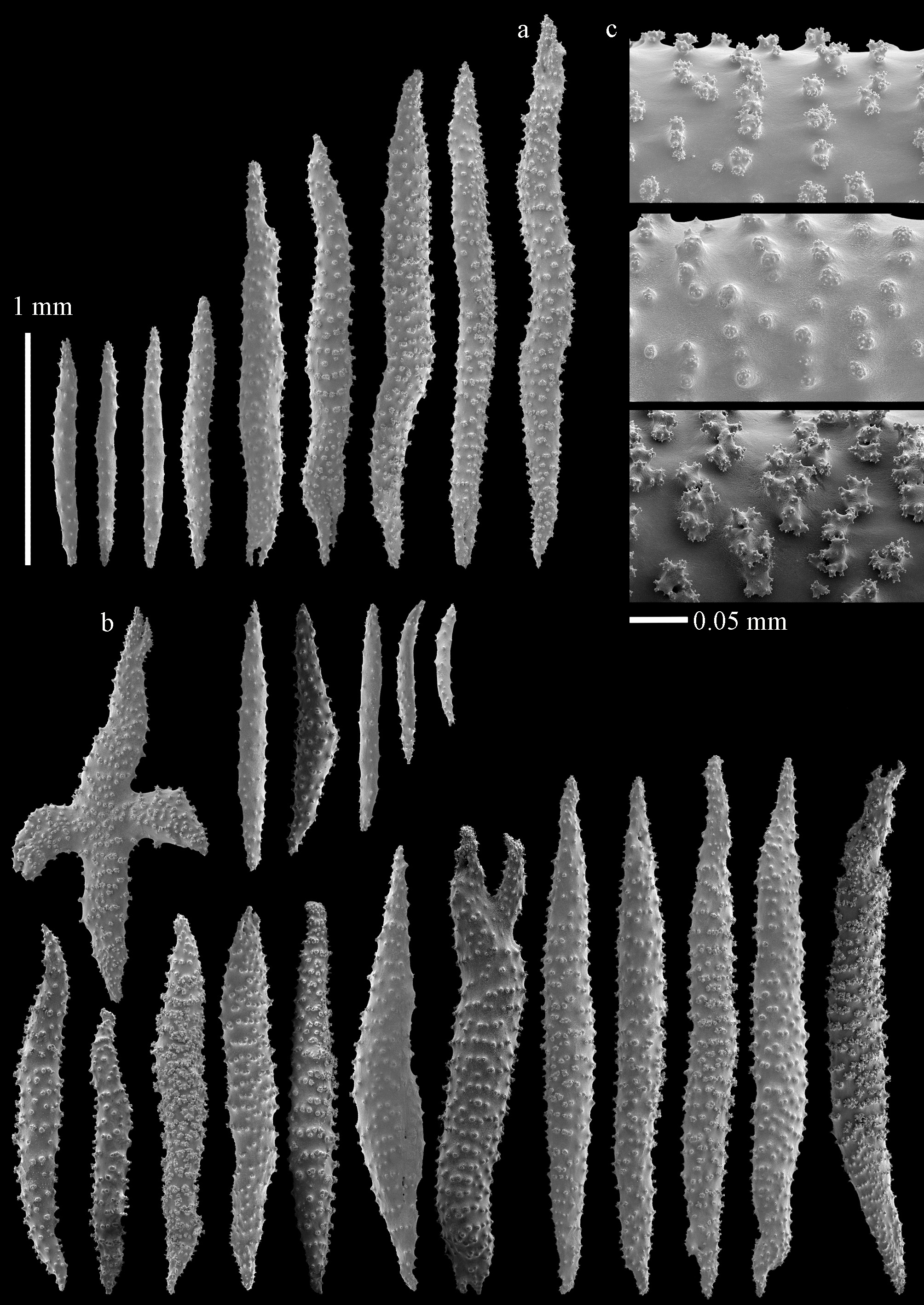 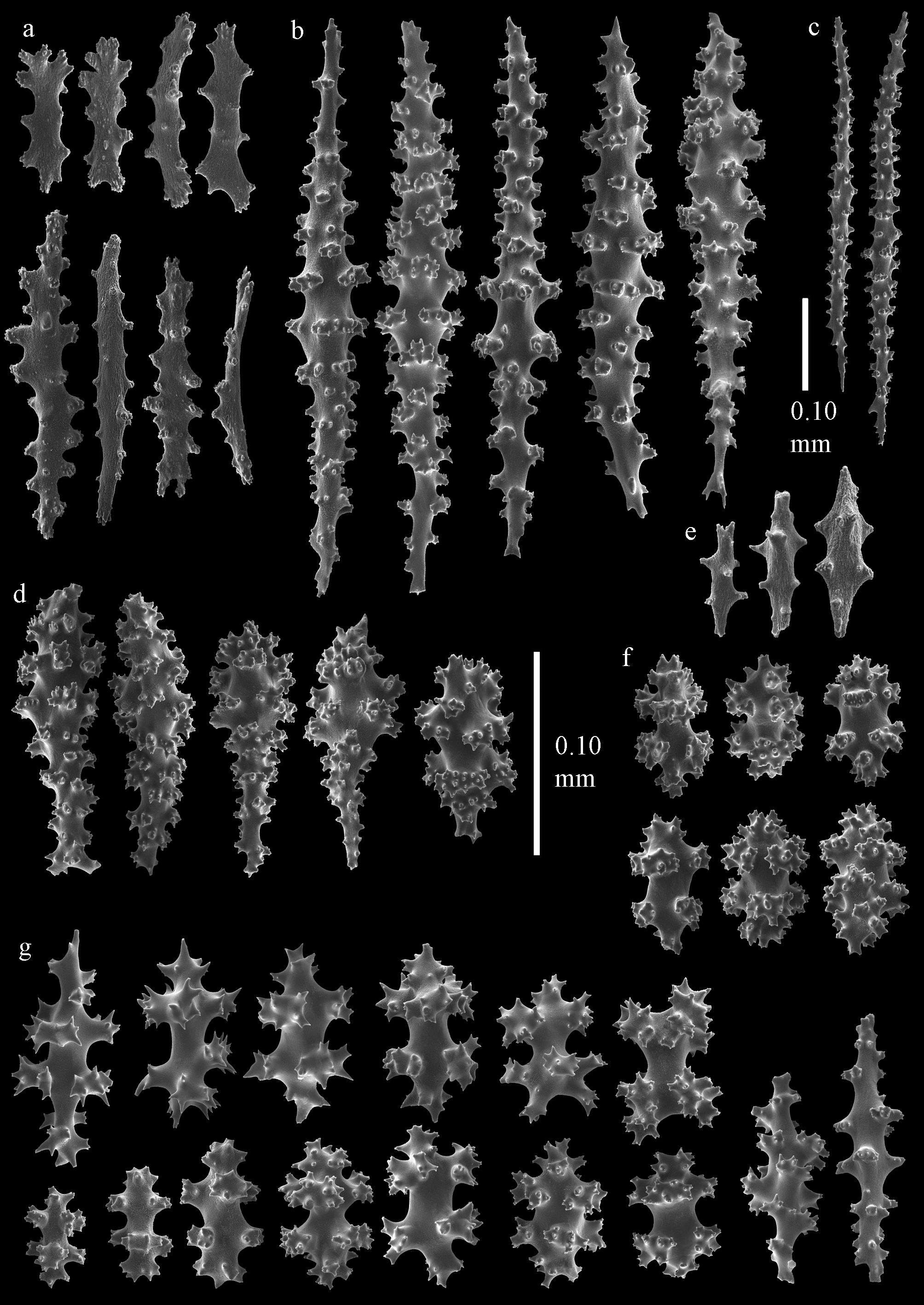 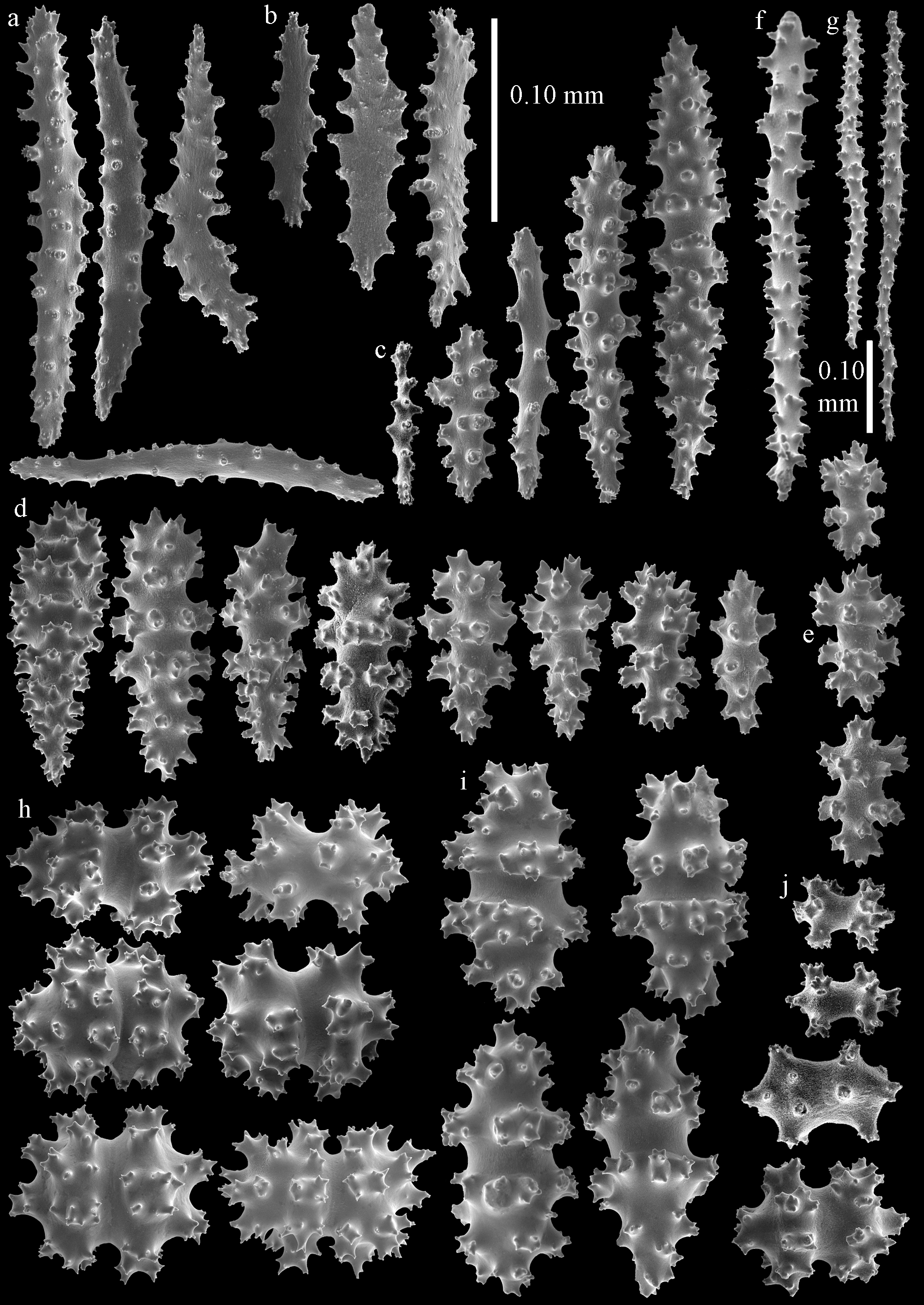