Remarks. The three Panamanian specimens agree very well with the type series of T. toro   , as described and illustrated by Anker (2010a). The variation in the position of the carapacial teeth seems to be minimal (cf. Figs. 9 View FIGURE 9 , 10 View FIGURE 10 ; Anker 2010a: figs. 1, 2B, 10A). Interestingly, the species is known with certainty only from Bocas del Toro in Panama ( Isla Colón, Isla San Cristobal, Isla Popa and Isla Bastimentos), where it inhabits subtidal sand flats with abundant rubble and sea grass, often near mangroves, at depths ranging from 1 to 7 m ( Anker 2010a; present study).

The specimen from Sisal, Mexico, herein tentatively identified as T. cf. toro   differs in some aspects from the holotype of T. toro   , for instance, in the development of the conical anteromesial tubercle on the eyestalks, which seems to be much smaller in the former specimen and not visible in lateral view (cf. Fig. 11 View FIGURE 11 ; Anker 2010a: fig. 2B; this tubercle being also clearly visible in the close-up views of the cephalic region in Figs. 9B View FIGURE 9 , 10B View FIGURE 10 ). The Mexican specimen also has three pairs of very robust cuspidate setae inserted at approximately 0.3, 0.5 and 0.7 of the telson length, respectively (Dr. Sammy De Grave, pers. comm.). However, the presence of additional cuspidate setae, as well as additional posterior spiniform setae on the telson might be an aberrant condition, which is occasionally also seen in other genera, especially in Synalpheus Spence Bate, 1888   (e.g., Banner & Banner 1978, 1979; A. Anker, pers. obs.). Most of the other morphological characters of the Mexican specimen seem to be congruent with the description of T. toro in Anker (2010a)   . Most importantly, in the specimen from Sisal, the mid-dorsal tooth is situated at about half of the carapace length, whilst the lateral teeth arise in the hepatic area, well below and well more anterior relative to the mid-dorsal tooth ( Fig. 11 View FIGURE 11 ), exactly as in the holotype and the topotypical specimens of T. toro   reported above ( Anker 2010a: fig. 2A, B; see also Figs. 9 View FIGURE 9 , 10 View FIGURE 10 ). Furthermore, in the specimen from Sisal, the postorbital margin margin is broadly rounded, without any trace of orbital teeth ( Fig. 11 View FIGURE 11 ), as in T. toro   ( Anker 2010a: fig. 2A, B). On the other hand, the general shape of the rostrum and the size of cornea of the Mexican specimen appear to be more like those of T. alacranes   .

With only three specimens of Triacanthoneus   from the southern Gulf of Mexico and Cuba presently available, i.e. the holotype of T. alacranes   from Alacranes Reef, the specimen from Sisal herein assigned to T. cf. toro   , and the specimen from Isla de la Juventud identified as T. alacranes ( De Grave et al. 2017)   , it is difficult to make more firm conclusions about the the above observed morphological differences. In the present study, they are considered as part of intraspecific variation within T. alacranes   and T. toro   , awaiting a thorough morphological + molecular analysis of this material and eventually, collection of new material. 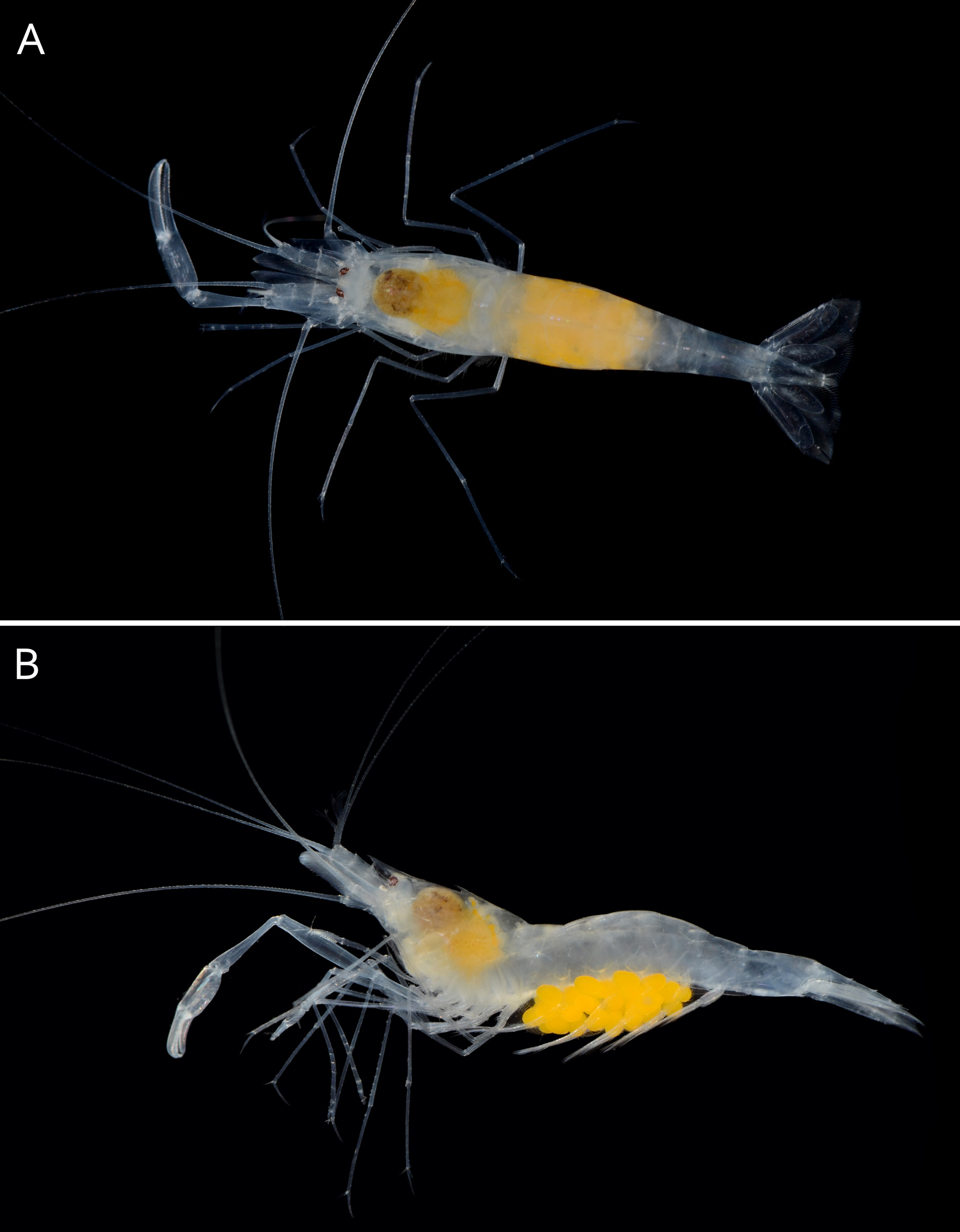