Diagnosis. Grapholita thermopsidis   can be separated from all other Nearctic Grapholitini by the following combination of forewing characters: dorsal strigula white and undivided; ocellus bordered laterally by iridescent pale purple scales and containing four faint longitudinal black lines; and costal strigulae becoming iridescent bluepurple along longitudinal axis. The genitalia are consistent with members of the Nearctic jungiella -group (see Harrison et al. 2014). The shape of the sterigma separates it from all Nearctic Grapholita   except G. eclipsana (Zeller)   . From G. eclipsana   it differs in having a broader band-like lamella antevaginalis. Distinguishing male genitalia of this group relies heavily on the size, shape, number, and placement of cornuti, which we were unfortunately unable to carefully examine in this new species as the phallus was lost prior to examination by KAA and the initial photograph of it from 2017 is very blurry. Grapholita thermopsidis   is the only described species of Grapholita   known to feed on Thermopsis   (but see Comments below).

Abdomen: Vestiture of abdomen with dorsum glossy lead gray, ventral surface concolorous but with wide row of white scales on apical portion of segments. Remnants of hair pencil (“coremata” sensu Komai) between A8 and A9 appear to be present, but abdominal pelt of sole male specimen badly mangled making confirmation difficult.

Biology. Leaf-mining larvae were collected on 5 and 7 July. Typical mines resemble the “underside tentiform” mines of lithocolletine gracillariids, formed along one side of the leaflet midrib and causing the leaflet to buckle ( Figs. 31–35 View FIGURES 30–41 ). The loosened lower epidermis is pale brown and finely wrinkled, with a hole at one end from which the frass is expelled. The upper epidermis is green in younger mines, becoming mottled with whitish or brown as the parenchyma is consumed. Some mines are formed on the upper surface (CSE2322), and these cross the midrib in both photographed examples ( Figs. 36–37 View FIGURES 30–41 ). By 15 July, captive larvae were beginning to exit their mines and spin extensive webbing on one leaf surface, causing the leaflet to curl or fold ( Figs. 38–39 View FIGURES 30–41 ). Feeding continued within the resulting shelter. Fresh leaves were added to the rearing vials as the original ones deteriorated, and the larvae formed new shelters by tying these leaves together. Pupation took place between the tied leaves in early August. Adults emerged the following spring, 4–5 weeks after being removed from refrigeration ( Figs. 40–41 View FIGURES 30–41 ). Given that this would have occurred much later under natural conditions, it is likely that this species is univoltine.

Parasitoids. Four adults of Zagrammosoma mirum Girault   ( Hymenoptera   : Eulophidae   ) emerged on 21 and 22 July 2015 from both upper and lower surface mines collected on 7 July (CSE1769, UCR). Two adults of an undetermined species of Dolichogenidea Viereck   ( Hymenoptera   : Braconidae   ) emerged on 21 and 25 July from lower surface mines, and a third was found dead on 5 August (CSE1778, CNC).

Comments. Following Komai (1999), Grapholita thermopsidis   belongs to the jungiella -group of subgenus Grapholita   based on larval host preference ( Fabaceae   ), forewing pattern and coloration, and the female colliculum possessing a “sclerotized ring bearing minute thorns”. However, we did not observe the small “darkly pigmented sclerite situated anterodorsal to ventral prolegs on A2–A6” apparently present in larvae of Palearctic members of the jungiella -group. The dissection of the only known male of G. thermopsidis   was performed prior to KAA examining the specimen and unfortunately the phallus was lost shortly after. Harrison et al. (2014) listed Nearctic members of the jungiella -group. In addition to G. thermopsidis   , we also propose including G. boulderana McDunnough   in this group based on identical forewing pattern to that of G. orbexilana Harrison   , its possible sister species in the east.

To our knowledge this is the first record of leafmining in Grapholita   . Two other North American grapholitines are known to mine leaves, in addition to Talponia plummeriana   (discussed below): Dichrorampha incanana (Clemens)   feeds on Arnoglossum Raf.   and Packera Á.Löve & D.Löve   ( Asteraceae   : Senecioneae) and is a leafminer throughout its development ( Priest 2008; Eiseman 2014a); Ricula maculana (Fernald)   feeds on Schoepfia schreberi J.F.Gmel.   ( Schoepfiaceae   ) and has similar habits to G. thermopsidis— first forming leaf mines from which the frass is expelled, later feeding within tied or folded leaves ( Dyar 1901).

Brown et al. (2008) list Grapholita   “ thermopsae   ” as feeding on Thermopsis macrophylla Hook. & Arn.   in California, citing Powell (2006). BSCIT (2019) lists a specimen of “ Grapholita thermopsae Powell & Sm.   ms” at EME collected by J. Powell on 28 February 1967 at Carson Ridge, Marin Co., California. J. Powell (in litt. to CSE, 31 March 2016) informed us that this manuscript name for an undescribed species was from an aborted collaboration with Norm Smith, then an M.S. student at UC Davis. He did not provide details of the larval biology but doubted that the California species was conspecific with our new species from Colorado. We were unable to examine the EME specimens for this study, as J. Powell (in litt. to KAA, 9 November 2019) was unable to locate any. 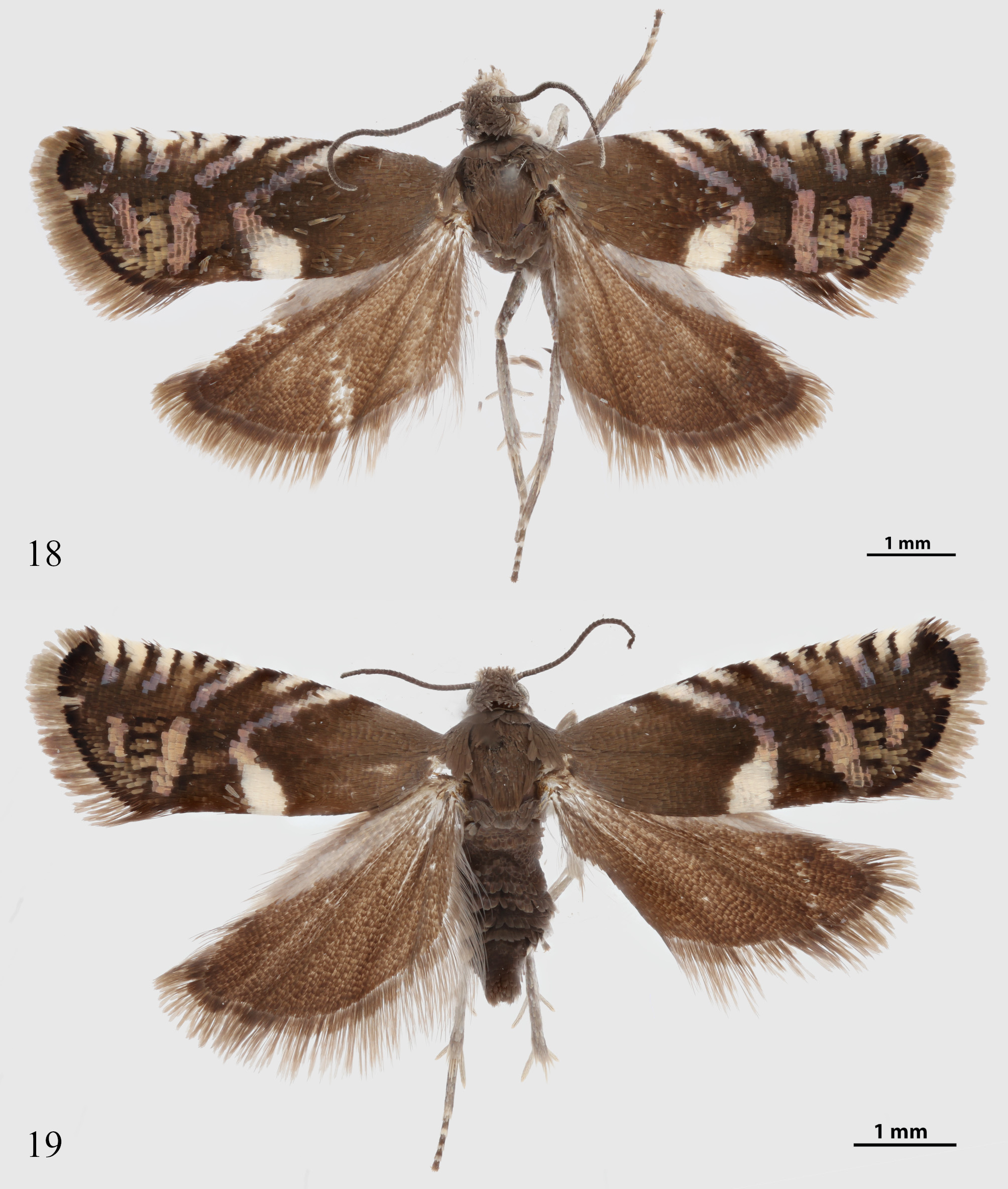 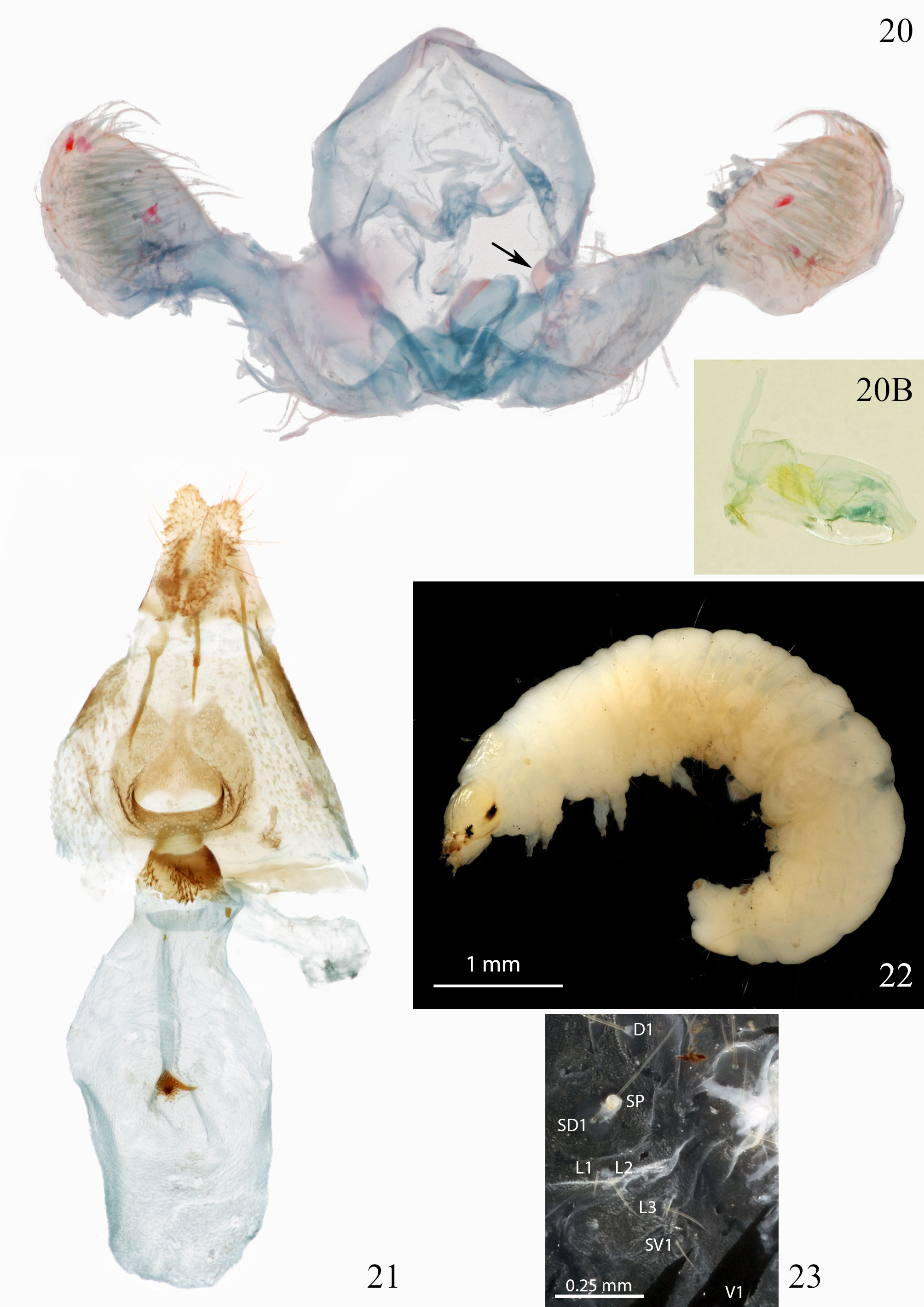 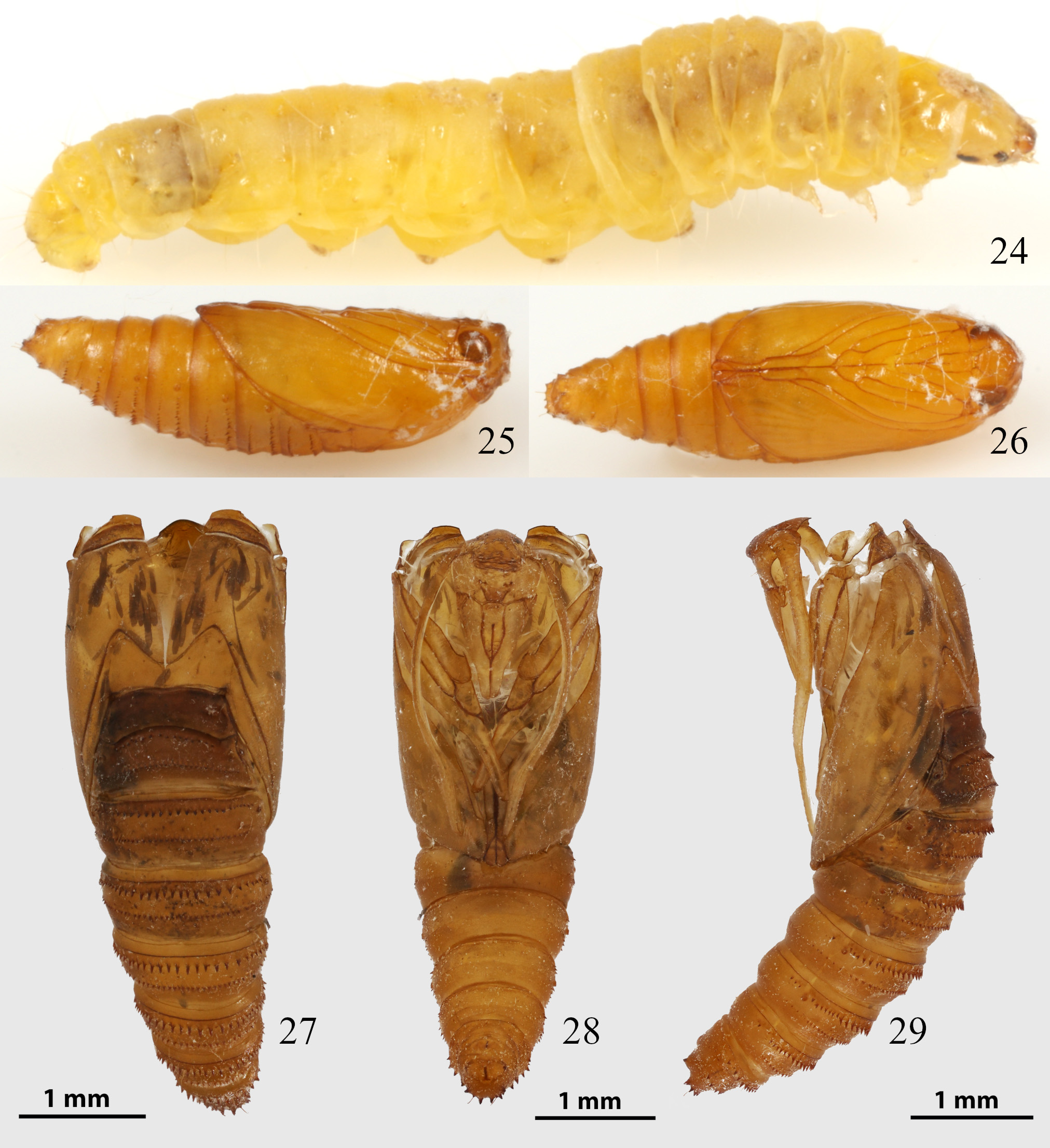 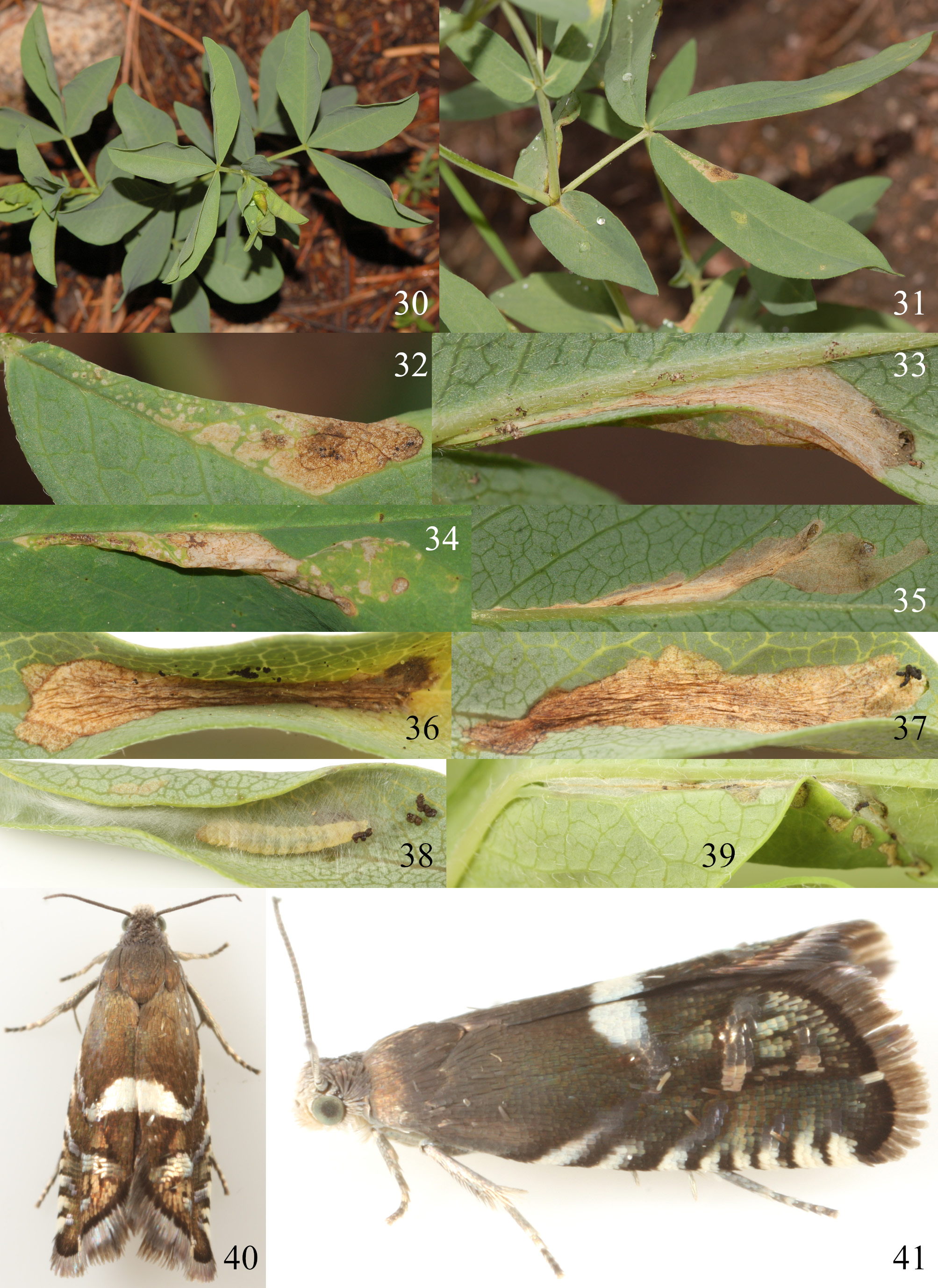