Description: Rostrum ( Fig. 2A, B View FIGURE 2 ) slender and long, 1.7–2.1 times as long as carapace, strongly curved upwards anteriorly, extended beyond the end of antennular peduncle; dorsal margin of rostrum bearing three pairs (Basal, Middle and Distal) in appeared widely spaced teeth with a strong epigastric tooth on middle of the carapace. Basal pair of teeth are larger than other two pairs found in above the orbit, inner margin of teeth is serrated distally, 2 nd tooth slightly larger than 1 st one with a row of 2–3 long plumose setae on rostrum underneath of each tooth ( Fig. 2B View FIGURE 2 ); midrostral pair of teeth are glabrous, set wider apart, without fine serrate on inner margin and two long plumose setae underneath of each tooth; distal pair teeth glabrous, spinose, with row of long plumose setae and most posterior teeth set slightly above between level of midrostral pair of dorsal one, last ventral tooth situated posteriorly to distal pair of dorsal teeth, terminally sharp and spinose.

Carapace glabrous, laterally compressed, well developed antennal spine with well-produced orbital angle. Branchiostegal spine is prominent and smaller than the antennal spine, which is situated slightly in back of the anterior margin of carapace, pterygostomine region is rounded. Eyes are large with the globular shaped cornea, eyestalk looks bulbous, eyestalk and cornea were separated by a groove ( Fig. 2C View FIGURE 2 ).

Coloration in life: Carapace and abdomen ( Fig. 5 View FIGURE 5 ) translucent with sparsely scattered bright red and whitish spots, one white dot in posterior-dorsally and two dots in lateral sides of carapace, fifth and sixth abdominal somites almost fully translucent without spots. Dorso-posterior end of third abdominal tergites contains two red bars. Rostrum white in colour with red band sub-terminally, dorsal-ventral marginal teeth pale red. Antennule and antennular flagellum are dark red. Antennal scale is transparent with margin red in colour. Eyestalk with translucent, cornea with semi-transparent or ash in colour with dark spots dorsally. First and second pereopods almost white or translucent; bases of palm, carpus with a red coloured band; fingers are white; merus and ischium contain scattered red dots. Third to fifth pereopods of dactylus, propodus white with small red dots; carpus distally with red band, merus and ischium white or transparent with red dots dorsally. Pleopods are translucent with outer margin reddish. Midlateral spine of 4 th and 5 th abdomens are reddish. The base of uropods and telson has a red colour band with white dots, continues with a red dot on each of the uropod and reddish in posterio-distally.

These shrimps were occurred in the shallow waters at Agatti Island, however they are frequently noticed in the bottom curve of the coral boulder. Aggregation of these shrimps were mostly in the bottom of dead coral, where light penetration is very low, darkening area and so the species is may be a free-living browser. Also, we observed that most of the specimens are matured and berried females (eggs are eye stalked), which indicates, the bottom region serve as shelter and schooling place.

In the sampling site 2, 85% of U. arabianensis   n. sp. with Doryrhamphus   sp were observed. They were collect- ed from the bottom of the coral, Montipora   , Coeloseris   , Symphyllia   , where salinity and temperature were noticed, 36 ppt and 28˚C respectively. The co-occurred species are L. kasmira   , A. vaiiginensis   , T. janseni   , and T. janseni   .

Etymology: The species is named after the Arabian Sea, where Lakshadweep islands are scattered and 55 specimens of the new species were collected from one among the islands.

The present new species of the genus, Urocaridella   is close relation to U. pulchella   , U. cyrtorhyncha   and also to U. urocaridella   with the structure of rostrum, orientation of the dorsal rostral spination and the postero-dorsal part of the third segment, which is expanded backwards roundly. Among the said three species, the rostrum strongly upcurved and bears larger teeth dorsally (6+1) ( Fujino & Miyake 1969; Chace & Bruce, 1993; Yokes & Galil, 2006). However, U. arabianensis   n. sp. can be differed from other species of the genus by size (length) and the number of dorsal and ventral teeth of the rostrum, size of pereopods, and the relation of 5 th and 6 th abdominal length ( Table 2). Urocaridella arabianensis   n. sp. have rostrum, which is 1.7 to 2.1 times as long as carapace, 10 ventral rostral teeth, carpus of 1 st pereopod is 2.5 times long as palm, carpus of 2 nd pereopod 1.8 times as long as palm, presence of a spine in latero-middle of fourth and fifth abdomens, sixth abdominal segment 2.3 times long as fifth segment. Where, in U. pulchella   , rostrum 1.5 times long as carapace, carpus of the second pereopod 1.5 times long as palm, sixth abdominal segment 2.0 times long as the fifth segment. U. cyrtorhyncha   differed by presences of 9 ventral teeth in rostrum, carpus longer than the palm of first pereopod (1.5 times), propodus of pereopod 3 rd to 5 th are 7 times as long as the dactylus ( Fujino & Miyake, 1969; Prakash & Baeza, 2018). U. urocaridella   is distinguished by the presence of eight dorsal and 9–11 ventral teeth in rostrum, the propodus of the fifth pereopod 4 times long as dactylus, mandible with well-developed 2-segmented palp ( Chace & Bruce, 1993). U. degravei   differed with presences of 9 ventral rostral teeth, stylocerite falls well behind the middle of the basal segment, carpus of first and second pereopod is about 1.3 times as long as the palm, propodus of the fifth pereopod is about 8.5 times as long as the dactylus. U. antonbruunii   and U. liui   were well distinguished by the presence of triangular hump and triangular cap overhanging strongly produced in postero-dorsal part of the third abdominal segment, respectively. Next, U. vestigialis   varied from the U. arabianensis   n. sp. with the presence of six ventral rostral teeth, 5 th abdominal pleuron strongly acute postero-ventrally; mandible with vestigial palp, propodus of the fifth pereopod is about 5 times as long as the dactylus ( Chace & Bruce, 1993).

Colour patterns are most important taxonomic character for the genus Urocaridella   and are mostly species-specific ( Prakash & Baeza 2018). The colour pattern of Urocaridella arabianensis   n. sp. is similar to U. pulchella   and U. antonbruunii   , where the carapace, rostrum and abdominal region had red and white spots and translucent and two red bars present on the dorsal region of the third abdominal somite. However, U. arabianensis   n. sp. is differed by having red dots on propodus, carpus, merus and ischium of the last three pereopods. The exopods and endopods of the uropods are having lined red and white blotches, which is also similar in U. pulchella   and U. antonbruunii   and red spots in U. urocaridella   . Few specimens of U. arabianensis   n. sp. colour pattern observed that pale red dots on the body and legs and fully transparent on the body ( Fig. 5 View FIGURE 5 ).

Recently, Khalaf & Khalaf (2018) has described a new species Urocaridella renatekhalafae Khalaf in Khalaf & Khalaf, 2018   from the Fujairah and Khorfakkan Sea, East Coast of United Arab Emirates, Gulf of Oman, which was accepted as junior synonym to U. cyrtorhyncha   (WoRMS, 2020). They have described about the colouration and biological characters of the species, however, illustration about the morphological characters are totally lacking. Accordingly, the colour patterns in pereopods, abdomen and telson of U. renatekhalafae   were similar to U. arabianensis   n. sp. But, U. renatekhalafae   is distinguished from U. arabianensis   n. sp. by comprising of fully long white coloured rostrum without sub-terminal red band, antennas and antennules are red in colour with some white dots at the base and carapace with two white dots in posterior-dorsally and four dots in laterally in irregular shape.

Phylogenetic analysis: Seven COI sequences were generated for Urocaridella arabianensis   n. sp. and six of the sequences being identical with one haplotype differing by only one base ( Fig. 7A View FIGURE 7 ). Three sequences of Urocaridella   species retrieved from Genbank and used for phylogenetic study. There were 555 positions in the final dataset. The new species sequences had a monophyletic clade and sister to U. pulchella   ( KY197952 View Materials ) from the Mediterranean Sea (coast of Egypt) with high genetic distance (14.7–15.1%) ( Table 3). U. antonbruunii   ( KY197951 View Materials ) and U. degravei   ( KY197953 View Materials ) were shown far to U. arabianensis   n. sp. with the distance of 19.8–20.02% and 22.6–22.8%, respectively ( Fig. 7A View FIGURE 7 ).

Additionally, the phylogenetic relationships between the new species and other congeners were analyzed using the Maximum Likelihood and Bayesian inference methods with the sequences of 16S rRNA (456 bp),18S rRNA (650 bp) and Histone 3 (295 bp) genes. Sequences of 16S ( Fig. 7B View FIGURE 7 ) gene KC515050 View Materials ( U. pulchella   ), KC515049 View Materials ( U. antonbruunii   ), KP179006 View Materials ( U. cyrtorhyncha   ) sequences showed very low genetic distances (0.0–0.4%) and named as different species which may be missed identified and the similar result was noticed by Prakash & Baeza (2018) also. Phylogeny of 18S and H3 gene sequences also supporting significantly to the new species ( Fig. 8A & B View FIGURE 8 ).

In the concatenated analysis, the combined data matrix contains 24 nucleotide sequences of in-group taxa and 3 sequences of out-group taxa. The combined data set (16S, 18S and H3) was 1430 bp long including 5 indels and an outgroup species ( Fig. 9 View FIGURE 9 ). The in-group taxa have 56 parsimony-informative of 116 variable characters with 61% of A+T base frequency. The tree topology was supported by>80% bootstrap support from the ML analysis and posterior probabilities from the BI analysis for all the nodes, which is similar to individual tree topologies. The three specimens of the U. arabianensis   n. sp. clustered together into a monophyletic clade with U. antonbruunii   , U. cyrtorhyncha   and U. pulchella   . Similarly, Prakash & Baeza (2018) noticed, that misidentification of two sequences of U. pulchella   and U. antonbruunii   from Japan ( Kou et al., 2013) and one sequence of U. cyrtorhyncha   from Singapore ( Carvalho et al., 2016), which found to be a single clade. Accordingly, we conclude that the individuals of U. antonbruunii   ( Japan), U. pulchella   ( Japan) and cyrtorhyncha   ( Singapore) are might be the synonyms of U. arabianensis   n. sp. FIGURE 5. Urocaridella arabianensis n. sp. in live condition (A & B)

FIGURE 5. Urocaridella arabianensis n. sp. in live condition (A & B) 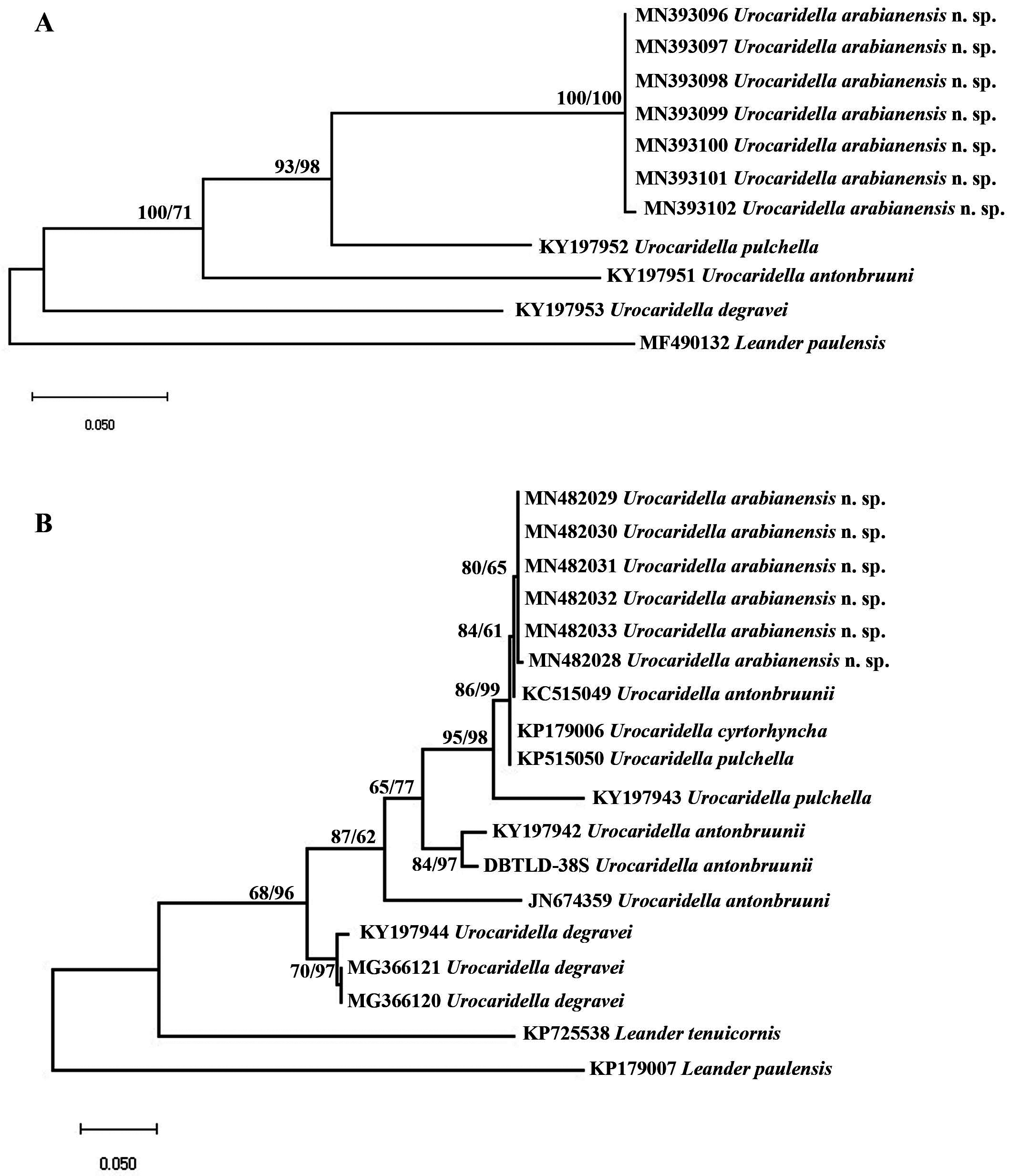