This species was described from Angola, and is found in forests from Liberia to Uganda and southern Sudan. We have not reared this species, but MJWC found and documented caterpillars on a species of Marantaceae  at Entebbe, Uganda, which show clear similarities to those of Gretna  spp., particularly G. carmen Evans  treated in Cock et al. (2014), notably the long hair-like setae covering the head and body, extensive covering of waxy powder on the body and the shape and pale brown ground colour of the head. On the other hand, two emerged pupae found at the same time differ from other Gretna  spp. Based on the collection locality, the only Gretna  spp. likely to be found at Entebbe are G. cylinda  and G. zaremba jacksoni Evans  , and the latter shows affinities with the palm-feeding species. Accordingly, we are rather confident, that the species documented here is G. cylinda  .

Food plants. Vuattoux (1999) reports reared it (as G. cylindrica  ) at Lamto, Côte d’Ivoire: five times on Thalia geniculata  (= T. welwitschii  ), and once each on Trachyphrynium braunianum  and Marantochloa cuspidata  (all Marantaceae  ). Larsen (2005) and Vande weghe (2010) repeat these food plant records. MJWC’s material (90 / 212) was collected on a Marantaceae  (probably Marantochloa  sp.) in a propagation building at the Botanic Gardens, Entebbe.

Leaf shelters. Small caterpillars make a shelter of a slight fold in the leaf in mid-lamina; they are clearly visible under several strands of silk which hold the fold in place. This shelter is reminiscent of that partially documented for the first instar of G. balenge  ( Holland) (Cock et al. 2014, Figure 39View FIGURE 39). Larger caterpillars make a larger fold from the edge of the portion of leaf where they have been feeding. Two emerged pupa were collected; they were found without a shelter on the leaf underside against the mid-rib, suspended by the cremaster and a multi-stranded silk girdle under the anterior part of A 4.

Caterpillars. A small caterpillar probably in instar n- 3 was photographed but not described (Figure 35.1); it appears similar to the penultimate instar described below, except that the white waxy flocculence is much heavier on the head, the colour and markings of which cannot be seen. Preserved n- 3 head capsules measured 1.55 x 1.8mm wide x high (n= 2), while an n- 2 measured 1.8 x 2.1mm. This young caterpillar is reminiscent of the caterpillars of G. balenge  (Cock et al. 2014, Figure 40View FIGURE 40), but much less extreme.

Pupa. None of the caterpillars were reared through to the pupa, but two emerged pupae ( Figure 37View FIGURE 37) were collected with final instar head capsules identical to those documented ( Figure 36View FIGURE 36), so we have no doubt about the association. Emerged pupa at least 20mm long; the proboscis does not extend significantly beyond the wings; cuticle pale brown almost transparent with the segmental junctions darker; a bump on the frons projects about 0.4mm; two tufts of about ten 2.4mm long erect brown setae side by side on bump; similar tufts above with 10–15 setae; ventroanteriorly two more tufts of about 8–10 setae below the ones on the bump; lateral to the frontal bump a much larger clump of similar setae on the anterior part of the eye; long pale, erect setae on dorsum and in two dorsolateral tufts on T 2; similar pale setae on dorsum and laterally on abdomen segments; subdorsally on the abdomen there are curious oval pale brown structures, 1.6 x 0.8mm aligned transversely, which at first sight look like conspicuous spiracles; these are placed on A 1 (1), A 2 –A 3 (2), A 4 –A 6 (1); where two pairs occur on a segment, the anterior ones are placed nearer the dorsum; dorsolateral line of small spots near posterior margin on A 2 –A 7; spiracles brown, inconspicuous; ventral half with layer of white waxy powder.

Discussion. The affinities in morphology of the caterpillar of G. cylinda  with those known for other Gretna  spp. (Cock et al. 2014) have been pointed out. The pupa shows no close affinities with the known Afrotropical species, and the origin and function of the unique subdorsal structures on the abdomen are unknown. The pupation site on the underside of the food plant leaf against the midrib without a shelter is very unusual; it may occur in Hypoleucis ophiusa  as suggested by Larsen (2005) but it has not been documented for any other Afrotropical species. These features, together with the Marantaceae  food plant distinguish this species from the palm-feeding Gretna  spp., supporting the view that they are not congeneric in spite of the similarity of the caterpillars to those of G. carmen  . 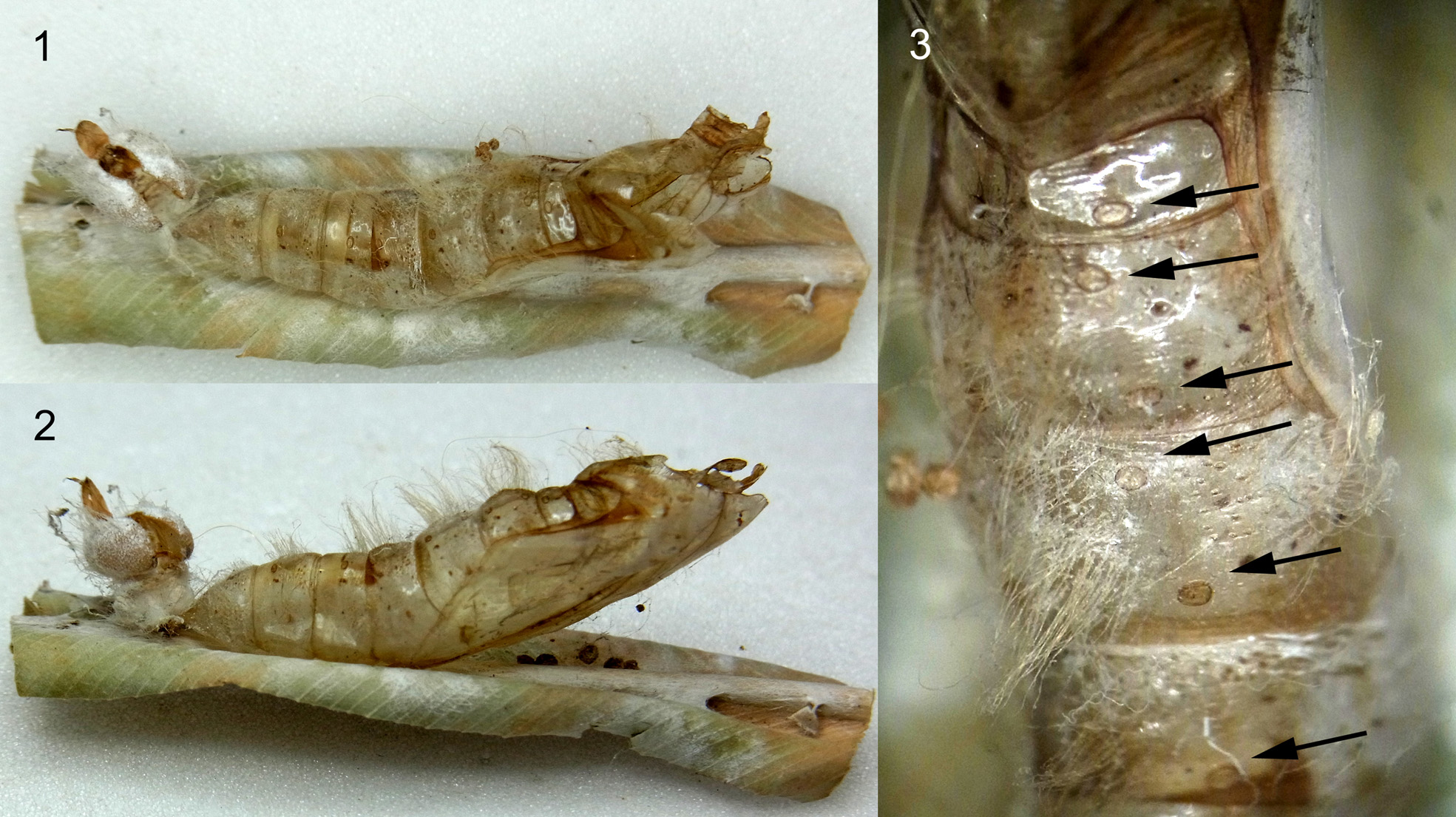 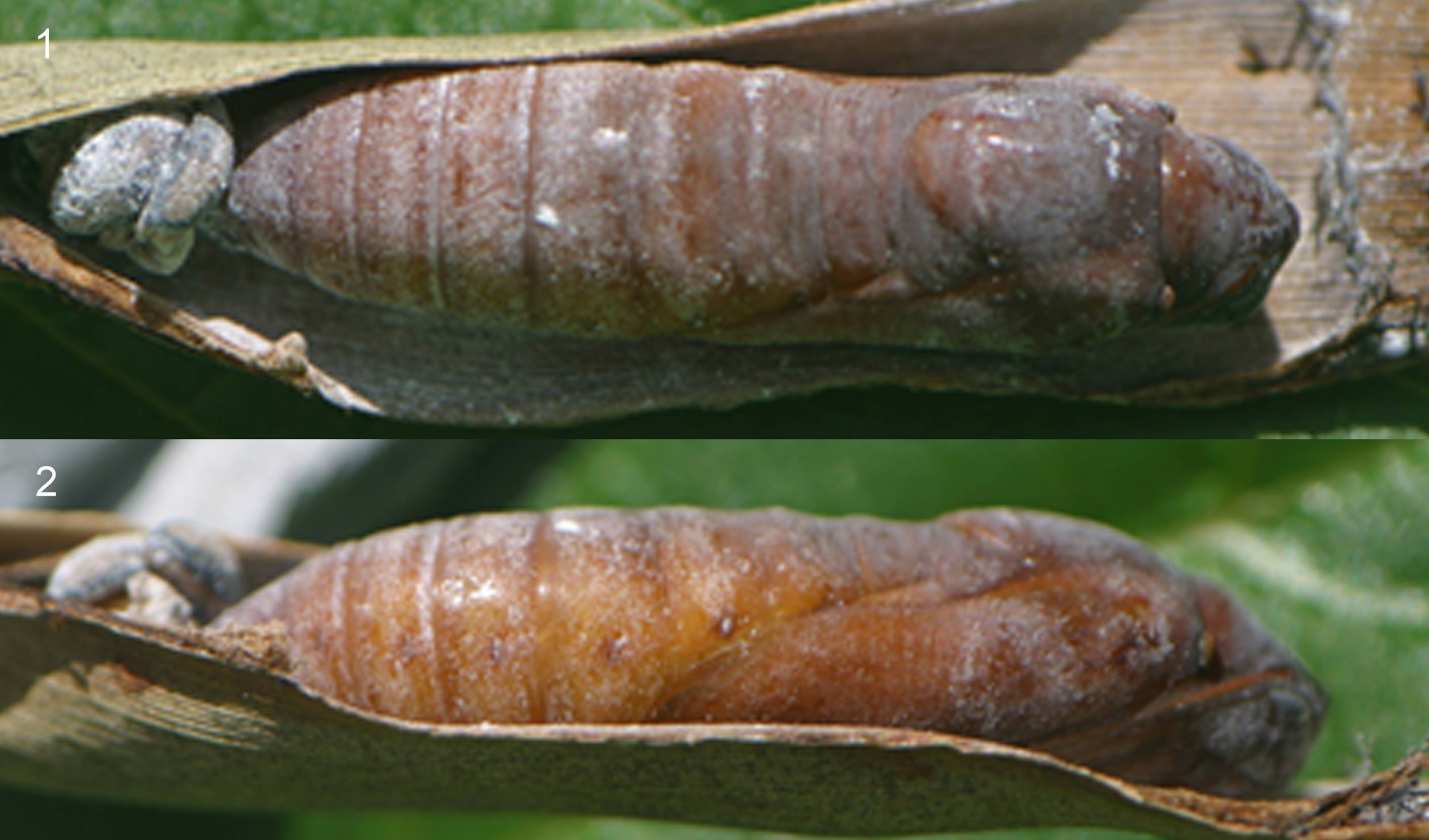