Much of the following background is based on a recent critical literature review of the pest Erionota   spp. by Cock (2015). Erionota torus   ( Figure 2 View FIGURE 2 ) is indigenous in northern India, Nepal, north-eastern India to southern China and Peninsular Malaysia, but it spread to Mauritius around 1968 (reported as E. thrax (Linnaeus))   , southern Japan in 1971, Taiwan in 1986, the southern Philippines probably in the early 1980 s and has just been found in the Western Ghats of India.

Erionota thrax   is well known as the banana skipper of South-East Asia, and as an introduced pest in various Pacific territories. However, applied entomologists mostly overlooked that Evans (1941) described E. torus   , which he differentiated from E. thrax   on male wing shape and genitalia, but having very similar females. Inoué & Kawazoé (1970) illustrate the genitalia of both sexes. Both species occur in mainland South-East Asia and both are common and feed on banana, but only E. thrax   appears in the applied literature. Hence, it is not surprising that when ‘the banana skipper’ appeared in Mauritius, two female specimens sent to the Commonwealth Institute of Entomology were misidentified as E. thrax   . Subsequent material collected in Mauritius and deposited in The Natural History Museum, London, as E. thrax   includes two males and a female collected by P.M.H. Davis at Black River in 1979, and reported in Davis & Barnes (1991), all of which are E. torus   , leading to the conclusion that unless fresh collections can show that both species are present, only E. torus   actually occurs in Mauritius (Cock 2015).

Biological control in Mauritius. Waterhouse & Norris (1989) provide a detailed review of the implementation of successful biological control against E. torus   (as E. thrax   ) in Mauritius ( Monty 1977) and E. thrax   in the Pacific. There are numerous natural enemies in the indigenous range of E. thrax   and E. torus   , and several have been considered for use as biological control agents ( Waterhouse & Norris 1989, Cock 2015). Selected parasitoids of E. thrax   in Sabah were sent to Mauritius in 1971–1973 and a larval parasitoid Cotesia erionotae (Wilkinson)   (= Apanteles erionotae   , Braconidae   ), and egg parasitoid Ooencyrtus pallidipes (Ashmead)   (= O. erionotae Ferrière   , Encyrtidae   ) became established. These parasitoids quickly provided effective biological control. In 1975 a cyclone severely damaged banana plants and drastically reduced banana skipper and parasitoid populations but nevertheless the banana skipper population built up again in 1976. None of the parasites established earlier was recovered in the two years following the cyclone, but damage to banana by the skipper was recorded as being very low in 1978 and it remained uncommon thereafter. Davis & Barnes (1991) report that specimens of E. torus   (as E. thrax   ) were taken on the west coast of Mauritius in 1979, but it was not seen elsewhere between the years 1976 and 1980, so that its status was considered unclear. ABRI collectors found early stages in 2014, so E. torus   continues as an uncommon species of no significant pest status in Mauritius, almost certainly kept under effective biological control by its introduced parasitoids. None of the other species of Hesperiidae   found on Mauritius are known to be parasitized by the parasitoid species introduced against E. torus   (J. Monty pers. comm. 1987 in Waterhouse & Norris 1989).

Food plants. Cock (2015) has reviewed the literature on food plants of Erionota   spp. and found considerable confusion and indications of errors. The early stages of E. thrax   and E. torus   cannot be distinguished, and they are both common pests of Musa   spp. Because there has been confusion between E. thrax   and E. torus   where the two co-occur in mainland South-East Asia, food plant records without voucher specimens can only be accepted for E. torus   with full confidence where E. thrax   does not occur. It is clear that like E. thrax   , E. torus   feeds primarily on Musa   spp.

There are a few published records of palms as food plants for E. torus   . Robinson et al. (2001) list Caryota   and Roystonea regia   . In their treatment of pests of rattan palm in Peninsular Malaysia, Maziah et al. (1992) include E. torus   , although Steiner (2001) and Steiner & Aminuddin (2001) subsequently indicate that this record should be treated as E. acroleuca Wood-Mason   & de Nicéville (= hiraca Moore). There are internet records of E. torus   using Canna   sp(p). ( Cannaceae   ) as food plants, but these have not been traced to any formal publication, and may well be derived from records for E. thrax   , when the name E. torus   was misapplied to that species.

As documented below, the leaf shelters of E. torus   (and E. thrax   ) can only be built using a leaf with a large flat lamina, e.g. Musa   spp., Heliconia   spp., some Strelitziaceae   , Marantaceae   , Zingiberaceae   , etc. (all in the Zingiberales   ), and unlikely to be used on pinnate palms. Cock (2015) concluded that all food plant records of E. torus   from palms should be disregarded, and although the possibility of Zingiberales   other than Musa   spp. being used as food plants cannot be discounted, none should be considered confirmed at this time.

Life history. Reporting the establishment of E. torus   in Mauritius Monty (1970 as E. thrax   ) includes a summary of the life history. Hoffmann (1935) and Bascombe et al. (1999) describe and illustrate the early stages of from Hong-Kong / Canton, and Igarashi & Fukuda (2000) include the life history from Japan. We include documentation of the life history from Mauritius ( TCEC) and Peninsular Malaysia ( MJWC). The observations reported here do not differ substantially from those for other parts of the range of E. torus   or those of E. thrax (Cock 2015)   .

Ovum. We have not documented ova. In Hong Kong and Canton, ova are 1.8–2.2mm in diameter, domeshaped with 22–29 fine ribs stopping short of the micropyle; they are red, pink or variegated pink and yellowish white when laid, becoming paler as they develop; they are usually laid on the leaf underside, and may be laid singly, but more often in clusters of up to 30, rarely 50 ( Hoffmann 1935, Bascombe et al. 1999, Plate 103.1 – 2; Figure 3 View FIGURE 3 ). In Mauritius, TCEC noted that the female prefers to lay her ova on young banana plants. We assume that on hatching the young caterpillar eats the eggshell completely, as no hatched ova were found near them.

Leaf shelters. Caterpillars roll the leaf in a way not seen in any Afrotropical species. The young caterpillars make a cut from the leaf edge, slightly curved distally or more usually basally, and roll the resultant flap under at an angle to the leaf edge ( Figure 4 View FIGURE 4 ).

The older caterpillars make a similar curved cut in the leaf, starting distally and extending towards the midrib and leaf base, and roll the cut portion, extending the cut across the leaf over time. Normally the shelter is a leaf roll (Figure 5.1), but sometimes the shape is more conical (Figure 5.2); this seems to be individual variation. If it is sufficiently disturbed or meets the cut of another shelter, the caterpillar makes a new leaf roll. No evidence of eating can be seen outside the shelter, and when the tube is unrolled, the unrolled leaf does not refill the leaf space it originally occupied. The caterpillar feeds by eating the inner layers of the tube, thus avoiding the dangers inherent in emerging from its shelter. One effect of this is that the inside diameter of the tube becomes much greater than is usual in Hesperiinae   tube shelters. The bottom end of the shelter is loosely sealed with silk, often retaining the frass, thus hindering access by predators. TCEC observed in Mauritius that the top of the shelter is crudely closed with silk, but must be opened when the caterpillar extends the cut, and rolls more of the leaf; old strands of silk are cut and remain visible along the cut on the leaf section not incorporated into the shelter (Figure 5.2). This detail is at variance with the description and diagrams of Makibayashi (1981), and MJWC’s observations from western Malaysia that the silk strands used to form the shelter are attached to parts of the leaf that are subsequently incorporated into the shelter ( Figures 6–7 View FIGURE 6 View FIGURE 7 ). It is possible that this difference is associated with the conical (Figure 5.2) rather than tubular shape (Figure 5.1) of the leaf roll; the latter is normal, but the former occurs occasionally. Further observations are needed to clarify this.

For pupation, the caterpillar makes an inner, wax lined, sealed pocket within the leaf roll (partially apparent in Figure 12 View FIGURE 12 ), within which it pupates, head up, attached at the cremaster, but without a girdle.

Caterpillar. All instars are pale green with a dark or black head. Figures 8 View FIGURE 8 from Mauritius and 10 from Malaysia show a brown head, whereas Figure 9 View FIGURE 9 from Malaysia shows a head that is almost black; this seems to be individual variation. From an early age (Figure 4.2), the caterpillar is covered with an increasingly thick layer of white powder, so that the body appears white with erect pale setae partially covered with the powder ( Figures 8–9 View FIGURE 8 View FIGURE 9 ), and shortly before pupation, the uniformly dark head is partially obscured with the white powder ( Figure 10 View FIGURE 10 ). The caterpillar grows to 55mm in length ( Igarashi & Fukuda 2000) and is covered with white flocculence as it prepares for pupation.

Pupa. The pupa ( Figures 11–12 View FIGURE 11 View FIGURE 12 ) is up to 45mm long, pale brown with a variable and patchy covering of white powder. The proboscis extends beyond the cremaster. The pupa is attached at the cremaster, and unlike many Hesperiinae   does not construct a silk girdle. 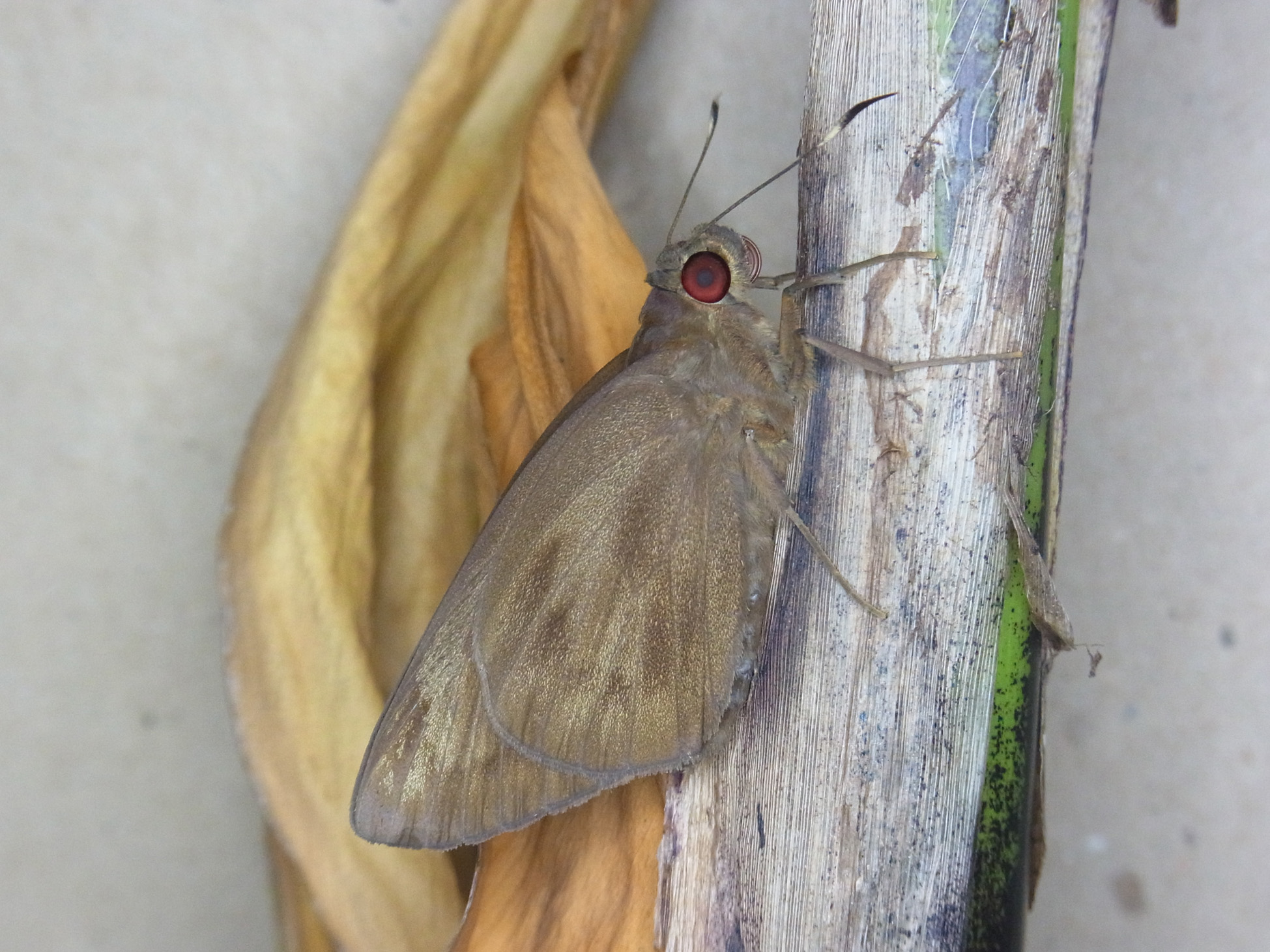 FIGURE 6. Erionota torus leaf shelters on plantation banana, Malaysia, Negeri Sembilan, 3.4 km East of Titi, 25. x. 2014, MJWC 14 / 1. 1, a typical final instar shelter; 2, three shelters (two abandoned) on one leaf; 3, a shelter from below with dangling leaf strip from centre of shelter. Note in 2 and 3 there is no trace of silk attachments on the leaf under surface adjacent to the cut (cf. Figure 5.2). FIGURE 7. Leaf shelter of mature caterpillar of Erionota torus on Musa sp., Malaysia, Seremban, Serdang, 6 Feb 1993, MJWC 93 / 106. 1, shelter in situ, seem from above; 2, detached shelter seen from below; 3, detail of the closed upper end; 4, the shelter unrolled (same orientation of bottom left leaf edge as 2), with mature caterpillar in centre of roll. 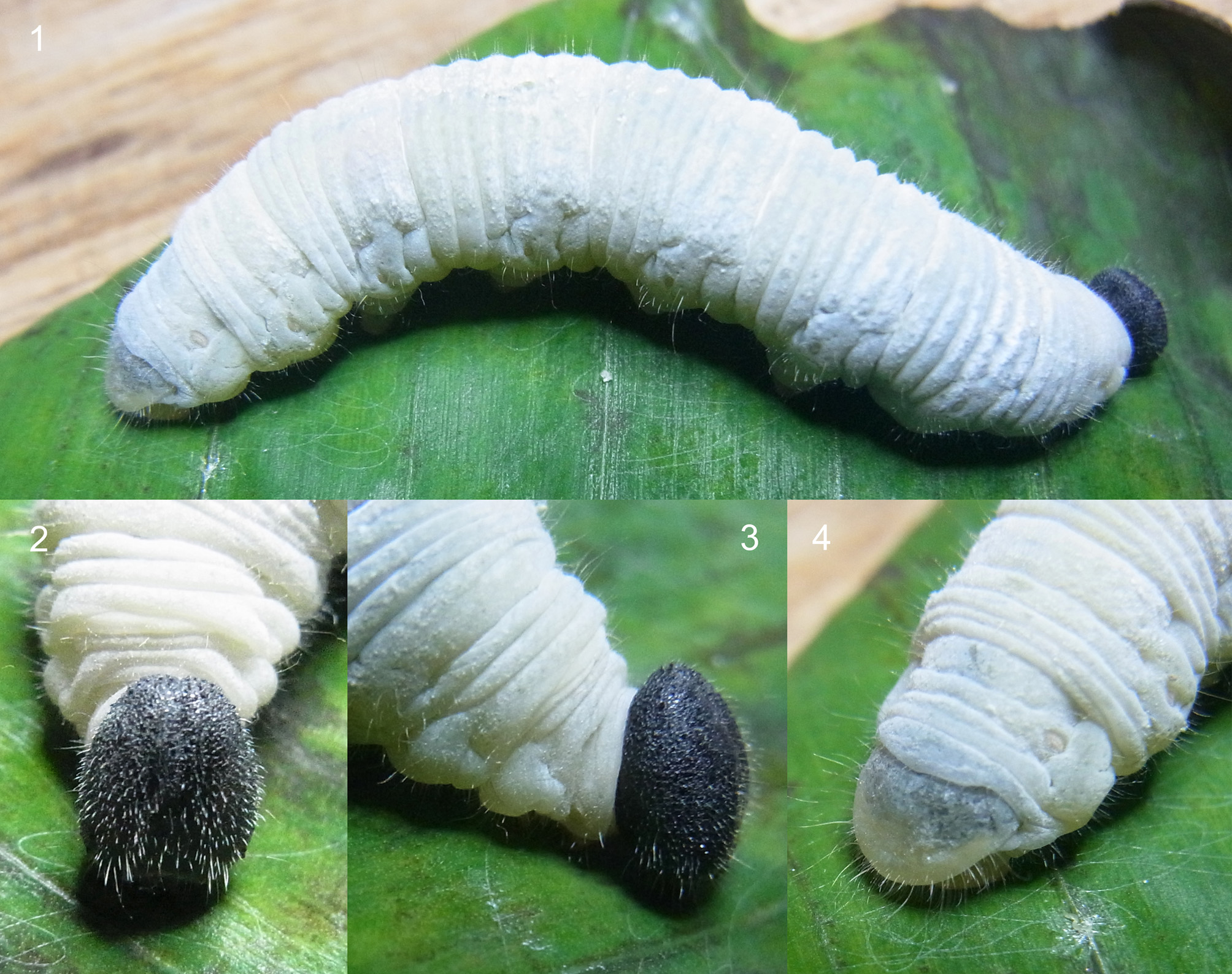 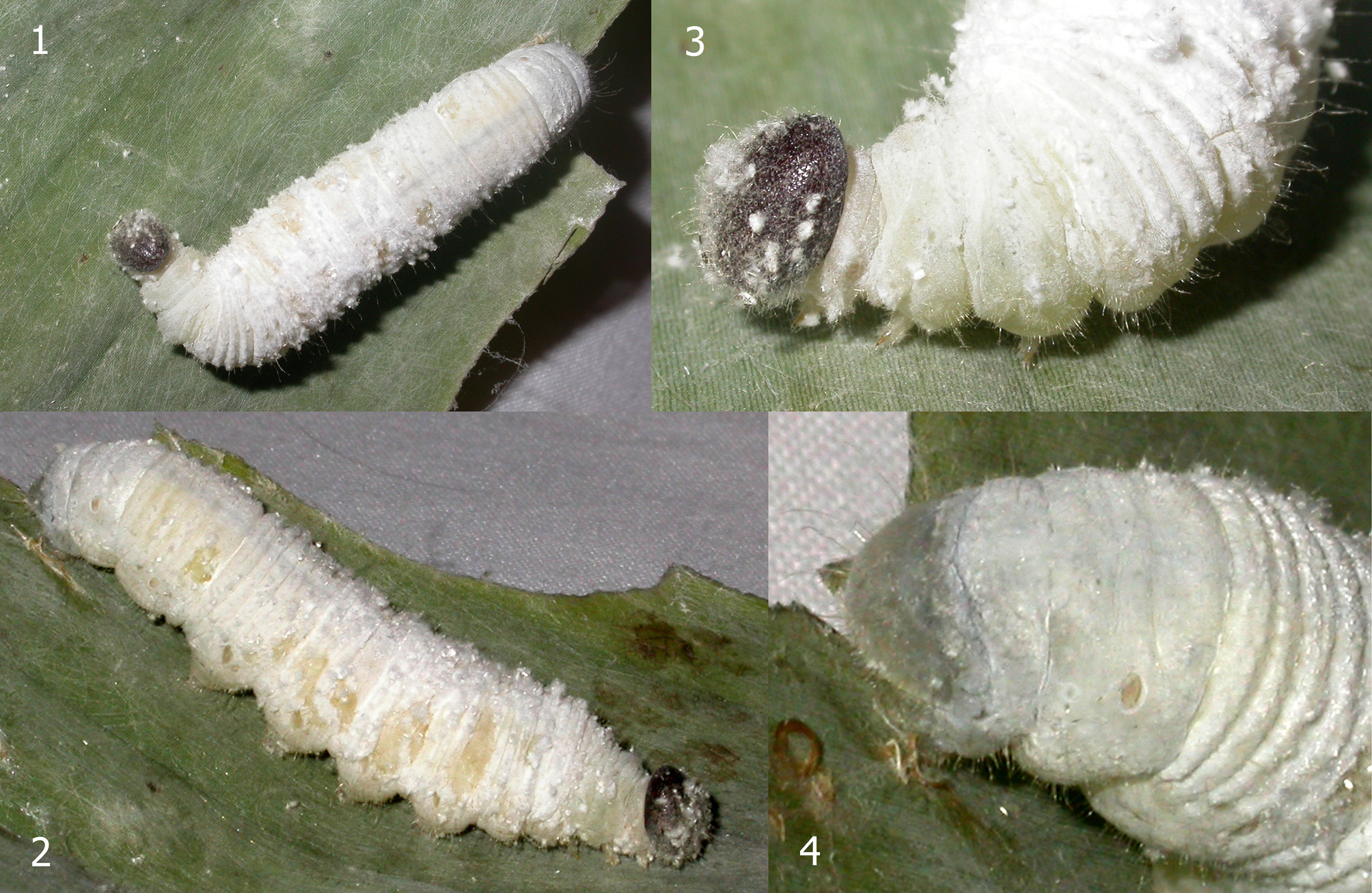