Diagnosis. Small to medium sized (length 6–12 mm), slender, elongate species, with strong metallic colouration and occiput with a prominent fringe of posteriorly directed hair-like setae. Similar to Ptecticus  , but distinguished by the: anterior ocellus farther from posterior ocelli than they are from each other, forming an elongated triangle; wings with vein R 2+3 arising distal to r-m; lower calypter with strap-like lobe present; and strong metallic colouration.

Remarks. With the transfer of C. gselli  from Sargus  to Cephalochrysa  , there are now three recognized species of Sargus  from Australia. According to White (1916), Sargus  was previously unrecorded from Australia at the time, with Sargus meridionalis White, 1916  being the first species recognized from the continent. This was reinforced by Hill (1919: 460) in his description of S. gselli  (= C. gselli  ), stating that Sargus  “has been known in Australia by only one described species, S. meridionalis White. There  are one or two additional species… from North Queensland (Kuranda)”. Hardy (1932) later described the second species in the genus from Australia, Sargus darius Hardy, 1932  , including a paratype from Kuranda, which is presumably the additional species referred to by Hill.

It is possible that species names applied to the Australian fauna are erroneous, such as Sargus mactans Walker, 1859  (originally described from Indonesia), which has been used for specimens from Queensland. In a review of the Oriental Stratiomyidae, Brunetti (1923: 157)  identified specimens of S. mactans  deposited in the BMNH from “North Queensland ”. This Australian record was adopted by some workers ( Hauser & Rozkošný, 1999: 13; Woodley, 2001: 226), however, S. mactans  was not acknowledged by Hardy (1932) and the name has not been applied to material deposited in most Australian collections. Moreover, it seems unlikely that the southeast Asian fauna have travelled east of the Wallace Line. The identify of S. mactans  from Australia has been made further complicated by the damaged type specimen from the BMNH (head and left with missing; Fig. 11View Figure 11), in addition to the lack of available key to species and authoritatively identified collection specimens. Therefore, we tentatively retain S. mactans  as part of the Australian fauna until a much needed species-level revision can be completed for Sargus  from the Oriental and Australian regions.

Biology. According to James (1960), adults from the Nearctic are commonly found flying near or resting on leaves in sunlight, and visiting flowers such as Sedum  (stonecrop, Crassulaceae  ), Isocoma vernonoides  (goldenbush, Asteraceae  ), and Sambucus coetulea  (elderberry, Adoxaceae  ), whereas the larvae breed in decaying vegetation, including leaves, turnip roots, and/or mammal excrement. Regarding the Australian species, S. meridionalis  seems to decompose organic waste since it has been bred from human faeces [ANIC 29-037454, 29-037455].

[BMNH; damaged, head and left with 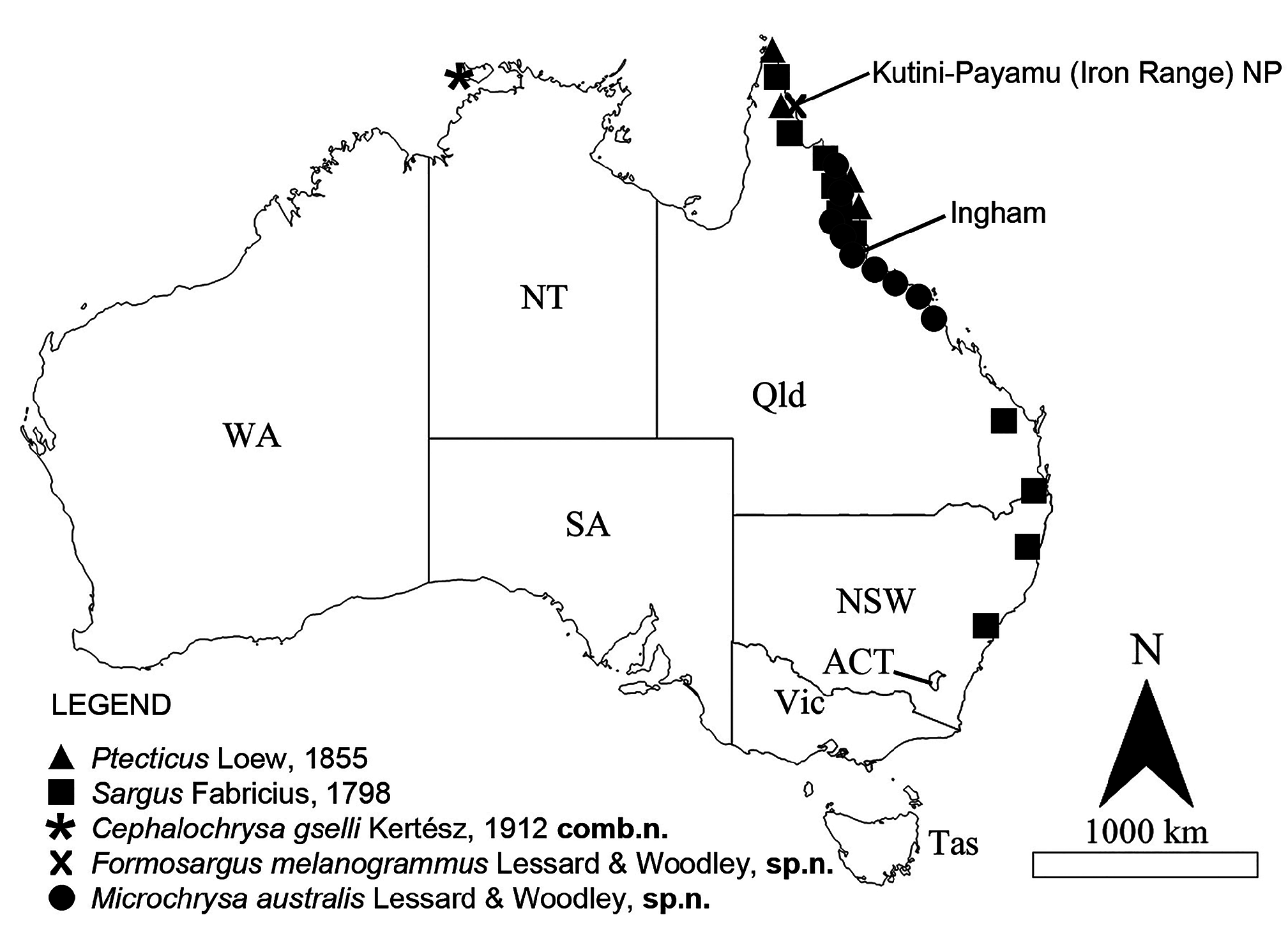 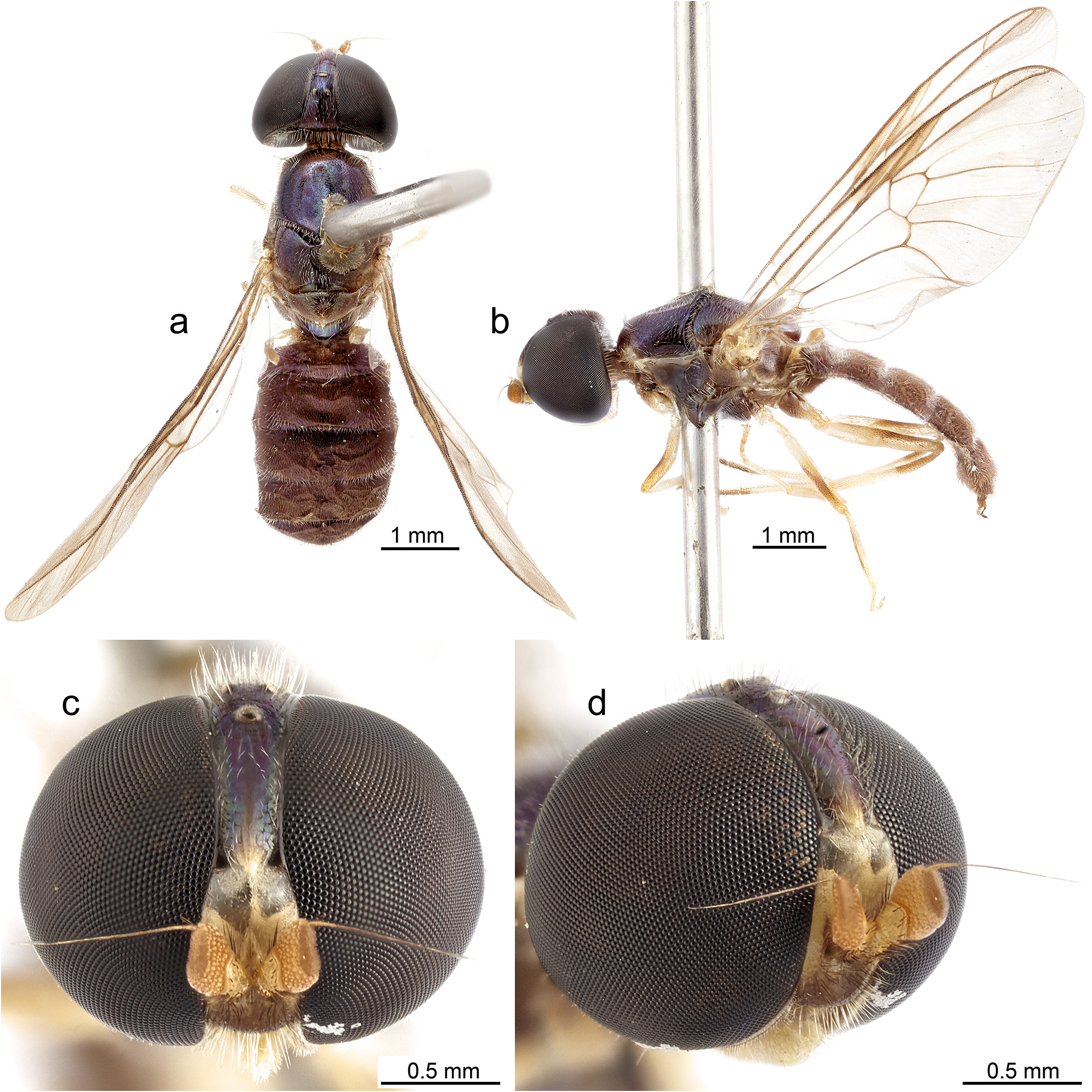