Diagnosis. A small yellowish brown species with short frons, the undusted frontal triangle almost equilateral, brownish, with a band of yellow encircling the black ocellar prominence; the occiput bearing a dusted lyre-shaped dark marking extending on either side from neck to inner vertical seta, the haltere completely yellow; the pleura

predominantly shining and the anepisternum having on its upper margin a distinct concavity bearing 4–5 vertical lines of compact black setulae (Figs 12, 13).

Description. Male. Head: deeper than long; frontal triangle with base slightly longer than sides, reaching four fifths of the way to anterior margin of frons, which bears a line of silvery dust along eye margin and scarcely projects beyond the eyes; face, parafacial and gena silvery grey dusted, the latter without any shiny area and in depth equal to one third of the width of the face; inner vertical seta much stronger and one and a half times as long as the outer; apex of pedicel and dorsum of postpedicel infuscate, postpedicel short, rounded, its dorsoapical angle a right angle. Thorax short with scutum convex, the scutellum apically rounded with its dorsal surface flat and slightly rugose; scutum and scutellum subshining through weak grey dust, the dorsocentral lines and a broad band extending across lower notopleuron to wing base more heavily silvery grey dusted; postpronotal lobe shining on all but its upper margin; notopleural seta long and strong, almost as long as the pair of widely-separated, cruciate scutellar marginals, the postalar somewhat shorter and the prescutellar dorsocentral very short and weak; pleura shining from anterior margin to the posterior one third of anepimeron, apart from some fine dusting amid the long pale hairs on ventral surface of katepisternum. Legs faintly grey dusted with hind tibial organ distinct, occupying almost two fifths of its length and with the compact pilosity it bears blackish grey. Wing brownish hyaline with veins brown, but costa yellowish from base to humeral crossvein. Abdomen with tergites yellowish brown and subshining through brown dust.

Female resembling male in all characters but those of the postabdomen.

A dissected female from Morogoro was found to contain a single larva which is as long as its abdomen.

Note: The peculiar group of hair ridges situated in a depression on the upper hind corner of the anepisternum has no parallel development known to me. Although equally developed in both sexes, it is suspected by Dr. Ismay to be of stridulatory function. It would appear significant that coupled to this character is a peculiarity in the lie of the close-set microchaetae clothing the notopleuron and lateral scutal declivity from the wing base forwards, these considerably longer than those on the disc of the scutum and radiating out from the hind corner of the anepisternum (Fig. 14). 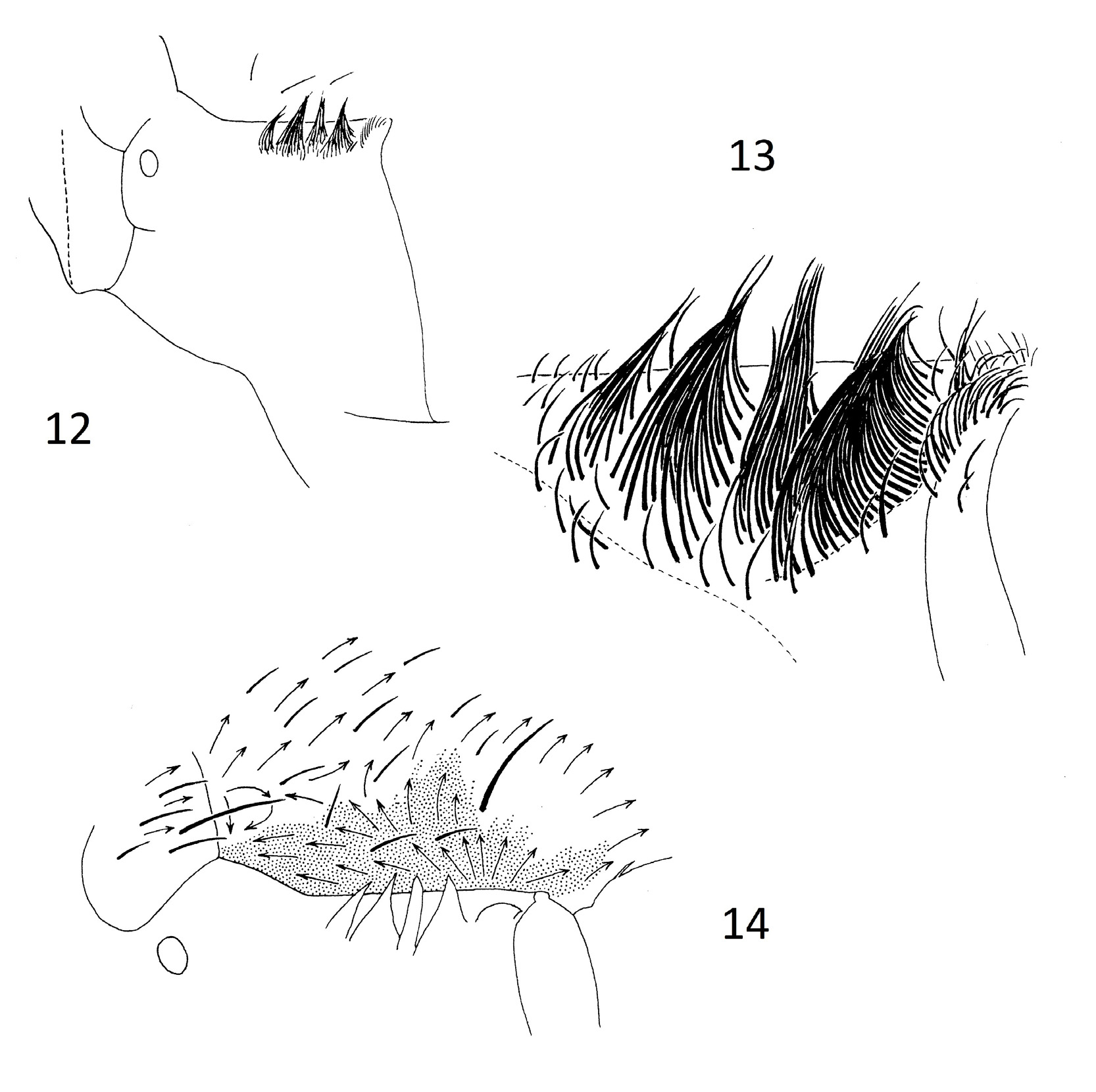