Suarez-Morales, Eduardo, 2010, On the taxonomic status of Monstrilla leucopis Sars (Crustacea: Copepoda: Monstrilloida) from Norway, with comments on the male of M. longiremis Giesbrecht, Zootaxa 2510, pp. 55-67 : 56-62

In the description of M. elongata from the western Caribbean, Suárez-Morales (1994) recognized a close resemblance between this species and M. leucopis . Based on the general resemblance between M. conjunctiva and M. leucopis , several authors ( Sewell 1949; Isaac 1974, 1975; Razouls et al. 2009) considered the latter as at least a possible junior synonym of the former. Monstrilla conjunctiva was originally known only from the male, a specimen from deep Antarctic waters ( Giesbrecht 1902). A male and female recorded from tropical Indian Ocean surface waters in the Nicobar Islands were questionably assigned to this species ( Sewell 1949), and the general resemblance of the female to Sars’s (1921) M. leucopis probably motivated the decision to propose this synonymy. However, because of obvious biogeographic considerations and the fact that cooccurrence of two monstrilloid specimens of two genders in a sample is no indicator of conspecificity ( Suárez-Morales 2001), it is clear that the Nicobar females reported by Sewell (1949) are not conspecific with M. conjunctiva from the Antarctic area. In fact, Sewell (1949) doubted his designation of these females as M. conjunctiva as it was called “unknown” in the text and written as “ M. (?) conjunctiva only in the figure caption. Hence, a morphological comparison between these females is not necessary since the Nicobar females most probably represent an undescribed species. During this study, unique characters were revealed that distinguish M. leucopis from all other known species of Monstrilla . These include the presence of modified setae on the endopods of legs 2–4. These stout, thick-walled setal elements clearly differ from the usual setae and are easily detectable. This kind of modification has not been described previously among the Monstrilloida . Another interesting character is the reduction of the number of elements (to four) on the third endopodal segment of leg 1, the usual pattern including five setae. This reduction was observed in at least two of the five specimens examined.

Based on all the evidence recounted above, it is suggested that M. leucopis is a valid species with unique characters; it is known only from Norway but there are some other regional records that could be assignable to this species. In his works on the Scottish copepods, T. Scott (1900, 1904) reported (as Monstrilla (?) danae and M. anglica , respectively) specimens that resemble M. leucopis . These were noted by Sars (1921) and later on by Sewell (1949), who also stated that Scott’s (1904) figures were different from those published in 1900 and that only the latter illustrations represented a specimen barely distinguishable from M. leucopis . I agree with Sewell’s (1949) comment about the conspecificity of Scott’s (1900) female M. anglica and M. leucopis .

The male of M. leucopis was described by Sars (1921) from the same locality in Norway (Kvalø). Unfortunately, the sample labeled as the male of M. leucopis in the Sars Collection contained a male specimen of M. longiremis . There are no other specimens in the Sars Collection labeled as M. leucopis (Å. Wilhelmsen, in litt.); hence, the single male specimen of this species mentioned and depicted by Sars (1921) is considered lost. Considering Sars’s (1921) figures of the male M. leucopis , it is clear that it has a strong resemblance to the male of M. conjunctiva described by Giesbrecht (1902) from the Antarctic Ocean and the one from the Indian Ocean assigned to this species by Sewell (1949). Clearly, these two males ( Nicobar and Norway) are likely to represent distinct species because it is biogeographically inconceivable that they are conspecific with the Antarctic M. conjunctiva . In the light of the morphological evidence supporting the validity of M. leucopis , a comparison is made between the Nicobar and the Antarctic males. In the holotype male of M. conjunctiva ( Giesbrecht 1902) , the cephalothorax is relatively shorter (53 % of total body length) than in the Nicobar male (61 %). The genital somite of the holotype appears to be relatively smaller than that of the male from Nicobar as depicted by Sewell (1949); in the former, this somite represents 33 % of the urosome, vs. 50 % in the Nicobar male. The distal elements 1 and 2 of the fifth antennular segment (sensu Huys et al. 2007) appear to be subequal in the Nicobar male whereas element 2 is distinctly longer in M. conjunctiva (cf. Giesbrecht 1902: figs. 1, 2). The terminal seta of the single fifth leg lobe is clearly longer in the Nicobar male, it reaches well beyond the distal margin of the caudal rami, whereas it does not reach this margin in M. conjunctiva (cf. Giesbrecht 1902: fig. 3). In lateral view, the accessory subterminal spiniform element of the genital complex is inserted more anteriorly than in the Nicobar male (cf. Sewell 1949). 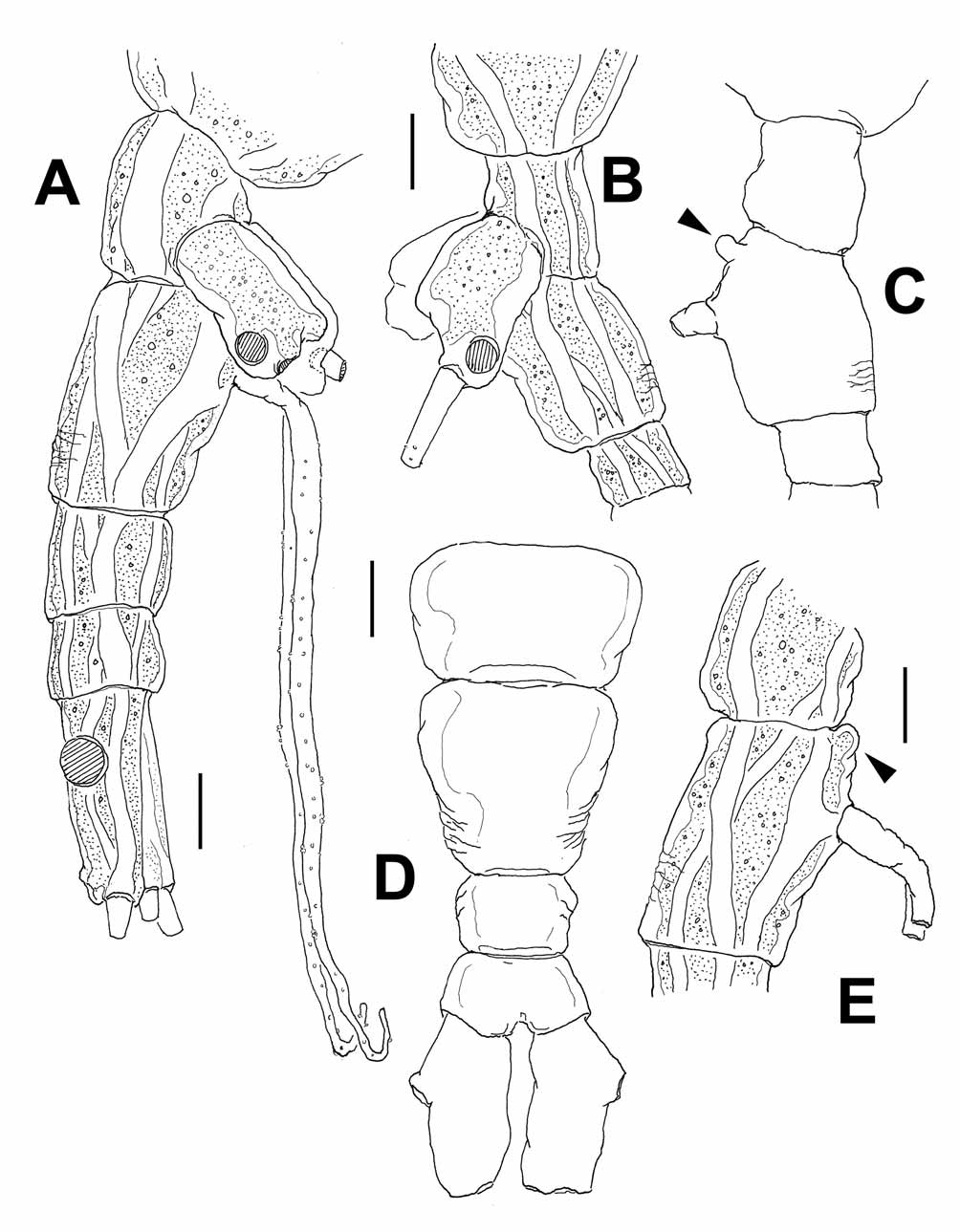