The genus Priesneria   currently includes five species, of which three (including the type species, P. kellyana Bagnall   ) are from Australia, with one from Hawaii and the other from India. All of these species have the third antennal segment with a remarkable, sub-basal, shelf-like ridge ( Mound & Minaei 2007). Four of the five species have only two sense cones on the fourth antennal segment, whereas longistylosa Pitkin from Australia shares with the new species described here the condition of four sense cones on this segment. Similarly, four of the five species have the major setae on the head and pronotum with capitate apices, and only peronis Mound & Minaei has these setae pointed and rather short. The new species shares with longistylosus the character states of the antennal sense cones and also the slender form of antennal segment VIII, but it is unique in the genus in having the setae on the head and pronotum ( Figs 22, 25 View FIGURES 22 – 26 ) exceptionally long and finely pointed. The biology is unknown, but like other members of the genus this species is probably predatory on other small arthropods.

Psalidothrips taylori Mound & Walker   ( Fig. 29 View FIGURES 27 – 32 ): Described from Australia, where it is now known to be widespread, this species is also recorded widely from the North and South Islands of New Zealand. Adults are usually wingless, and the species is a fungus-feeder living at the base of grasses and in leaf-litter. Wingless specimens of both sexes, also fully winged females, were extracted from leaf litter under Olive trees at the edge of forest near Captain Cook Point in March 2014. One macropterous female of an undescribed species of Psalidothrips   was taken from leaf-litter under Araucaria   and Toona   trees at Prince Philip Drive.

Sophiothrips martinae Mound & Tree   ( Fig. 30 View FIGURES 27 – 32 ): Wingless individuals of both sexes of this small, fungus-feeding thrips have been found on dead branches along the following tracks in the Norfolk Island National Park: Bird Rock, Bridle, and Palm Grove, also at Highland Lodge, 100 Acre Reserve, and on Mt Pitt. As with other members of this genus, there is considerable variation in body size, and the largest males have a small horn ventrally on the head between the bases of the antennae. It is a distinctively bicoloured species, largely yellow with brown spots on the head, pronotum and legs. In structure it is particularly similar to Sophiothrips aleurodisci   , a dark brown species known only from New Zealand, but martinae   is probably a Norfolk Island endemic.

Stephanothrips occidentalis Hood & Williams   ( Fig. 32 View FIGURES 27 – 32 ): Described from the Caribbean island of St Croix, this is the most common species in this genus. It is widespread around the tropics, including Queensland in Australia, living in leaf-litter and on dead branches ( Mound 1972). On Norfolk Island, females have been collected from dead leaves and dead branches at various sites across the island.

Strepterothrips   species: Populations of an apparently undescribed species of this genus were found widely across the island, but particularly in the National Park at Red Road and on Bird Rock Track. It is a fungus-feeding species, and shares many character states with S. tuberculatus   , a species that is common on dead branches across Australia and also occurs in New Zealand ( Mound & Ward 1971). More detailed studies on the various species of this genus in Australia are needed before the Norfolk Island populations can be described as a new species.

Yarnkothrips kolourus Mound & Walker   : Described from New Zealand, this species has subsequently been found in Australia from Tasmania, south-eastern New South Wales, the Australian Capital Territory, and south of Darwin at Litchfield National Park in the Northern Territory. This species, the only named member of the genus, is unusual in its structure. The pronotum has incomplete notopleural sutures, the posteroangular setae are close to the epimeral setae, and the mesopresternum is largely fused to the mesoeusternum. Y. kolourus   lives on dead branches, but as no more than one specimen has ever been taken at any one site it is probably a predator on other small arthropods. At least ten specimens were taken individually on Norfolk Island at various sites, including Captain Cook Point, Mt Pitt, Highland Lodge, Prince Philip Drive, and Bird Rock Track. 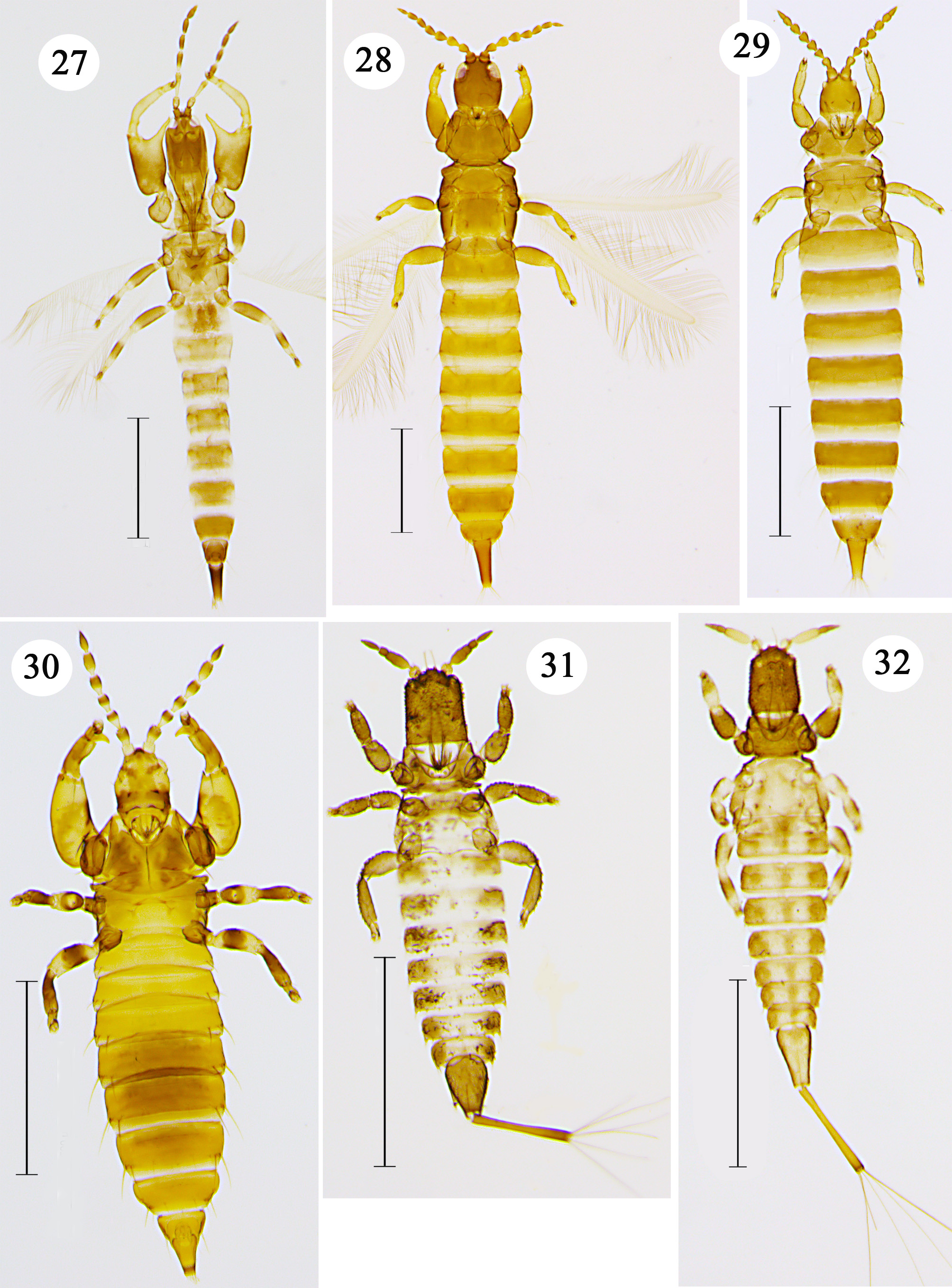