This species ( Figs 49 – 55 View FIGURES 49 – 55 ) is a member of a species-group within Thrips genus that is otherwise known only from New Zealand ( Mound & Masumoto 2005). Members of this species-group have three pairs of posteromarginal setae on the second abdominal sternite, whereas species of this genus from the rest of the world have only two pairs. This new species is closely similar to Thrips obscuratus   , the New Zealand flower thrips that is abundant throughout that country, and is similarly variable in size and colour. However, T. merae   differs particularly in having the metanotum much less closely striate. Moreover, even when compared with specimens of obscuratus   of equal wing length, merae   females have a shorter third antennal segment, fewer pronotal discal setae, and shorter microtrichia medially to the comb on tergite VIII. The males have sternal pore plates that are never more than four times as wide as long, and all available specimens have only seven antennal segments. In contrast, males of obscuratus   have pore plates that are six or more times as wide as long, and both sexes commonly have eight antennal segments. Populations of this new species have been found only in association with the Norfolk Island critically endangered endemic plant, Myoporum obscurum   , of which there are small numbers growing in the National Park as well as a few cultivated specimens in other parts of the island. In New Zealand, T. obscuratus   is highly polyphagous, and breeds in the flowers of a very wide range of native and introduced plants.

Thrips nigropilosus Uzel: This species is found worldwide in temperate areas, breeding on many different plant species, particularly lettuce and pyrethrum. In December 2012, the lower leaves of a crop of young Cos lettuce plants on Bullocks Hut Road were found to have considerable damage in association with large numbers of this thrips. The only other specimens of nigropilosus found were also on a lettuce crop, in February 2014.

Thrips novocaledonensis   Bianchi ( Fig. 39 View FIGURES 33 – 42 ): This species occurs in abundance everywhere on Norfolk Island. It appears to breed only in flowers, and was found in virtually every type of flower on the island that was examinedin gardens, vegetable areas, and forests. The original specimens studied by Palmer (1992) that provided the basis for the record of Thrips hawaiiensis from Norfolk Island ( Smithers 1998) have been re-examined and correctly identified as T. novocaledonensis   . This species is not known from the Australian mainland, but was described from New Caledonia and is recorded from Vanuatu. Frequently males were observed on Norfolk Island forming aggregations, sometimes on individual flowers, but sometimes on the leaves of plants that did not bear any flowers. The significance of these aggregations to breeding behaviour remains unknown.

Thrips simplex (Morison): The gladiolus   thrips is found worldwide, wherever Gladiolus   is cultivated, although it presumably originated in South Africa. Feeding damage usually takes the form of streaking on the flowers. One population was found on Norfolk Island, on some flowering Gladiolus   plants growing as weeds on open land near the start of Palm Grove Track.

Thrips tabaci Lindemann: The onion thrips is found throughout the world, except in the wet tropics. It is highly polyphagous, and large numbers of females were found on Norfolk Island on leeks and shallots, as well as carrots, young cabbages, and young bean plants, often in association with considerable leaf damage. It was particularly abundant in November 2014 after several months during which little rain had fallen. 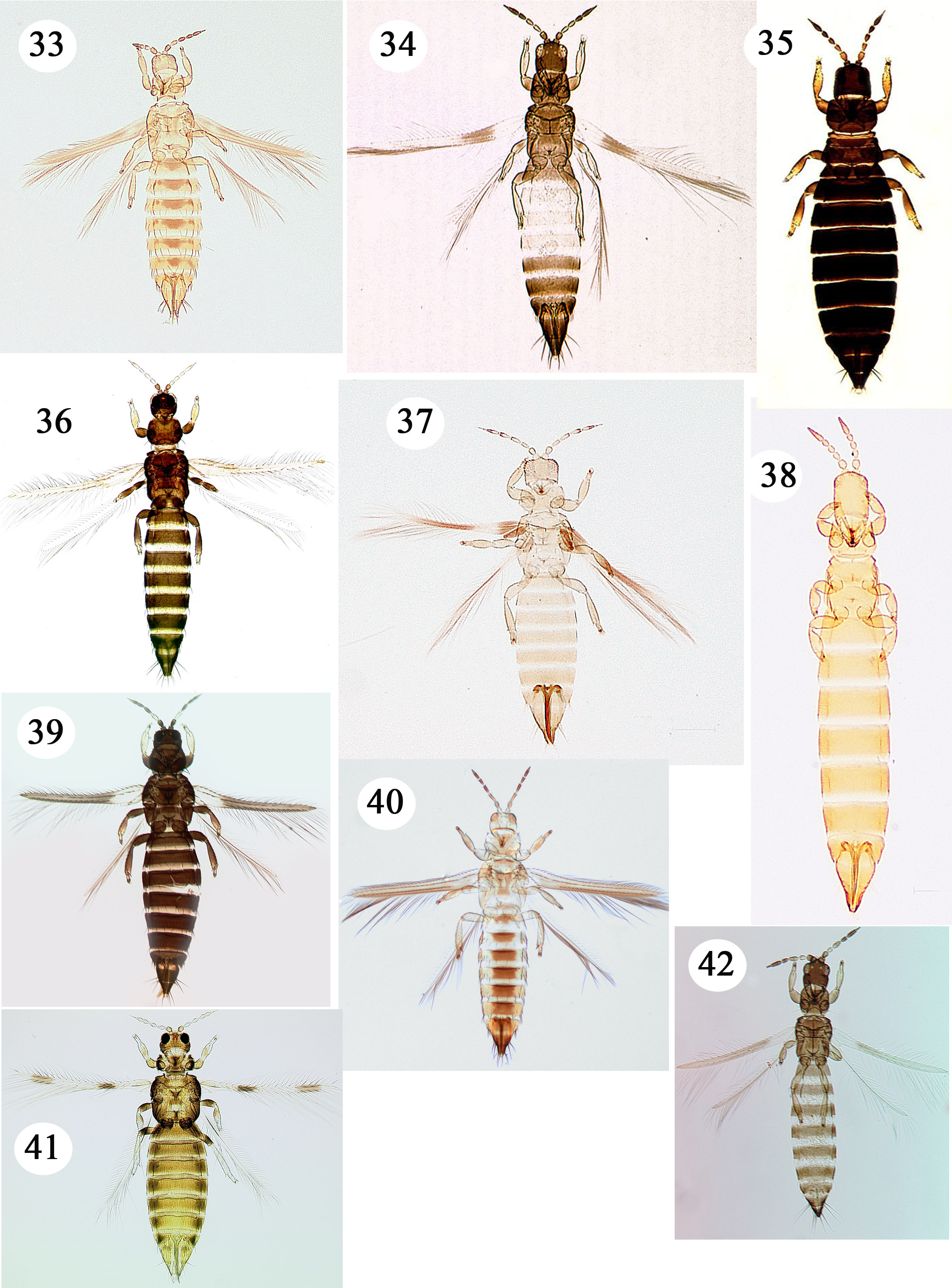