Diagnosis. Laemolyta   is distinguished from all other genera of the Anostomidae   in having the symphyseal tooth of the dentary approximately equal in size to the second tooth with both teeth spatulated, very compressed, and with the upper edge straight (vs. symphyseal tooth sometimes much larger than the second tooth or slightly larger than the second tooth and sometimes cusped as the remaining dentary teeth, thick or recurved) ( Fig. 1 View Fig ). Adult specimens have a supra-terminal mouth, a condition that is shared only with Anostomoides   among anostomids. In spite of Winterbottom’s interpretation of a supraterminal mouth in the Anostominae   , in our interpretation all members of this subfamily have a superior mouth. Species of Anostomoides   , however, have the symphyseal tooth longer than the second tooth on the dentary. Laemolyta   further differs from all other examined genera of the Anostomidae   in possessing a protuberance on the anteroventral region of the ectopterygoid ( Fig. 2 View Fig ), in the elongated mesopterygoid ( Fig. 2 View Fig ) with a small ventrally-directed process on its lateral surface and its ventral margin poorly developed, and in the relatively wide premaxilla with a fold on its median ventral margin that is prolonged as a rounded process medially, the upper premaxillary margin slightly recurved ( Fig. 3 View Fig ).

upper edge entire and premaxillary teeth crenate. The typespecies of the genus, Laemolyta taeniata   , had been first described in Schizodon   by Kner (1859) but was later included in Anostomus   by Günther (1864).

Eigenmann & Eigenmann (1891) listed in Laemolyta   the species that Garman (1890) considered to belong in the subgenus Schizodontopsis   and others including L. taeniata   , L. proximus   , L. varius   , L. varius nitens   , and L. orinocensis   . Subsequently, however, Eigenmann (1910) included only the typespecies of the genus Schizodon taeniatus Kner, 1859   in Laemolyta   ; and allocated the other species previously included in this genus to Anostomus   . In the same paper Eigenmann considered the sub-genus Schizodontopsis Garman, 1890   to be synonymous with Laemolyta   .

Laemolyta fasciata   was described by Pearson (1924) based on two immature specimens (20 mm SL) from Bolivia with the taxonomic position of the species becoming very confused when Ahl (1937) shifted the species to Anostomus   . Ahl reported that Laemolyta fasciata   possessed the characteristics of Anostomus (Schizodontopsis) Garman, 1890   as a con- sequence of the fact that he did not recognize Garman’s subgenera. Since Anostomus fasciatus   was already preoccupied in Anostomus (Spix & Agassiz, 1829)   , Ahl renamed the species described by Pearson as Anostomus pearsoni   . Myers (1950) did not recognize Ahl’s combination as valid, because according that author the name fasciatus   was not occupied in Laemolyta   .

The type material of Laemolyta fasciata   was not examined during this study but all measurements and counts on that specimen were taken by Anostomoides Mônica   Toledo- Piza (DZ-IBUSP) and the digitalized picture and radiograph of the specimen were provided by David Catania (CAS). This information was insufficient to permit a definitive identification because the specimen is a juvenile (15.7 mm SL) in very poor condition. According to H. A. Britski (MZUSP) (pers. commun.) the general characteristics of the specimen, in particular its color pattern suggest that this specimen might belong to a species of Leporinus   . Böhlke (1958) discussed this question and if this is true, the valid combination would become Leporinus pearsoni ( Ahl, 1937)   , which would be a homonym of Leporinus pearsoni Fowler, 1940   . The problem about the correct name for the species in question can only be resolved after a more detailed study.

Laemolyta borellii (Boulenger, 1900)   included by Fowler (1950) in that genus, has teeth with five or six cusps of about the same size on both jaws, a characteristic of the genus Schizodon   according to Garavello & Britski (1990) and Garavello (1994).

Laemolyta laticeps   cited by Borodin (1931) and Myers (1950) belongs to Anostomoides Pellegrin, 1908   , as suggested by Géry (1974: 149, in footnote). Géry examined the type and mentioned that it was very similar to Anostomoides atrianalis   . One of us (KCM) examined the holotype of Schizodontopsis laticeps Eigenmann, 1912   and confirmed that it is not a species of Laemolyta   . The lower jaw teeth of the specimen have rounded upper margins and the symphyseal tooth is considerably more developed than the second tooth, both of which are characteristic of Anostomoides   .

According to Géry (1977) the genus Anostomus   is composed of two groups that could be considered distinct genera or subgenera: Anostomus (Laemolyta)   and Anostomus (Anostomus)   . The Laemolyta   group is distinct in having the mouth opening slightly less upturned (not quite aligned with the dorsal surface of the snout), and in having multicuspidate teeth on the premaxilla and truncate teeth on the dentary. Géry also emphasized the great similarity between the dentition of young specimens of Laemolyta   and Anostomus   and the manner in which they orient in the water column with the head downturned.

Specimens over 40 mm SL can be identified as members of Laemolyta   by the presence of crenate teeth on the upper jaw and the possession of compressed teeth with a straight apical margin. In specimens smaller than 40 mm SL the teeth both on the upper and lower jaws are cuspidate which makes identification to the generic level based on dentition very difficult.

Key to the species of Laemolyta 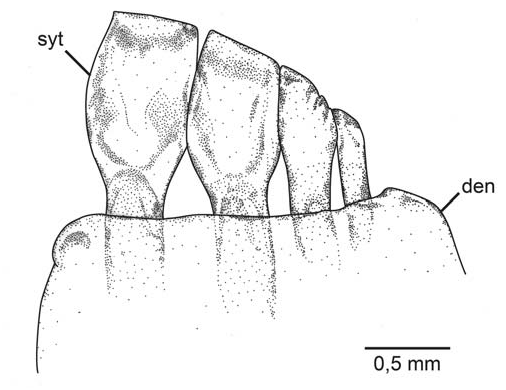 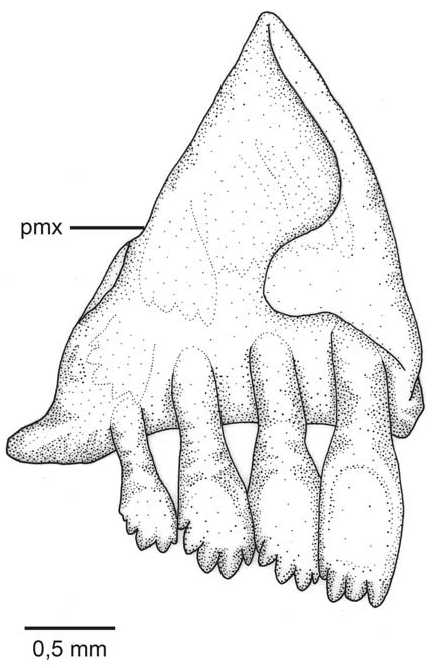