Lectotype abdomen incomplete posteriorly with only 5 to 6 segments; thorax 2.2 (E, 3.5, MAT­H, 1.5 to 2) mm wide, with a tear on left side, abdomen (E, 16, MAT­H, 8 to 22) mm long. Body with small irregularly distributed dark spots on a paler surface and with dark interramal spots on thoracic segments ( Fig. 4C View FIGURE 4 ), those of abdomen apparently sloughed off. Radiolar crown 11 mm (E, 10; MAT­H 7 to 14) mm long ( Fig. 4D View FIGURE 4 ), with about 20 ( MAT­H, 11 to 22) radioles united with short basal web. Basal stylode unpaired, small, sub­digitiform, width half of that of rachis. Stylodes: 18 ( MAT­H 9 to 14) pairs [s, s, s, s, L, m, m, m, m, XL, m, m, m, XL, m, m, XL, m, m], with small ones sub­digitiform, large ones and extra large macrostylodes tongue­like, length of latter two or three times length of large ones and width twice as wide as width of rachis (L: B ratio 3: 1 & 5: 1). More distal macrostylodes with uneven distal borders. All stylodes with brown pigmentation distally ( Figs 4H, J View FIGURE 4 ), together appearing as brown bands around crown. Radioles with paired compound eyes, one each side of rachis, halfway between sites of each pair of stylodes, but not between more distal pairs. Dorsal lips long (about a half length of crown), tapered and with longitudinal midrib. Collar with dorsal margins widely separate ( Fig. 4A View FIGURE 4 ), with lateral margins extending above junction between crown and thorax, and with sub­circular ventral lappets, slightly overlapping medially in the forward position and separated basally by a distinct gap ( Fig. 4B View FIGURE 4 ). Thorax with 7 or 8 segments, each torus long and extending to oblique lateral borders of adjacent shield ( Fig. 4B View FIGURE 4 ). Anterior border of first thoracic shield straight or slightly indented. Fascicle chaetae slightly geniculate or narrow at the knee as in B. nigromaculatum (cf. Figs 4E–F View FIGURE 4 , 10E View FIGURE 10 and Figs 2E–H View FIGURE 2 ), but thoracic uncini differ in that the crest teeth are arranged in two or three rows (several teeth per row in side view), occupying half of the main fang (cf. Fig. 4G View FIGURE 4 , and Fig. 2D View FIGURE 2 ).

Ehler’s (1887) syntypes of Dasychone conspersa were deposited in the Museum of Comparative Zoology and the Zoological Museum of the Humboldt University Berlin. The single specimen in MCZ, which had been subsequently wrongly labelled as a holotype, had dried out by 1937 (Ardis Johnston pers. com), and is now missing ( MAT­H). A lectotype has now been selected from Ehlers’s other syntypes, ZMHUB 6791 ( PK­J). There were 5 units in the vial, two of these (one with crown attached to body and one crown without body) agree with Ehler’s description in having stylodes as wide as or wider than the rachis. The more complete specimen was therefore chosen as lectotype ( PK­J). Unfortunately, Ehlers’s figure (pl. 54, fig. 3) of a radiole with stylodes is in side view, and the width of the macrostylodes does not show. That figure of the radiole may have misled subsequent sabellid workers to synonymise B. conspersum with B. bairdi . One of the syntypes was indeed Branchiomma bairdi (now ZMHUB 11064) but the proportions of Ehlers’ figured thorax and collar, agree best with the lectotype. Two other syntypes were yet other species, Branchiomma nigromaculatum and Bispira melanostigma (now ZMHUB 11063 and 11062 respectively).

Gravier (1908) recorded B. conspersum (as D. conspersa ) from Djibouti, Red Sea, but his material ( MNHN A257, PK­J) is B. boholense ( Grube, 1878) a species in which thorax and stylode proportions resemble B. bairdi rather than B. conspersum . The ‘holotype’ vial labelled Dasychonopsis arenosa Treadwell , contains two specimens. That with an attached crown is partially histolysised distally, but the crown without a body shows wide macrostylodes occurring intermittently on the distal half of the radioles. The more complete specimen has subcircular ventral collar lappets with a small, and a distinct triangular gap between their bases like the lectotype of B. conspersum (Treadwell’s figure is somewhat inaccurate in this respect).

As Gravier’s (1908) Red Sea record is another species of Branchiomma , B. conspersum has not been found outside the Caribbean Sea. 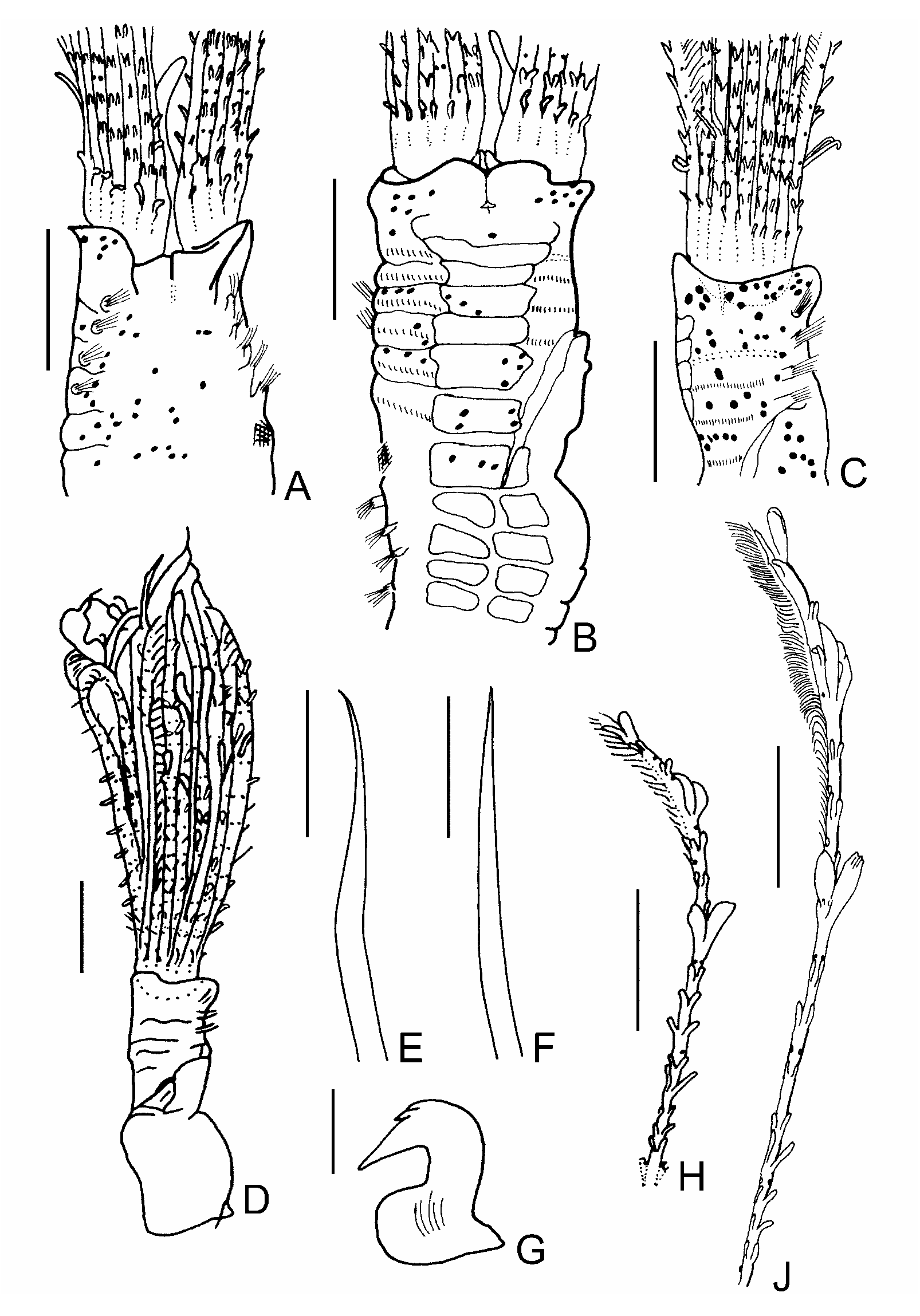