Adults: The I. zionensis   emergence was well synchronized, occurring over a 20 day period, from late June to early July, 1999, ( Fig. 4 View Fig ). The two vertical bridge abutments near Placerville were primary transformation sites for the river population during spring flows, and the periodic field exuviae collections gave a precise time-line for emergence of the local population. Exuviae were first observed and collected on June 20, 1999, when river temperature was 12°C at noon and 15°C at 16:00 ( Fig. 4 View Fig ). The actual sex ratio (male:female) for 1999 adults was 1.85:1 (N=1331). Total exuviae sex ratios, collected on 11 June, 1999, for the estimated 1998 adults was 1.21:1 (N=736), and July, 8, 1999 collection for the estimated year-2000 adults 0.71:1 (N=246). Emergence in 1999 was not protrandrous with both sexes of adults and exuviae simultaneously observed at the beginning. Maximum numbers of exuviae were observed four days apart, with males first on June 27, followed by females on July 1, 1999. The peak numbers of female exuviae and adult presence coincide with oviposition flights observed two and four days later. Adult presence was estimated using counts of live adults found on the Placerville bridge abutments at the same time that exuviae counts were made ( Fig. 4 View Fig ).

Emergence was largely over and nymphs gone on July 15 th, 1999, when average stream temperature reached 11.5°C. On July 1, 1999, nymphs began to exit the river at the Specie Creek study area at 21:30, one-half hour after a large, hovering, cloud-like hydro-psychid hatch had occurred. The transformation process for one female lasted 21 minutes; after final exit from the exuvium she rested approximately 40 minutes with wings hanging downwards, while her body hardened. Nymphs continued to leave the river until approximately 00:30. DeWalt and Stewart (1995) observed a similar time for transformation from 20:30 to about 22:00. Teneral adult males were mobile and bright yellow with smoky-gray wings held perpendicularly erect over the body still wrinkled and wet. The majority of observed teneral adults carried minute, orange mites (Hydrachnida) around the wing bases. Most adults, after hardening, moved over rocks and boulders to reach woody vegetation where they crawled upwards.

On July 2 nd, 1999, from 09:00 to 12:00 a search of streamside vegetation consisting mostly of young willows and alder was conducted to find the resting habitats of adults that emerged the previous evening. At the emergence site, near the mouth of Specie Creek, many fresh exuviae were still attached to rocks, boulders and only a few young saplings, and a beating sheet was used in an attempt to collect adults from the nearby streamside vegetation. Since none were found, adult searching was moved inland, away from the river. From 12:00 until 14:00, when ambient temperature climbed from 24–29°C, numerous adult males and females were observed from 10–50 m inland, at heights of 1–2 m, under loose bark of mostly alder and cottonwood trees. DeWalt and Stewart (1995) observed emergence occurring <1 m from the ground and found adults in willows either at the bases in the morning or near the tops as the sun rose. Sexes are therefore probably aggregated as “bushtoppers” ( Stewart 1994) and males find females through duetting with vibrational communication on woody substrates ( Stewart 2001).

Oviposition was observed and videotaped near the Placerville bridge on July 3 rd, 1999, from 11:30 to 14:00. Forty-three ascending and descending, “undulating”, flights were observed, either originating from the riparian forest vegetation to the water, or returning from the water back to the forest. Ambient temperature increased from 25°C at 09:00 to 31°C at 12:15, river temperature held constant at 11°C, and the sky was variable throughout the day, from slightly cloudy to clear and sunny. The tallest trees observed in return flights were engelman spruce, estimated to be between 23–30 m in height. Descending I. zionensis   females were observed landing on the river surface and were quickly swept from view. We have interpreted this behavior to indicate that females release eggs on water contact although the flights were of such height, quickness and over the river that females could not be caught before and after touching the water to verify this. DeWalt and Stewart (1995) did observe females fluttering on the surface of the Rio Conejos, Colorado, to release their black egg masses. In interesting contrast during the same San Miguel River observation period, female Pteronarcella badia   were observed releasing and dropping egg masses from about 2 m above the river.

Their first and second masses had average number of eggs of 499.2 ± 176.1 and 175.5 ± 78.9 respectively. These first masses took several hours to nine days to be extruded from the genital opening located at the rear of the 8 th sternum. Three females, whose ages ranged from several hours to 6 days at the time of mating, produced a third egg mass that had a lower average count of 50.0 ± 22.9 eggs and took an average of 7.7 ± 3.2 days to be produced after mating ( Table 1 View Table 1 ).

These egg mass results compare favorably in number of egg masses produced per female with those reported by DeWalt and Stewart (1995), but averaged fewer per 1 st, 2 nd, and 3 rd mass. Several natural variables such as degree day accumulation and nymphal diet may help to explain the 27–85% difference in fecundity between the San Miguel River and the Rio Conejos ( DeWalt and Stewart 1995), Colorado populations.

Nymphs: First instars (Fig. 7) were unpigmented, had nine antennal and three cercal segments, and overall mean interocular distance was 0.22 ± 0.2 mm (N=114). Early instar nymphs (N=109) first appeared in samples May 29, 2000 ( Fig. 5 View Fig ) when average stream temperature was 8.5°C, and incubation experiments indicated that these were from the previous year eggs. Nymphal growth rates were exponential when transposing the May, 2000 field collected and March–July, 2000 laboratory hatched, early instars onto the 1999 growth curves ( Fig. 5 View Fig ). Nymphs were approximately half grown by October to December, and greatest growth occurred from June to December and decreased from March to May ( Fig. 5 View Fig ). Fastest growth occurred initially as temperature began to decrease from 13°C in July, to 0.5°C in December 1999. Slowed growth occurred during the coldest months (December–March) then decreased until emergence.

Nymphs reached maximum size on March 12, 2000, when temperature was 3°C. As temperature increased to only 8°C on June 24, growth declined until emergence in late June. The decline in growth was possibly due to small sample size, or that the larger, more developed nymphs moved to different microhabitats and escaped sampling or had already emerged. Several larger, more developed nymphs (interocular distance> than 2.6 mm ♂, and 3.2 mm ♀) were collected during this period of declining growth and adults had begun to emerge. A large size range throughout the seasonal growth period was observed as previously reported in other studies ( Hynes 1970, Oberndorfer and Stewart 1977). Differential growth rates, extended egg hatching or recruitment periods, and sexual dimorphism among individuals probably contributed to the observed range in size of nymphs.

From the Shakarjian (1997) study and our observations of direct hatching in a nearby Leopard Creek population ( Fig. 1 View Fig ) to extended diapause in this San Miguel River population and Rio Conejos population ( DeWalt and Stewart 1995), it appears that I. zionensis   has a great capacity for egg development ranging from direct hatching to diapause over several years (Sandberg and. Stewart 2004) resulting in either univoltine or variable-length semivoltine life cycles. The currently available data from these studies suggest this range may be genetically determined and expressed in a single egg mass from a female, or that given populations may, due to temperature regimes, or other factors, have adopted a homodynamic, heterodynamic, or combination egg development strategy. The lack of direct hatch of year 1999 and 2000 eggs in this San Miguel River population suggest that it has adopted a semivoltine strategy. Fig. 4. Male and female presence and exuviae counts from two bridge abutments on the San Miguel River, Placerville, CO, 1999; and total counts of residual exuviae on the bridge for years 1998 and 2000, collected on 11-VI-1999 and 08-VII-2000, respectively. 1999 oviposition observations indicated by triangles were made on 03 and 06, July, when water temperature was 12°C and air temperature was 26°C.

Fig. 4. Male and female presence and exuviae counts from two bridge abutments on the San Miguel River, Placerville, CO, 1999; and total counts of residual exuviae on the bridge for years 1998 and 2000, collected on 11-VI-1999 and 08-VII-2000, respectively. 1999 oviposition observations indicated by triangles were made on 03 and 06, July, when water temperature was 12°C and air temperature was 26°C. 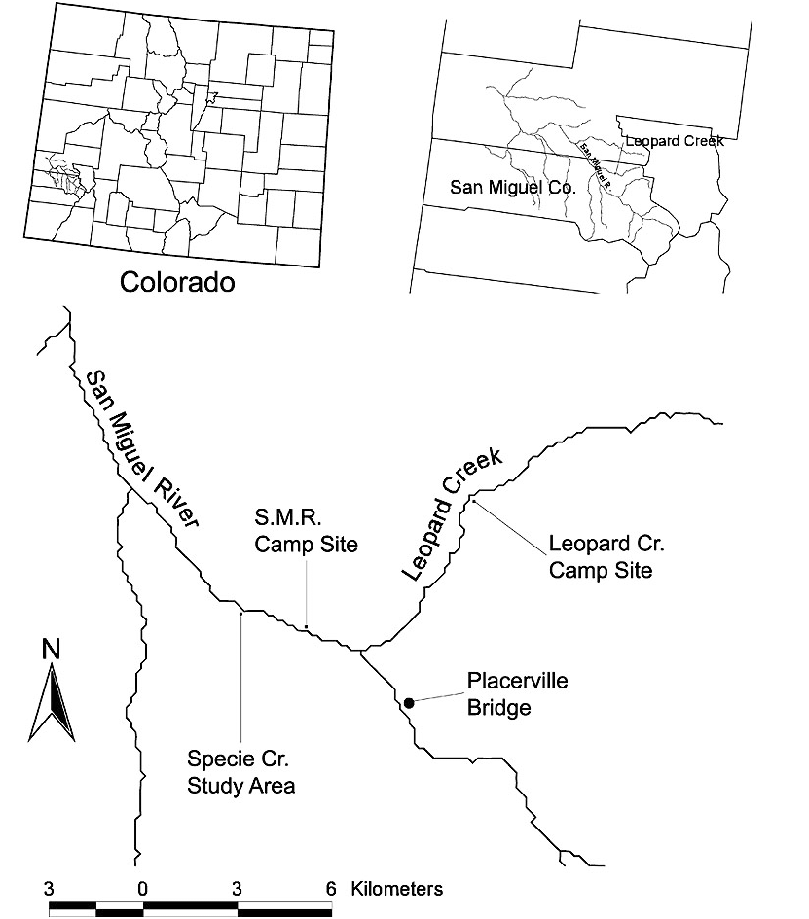