French: Babiroussa des Célebes / German: Sulawesi-Hirscheber / Spanish: Babirusa de Célebes Taxonomy. Babyrusa celebensis Deninger, 1910   , Sulawesi. Phylogenetic studies suggest that babirusas diverged from other pigs in the Miocene some 10-19 million years ago, which could well be the time when they became isolated on Sulawesi. The land connection between southern Sulawesi and Borneo was severed some 50 million years ago, so this suggests that a later land connection existed between Sundaland and Sulawesi, unless babirusas dispersed through rafting or swimming. The presence of two other suid genera in Sulawesi (Celebochoerus and Sus   ), which must have split off from the main stock of Suidae   at different times, indicates several invasions of ancestral suid types to Sulawesi over a great length of time. The genus is considered to be monotypic within the subfamily Babyrousinae   , or, alternatively, to form a tribe, Babyrousini   , of the subfamily Suinae   . Until recently, all babirusas were classified as a single species, B. babyrussa   . However, the genus has now been split into several species, and the nominate scientific name is restricted to the Moluccan Babirusa from Buru and the Sula Islands. B. celebensis   , the Sulawesi Babirusa, is the best known babirusa, and the only species for which substantial ecological and behavioral information is available. B. celebensis   specifically refers to animals from the north of the island, and the taxonomic identity of the individuals from central, eastern and south-eastern Sulawesi remains undecided. No subspecies are recognized.

Descriptive notes. Head-body 85-110 cm, tail 20-32 cm, shoulder height 65-80 cm; weight up to 100 kg. B. celebensis   is characterized by its sparse or absent body hair, a nearly hairless tail tuft, and long, relatively thick upper canines that emerge vertically, converge slightly, and curl dorsally in a circle. The upper canines of males are generally long and thick. They merge vertically and do not cross the lower canines in lateral view. The skulls of B. celebensis   are longer than the two other species. They are relatively narrower than one specimen from central Sulawesi, for which the taxonomic status remains unresolved. The lower (M, and M,) and upper (M* and M?) molars in B. celebensis   are longer than in the other two species. Unlike most other pig species, babirusas do not have the typical adaptations for rooting. The nose lacks the rostral bone that in other pigs provides support for the tough connective tissue plate of the rhinarium. Reanalyses of the soft tissue anatomy of the limbs and digestive tract of B. celebensis   have revealed mistakes of identification in earlier work. This has reversed the earlier conclusion that babirusas were constructed in a significantly different way from pigs (Susspp.); in general the muscular anatomies are similar and the stomach of babirusas does not resemble that of ruminants.

Habitat. B. celebensis   inhabits tropical rainforest. Whereas previously the animal had been reported to occur in low-lying areas near coasts, recent anecdotal and survey reports indicate that the species is now confined mostly to the interior, on higher and less accessible ground. Although often associated with swamp and riverine areas, there is still insufficient data to be conclusive on the aquatic affinities of the species. The species frequently uses mineral salt licks.

Food and Feeding. Diet and feeding behavior in B. celebensis   remain poorly studied in the wild, but observations on captive animals provide a useful picture of their potential diet. The anatomical structure of the stomach and digestive tract suggest that B. celebensis   is omnivorous. In zoos, adults ofthis species have been observed to chase, catch, and eat small mammals and birds, implying that they may show similar behavior in the wild. Observations of both wild and captive individuals suggest that the species consumes a wide variety ofleaf, root, and fruit material, with fruit especially important. Their jaws and teeth are strong enough to crack very hard nuts with ease. Not unlike the Bornean Bearded Pig ( Sus   b. barbatus   ), the apparent requirement of B. celebensis   for fruit-bearing trees as a component ofits environment has been implied, because as soon as mature trees were cleared by forestry operations or conversion to food crop production, the babirusas were no longer to be found in the area. Whether this is a result of changes in food resources or increased hunting pressure and disturbance from logging crews has not yet been clarified. B. celebensis   forages for food items on the ground, under logs and stones, in wet areas, and on bushes and trees. Animals will stand with their forelimbs against tree trunks to reach hanging leaves and fruit, and will even balance on their hindlimbs to pluck leaves from the trees.

Breeding. In zoological collections, B. celebensis   may become sexually mature as early as 5-10 months of age. However,it is likely that the age of sexual maturity in the wild is influenced by a number of factors, including the level of nutrition. Precise data do not yet exist, but animals are unlikely to breed in the wild before they are one year old. Estrous cycle lengths of 28-42 days have been recorded, but recent endocrine studies suggest a narrower range of 35-37 days. Captive females generally re-cycle within three months after the birth of their young. Estrus lasts 2-3 days, and the female is not receptive to males at other times. Gestation length is usually 155-158 days, though up to 171 days has been reported. The body weight of the sow increases during gestation. The normallitter size in B. celebensis   is one or two, but a low incidence of triplet births has been recorded both in zoos and in the wild, and a litter of four fetuses has been reported in utero in a wild female. Neonatal B. celebensis   are uniformly brown in color, small in size, and weigh less than 800 g at birth. The female usually has four mammary glands, but an additional pair has sometimes been reported. Although females can have a life span of as long as 24 years in captivity,it is unlikely that animals in the wild live as long, perhaps no more than 7-12 years. In zoos, B. celebensis   sows produce young at all times of the year, and may produce two litters within a twelve-month period. However, since it seems likely that diet or seasonal factors would normally influence interbirth intervals, litters may be produced less frequently in the wild. Observation in North Sulawesi revealed adult females accompanied by subadult animals as well as juveniles. However, there was no way to establish whether or not these youngsters represented the progeny of consecutive litters from the same female. Studies of the agonistic behavior of B. celebensis   have so far revealed no evidence that the adult males use their teeth during male-male interactions. The ultimate form of agonistic behavior is described as “boxing,” and involves two males raising themselves off the ground until both are standing on their hindlegs facing one another, each leaning and paddling against the chest and shoulders of his opponent. Their snouts are held as high as possible. Females do not employ the same strategy.

Activity patterns. Based on observations of captive animals, B. celebensis   appears to be mostly diurnal. These animals slept at night, which is consistent with the general lack of activity at night recorded in North Sulawesi. About an hour before sunrise at 06:00 h, individuals began to wake up and move about. Voiding of fecal material and urine occurs at this time, and the animals appeared to prefer to defecate under branches and fallen tree trunks. Foraging extended throughout the day, but occupied a larger proportion of the time in the morning. From about mid-morning onwards an increasing proportion of the time was taken up with non-foraging activities. The animals were either wallowing or lying down. Both in the wild and in captivity, males have been observed to wallow more often than females.

Movements, Home range and Social organization. The information available from field and captive studies indicates B. celebensis   is a social species. Groups of up to 13 have been observed in the rainforest, especially around water, communal wallowing areas, and salt licks. Rarely aggregations as large as 46 individuals comprising several distinct groups have congregated at salt licks. Most (84%) of all sightings of solitary animals were of adult males. Single adult males were seen with single adult females, but never with two or more females unless young animals were present. Adult females were rarely seen without company; they were sometimes found together with other adult animals, but most often they were with young babirusas. Of the 226 groups studied, 84 contained adult females and young. Two thirds (56) of these groups had no adult males present. Very little is known about the ranging behavior of B. celebensis   . Field observations suggest that the adult males have home ranges that overlap with those of a number of other adult males. Density estimates in two protected areas where the species still occurred in 2003 varied from 4-3-11-8 ind/km? to 0-7-4-1 ind/km?. Like other pigs, babirusas evidently swim well. A single adult male was reported approximately 500 m from the shore of a large lake in central Sulawesi. It is not certain whether this individual was B. celebensis   , but it is likely that all babirusa species can swim and cover relatively large distances.

Status and Conservation. CITES Appendix I, although international trade in this species is not thought to be an important issue. Classified as Vulnerable on The IUCN Red List. Adult B. celebensis   appear to have few,if any, natural predators. There are no large native mammalian carnivores on Sulawesi, and the most likely non-human predators are probably large snakes and crocodiles. We here follow The IUCN Red List and treat all individuals occurring on Sulawesi, as well as those previously known from the Muna, Buton, and Lembeh Islands as belonging to B. celebensis   , pending resolution of the taxonomy. B. celebensis   has been much reduced on the northern peninsula of Sulawesi, primarily due to overhunting, and its distribution may now be largely limited to the western end of the Bogani Nani Wartabone National Park, the Nantu Wildlife Reserve, and the Panua Nature Reserve, all of which are in the western half of the northern peninsula. The species still occurs in central Sulawesi and the eastern and south-eastern peninsula, although precise information regarding the current extent of occurrence and area of occupancy is lacking. The species is unlikely to remain on the severely deforested southern island of Muna. On Buton the species was not found during recent mammal surveys, and its continued presence on the island of Lembeh is also uncertain. The small numbers of young born suggest that the species is not adapted to a high rate of natural predation. However, hunting by humans with snares, nets, spears, and dogs has undoubtedly been an important factor since prehistoric times, and widespread snare trapping constitutes the main threat to the remaining populations of B. celebensis   in North Sulawesi and, more recently, elsewhere in Sulawesi. B. celebensis   is apparently not hunted specifically for its own meat, but represents a by-catch to the hunting of the Sulawesi Warty Pig ( Sus celebensis   ). Therefore, the population of B. celebensis   in the wild is being placed under severe and increasing pressure by the market demand for wild pig meat. The species is also increasingly threatened by commercial logging, and by the spread of other land-uses resulting in forest conversion and degradation. Total lowland forest loss on the island is estimated to be likely more than 75%. The genus Babyrousa   was accordedfull protection under Indonesian law in 1931. B. celebensis   occurs in several protected areas of various levels on Sulawesi, including Bogani Nani Wartabone National Park, Lore Lindu National Park, Rawa Aopa Watumohai National Park, the Nantu Wildlife Reserve, the Panua Nature Reserve, Morowali Nature Reserve, and others. 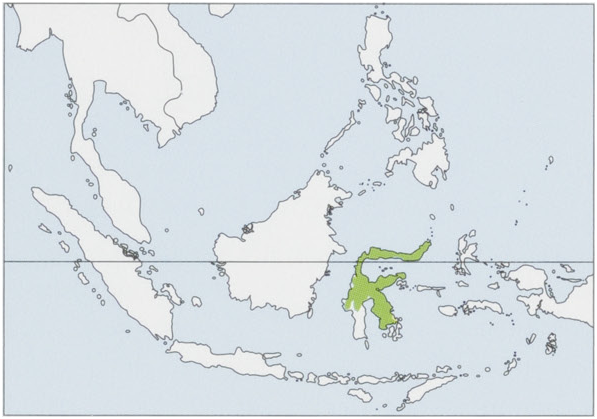