Chiococca grandiflora   differs from other members of the genus by its relatively larger, showy white flowers in compact cymes of 3-9, and its infundibuliform corollas 16-20 mm long with tubes 13-17 mm long and lobes 3-3.5 mm long.

Chiococca grandiflora   displays some variation in vegetative and floral pubescence. We were at first inclined to select as holotype the most amply floriferous specimen, from Sinaloa 2 miles W of El Palmito collected by Sally Walker s.n. on 1 September 1970 (UTC-00263027), since there is a putative duplicate of this collection (ARIZ-181630; gathered at the same locality on the same date). However, the UTC specimen has uniformly short-hirtellous twigs, leaves, and inflorescences with white trichomes 0.05-0.1 mm long (Figure 1C View Figure 1 ), compared with the ARIZ specimen which is essentially glabrous except for the calyx lobes having ciliate margins. Although the collections presumably were gathered from the same population, they were almost certainly taken from different individuals. In any case, it suggests that pubescence is variable in this species, and this variation is encompassed by the description above. The other Sinaloa specimens, T. Walker s.n (Rock Slide, El Palmito, ARIZ-212520) and S. Walker 70,043 (19 km W of El Palmito, K), and the type collection from Sonora are all similarly glabrous. Field studies would help elucidate this variation. However, localities of the known populations in Sinaloa are remote and those in Sonora are rugged and relatively difficult to access (Figures 4 View Figure 4 , 5 View Figure 5 ). The variation in pubescence documented here is not unusual for a species of Chiococca   .

Regarding the type collection, Paul Martin was most likely the actual collector, although Martin did not assign numbers to his collections, only dates. Consequently, Phil Jenkins catalogued the specimen and assigned it his number 92-135. The paratype collections by Sally Walker (and Tim Walker) are from near the Durango border and were originally designated on the specimen label as either "west of El Palmito, Durango in Sinaloa" or "near El Palmito, in Durango" as the state line was not exactly known. El Palmito and immediate surroundings are in Sinaloa, however, and the state line is farther east than they realized.

The relationships of Chiococca grandiflora   within its genus are unclear, along with those of all the other species, and molecular phylogenetic studies have not yet been undertaken for the genus. Based on its exceptionally large corollas, this new species does not closely resemble any of the three other species occurring in northern Mexico. Chiococca henricksonii   M.C.Johnst. is a distinctive, narrowly endemic microphyllous species from Coahuila having tiny leaves with petioles 1-2 mm long, blades 4-9 mm long, and small solitary flowers with corollas only 7 mm long. Chiococca petrina   Wiggins ranges from central Sonora to Chihuahua and Sinaloa. It also has relatively small puberulent leaves with petioles 1-2 mm long, blades 0.6-2 cm long, and much smaller, externally puberulent corollas 4-6 mm long with lobes about half as long as the tube. The widespread and variable Chiococca alba   reaches its northernmost range in southern Florida, the southern tip of Texas, and also occurs in the Río Mayo region of Sonora. It differs in having inflorescences with more numerous flowers borne on a longer floral rachis and much smaller, externally glabrous corollas 6-8 mm long. Leaf size is extremely variable with petioles 3-10 mm long and blades 1.3-13 cm long, usually glabrous except the margin sometimes minutely hirtellous. Considering its morphological variability, C. alba   may be most closely related to C. grandiflora   .

[Description by George M. Ferguson based on field notes and collections made at Tepopa, Sonora on 18 March 1992 and 16-17 March 1993 with Mark Fishbein, and from El Palmito, Sinaloa 12-13 April 1999 with Andy Sanders. The El Palmito site was visited by T. Van Devender in October 2017.] Chiococca grandiflora   occurs in strikingly similar habitats at two known localities, despite a 500 km latitudinal distance apart on the Pacific versant of the Sierra Madre Occidental (Figure 3 View Figure 3 ). Both are at the lower edge of pine-oak forest within a mountainous country of thick ignimbrite deposits of rhyolite and volcanic ash. Deep barranca canyons support a diversity of vegetation here where tropical and temperate zones intermix in a region subject to substantial rainy seasons in summer and winter, interspersed by marked dry seasons especially in late spring.

The paratype localities near El Palmito are along a ridge with a divide on the rim of a spectacular, immense barranca system draining toward the northwest and another to the south. The north-facing slope of the barranca heading here has a resemblance to a cloud forest with dominant trees being Abies durangensis   Martínez, Quercus laurina   Bonpl., Q. mcvaughii   , Q. rugosa   Née, Cornus disciflora   Moc. & Sessé ex DC., Magnolia schiedeana   Schltdl., Ostrya virginiana   K.Koch, Prunus serotina   Ehrh., Tilia mexicana   Schltdl., with species of Clethra   Gronov. ex L., Cercocarpus   Kunth, Cinnamomum   Schaeffer, and Ilex   L. At the old Rancho Liebre is an orchard and other ornamental plantings such as Sambucus nigra   L., Hesperocyparis   Bartel & Price, Iris   Tourn. ex L., and Rosa   Tourn. ex L. At the most southern paratype locality 19 km west of El Palmito, which is near the Tropic of Cancer at 1890 m along Mexico Highway 40, the vegetation here (23.466, -105.831) is lower pine-oak forest with Pinus oocarpa   Schiede ex Schltdl. and Pinus yecorensis   as the dominant pines and near the lower limit of Pinus herrerae   with an abundance of oaks including Quercus   macvaughii, Q. obtusata Bonpl., and Q. tarahumara   Spellenb., J.D.Bacon & Breedlove, with Arbutus xalapensis   , and Arctostaphylos pungens   Kunth.

The more northern holotype locality for Chicocca grandiflora   is at Tepopa, Sonora at 1100-1400 m, which is ca. 500-1000 m lower in elevation than the paratype localities (Figure 5 View Figure 5 ). It is also situated in a steep northwestward draining barranca, at the ecotone of upper tropical deciduous forest including riparian evergreen forest, and lower edge of pine-oak forest with Pinus oocarpa   and Quercus tarahumara   with Dodonaea viscosa   Jacq. The orchard site of Tepopa (27.3261, -108.7316) is an old ranch homestead perched above an intermittent stream at 1100 m elevation. The type specimen was probably collected along a trail between this site and the forested mesa top at 1400 m (Figure 5 View Figure 5 ). From San Bernardo, Sonora into the Sierra Madre was a trail route for mule cargo that passed by here until early in the last century. Howard Scott Gentry visited this site in 1935-36 and made plant collections. An orchard, planted on a steep slope with rock lined terraces around seeps, was abandoned when Gentry visited. Paul Martin and stu dents from the University of Arizona revisited this famous Gentry collection locale in 1992-93 ( Martin et al. 1998) and found growing in the abandoned orchard avocado, banana, grapefruit, mango, orange, peach and pomegranate trees, and cultivars of native Casimiroa edulis   La Llave and Tecoma stans   (L.) Juss. ex Kunth. 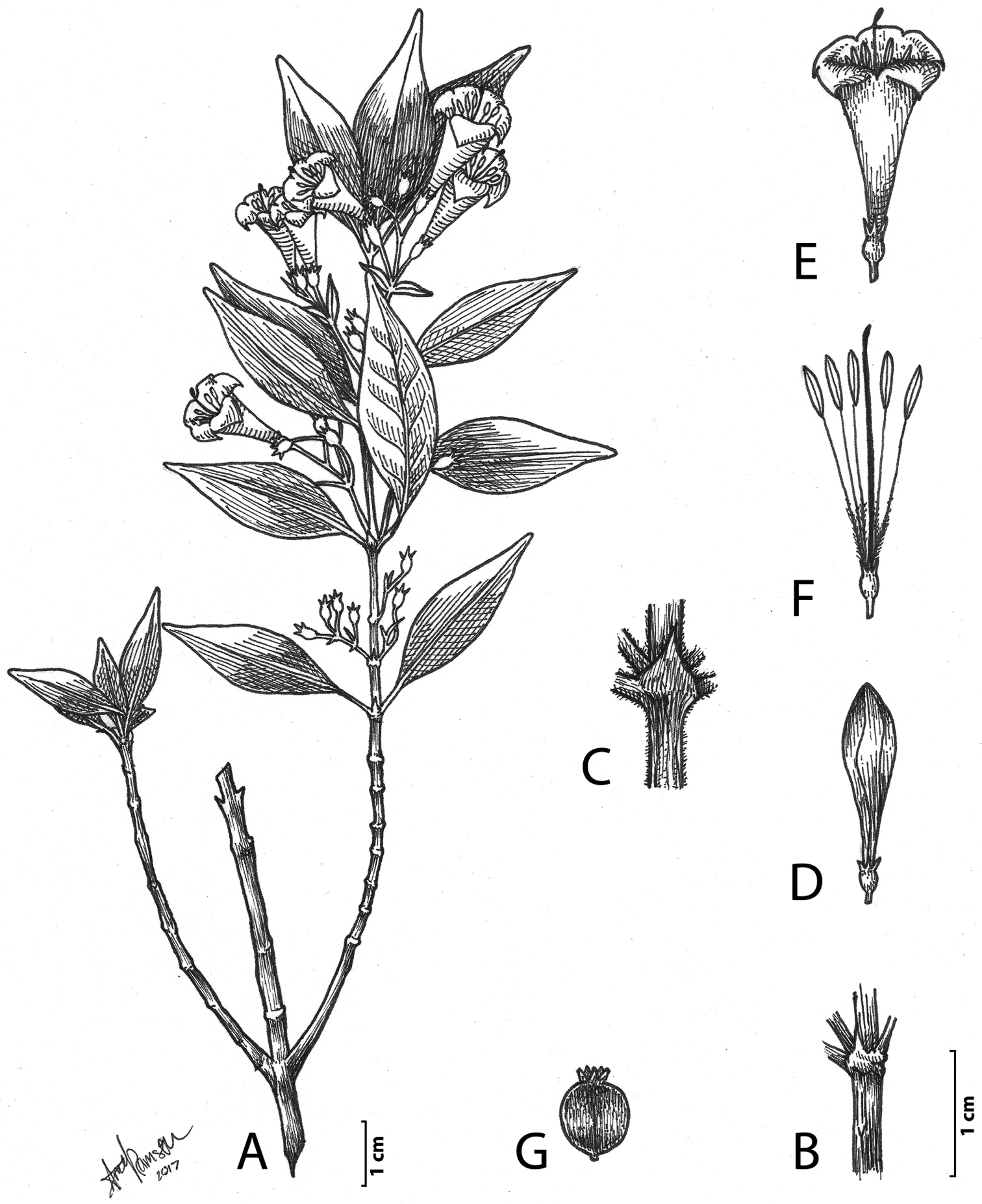 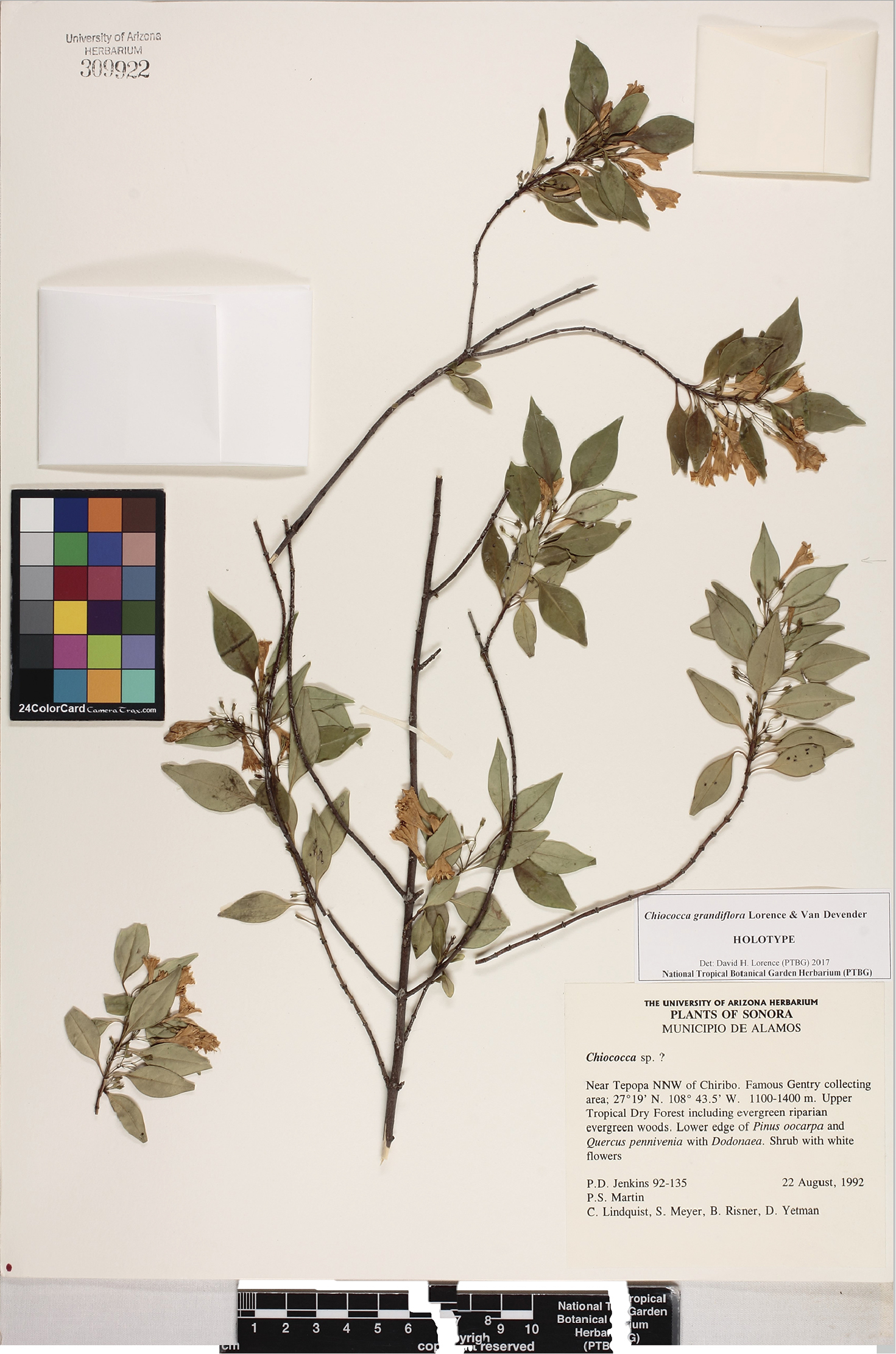 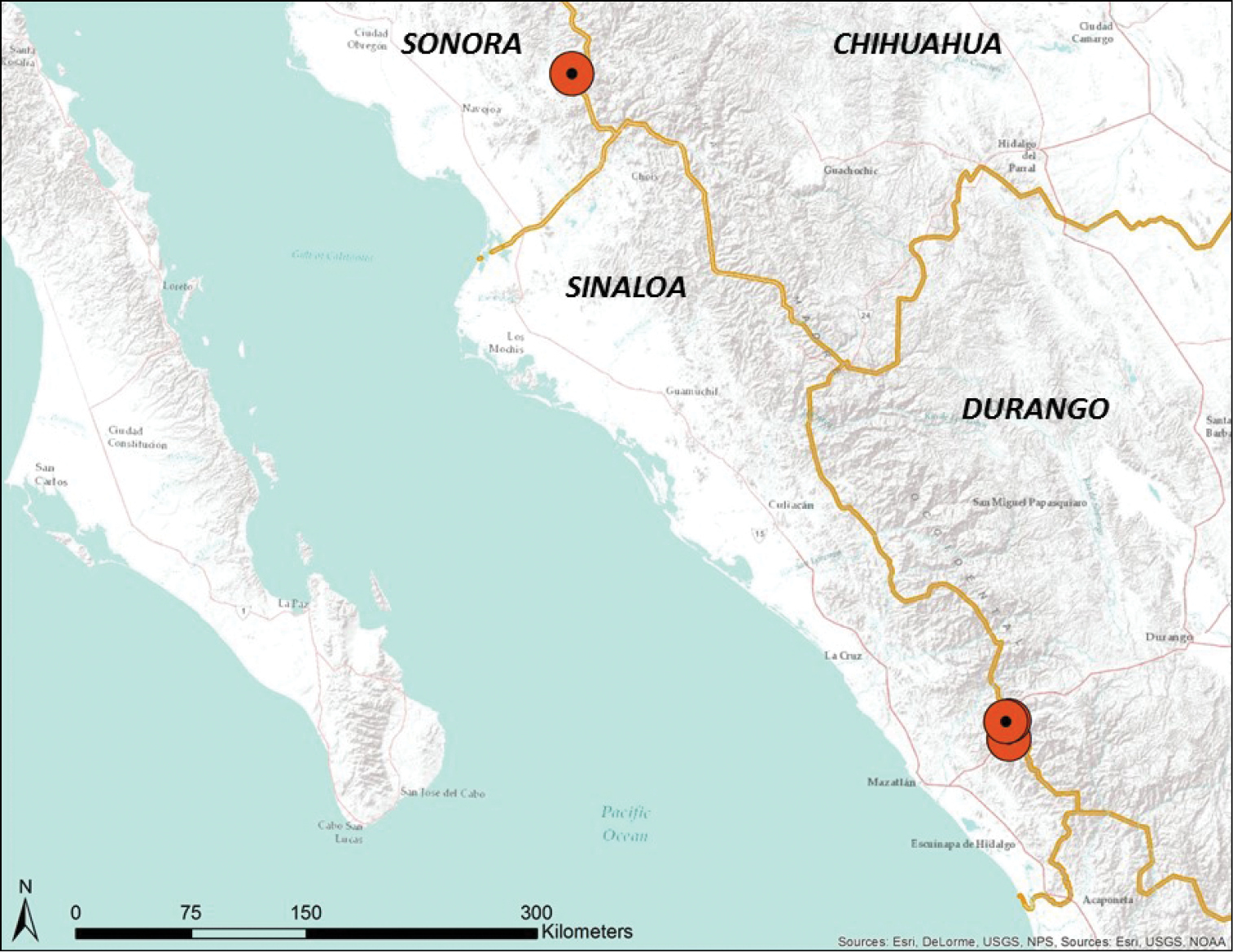 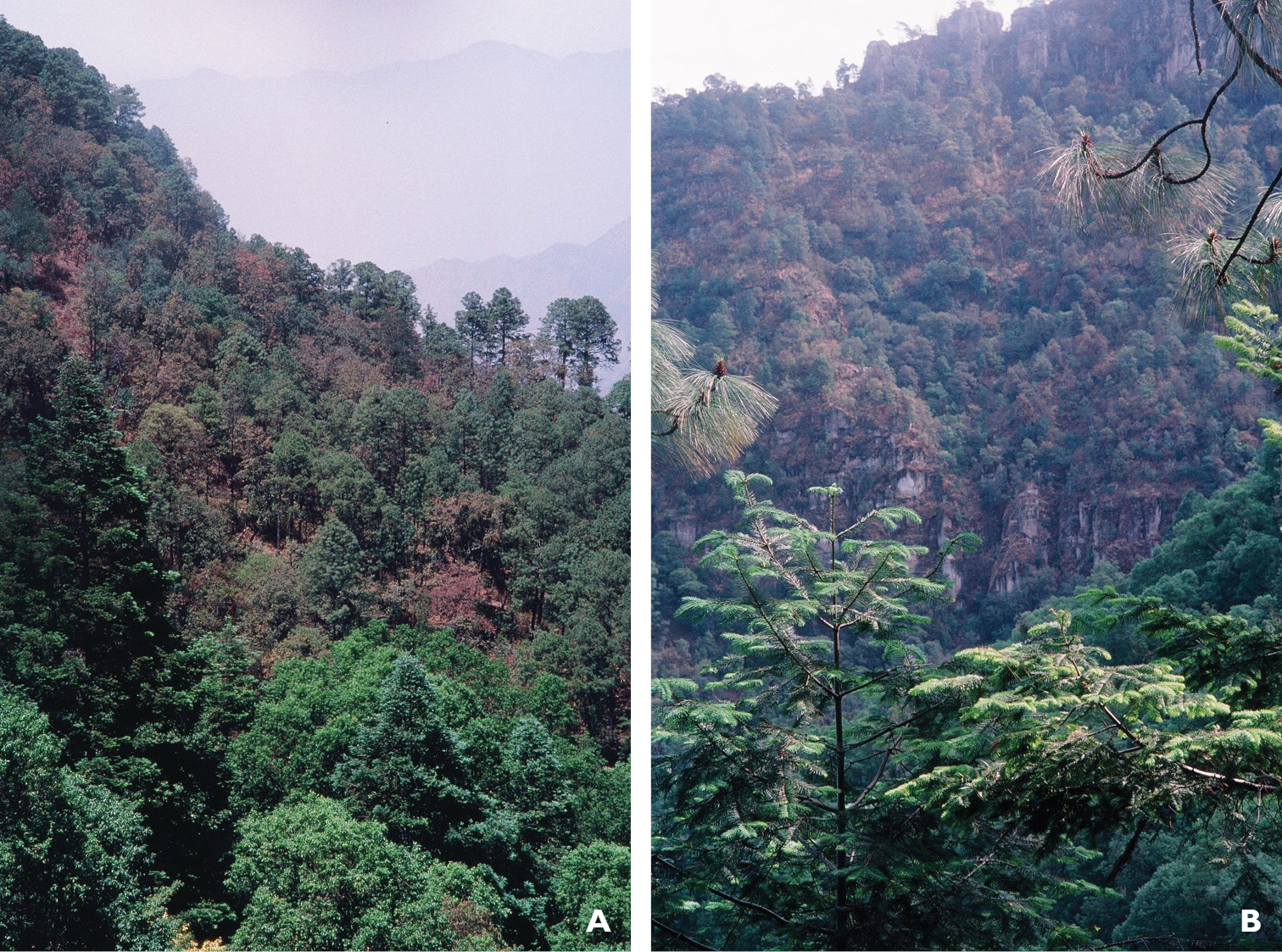 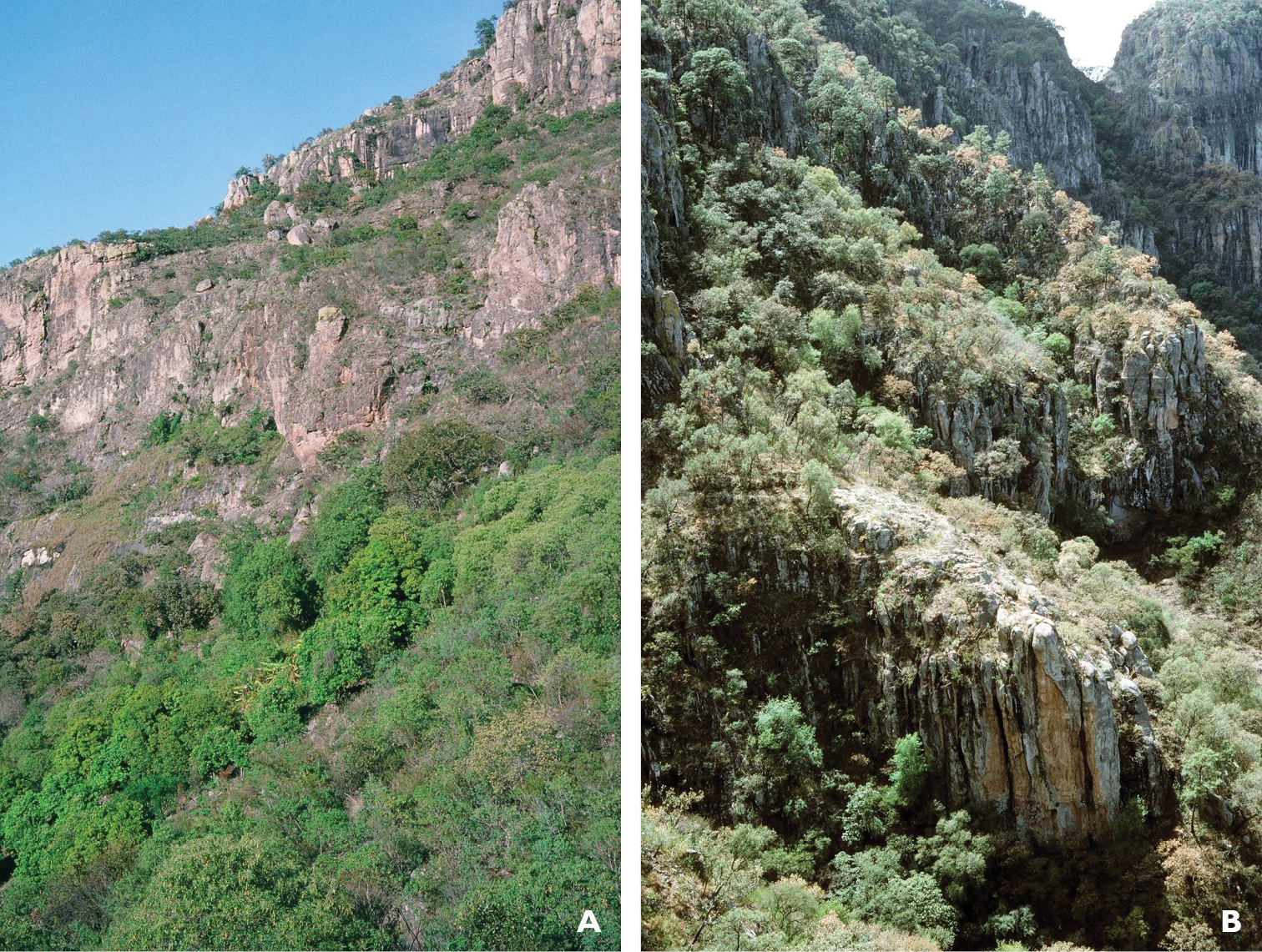 Figure 5. Habitat of Chiococca grandiflora in vicinity of holotype location near Tepopa, Sonora, at ecotone of upper tropical deciduous forest including riparian evergreen forest, and lower edge of pine-oak forest. 5 a showing abandoned orchard with fruit trees including bananas near center.