Description. Body mid-sized (19 mm) ( Fig. 6A View FIGURE 6 ), color grey, banded frons, top of the head and between the eyes dark brown; pronotum dorsum with black bands along frontal and posterior margins; lateral lobes with the downward arching broad with a black band through the middle section; forewing with pale veins and darker cells; legs distinctly banded. Head wider than pronotum, rounded and smooth; almost as wide as high in frontal view; vertex convex; fastigium almost 0.5 times as wide as scape; eyes ovoid, not protruding; ocelli rounded, frontal ocellus reduced in contrast to lateral ocelli; antennal sockets located at the level of the lower margin of the eyes; maxillary palps elongated in comparison to the other genera of the subtribe, the last segment dilated and with a rounded apex.

Thorax. Pronotal disc as wide as long, covered by small bristles; anterior and posterior margins straight; lateral lobes squared, as wide as high, and with rounded margins. Legs elongated and thin, fore tibia with a small inner and a small outer tympanum, and with two apical and ventral spurs, small compared to tarsomeres; mid tibia with two ventral apical spurs; hind tibia with three inner subapical spurs, the mid apical spurs longer than other two ones of the inner and outer margins, ventral and dorsal outer spurs of both sides subequal; hind tarsomeres with a single row of spines, and distally armed with a spur. Wings surpassing the apex of the abdomen, apical area very long. Male tegmina: mirror and harp slightly membranous, with a similar thickness to the rest of the tegmina and with reduced size; dividing veins moderately defined, harp with five veins and mirror with five cross veins ( Fig. 6A View FIGURE 6 ). Female tegmina: CuP vein, clearly dividing the anterodorsal margin of the tegmina; dorsal field with numerous transverse veins. Abdomen. Male and female epiproctus without processes or notable modifications; cerci extremely long, 1.5 times longer than the body; female ovipositor well-developed, as long as the hind femur, without apical modifications. Male genitalia. Pseudepiphallus fused as an almost tubular section ( Figs. 6B–D View FIGURE 6 ), most notably in dorsal view and with striae or channels in the distal area, in ventral and lateral view ( Fig. 6B View FIGURE 6 ). Pseudepiphallic arms long, slightly branching at the apex ( Fig. 6C View FIGURE 6 ), lateral margins wavy, apex obliquely truncated in ventral view; median lobe rectangular in lateral view, lateral lobe with a long spine, almost as long as the medial prolongation of the pseudepiphallus ( Fig. 6D View FIGURE 6 ); ectophallic fold membranous, thin, and not surpassing the apex of the median prolongation of pseudepiphallus; endophallic sclerite broad, membranous and translucent ( Fig. 6C View FIGURE 6 ), ectophallic apodeme thin and short; rami longer than the ectophallic apodeme ( Fig. 6B–C View FIGURE 6 ), curving inward at the dorsal margin and apex. Female. As the male in appearance and coloration. Dorsal area of the tegmina with parallel veins, the area between the CuA vein and the anal border with poorly defined veins ( Fig. 6E View FIGURE 6 ). Elongated cerci, twice as long as the body. Slender ovipositor and a little longer than the posterior femur, without modifications.

Etymology. This new genus is dedicated to the memory of Anastasio Alfaro González (1865‒1951), for his valuable contributions to Costa Rican science, and the creation of the National Museum of Costa Rica, the institution he directed from 1887 to 1930. The dedication of this genus also involves his great-great-grandson Jim Córdoba Alfaro, who has followed in the footsteps of Anastasio Alfaro and makes valuable efforts to contribute to the conservation in Costa Rica. The Latin word – gryllus is added to the end of the genus name, which means “cricket” and is usually used in cricket names. Although the last component of the name is masculine, the gender of the name is being established as neuter.

Comparison. This new genus differs from the other genera of the Paragryllina subtribe by the texture and thickness of the tegmina, thicker than in the other taxa, and very long cerci, 1.5 times longer than the body (the cerci of the other genera it does not exceed the total length of the body) ( Fig. 6A View FIGURE 6 ). Regarding the male genitalia, Alfarogryllus n. gen., contrasts with the other genera of the subtribe, because the medial portion of the pseudepiphallus is prolonged as an aedeagus, the lateral lobe is cylindrical and elongated ( Figs. 6B–D View FIGURE 6 ), which is absent in the other taxa. Although the lateral lobe of Paragryllus s.l., is medium or small-sized, the pseudepiphallic arms have a similar appearance as Paragryllus (Melloius) temulentus ; they are parallel throughout their length and do not intertwine from the mesal portion to the apex, as in Paragryllus s.s. and Paragryllus (Souzaius) minutus . 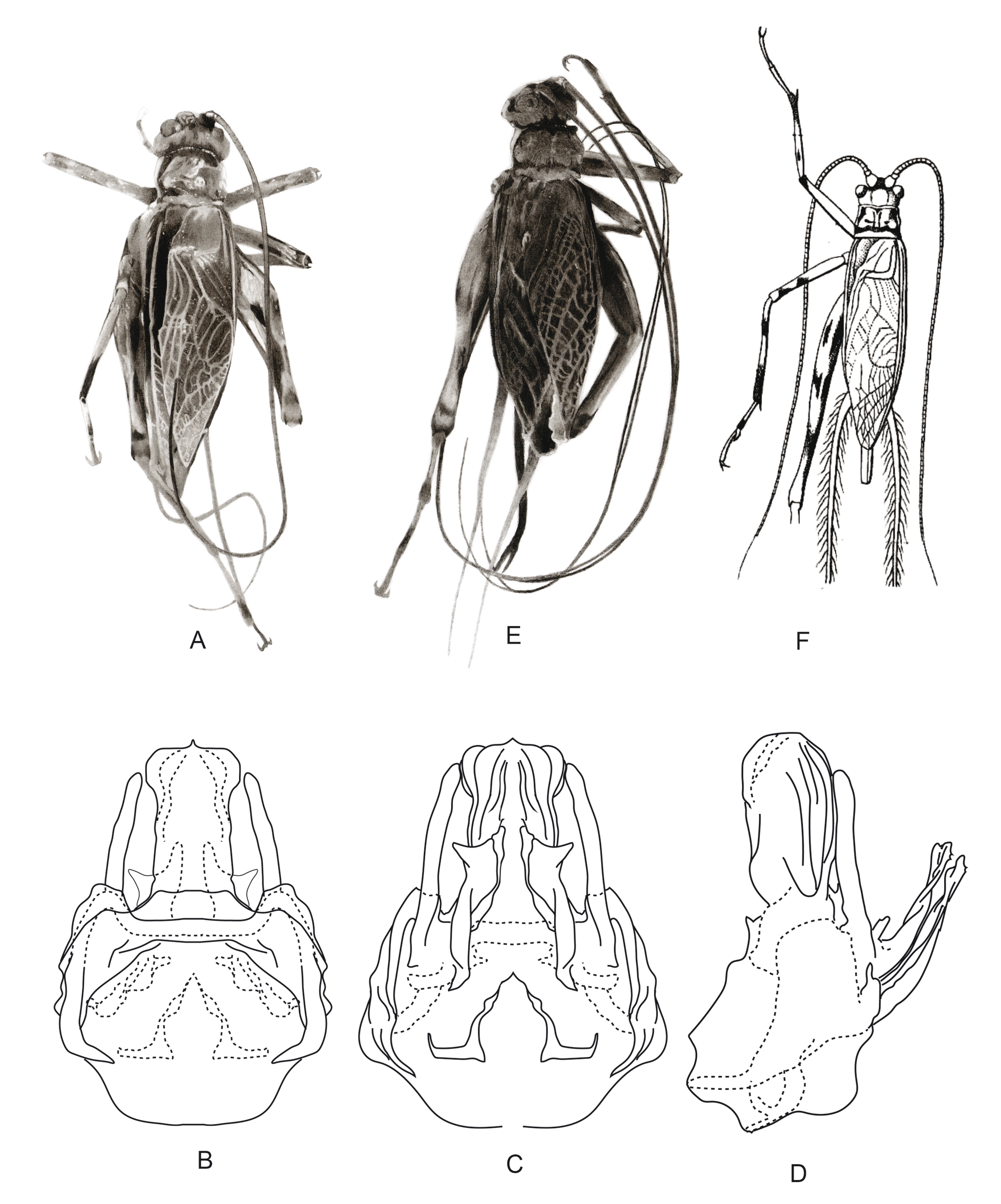