Wedmann, Sonja & Makarkin, Vladimir N., 2007, A new genus of Mantispidae (Insecta: Neuroptera) from the Eocene of Germany, with a review of the fossil record and palaeobiogeography of the family, Zoological Journal of the Linnean Society 149 (4), pp. 701-716: 703

Remarks: The species of the subfamily Symphrasinae   are easily distinguished from others of the family, in particular by a short Sc that always terminates within the pterostigma, so that the pterostigma is located between R1 and the costal margin. In other mantispids (except Mesomantispa   ) the Sc approaches R1 and terminates distal to the pterostigma (the latter is always located anterior to Sc). The majority of extant symphrasine species have been examined, with no exceptions found (K. M. Hoffman, pers. comm. 2004; V. N. Makarkin, pers. observ.). Some published drawings incorrectly imply that Sc is bent to R1 and then fused with R 1 in the subfamily (e.g. Tjeder, 1959: fig. 244; Willmann, 1990: fig. 16; Hoffman, 2002: fig. 537). In symphrasine species the terminal portion of Sc, and generally the veins within the pterostigma, are inconspicuous. Sc seems to disappear distal to 3sc-r1, making it appear to terminate on R1. Although it is often poorly visible, in all species the Sc actually continues distal to 3sc-r1. This can be deduced from the observation that a number of veinlets terminate on C within the pterostigma (i.e. distal to 3sc-r1), but because they do not arise from R1, this probably indicates the presence of the Sc distal to 3sc-r 1 in these species. In Mesomantispa   , the Sc appears to also terminate at R1, but the true relationship is unclear (see below). The structure of the distal part of the Sc in the Symphrasinae   is similar to that of some Rhachiberothidae   and Berothidae   , in that the Sc is far removed from R1 and often poorly discernible (it is sometimes atrophied) distal to 3sc-r (e.g. Aspöck & Mansell, 1994: fig. 43 for Rhachiberothidae   ; Archibald & Makarkin, 2004: fig. 3 for Berothidae   ).

The relationships of Rhachiberothidae   and Symphrasinae   remain unclear. They are obviously closely related (e.g. Tjeder, 1959; Willmann, 1990, 1994; Aspöck & Nemeschkal, 1998), and the question asked by Tjeder in 1959 remains relevant: ‘is Symphrasis   [sic, read as Symphrasinae   ] really as closely related to the other Mantispidae   as to be included in that family?’ ( Tjeder, 1959: 275). This problem is, however, outside the scope of this paper (see also below under Whalfera   ).

The Symphrasinae   are considered to be the sister group of [ Drepanicinae   + ( Calomantispinae   + Mantispinae   )] and they are regarded to be the most plesiomorphic mantispids ( Lambkin, 1986a). We believe that the latter concept requires some re-examination, however. Indeed, some character states of their venation and prothorax are plesiomorphic in the family [compare characters (5), (15), and (16) of the subfamily diagnosis – additionally, the humeral veinlet in the forewing is recurrent and the anterior part of the pronotum is not closed ventrally (i.e. not tubular) in some species]. Symphrasinae   , however, possess more numerous and striking apomorphic character states in their venation and in the structure of their foreleg and abdomen [characters (1)–(4), (6)–(8), and (10)–(14) of the subfamily diagnosis]. Most of these states are plesiomorphic in the Drepanicinae   . The exceptions are some apomorphies of this subfamily, e.g. CuP in the hindwing is absent; the basal crossvein r-m is either upright or at most inclined, but not sinuate; and the prothorax is entirely tubular (but all of these characters are shared by Mantispidae   and Calomantispidae). So, Drepanicinae   might be considered at least as plesiomorphic as Symphrasinae   . 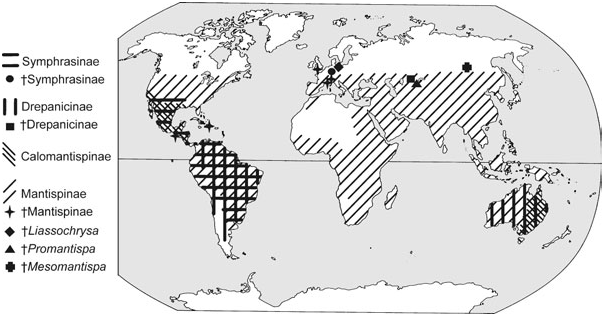