Colonies are about 3 cm high, simple, upright lobes with a short, thick, cylindrical stalk and a conical naked head. The long zooids, characteristic of the genus, open all around the head and extend crowded and parallel to one another down into the base of the stalk. Sand is crowded in the stalk and projects up into the centre of the lower half of the head.

Zooids of species in the genus Eudistoma   are very similar. The zooids all have short thoraces with numerous stigmata, characteristic long oesophageal necks with the stomach and gonads in the pole of the gut loop at the posterior end of the zooid and muscular body wall with an almost continuous outer coat of transverse fibres and inner longitudinal bands that continue into the abdomen. Because of this lack of diversity in the zooids, distinguishing characters are often more likely to be found in the colonies and the larvae.

The form of the small, simple, compact colonies of the present species and the distribution of sand in them is characteristic. The genus is not known from the sub- Antarctic south of New Zealand and the Tasmanian Canyons, and its original provenance may be from the tropics, where it is most diverse. However, the record from Margaret River and its occurrence south of Tasmania suggests that it is a temperate species which extends northwards on each side of the continent.

The colony is soft and translucent, its upper surface expanded into four short conical lobes like a crown. It converges slightly toward the base, where it appears to have been fixed to a wide, flat surface about 4 cm in diameter. Zooids extend up the colony parallel to one another and the independently opening six-lobed apertures are around the outside of the terminal lobes. Thorax and abdomen are, together, relatively short. Three rows, each of about 12 branchial stigmata, are in each half row and a short gut loop with a smooth-walled stomach is about halfway down the short abdomen. The posterior abdomen is very long, with strong bands of muscles along each side. Gonads were not detected in the newly recorded colonies, which appear to be in a vegetative stage, although there is a large embryo in the brood pouch (at the postero-dorsal end of the thorax) in a few of the zooids.

These gelatinous, translucent rose-coloured colonies with a thick, soft stalk consisting of one or more terminal lobes, are characteristic of this wide-ranging apparently indigenous species. The new record is the most southern location known and confirms its wide range, often from temperate localities albeit extending into the tropics on both sides of the continent.

The new records from Tasmania are the most southerly locations yet recorded for this species.

The colonies have the robust, contractile zooids of the usual form entangled in the soft, disintegrating mucus-like test as described previously.

Although colonies and zooids resemble those of the Japanese P. fragile Tokioka, 1958   , the present species broods only a single embryo at a time, while the Japanese species has a long brood pouch with up to five embryos being brooded at a time and a significantly longer larval trunk (see Kott 1992a). Like other species in this genus it is more often recorded from temperate locations than from tropical ones.

The colony is small, sessile, its upper surface divided into two rounded lobes that narrow toward the base, where some sand is embedded, although there is none in the gelatinous and translucent test of the upper part of the colony.

The colonies are as previously described, with the long, narrow, cylindrical sandy stalks arising from a common base and a terminal cylindrical glassy, transparent head with the relatively crowded zooids opening all around it. The sand becomes less crowded toward the top of the stalk and is only sparse in the head. In this species the oesophagus is long and the four-chambered pseudodistomid stomach is in the distal one-third of the relatively long abdomen. The posterior abdomen is long and narrow, about twice to three times the length of the abdomen, with two broad bands of muscles and a short row of gonads at the posterior end (in the base of the stalk).

The colonies are as previously described, soft, grey oval pillows, with sand in the surface, although it is only sparse internally. Common cloacal apertures, slightly orange in the newly recorded specimens, are evenly distributed and protrude slightly from the otherwise smooth surface of the colony. Each cloacal aperture contains the very long, narrow atrial lips of the circle of zooids that surround it. These atrial lips project from the body wall just anterior to the small, round atrial opening of each zooid and they appear to close down over the forward-projecting atrial opening. A small post-atrial papillum also projects from the middorsal line. Zooids have 18 rows of about 14 stigmata per half row, and about the same number of flat, rounded branchial papillae on each of the transverse interstigmatal vessels. Gonads were not detected in the newly recorded colonies, and a long, narrow posterior abdominal vegetative stolon is present.

The specimens are consistent with those described previously for this species. It is distinguished from Poyclinum marsupiale   by its more numerous rows of stigmata, the less protuberant common cloacal apertures and the crowded zooids in complex systems rather than the circular systems of zooids that surround each common cloacal aperture in P. marsupiale   , and when embryos are present, by the lack of a brood pouch projecting from the thorax.

Sandy, more or less circular cushions with rounded margins are fixed to the substratum by most of the under surface, although one specimen ( SAM E2867 View Materials ) has an extension of part of the under surface attached to a bryozoan skeleton that holds the circular plate-like colony aloft, like a mushroom. Elevations, each containing a circle of zooids around a terminal cylindrical common cloacal aperture, project from the upper surface. The test is colourless and brown zooids are visible through it. Sand is only sparse in the internal test. A long narrow atrial lip from the body wall anterior to the small circular atrial aperture of each zooid is inserted into the test around each common cloacal aperture. The atrial lip has a straight or a pointed tip, or it is produced into a fringe of four or five pointed lobes or up to 10 minute denticulations. A small post-atrial papillum projects from the body wall just behind the atrial aperture. About 16 rows of stigmata have about 15 stigmata per half row and about the same number of flat branchial papillae on each transverse vessel. The stomach is small and smooth-walled; the gonads are in a sac constricted off from the abdomen. The proximal part of the vas deferens runs a convoluted course over the surface of the gonads and it may straighten out as the gonads mature. Embryos are crowded in a brood pouch protruding from the thorax behind the atrial cavity in the newly recorded specimens ( SAM E3298 View Materials collected in November)   .

The specimens are consistent with those described previously for this temperate species. It is distinguished from Polyclinum incrustatum   by its brown zooids, presence of a brood pouch constricted off from the thorax, fewer rows of stigmata and cloacal systems that consist of a simple circle of zooids around a protruberant common cloacal aperture. 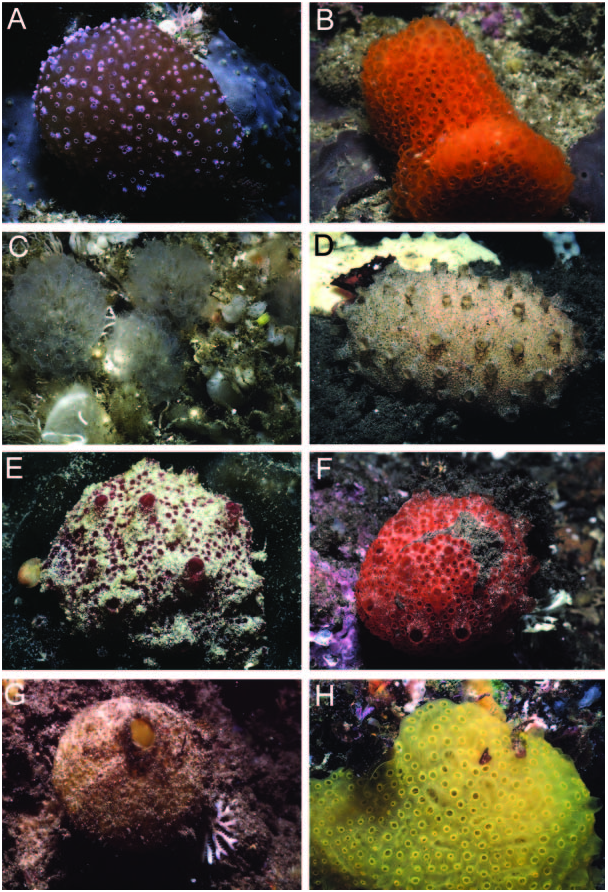