Colour. Dorsally whitish yellowish with some dark blue bands on anterior part of Th II, and almost the whole Th III; dorso–lateral longitudinal stripes on Abd I and II; Abd II with posterior transversal band and a central posterior spot; Abd III with lateral longitudinal stripes, a posterior band and a central spot; Abd IV with a medial transverse irregular band and a narrow band in its posterior edge; Abd V and VI with lateral spots. ( Fig. 3K View FIGURE 3 , 6B View FIGURE 6 ).).

Remarks. Entomobrya varia was described by Schött (1917) as follows: “white colour or yellowish-white; pigmentation blue/black. Morphology generally as in the European forms. Length 1–2 mm. Locations. Various specimens from Glen Lamington and Logan Village, South Queensland, October 1912 also from Atherton, North Queensland, March to May 1913 ”. Remarks from Schött. “All these specimens were included under the collective name of E. varia even though they are not a natural colour series. With further material, perhaps at least two species will be distinguished. This is indicated by u. a. as individuals have different forms of unguiculus, but this character may vary intraspecifically. The material here is too limited to decide on the true status of Schött’s five “ types ”. For instance, two individuals had the same colour pattern but a different form of u nguiculus. Others he distinguished on colour pattern and size, specimens from different localities are included. In type I, the accepted varia here, the spots are apparently not regular; in type II the lateral spots on the third and fourth abdominal segment slope obliquely forward and downward in bands; type III (now aa with type IV) is similar with the lateral patterns similar on thoracic segments; in type IV and partly also in the type V, the rows are posterior. On thoracic segments they are coalesced into longitudinal stripes. Types IV and V are also distinguished on size.

Logan Village was selected as lectotype locality (Greenslade 1974) without giving any justification except that it was the best specimen. It is likely that the specimens from Glen Lamington are the same species as this location is close, at 65 km further north.

Womersley (1939) recorded E. varia from SA at Morialta Gorge, under bark; in WA at Kings Park, on low vegetation; also from Denmark WA on Karri bark, and from TAS, Launceston. Womersley’s (1939) description gives no more information on the species morphology except for that already given by Schött (1917). Womersley’s specimen from Kings Park, Perth, WA (5.ix.31), that Womersley originally described as E. mitchelli , was later determined by him as E. varia but the specimen is overcleared so identification is impossible. However, the unguis is not as is described in its paper as truncate nor is the unguiculus. In material used here to identify E. varia , there were two types of unguiculus, a normal, long one (near 60%) and specimens with a truncate one

Entomobrya varia is well represented in the East, South and Western Australia. In the northeast, another species is present. Specimens with different forms of unguiculus also had a different colour and were from different localities. They have been described as E. additae sp. nov. Entomobrya varia is similar to E. peregrina sp. nov. in some aspects. See remark in description of E. additae sp. nov. to separate these three species. 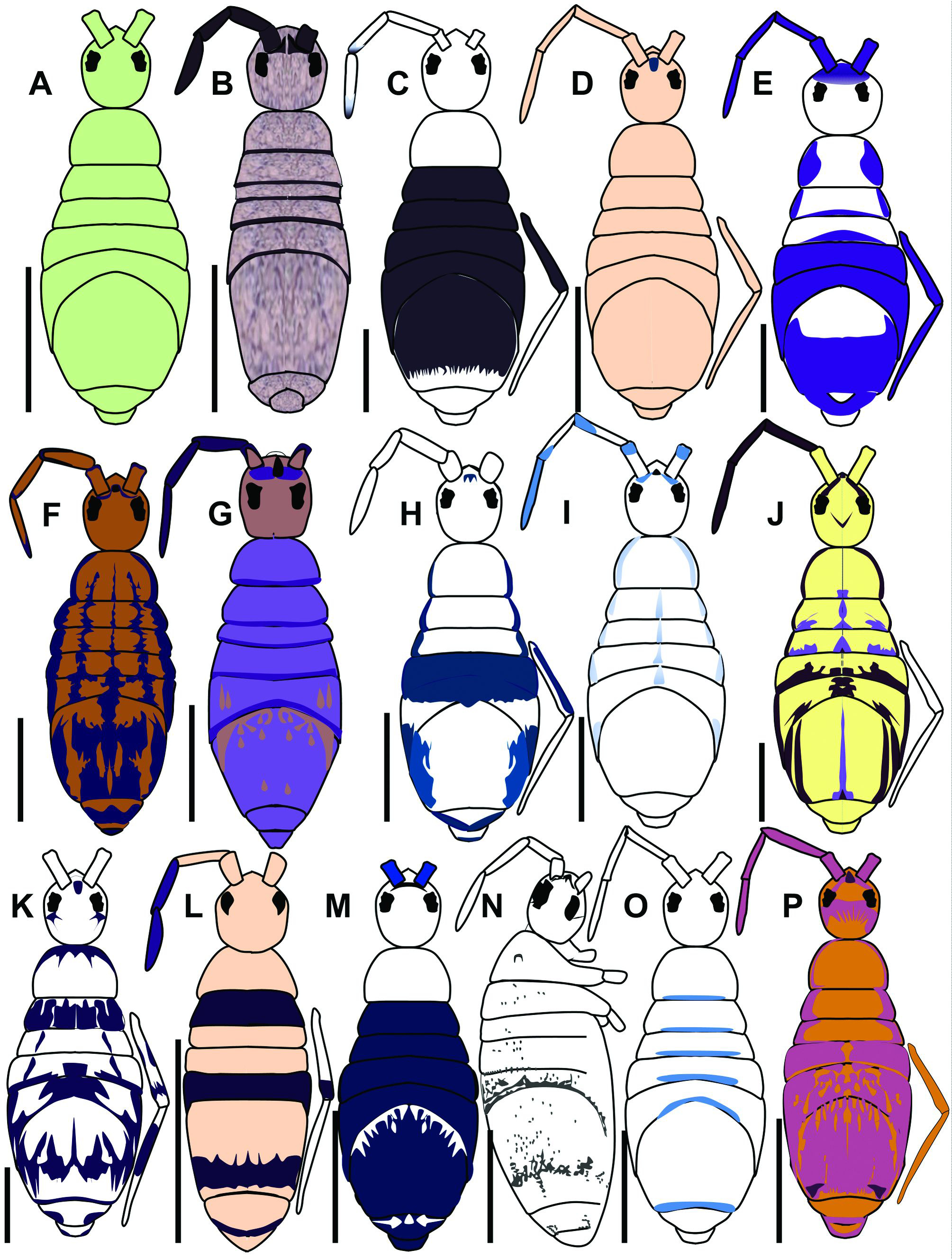 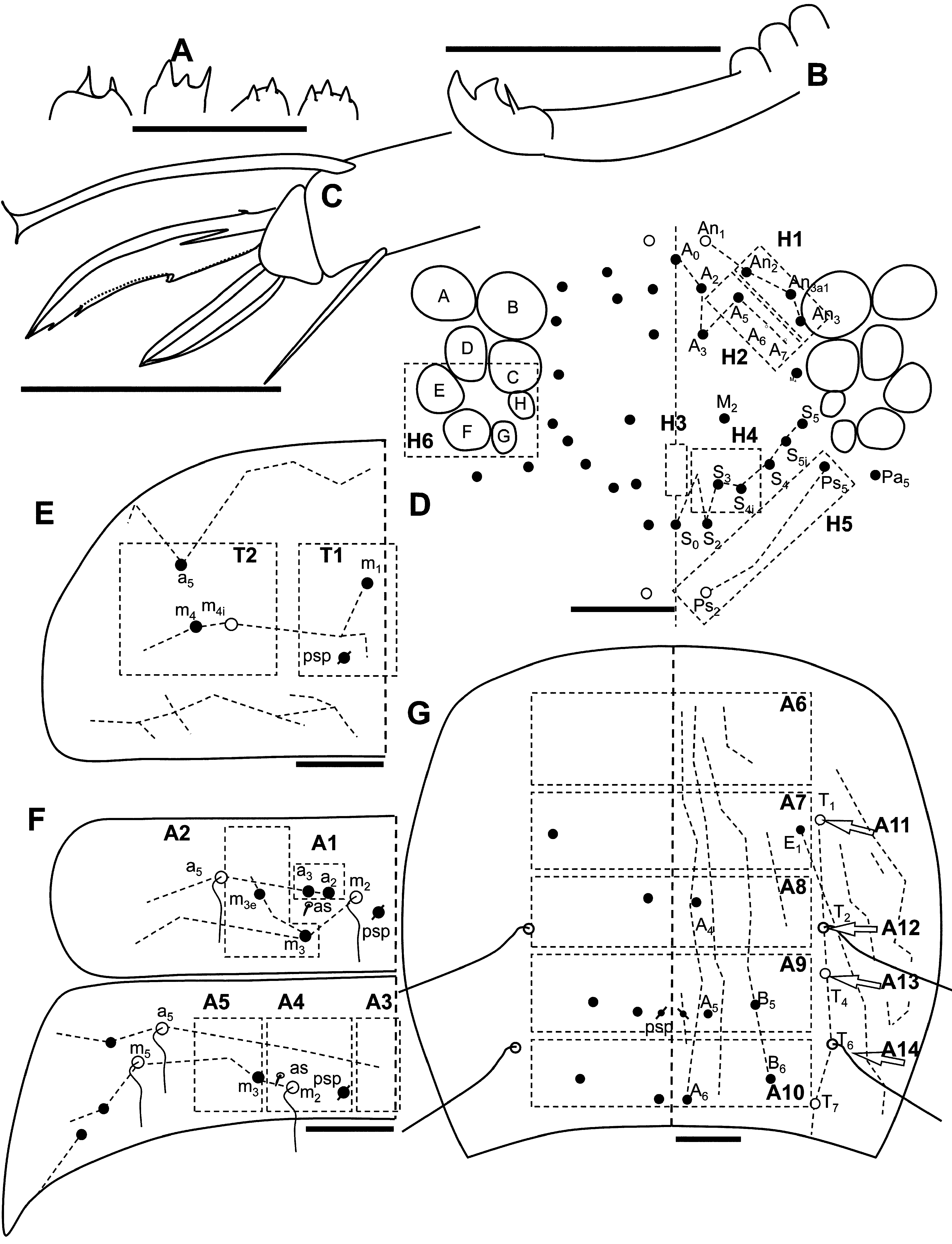