Description. Male alate, body and legs entirely dark brown with testaceous head and black antennae. Body length (from anterior margin of clypeus to apex of elytra): 4.5 mm; antennal length: 3.3–3.5 mm; elytra: 3.0 mm; head and prothorax: 1.5 mm. Head round and completely exposed, as wide as pronotum, slightly rugose with some short hairs. Eyes spherical and strongly protruded, interocular dorsal distance about 1.9–2.0 times longer than eye diameter. Maxillary palpomeres 4-segmented, palpomere III very long and cylindrical and with a few long hairs, palpomere IV securiform with a short lobe at the upper edge; labial palpomeres 3-segmented and with hairs, last palpomere very elongated, globular and slightly pointed at apex. Antennae 11-segmented, covered with a few short and some long hairs, filiform, relatively long, posteriorly reaching about the mid-length of elytra, scape elongated and enlarged, pedicel (antennomere II) short, antennomere III 1.5 times as long as II, IV –XI subequal in length and slightly longer than III. Pronotum with numerous long hairs and without cavities, slightly longer than wide, posteriorly narrowed and sides slightly rounded, with blunt and evident angle near the basal angles, anterior and posterior margins flat and with shallow punctuation, in middle with longitudinal glabrous part, lateral margins strongly granulose and in relief, and with two irregular processes on sides that appear to branch from the beginning of propleurs; the first (frontal) one large at the base and equipped with a long, slender and pointed appendix covered with long hairs, the second (posterior) one without hairs, cylindrical and slender at basal half part and its apical part flattened and wide with the external side winding. Scutellum triangular-shaped with rounded apex. Elytra long, completely covering abdomen, wider than pronotum, narrowed at humeri and widened posteriorly from about the first third to the apex, rounded at apices, whole surface very finely rugose with shallow punctation, and covered with numerous hairs and without traces of costae. Metathoracic wings present and large, clear and with few veins. Metasternum and abdominal segments with dense numerous, fine and short pubescence, penultimate ventrite without incision, last ventrite very narrow compared to the previous one, not elongated, wide and roundish. Legs moderately long and covered with hairs; coxae very long and robust; trochanters squat; femora short and thickened, mesofemora slender compared with pro- and metafemora, tibiae cylindrical and about as long as femora, each with a big spur; tarsi 5-segmented, tarsomere I fine and moderately elongated, II shorter and slightly apically enlarged, III short and triangular shaped, IV strongly bilobed, V elongated and very fine; each leg with inner claw bearing acute and long tooth basally, except for posterior legs with blunt tooth. Female unknown, sexual dimorphism is supposed.

Etymology. Species named after Karen Pankowski of Rockville, Maryland, USA, mother of one of the authors and a true inspiration.

Differential diagnosis. This new genus is monotypic and easily recognizable by the particular structure of the pronotum with two difform processes on its sides and without depressions on the surface, and with lateral margins strongly granulose and slightly in relief. In fact, Autosilis Kazantsev  has only the inner claw with a tooth at the base, glabrous pronotum without distinct pores in rounded cavities in the front half, and relatively short lateral processes, while Silis Charpentier  has mesonotum with pores placed in deep cavities, and lateral processes, reduced in males, shorter than Markus  gen. nov. ( Kazantsev 1994, 1997). The new genus differs from Eusilis  because of the widened fourth tarsal segment (narrowed and not bilobed in Eusilis  ), and from Podosilis  in the presence of an acute tooth in all inner claws of the legs (blunt tooth only in the anterior tarsi and with inner claws cleft at apex in Podosilis  ), and from Asiosilis  because both claws of all tarsi in Asiosilis  males have a broad tooth at the base ( Kazantsev 1994). Furthermore, the new genus differs from the fossil Electrosilis Kazantsev  because Electrosilis  shows an unmodified lateral margin of pronotum with only slightly explanate sides, small roundish pores and small posterior angles ( Kazantsev 2013), while the fossil Curche Alekseev & Kazantsev  has a pronotum with an additional anterior incision and angular process as well as two very large and deep depressions ( Alekseev & Kazantsev 2014).

Remarks. The amber specimen is very clear and transparent. There are some sparse, very small and not deep (superficial) fractures rather far from the inclusion. The inclusion is complete with only the anterior right irregular process, and the tooth of the metathoracic legs not easily visible. 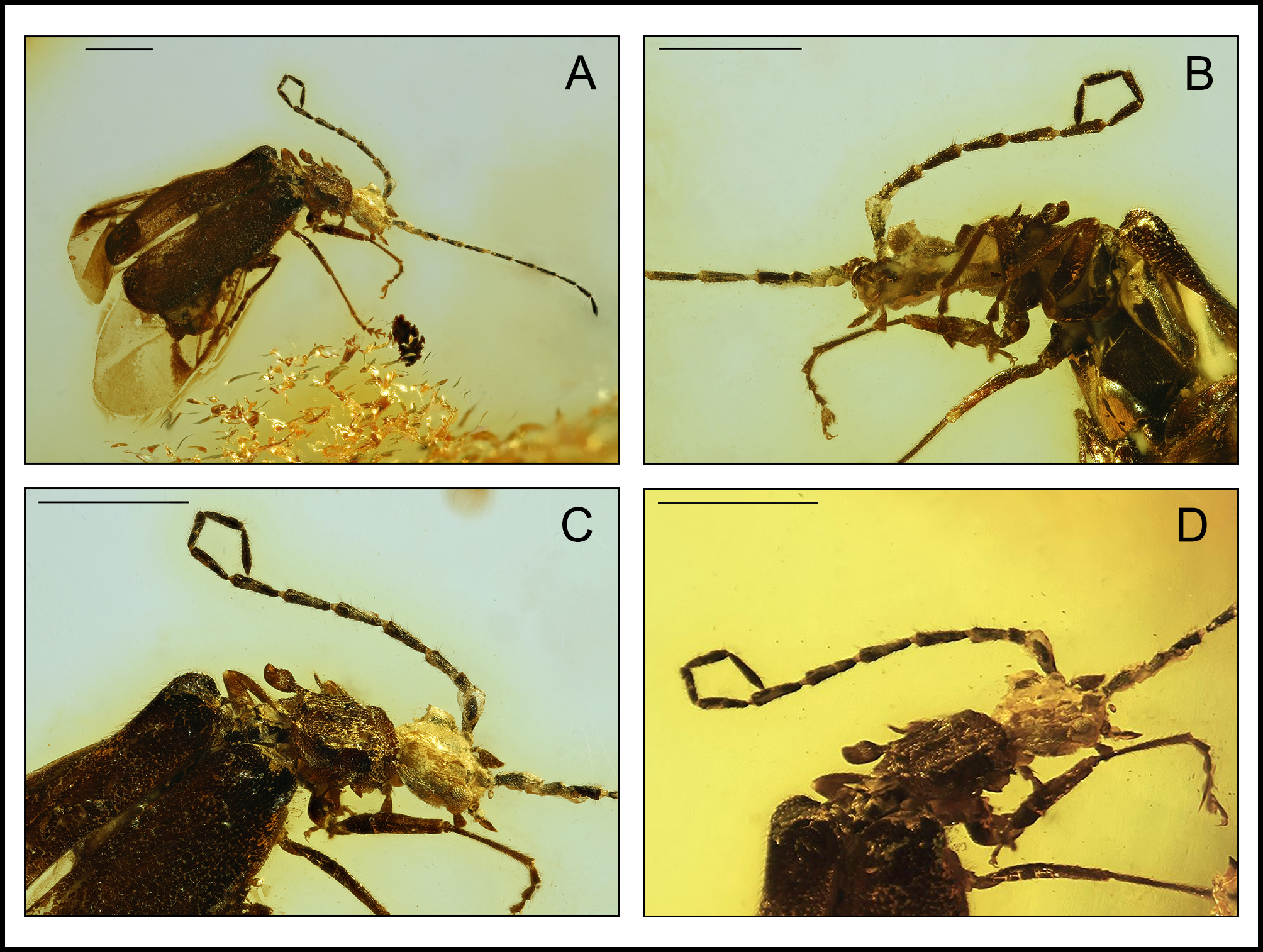