Variation. Komai (2006) indicated that the possession of markedly unequal fourth pereopods was diagnostic for P. patiae  among species of the P. anceps  group. In the present new species, the morphology of the fourth pereopods appears different between males and females. In males, the fourth pereopods are generally similar from the right to the left, whereas in females, they are markedly unequal and dissimilar, of which only the left is provided with a distinct tuft of long setae on the dactylus. Although the sample size is limited, we suggest that this difference may be the result of sexual dimorphism.

Etymology. The specific name is a combination of the Latin, dis (not) and similis (similar), in reference to the different morphology of the fourth pereopods between males and females.

Distribution. Kashiwa-jima Islet in Shikoku and Okinawa Island in the Ryukyu Islands, southern Japan, at depths of 3– 5 m.

Remarks. The new species belongs to the P. anceps  group because of the lack of the setal rows or series on the ventral surface of the ultimate segment of the antennular peduncle ( Komai & Osawa 2006). Pagurixus dissimilis  n. sp. appears closest to P. nanus  in both morphology and coloration in life. The two species have one or two small spines on the proximal half of the dorsal surface of each carpus of the second pereopods. The other species of the P. anceps  group lack such spines on the carpi of the second pereopods. Pagurixus dissimilis  is distinguished from P. nanus  by having a clearly delimited dorsomesial margin on the dactylus of the right cheliped in males and females, a blunt but distinct median crest and small mesial spines on the dorsal surface of the carpus of the male right cheliped, and paired gonopores in females (an unpaired left gonopore is present in P. nanus  ). As mentioned above, the fourth pereopods of females are notably unequal and dissimilar in the new species, whereas they are subequal and similar in P. nanus  . Details of the coloration in life are also different between the two species. Pagurixus dissimilis  has irregular brown blotches or transverse bands on the carpi of the chelipeds, instead of scattered pink spots in P. nanus  .

As well as the new species, the brown-banded color pattern of the ambulatory legs is also seen in P. anceps  and P. patiae  , and therefore, these species can be easily confused without detailed observation on morphological characters. In addition to the possession of one or two subproximal spines on the dorsal surface of each carpus of the second pereopods, the presence of dorsomesial proximal spines on the carpus of the male right cheliped immediately distinguishes P. dissimilis  from the latter two species. The new species further differs from P. anceps  in having an obtuse ventrodistal margin of the carpus of the left third pereopod. In P. anceps  , the ventrodistal margin is distinctly produced. Pagurixus dissimilis  is separated from P. patiae  also by the dactylus of the right cheliped with a clearly delimited dorsomesial margin, the carpus of the male right cheliped with a distinct median crest and a mesial row of small spines on the dorsal surface, the proportionally longer dactyli of the ambulatory legs (0.8 –1.0 of the propodi length in P. dissimilis  versus 0.7–0.8 in P. patiae  ), and the paired gonopores in females (only an unpaired left gonopore is present in P. p a t i a e). Details of the coloration in life are also different between the two species. The transverse bands on the ambulatory legs of P. dissimilis  are usually broader and lighter in color than those of P. p a t i a e. 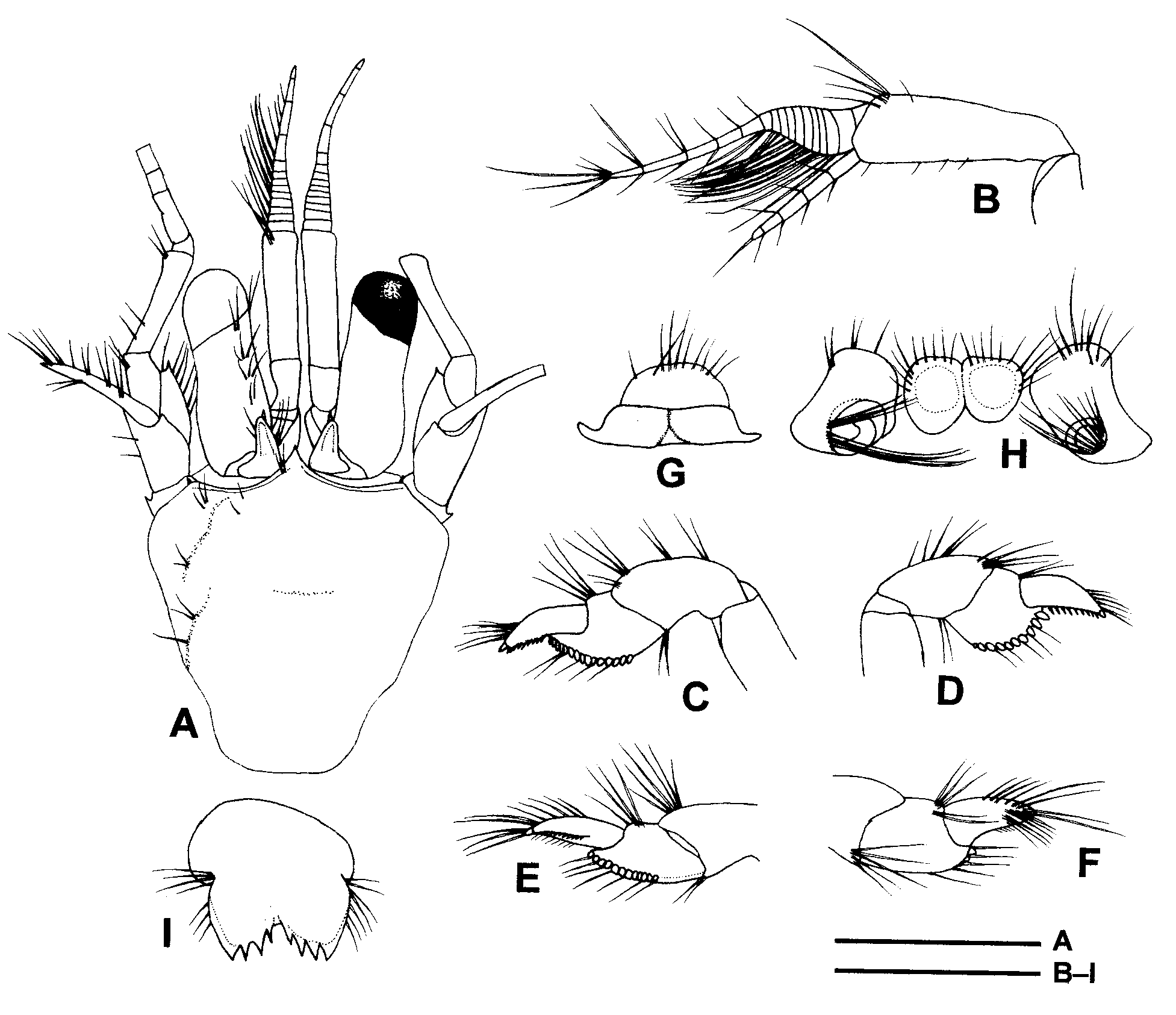 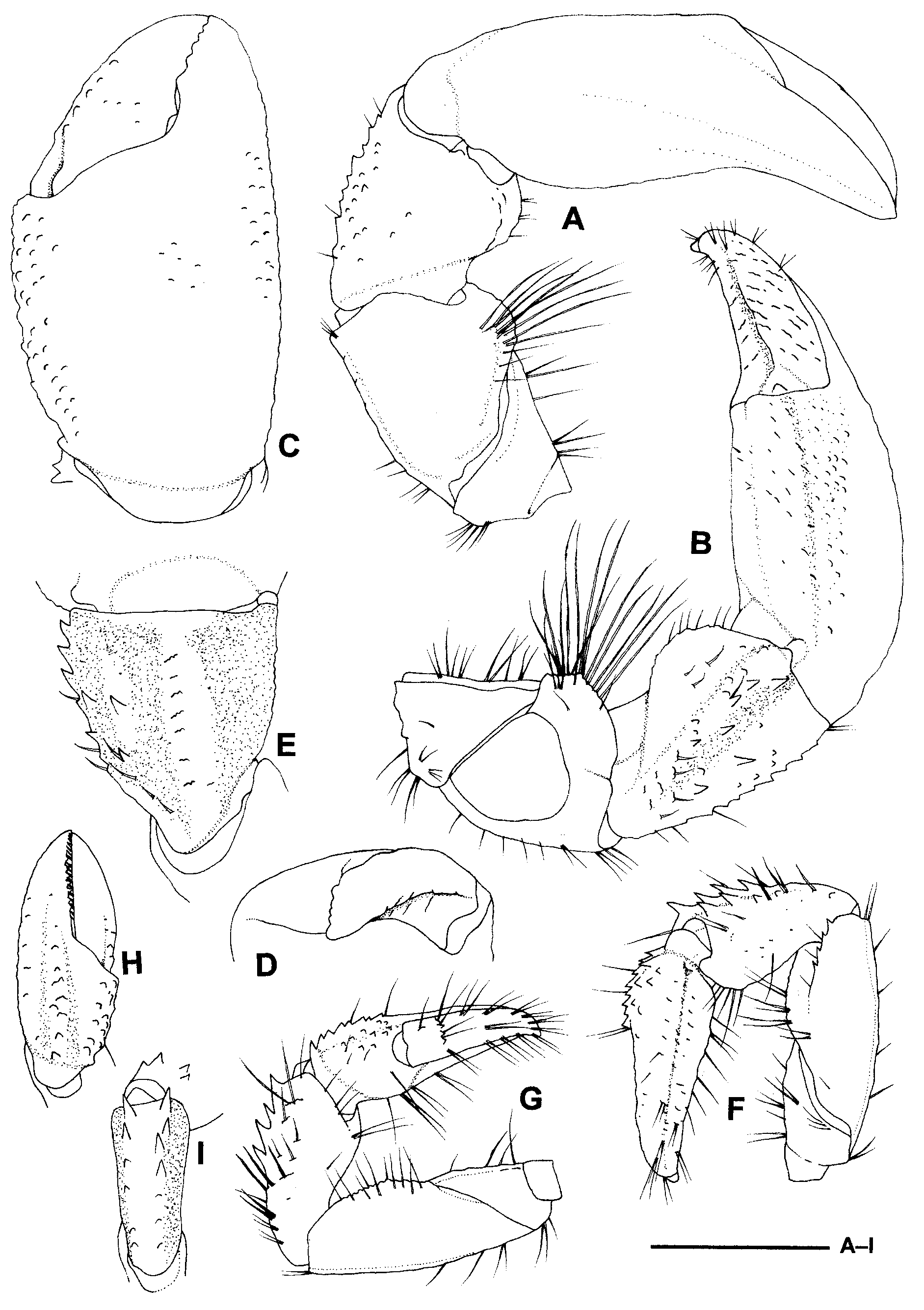 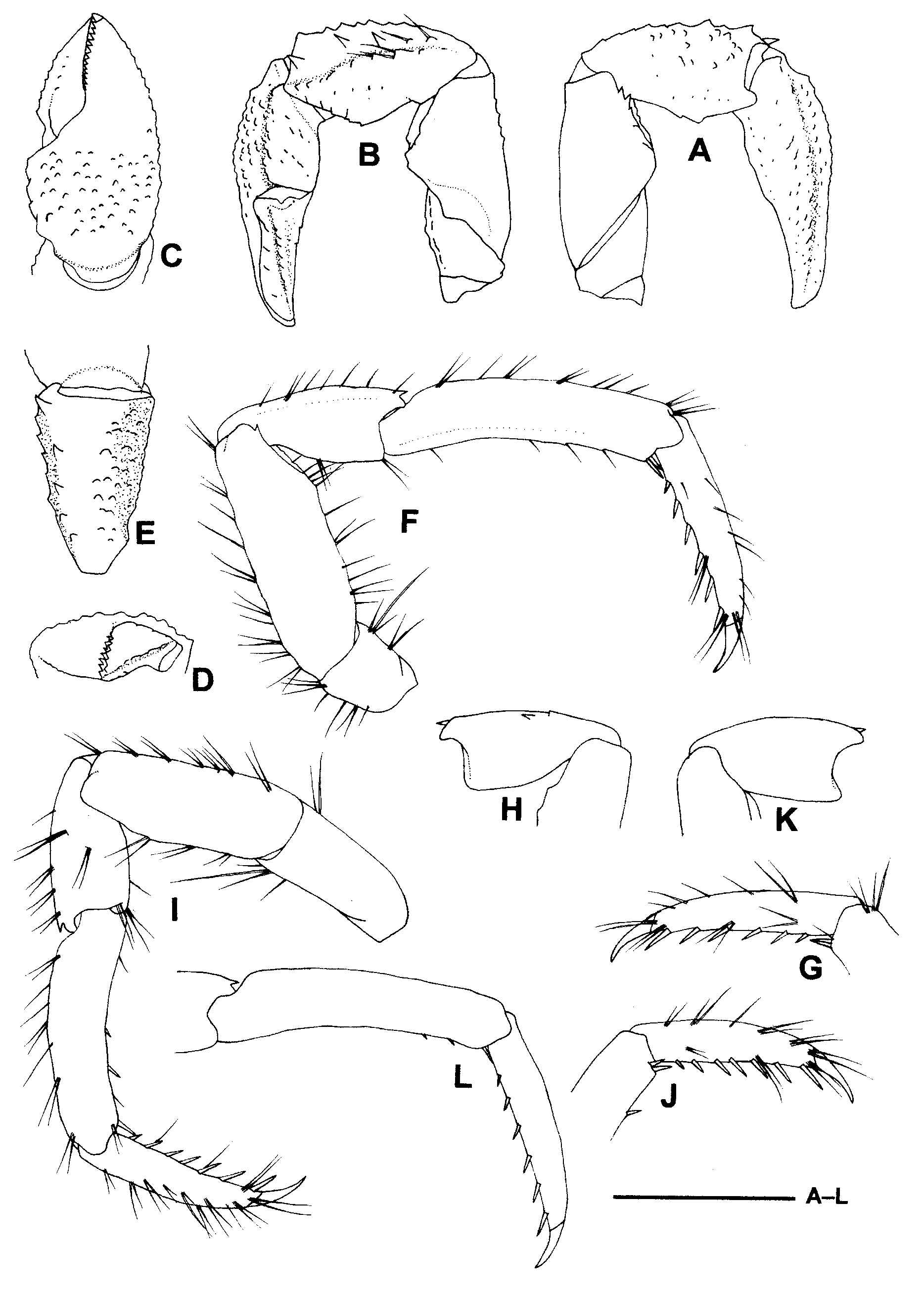 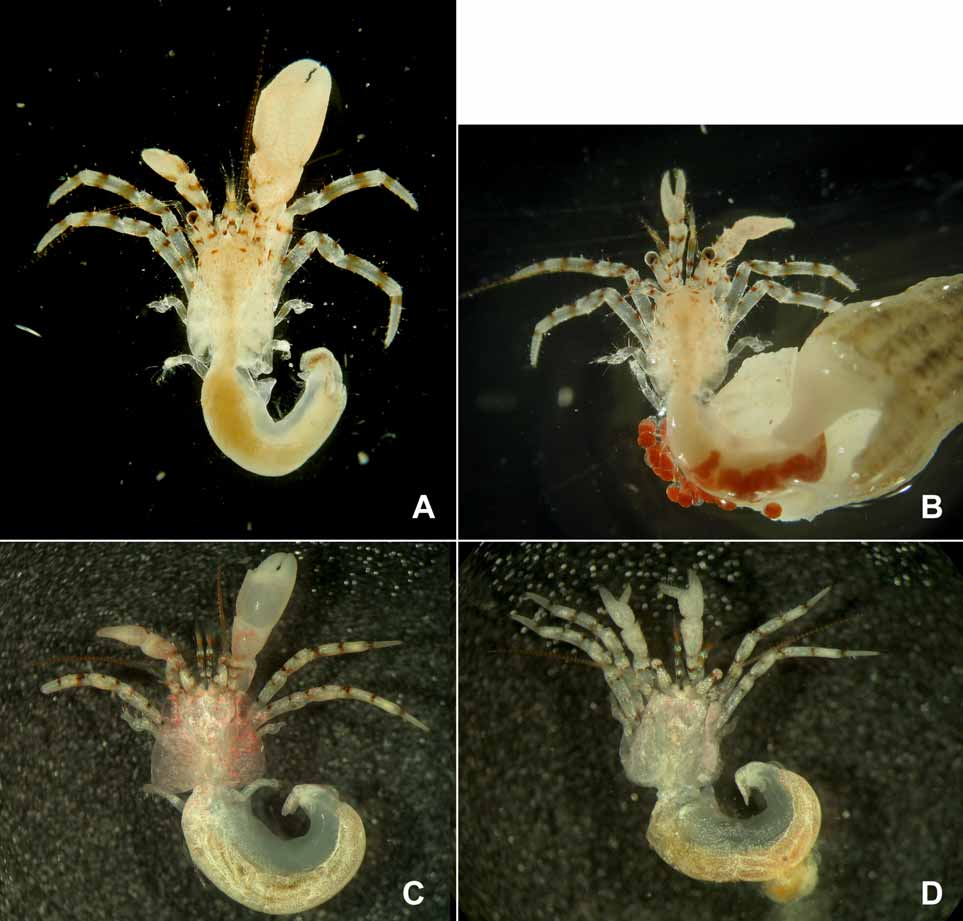