Etymology: From the Latin rectus, -a, -um (rego), meaning straight, with reference to the macroscopic appearance of both stems and branches.

Description: Hydrorhiza missing, but stems above origin from stolon comprising a monosiphonic, ahydrothecate basal part of varied length, with several proximal wrinkles; remainder of stems divided into moderately-long, slightly geniculate internodes by means of oblique constrictions of the perisarc slanting in alternate directions; nodes brownish in older parts of the colony, becoming transparent in younger ones. Branching pattern irregular, with side branches arising every 1-8 stem hydrothecae, immediately below their bases, through short, lateral apophyses; branching repeated several times, introducing a slight torsion in lower-order branches so as to accommodate the newly-formed ones, giving the colony a somewhat three-dimensional appearance, though it is rather compressed antero-posteriorly. Stems and branches of similar structure, except for the first internodes of the latter, which are comparatively longer than the subsequent ones, and provided with a couple of basal wrinkles. Hydrothecae placed distally on internodes, biseriate, alternate, adnate for about 1/3rd their adaxial length; free adaxial wall conspicuously swollen basally, decidedly convex, becoming concave towards aperture; abaxial wall straight or nearly so basally, becoming convex distally, where it forms a neck region, widening towards aperture; the latter tilted outwards and upwards, provided with 4 pointed, triangular cusps separated by deep, rounded embayments; no submarginal, intrathecal cusps. Gonothecae borne on stems and side branches, arising from below bases of hydrothecae; broadly ovoid, walls transversely wrinkled, wrinkles more obvious distally, becoming obsolete proximally; aperture surrounded by 3-4 pointed perisarc projections.

Remarks: The material from the Falkland Is. assigned by Allman (1888) to S. polyzonias ( Linnaeus, 1758)  shows striking resemblances to the present species, and is thought to be conspecific (N.B.: Allman’s specimen could not be examined, as it is apparently no longer extant in the collection of NHML; A. Cabrinovic, pers. comm.).

In addition, the reexamination of El Beshbeeshy’s (2011) sample ZMH C11895, assigned to the Linnean taxon, revealed that it belongs to the new species described herein. Among the material described by El Beshbeeshy, some colonies are reportedly said to reach as much as 19 cm high, their stems remaining always monosiphonic. 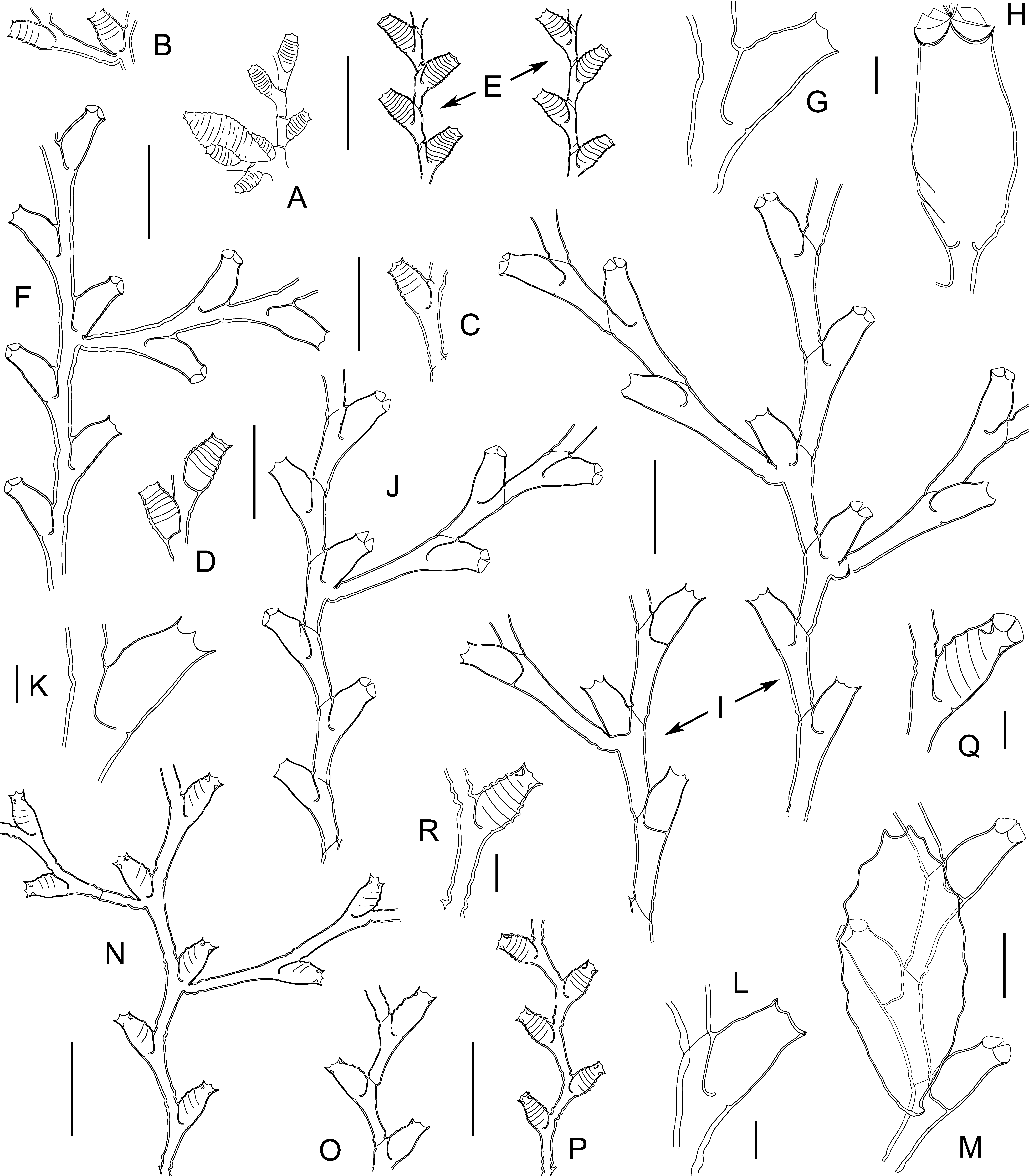