Description: Colonies erect, bushy, up to 6 cm high in inspected material (but up to 8 cm in the type), arising from dense mat of branching, intertwined stolonal fibers. Stems and basal parts of side branches either monosiphonic or fascicled in older colonies; divided into regular, slightly geniculate, rather short internodes by means of oblique constrictions of the perisarc; each internode with a couple of proximal twists, a distal swelling, and a hydrotheca, or a hydrotheca and a short, lateral apophysis below its base, confined to its distal part; branching pattern more or less regular, with generally every two consecutive apophysisbearing internodes separated by a couple of internodes not supporting side branches; occasionally, only one apophysis-bearing internode is given off, instead of two consecutive ones, or successive apophysisbearing internodes or couples of them are separated by 1 or 3 (instead of 2) internodes devoid of apophyses ( Fig. 7AView Fig. 7). Branching pattern of side branches similar to that of stem, though more irregular, with much spaced successive branchlets; proximal most internode generally slightly longer than subsequent ones, and provided with 2-3 spiral twists basally; branching up to at least 6th order. Basalmost side branches generally longer, hence more developed, than uppermost ones. Branches and hydrothecae shifted on to one side of the stem and forming an angle of less than 90°. Hydrothecae flask-shaped, distinctly swollen adaxially, adnate for about 1/3rd or less to corresponding internode; abaxial wall slightly concave to nearly straight for most of its length; free adaxial wall sigmoid, convex in middle; hydrotheca expanding below rim on both ab- and adaxial sides; rim thickened, provided with 4 triangular cusps, of which the abaxial one is distinctly produced, and the laterals asymmetrical; three internal, submarginal cusps (2 latero-adaxial and 1 abaxial) of varied development, sometimes absent. Gonothecae arising from below the hydrothecal bases; male similar to female; broadly ovoid, tapering below, transversely wrinkled, distally with 4 short spines. The perisarc of the colony may be either thin or thick.

Remarks: Although quite succinct, the description of Sertularella contorta  given by Kirchenpauer (1884) does not allow an indisputable identification to be made in the absence of a reexamination of the type material (N.B.: this material could not be found in ZMB, where Kirchenpauer’s “herbarium” was recently located; C. Lüter, pers. comm.). Some statements provided in the original account proved inaccurate, as for example the lack of unilateral arrangement of the hydrothecae, which was subsequently disputed by Hartlaub (1901). The latter author reexamined the (then extant) cotype material, and provided more accurate details on its morphology, allowing a somehow easier identification of this species. The materials NMSZ 1921.143.1351.C&D assigned to S. contorta  by Rees & Thursfield (1965), and reexamined here, agree with the available data on this species.

Sertularella contorta  comes close to S. gaudichaudi ( Lamouroux, 1824)  through the shape (but not the size) of its internodes, and both the shape and size of its hydrothecae. Indeed, the length of the internodes in the later varies considerably (from short to exceedingly long), while it is uniformly short in the present species (this feature results also from Kirchenpauer’s pl. 15 fig. 2). In addition, the mode of branching of S. contorta  recalls that met with in S. allmani  (with stem internodes devoid of lateral apophyses intercalating among those bearing these structures), while S. gaudichaudi  exhibits a much denser branching pattern (with almost every stem internode bearing an apophysis supporting a branch). However, these differences should, perhaps, not be regarded as purely species-specific, especially given that a quite limited number of samples corresponding to both nominal species have been examined in the frame of the present study. Future collecting and molecular analyses are expected to clarify their relationships.

The Chilean material collected by Philippi and assigned by Hartlaub (1901) to the present species, although quite similar morphologically, should be better assigned to S. gaudichaudi ( Lamouroux, 1824)  owing to the presence of long stem internodes among the otherwise short ones (see remarks under the latter species). 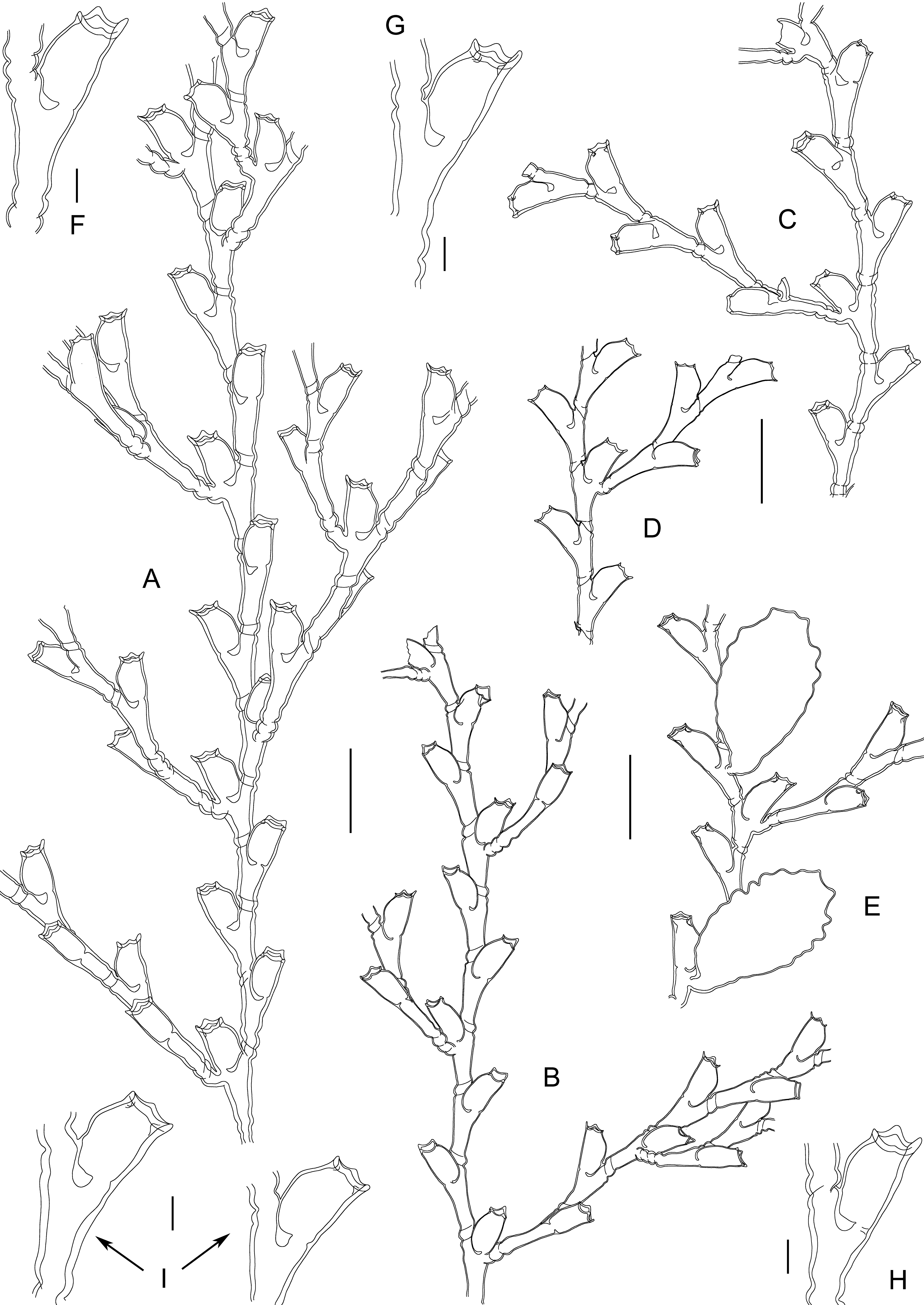 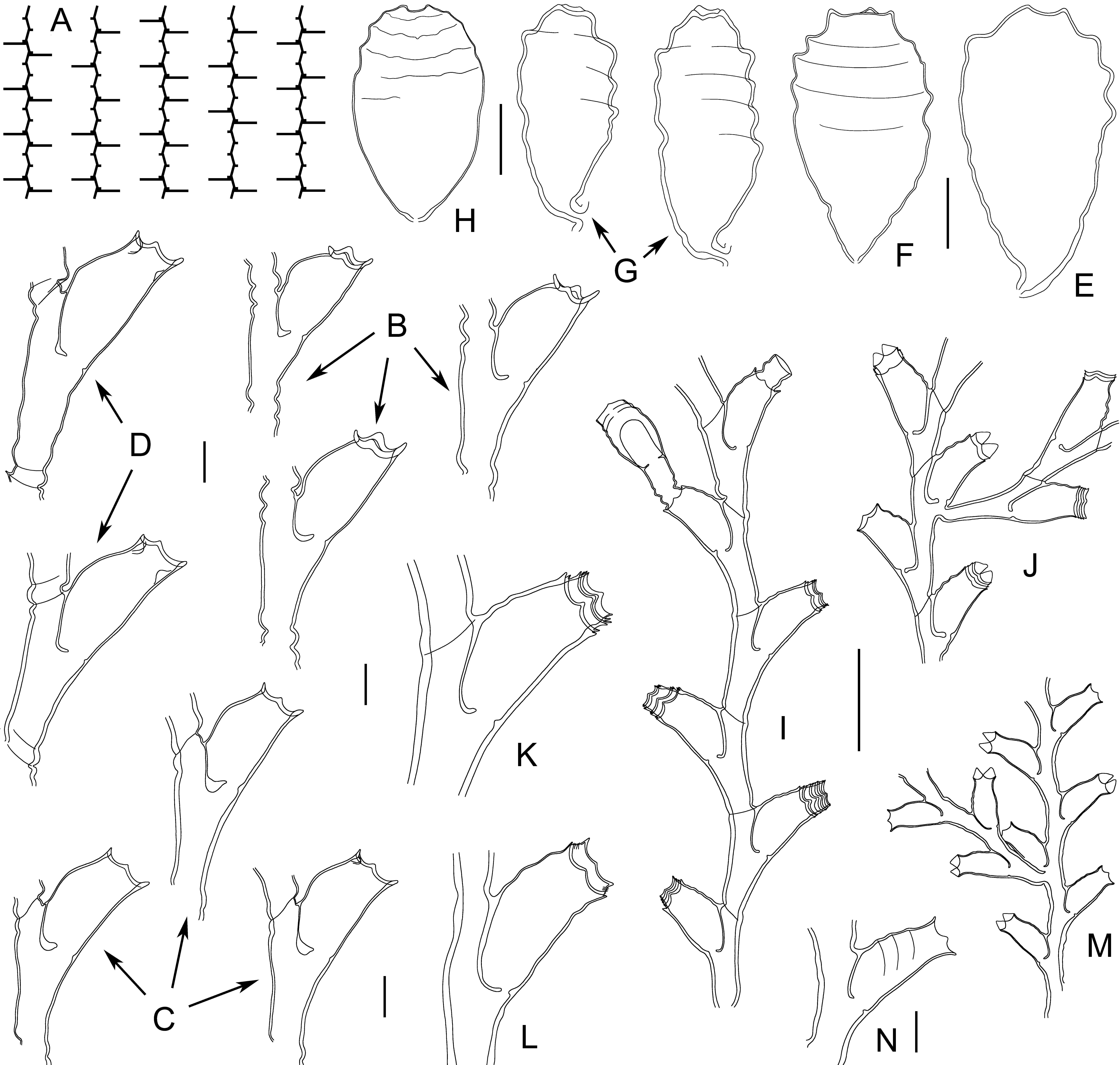