Biology. Although males of L. relictus have been collected as far back as 1956 – remaining unidentified for over half a century – workers were only recently discovered in 2013 from nest samples of Cornitermes silvestrii Emerson and in 2012 from epigaeic and arboreal pitfall traps in typical cerrado (Brazilian savannah) habitat. It is unknown whether workers are nocturnal or diurnal, but hypothetical nocturnal habits and/or their Camponotus -like habitus may account for the low encounter rate of this species. It is interesting to note that at least three of the specimens were captured in arboreal pitfall traps, suggesting that workers may forage both on the soil and in the vegetation strata. The collection of workers ( Fig. 1 View Fig. 1 A, E) and brood (Figure S 1) inside termitaria suggests that L. relictus may live in association with Cornitermes silvestrii . One termite nest measuring 1.30 m wide and about 40–50 cm tall inhabited by L. relictus was found in northeast Goiás state under a tree, and was also occupied by another ant species, Camponotus blandus (Smith, F.) , which is known to be a facultative termite inquiline ( Gallego-Ropero & Feitosa, 2014). The other termite nest with L. relictus specimens was found in southeast Tocantins state, along a trail edge. Unfortunately, no data are available on how the Leptomyrmex occupy the termitaria or if they were sharing galleries with the termites. A potential association with C. silvestrii is compelling as the termitaria of C. silvestrii are large, environmentally-stable clay mounds and may house several other ant and termite species (see Appendix S 2). In addition to describing and comparing the sociometric and sociogenic patterns ( Tschinkel, 1991, 2011) of L. relictus with the Australian species, future studies should test the association of the species with C. silvestrii .

Phylogeny. Phylogenetic analyses of the 10 -gene dolichoderine data matrix yielded results congruent with those of Ward et al. (2010) ( Fig. 4 View Fig. 4 ). In particular, we consistently recovered all four dolichoderine tribes, with Tapinomini as sister to all other Dolichoderinae . Leptomyrmex relictus is positioned as sister to the six Australian Leptomyrmex with strong support: Bayesian posterior probability (PP) of 0.96, and ML bootstrap support ( MLBS) of 93 %. There is maximum support (PP 1.00, MLBS 100 %) for the Australian Leptomyrmex and for the micro- and macro- clades within it. Our results differ from those of Lucky (2011) for the internal topology of Leptomyrmex in that, with our sampling, L. unicolor is sister to L. erythrocephalus , rather than L. geniculatus + L. rufithorax . A sister-group relationship between Leptomyrmex and the ( Forelius Emery + Dorymyrmex Mayr ) clade is also sustained (PP 1.00, MLBS 74 %). Finally this larger clade of ( Leptomyrmex + ( Forelius + Dorymyrmex )) is sister to all other Leptomyrmecini , as in Ward et al. (2010). Notably, L. relictus is a long-branched taxon; because its divergence from the most recent common ancestor of the crown Leptomyrmex , it is apparent that L. relictus has undergone considerable morphological (especially genitalic) and molecular evolution.

Divergence dating. Two alternate analyses were run treating † Chronomyrmex as a stem dolichoderine, reflecting uncertainty of stem or crown placement of † L. neotropicus with respect to extant Leptomyrmex . Dating results obtained were robust to alternate placements of † L. neotropicus . The chronogram from the stem Leptomyrmex treatment is presented in Fig. 5 View Fig. 5 . Mean ages between the two treatments for the clades listed in Table S 3 differed by an average of 0.21 Ma, and 95 % highest probability densities (hpd) differed by an average of 0.26 Ma at the older and 0.53 Ma at the younger ends, respectively. These findings are in accord with results of Ward et al. (2010) and Lucky (2011) (Table S 3), although less so with the latter which incorporated fewer outgroups and loci. Only the dolichoderomorph crown age differed notably from Ward et al. (2010), being 11 Ma younger. This difference is attributable to the modified dolichoderomorph root node calibration used herein which is a diffuse normal distribution, not restricting the minimum age of the node to 100 Ma with the unplaceable yet putative aneuretine fossil † Burmomyrma .

Biogeographical history. The LAGRANGE analysis was run with a single outgroup taxon ( Aneuretus simoni Emery ) ( Fig. 5 View Fig. 5 ), and all results are presented in Table S 4. A Neotropical origin was recovered with high support (relative probabilities> 0.80) for the Leptomyrmecini , the Leptomyrmex + ( Dorymyrmex + Forelius ) clade and Leptomyrmex ( Fig. 5 View Fig. 5 A). The crown ages of Leptomyrmex and the Australasian clade are estimated to be 46 Ma (95 % hpd 53 – 37 Ma) and 28 Ma (95 % hpd 40 to 18 Ma), respectively (Table S 3, calibration 2). We therefore infer dispersal to Australia between those two time periods. This range expansion probably happened before the breakup of the Antarctic land bridge, estimated to have occurred about 35 Ma for Australia and Antarctica, and about 30 to 28 Ma for Antarctica and South America ( Lawver et al., 1992; Sanmartín & Ronquist, 2004). Another notable result is an inferred Neotropical origin for the Dolichoderini (comprising solely Dolichoderus Lund ) ( Fig. 5 View Fig. 5 A). Only four nodes had relative probabilities <0.33 for inferred ancestral ranges: the crown and root Dolichoderinae , the BDL ( Bothriomyrmecini + Dolichoderini + Leptomyrmecini ) clade, and the Bothriomyrmecini . All other relative probabilities were> 0.66, except the Liometopum + Aptinoma Fisher + Tapinoma Foerster clade, which had a relative probability between 0.33 and 0.66. Further sampling within the Bothriomyrmecini is expected to increase the relative probabilities of inferred ancestral ranges for the tribe as well as the BDL clade.

Results and evaluation of fossil record. Dlussky et al. (2014) claimed that † Usomyrma , † Leptomyrmula and Leptomyrmex form a natural group based on the putatively synapomorphic ‘reduction of the central vein sections and cells.’ This is refuted by the retention of complete wing venation in the species of micro- Leptomyrmex , which is nested well within the genus. Moreover, the venation reduction patterns of † Usomyrma , Dorymyrmex + Forelius and Leptomyrmex are not homologous. † Usomyrma has lost Rs + M and Mf 2-3; the former is autapomorphic and the latter has occurred at least five times in the Dolichoderinae ( Fig. 5 View Fig. 5 ). At least two reductions have occurred in Leptomyrmex ( Fig. 5 View Fig. 5 ) as the micro- clade retains complete wing venation, whereas L. relictus , the macro- Leptomyrmex and † L. neotropicus have differing reduction patterns. Leptomyrmex relictus has lost 1 m-cu and Mf 2-3, † L. neotropicus has lost Rsf 2 +, Mf 2 + m, 2 rs-m, 1 m-cu and 2 r-rs, whereas macro- Leptomyrmex have lost Mf 2 -3, 2r-rs (variable) and 1 m-cu, and retained Rs + M, Rsf 2 + and Mf 4 +. Other characters claimed by Dlussky et al. (2014) to support a relationship between † Usomyrma and † Leptomyrmex are, by their explicit statement, either plesiomorphic or autapomorphic; these are thus uninformative of relationships by definition. Furthermore, based on examination of a paratype male, † Usomyrma lacks a newly discovered genitalic synapomorphy of the Leptomyrmecini : a dorsal sclerotic bridge between the penisvalvar bases. The sclerotic bridge is anteroposteriorly broad and fused with the basimeres in L. relictus ( Fig. 2 View Fig. 2 C, F), and is narrowed anteroposteriorly in the Australasian clade. The strap- or thread-like condition of the bridge in the Australasian clade is a synapomorphy, whereas fusion of the bridge to the basimeres in L. relictus is autapomorphic.

Regarding † Leptomyrmula specifically, the only known specimen may be lost (G.M. Bargossi, University of Bologna, Italy, personal communication), but it has fortunately been illustrated ( Emery, 1891) (reproduced in Fig. 5 View Fig. 5 H). The pattern of vein abscissa loss is most similar between † Leptomyrmula and the macro- clade ( Fig. 5 View Fig. 5 F), with the venation being clearly different from the micro- Leptomyrmex ( Fig. 5 View Fig. 5 A) and L. relictus ( Fig. 5 View Fig. 5 E), which have complete or relatively complete wing venation, respectively. Homology of the loss pattern between † Leptomyrmula and the macro- Leptomyrmex is unlikely, however, given the distinctions of the venational patterns. Forewing characters of † Leptomyrmula differ as follows from the macro- Leptomyrmex clade: costal cell broad and short (vs. absent, with secondary sclerotization); free R lacking along the anterior wing margin (vs. continuing almost to wing apex); pterostigmal appendage absent (vs. present); 2 rs-m + Mf 4 + absent (vs. usually present); basal cell narrow and Mf 1 subparallel to Sc + R + Rs (vs. broad, Mf 1 and Sc + R + Rs clearly converging); free Cu short and diverging from M + Cu in the basal third of the wing (vs. about midlength); and anal vein elongated after crossvein cu-a (vs. anal vein strongly reduced or absent). Moreover, the somatic morphology of † Leptomyrmula is considerably divergent, including the following differences: head capsule dorsoventrally compressed; compound eyes small and anteriorly-situated; mandibles small; flagellomeres short; pronotum dorsoventrally tall; mesonotum flat; and limbs short (metatibia not exceeding metasomal apex). Neither † Leptomyrmula nor † Usomyrma have the key macro- Leptomyrmex clade forewing synapomorphies of the pterostigmal appendage ( Lucky & Ward, 2010) and the absent costal vein with secondary sclerotization. We therefore consider † Leptomyrmula and † Usomyrma incertae sedis in the Dolichoderinae . The placement of † Leptomyrmula in the Dolichoderinae itself could be questioned because the genitalia, as illustrated in Emery (1891), do not conclusively demonstrate a synapomorphic condition of dolichoderine genitalia: enlarged basimere and reduced telomere ( Yoshimura & Fisher, 2011; Boudinot, 2015).

Study of worker and male † L. neotropicus specimens revealed presence of the hypostomal notch, a synapomorphy of the genus almost completely unique in the Dolichoderinae , except for the enigmatic leptomyrmecine Anillidris Santschi (B.E. Boudinot, personal observation), confirming placement of the fossil within the genus. Presence of the notch could not be evaluated in either † Leptomyrmula or † Usomyrma ; the ventral head surface of the paratype † Usomyrma examined is obscured by a fracture within the amber. It is plausible that † L. neotropicus is more closely related to L. relictus than to the Australasian clade based on genitalic characters, although the placement of the Dominican amber fossil should be tested in a ‘total-evidence’ framework ( Ronquist et al., 2012 b). 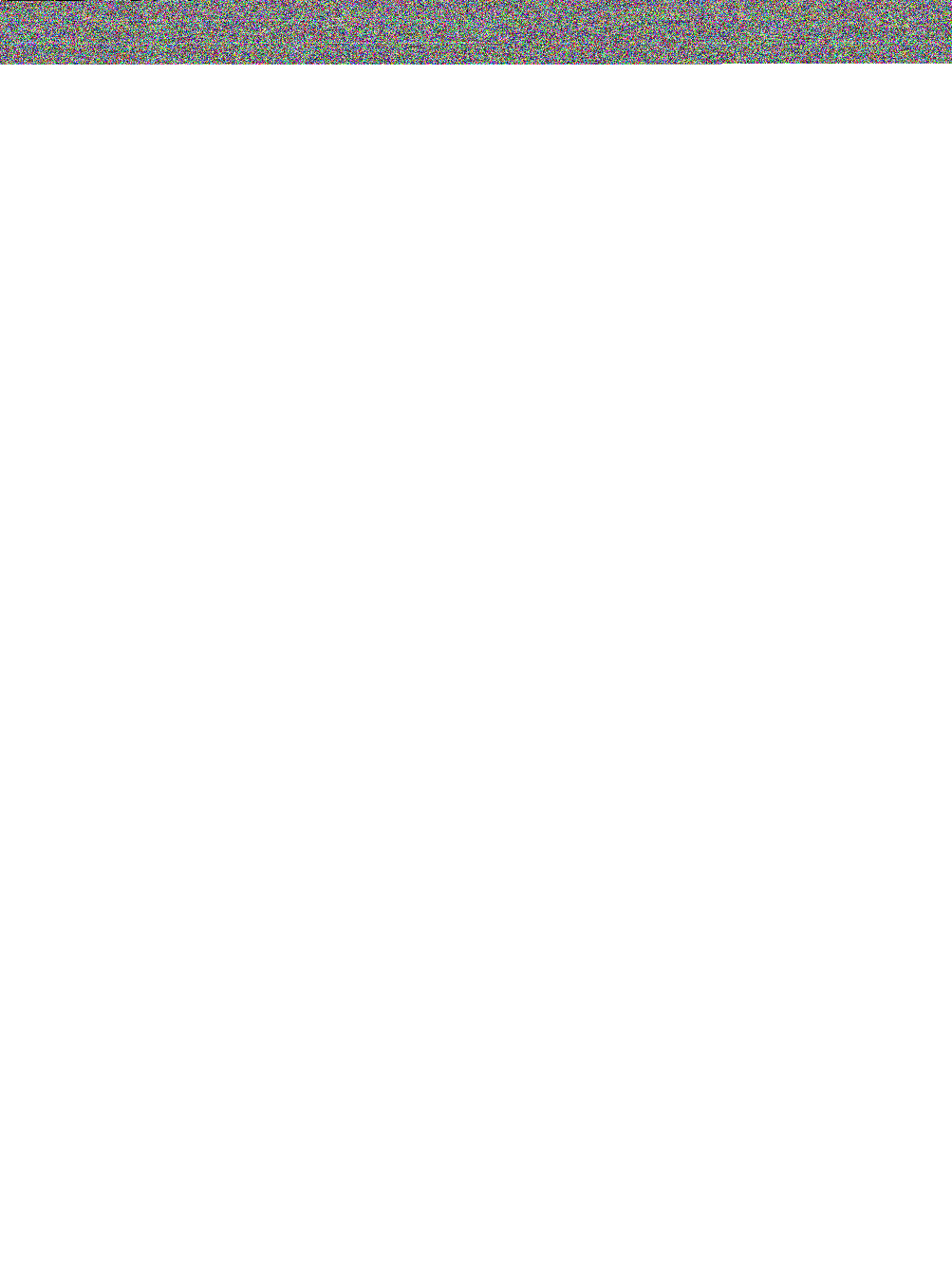 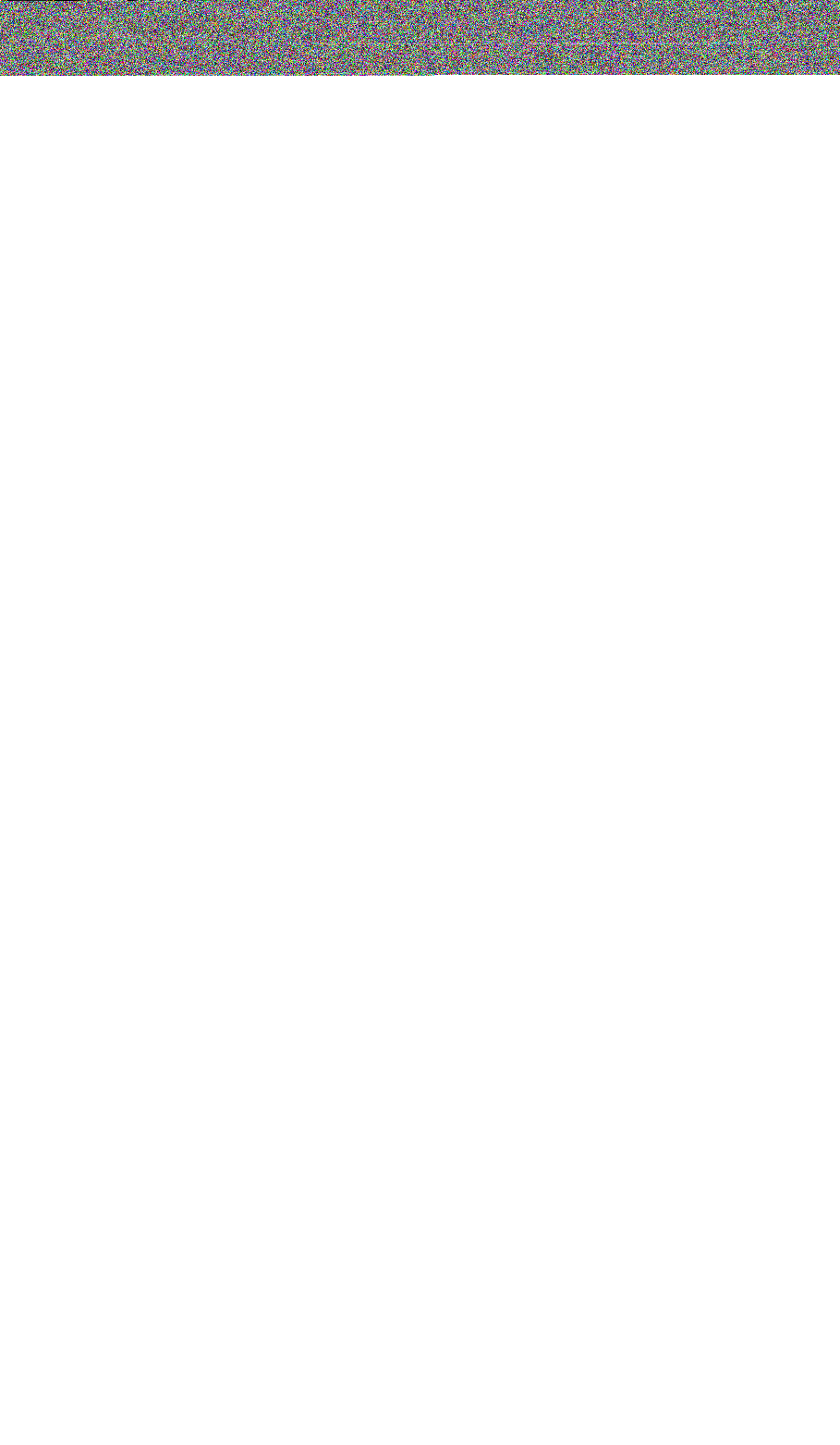 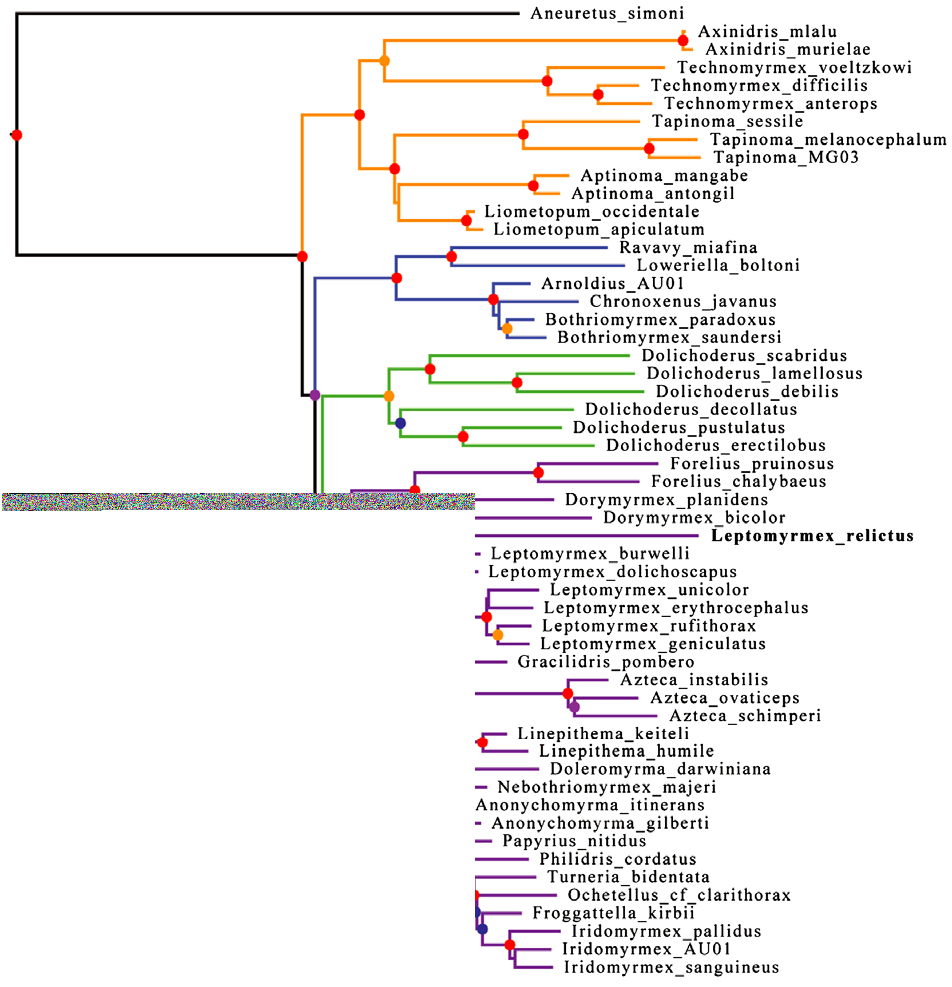 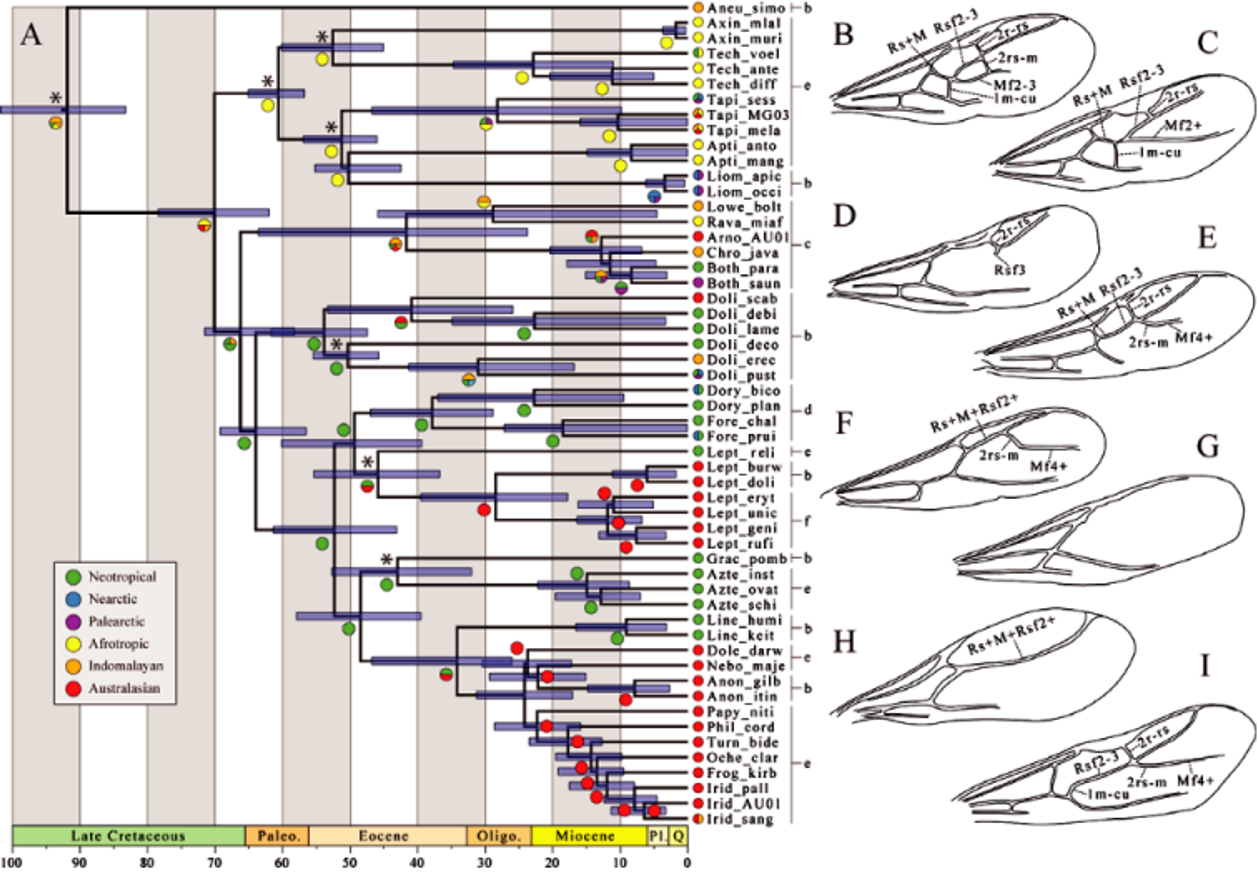