There are no junior synonyms available that could be assigned to the new species from the subgenus Laurentomantis .

The specific epithet marokoroko is a Malagasy word meaning “rugose” or “rugged”. The name was chosen to describe the rugose skin texture of this species. The name is to be treated as an invariable noun in apposition.

Gephyromantis marokoroko (Fig. 2 View Figure 2 ) is a member of the family Mantellidae , subfamily Mantellinae , as diagnosed by Glaw and Vences (2006). The new species can be diagnosed to the genus Gephyromantis morphologically through its granular dorsum, moderately enlarged fingertips, absence of foot webbing, bifid tongue and small femoral glands present only in males as a small number of large granules (type 2; Glaw et al. 2000). Within Gephyromantis , the new species can be diagnosed to the subgenus Laurentomantis through its irregular and rough granular dorsum, single subgular vocal sac in males, completely connected lateral metatarsalia, inner and outer metatarsal tubercle present and tympanum is the same size in male and female.

Gephyromantis marokoroko is characterised by bright red eyes, prominent ridge elements on dorsum, life colouration with a dark brown ground colour with mottled red and grey, hind-limbs dark brown containing red crossbands, absence of red colouration on the sides of thighs and ventre, white spots on grey-coloured ventre and males with bulbous type 2 femoral glands with eight granules in two rows of four on each thigh. Furthermore, the new species is characterised by an advertisement call with a moderately long call duration (1095-1431 ms), 22-28 notes/call, 2-4 strong amplitude-modulated pulses per note and a dominant frequency of 2250-2812 Hz. Finally, Gephyromantis marokoroko has a large genetic distance of 6% or greater amongst related species in the 16S rRNA marker and has strongly supported reciprocal monophyly to all other species in Laurentomantis (Fig. 3 View Figure 3 ).

Bioacoustically, the advertisement call of Gephyromantis marokoroko is similar to other species in Laurentomantis and can be distinguished from all other species in this subgenus through the following combination of continuous call characters: (1) moderately long call duration (1095-1431 ms); (2) 2-4 strongly amplitude-modulated pulses per note; and (3) a note repetition rate of 14-20 notes/s. Gephyromantis striatus , G. malagasius and G. horridus have overlapping call durations with the new species and overlapping note repetition rates, except for G. striatus , which has the fastest note repetition rate (Table 1 View Table 1 ). Despite these similarities, the clearly pulsed notes alone distinguish the new species from all other Laurentomantis , except G. ventrimaculatus ( Angel 1935), which has ca. 5-6 pulses/note; however, G. ventrimaculatus differs by having the shortest call duration non-overlapping with other Laurentomantis species at 407-455 ms and a slightly faster note repetition rate of 21-24 notes/s. Temperature is not likely to be an important factor in the characteristic differences described here, as structural characters, such as clearly defined pulses, would not be affected by temperature ( Schneider 1974).

Motivation might affect number of notes emitted and, thus, call duration; however, the recording of G. ventrimaculatus is of a highly motivated male (i.e. many calls emitted in a short time) while the call of the new species was recorded from males which did not appear to be very motivated, emitting only 1-2 calls within an hour. Finally, comparisons could not be made to G. ranjomavo as calls were not available; however, the new species is clearly morphologically distinct (see above).

Description of the holotype.

After four years in preservative, dorsal ground colouration is a uniform dull brown including forelimbs and hind-limbs. The red colouration has faded to become light brown. Lighter coloured spots on ventral surfaces are still present.

In life (Fig. 2 View Figure 2 ), dorsal colouration is a dark grey ground colour with thick, bright red mottling distributed on the dorsum. Many of the raised ridges are dark grey with bright red edges. Lighter red stripe present short distance up the dorsum. Lateral head the same as dorsum, tympanum a lighter brown. Flanks are also dark grey, but have less bright red colouration, typically only found on ridges. Forelimbs have same colouration as dorsum, except bright red colouration is more spotted, with a few lighter red spots. Hind-limbs have same colouration as forelimbs, except with red crossbands present on the dorsal surface. A whitish annulus is present before the terminal disc on fingers and toes, fingers and toes light brown. Ventral surfaces brown, with no red present. White and light-yellow spots are present and scattered moderately along the ventre. Ventral sides of arms and hind-limbs brownish-grey, with light red spotting. Femoral glands lighter brown than surrounding limb surfaces. Single subgular vocal sac is light grey, with some light-yellow spotting down the centre. Jaw has scattered light-red spots along the lip. The pupil is black with a bright red iris, with black reticulations around the outer margin of the iris.

All paratypes resemble the holotype in morphology and colouration. In life, dorsal colouration varies slightly in the amount and intensity of red present. Spotting on the ventral surfaces varies in the colouration of the spots being white, light-yellow, light-orange or light-red. The vertebral stripe varies from being absent in some individuals to indistinct in others. Females lack femoral glands and have a granular texture on the femur.

Measurements of the holotype and paratypes are shown in Table 2 View Table 2 .

We recorded three calls from two males at Vohidrazana Forest after collection at ca. 02:00 hr on 6 January 2016. Males call infrequently with extremely quiet calls from the upper surfaces of leaves up to 50 cm above the ground. The recorded male was captured and placed in a separate plastic collecting bag. Males would not call when we were within recording distance, so we placed the microphone 100 cm away from the bag near where it was captured and moved several metres away. Calls were recorded during light rain at a temperature of 20.4 °C.

The phylogenetic results support the morphological diagnosis by placing Gephyromantis marokoroko within the Laurentomantis subgenus with strong support. At the species level, G. marokoroko is monophyletic with strong support in ML and BI analyses (BS = 100, PP = 1.00; Fig. 3 View Figure 3 ). Uncorrected p-distances, using the 16S fragment, indicate that G. ventrimaculatus has the lowest distance to the new species, at ~ 6-9%. The combined nine marker multi-locus dataset places the new species sister to G. striatus with strong support (BS = 98; PP = 1.00) in both BI and ML analyses (Fig. 4 View Figure 4 ). Overall, these results provide strong evidence that the species is a separately evolving lineage and strong evidence for the new species phylogenetic placement.

Gephyromantis marokoroko is apparently locally rare and, thus far, only found within undisturbed, primary forests at highland elevations (ca. 1000-1200 m). Individuals of the species were perched on the surfaces of vegetation less than 50 cm in height (Fig. 7 View Figure 7 ). The species was infrequently encountered, always after moderate to heavy rain, with multiple individuals occasionally grouped in small clusters (~ 20 m2). The species’ call is very quiet and irregular and is barely audible to a human observer, even within three metres of a calling individual. Individuals of the new species were often found syntopically with another Laurentomantis , G. sp. Ca13, which is a candidate species identified in Vieites et al. (2009). Other syntopic Gephyromantis include G. eiselti , G. salegy , G. sp. aff. plicifer (not yet assessed for a candidate species number) and G. cornutus .

The new species is known from Andasibe-Mantadia National Park and several other managed areas (e.g. Vohimana, the community managed Vohidrazana Forest and Tavalobe). However, as currently understood, the distribution of this species is severely fragmented and restricted to only four known high-elevation localities (~ 1000-1200 m), which are very small patches with no connectivity (Fig. 1 View Figure 1 ). Many other high elevation sites in the region have been surveyed by the authors over three field seasons. Furthermore, Vohidrazana Forest and Tavalobe face ongoing threats that result in the reduction of quality and extent of habitat. For example, slash-and-burn agriculture and forest products are frequently extracted directly from this species’ habitats that are outside protected areas. Given this information, we categorise this species as “Endangered” [B1ab(iii-iv)] following IUCN Criteria ( IUCN 2001). 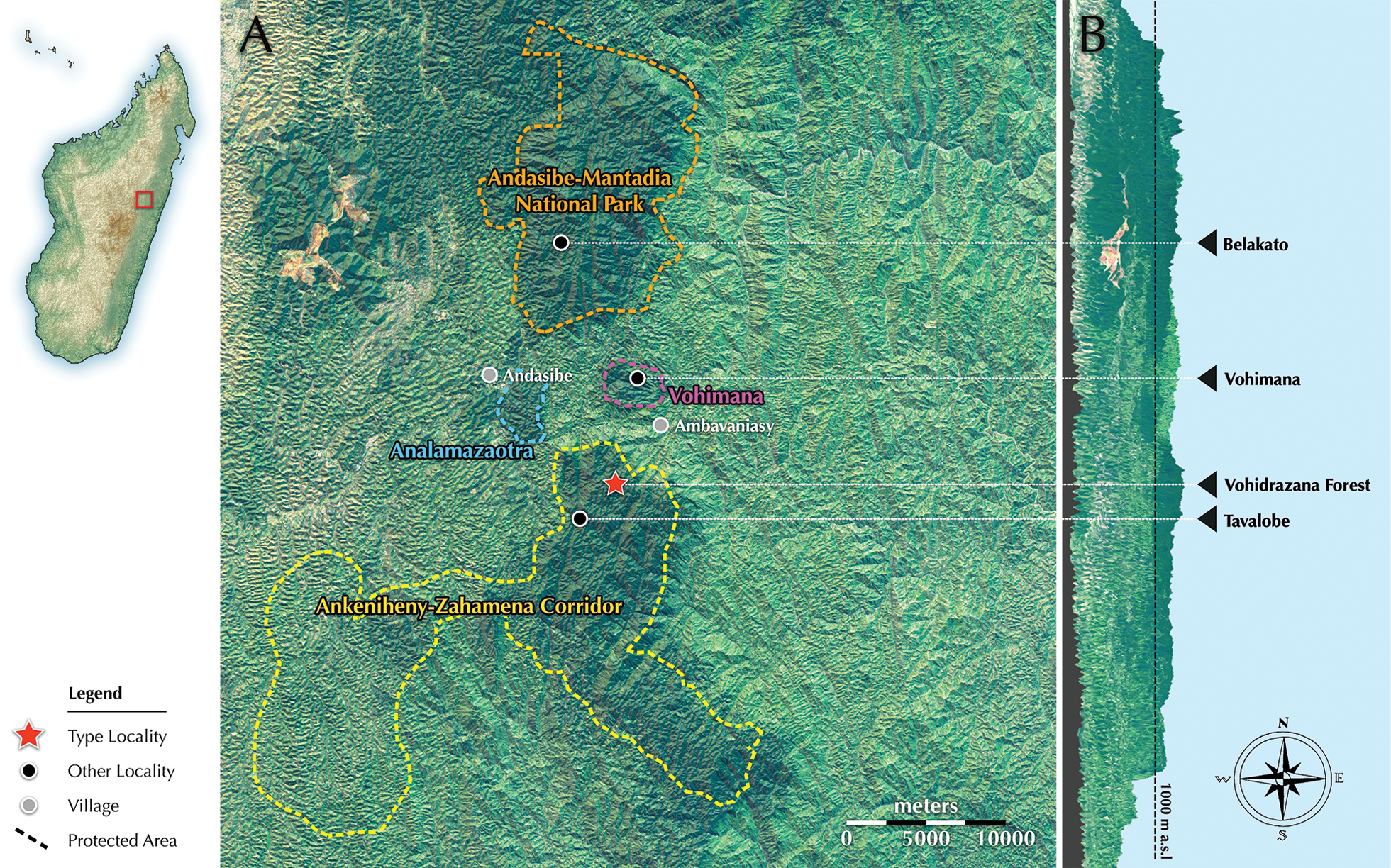 Figure 1. The distribution of Gephyromantis marokoroko sp. nov. in east-central Madagascar, view from above (A.) and from a profile view (B.). The black star marker indicates the type locality at Vohidrazana Forest where the black circle " locality " markers indicate other confirmed localities for the new species. Gephyromantis marokoroko sp. nov. is also found at high elevations and, thus, is likely distributed at other high elevation sites not surveyed. Elevational and satellite imagery data acquired from the USGS Earth Explorer (http: // earthexplorer. usgs. gov).

Figure 1. The distribution of Gephyromantis marokoroko sp. nov. in east-central Madagascar, view from above (A.) and from a profile view (B.). The black star marker indicates the type locality at Vohidrazana Forest where the black circle " locality " markers indicate other confirmed localities for the new species. Gephyromantis marokoroko sp. nov. is also found at high elevations and, thus, is likely distributed at other high elevation sites not surveyed. Elevational and satellite imagery data acquired from the USGS Earth Explorer (http: // earthexplorer. usgs. gov). 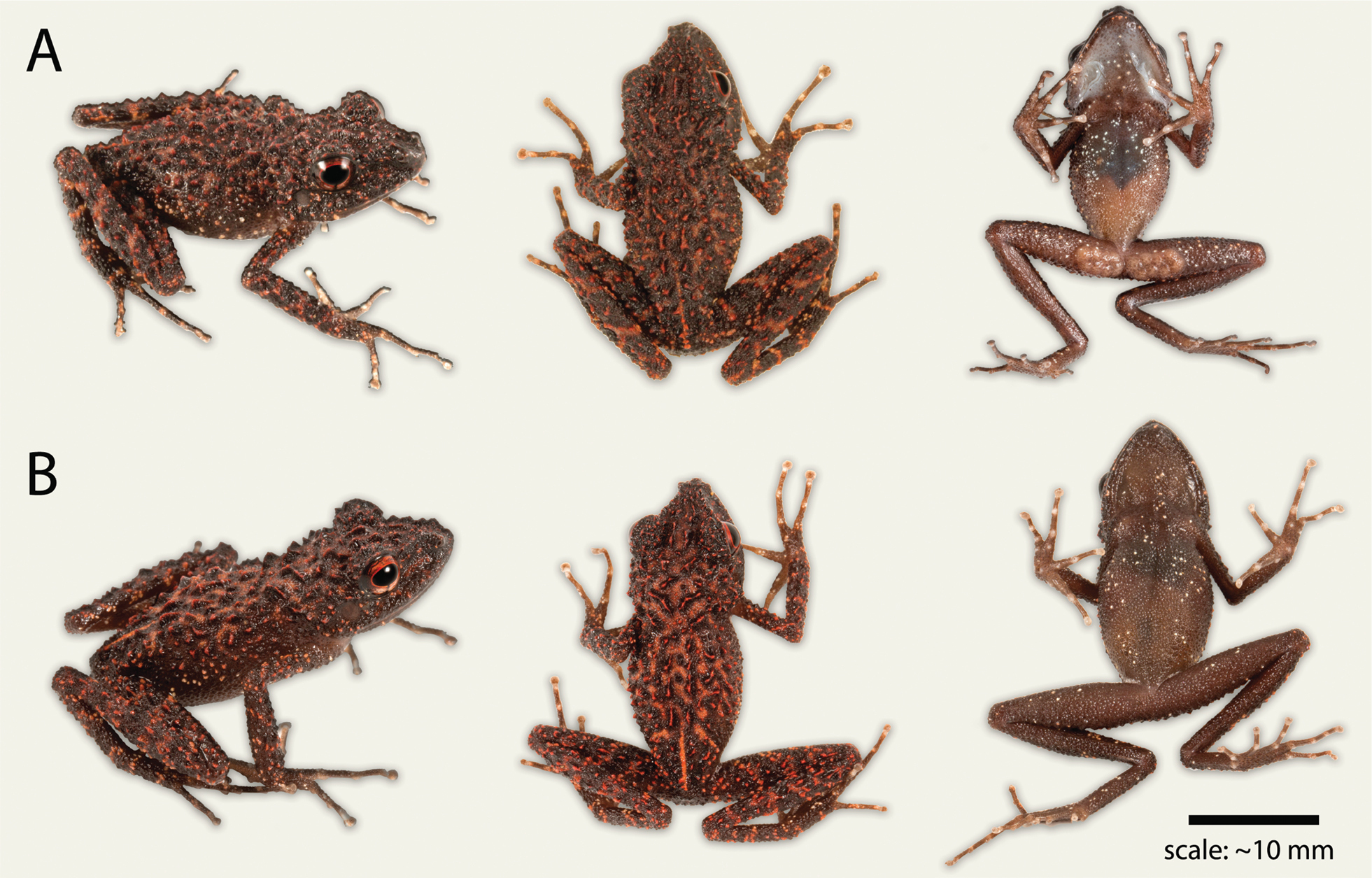 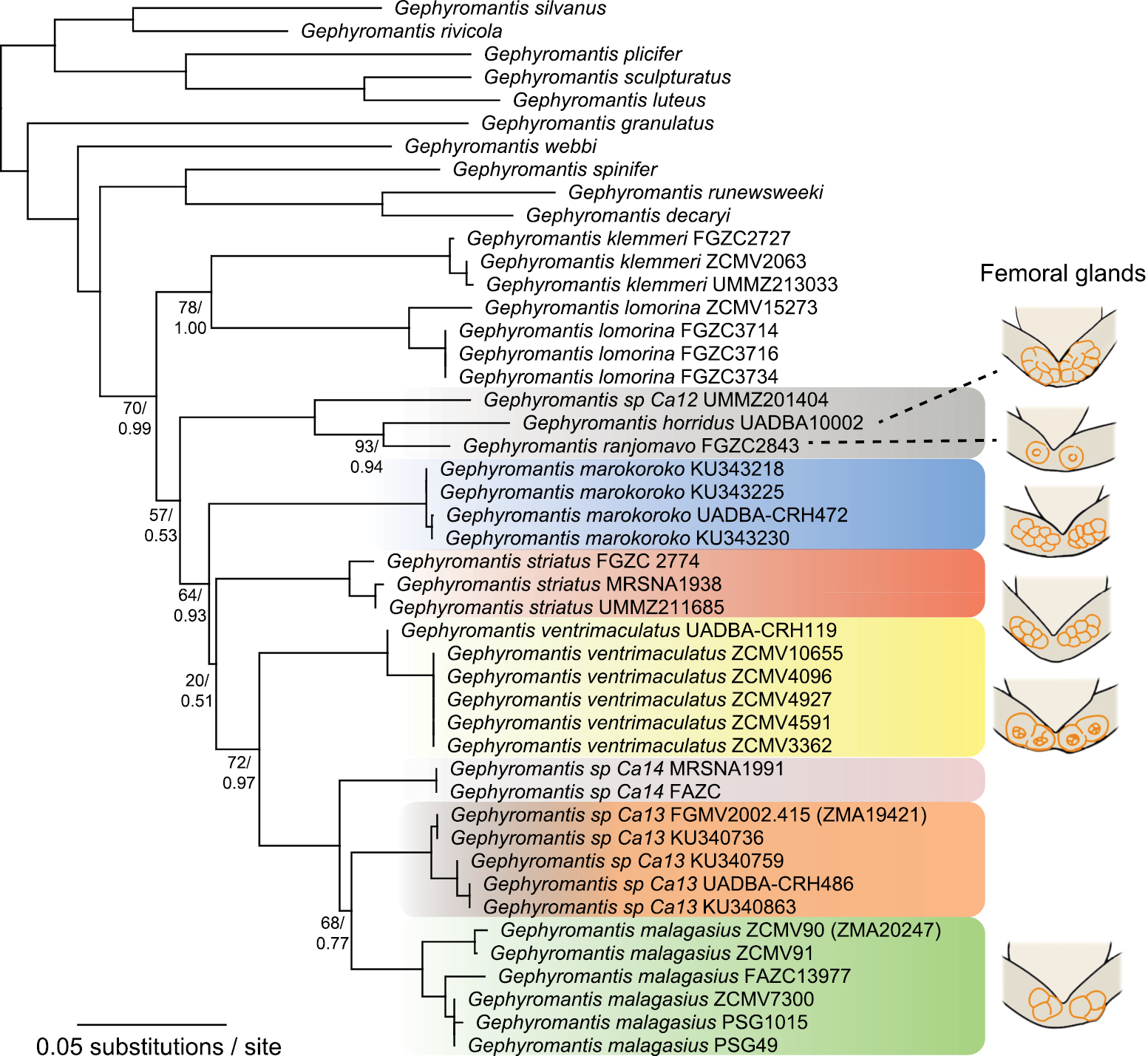 Figure 3. Results of phylogenetic analysis of the mitochondrial 16 S rRNA barcode 3 ' marker for Maximum Likelihood (ML) and Bayesian Inference (BI). Topology is a consensus tree from IQ-Tree. The support values are shown as Bootstrap on top and Posterior Probability on the bottom only for nodes that were not perfectly supported. Note that Gephyromantis marokoroko sp. nov. placement in the clade is weakly supported in both analyses. 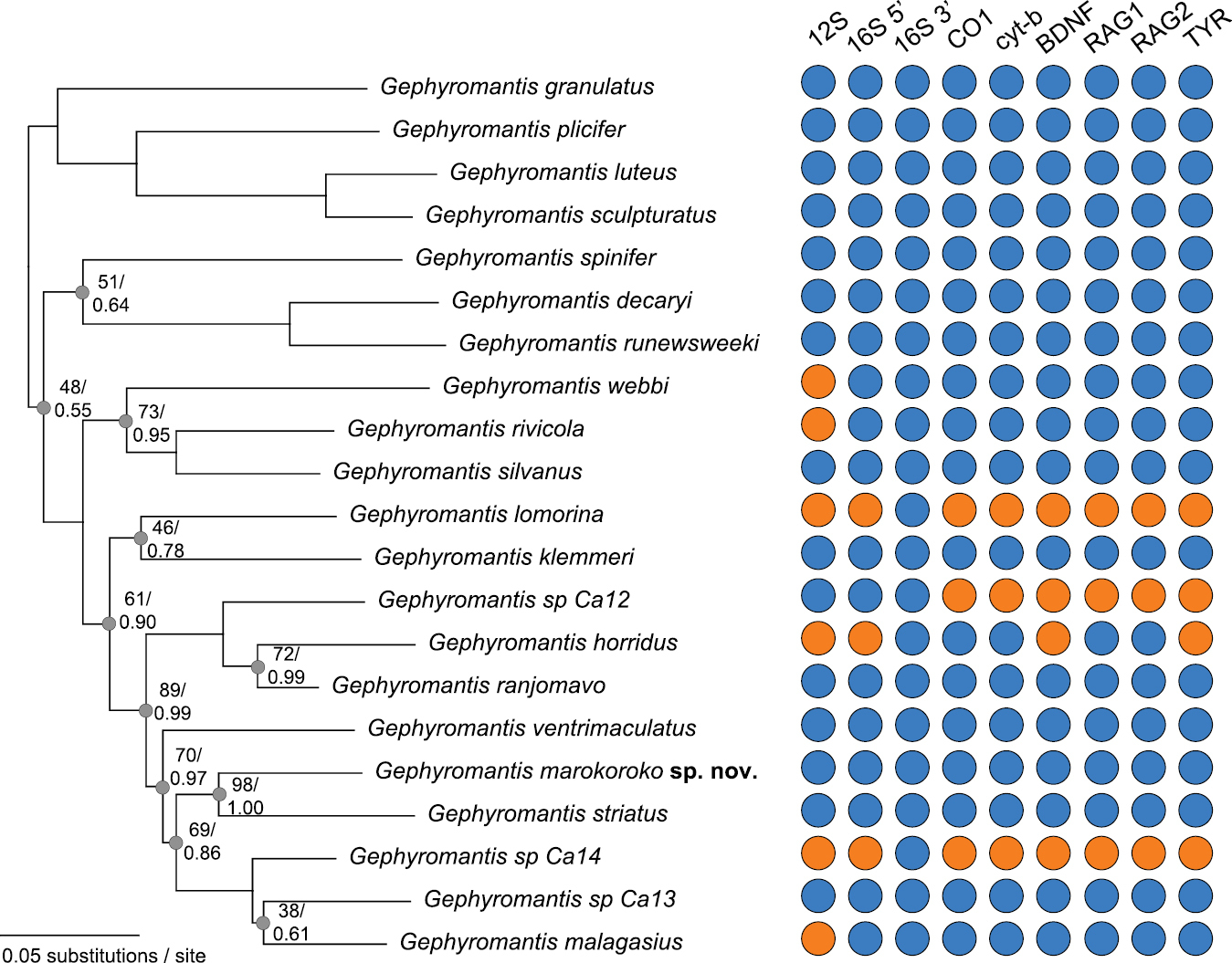 Figure 4. Results of phylogenetic analyses of the concatenated alignment of five mitochondrial and four nuclear markers for Maximum Likelihood (ML) and Bayesian Inference (BI). Topology is a consensus tree from IQ-Tree. On the right, the dots represent markers that were present in blue and absent in orange for each sample. The notes marked with a circle are those that did not receive perfect support (Bootstrap = 100; Posterior Probability = 1.00) from ML and BI, with the support values as BS on top and PP on the bottom. Note that Gephyromantis marokoroko sp. nov. has strong support in both analyses for a sister relationship to G. striatus. 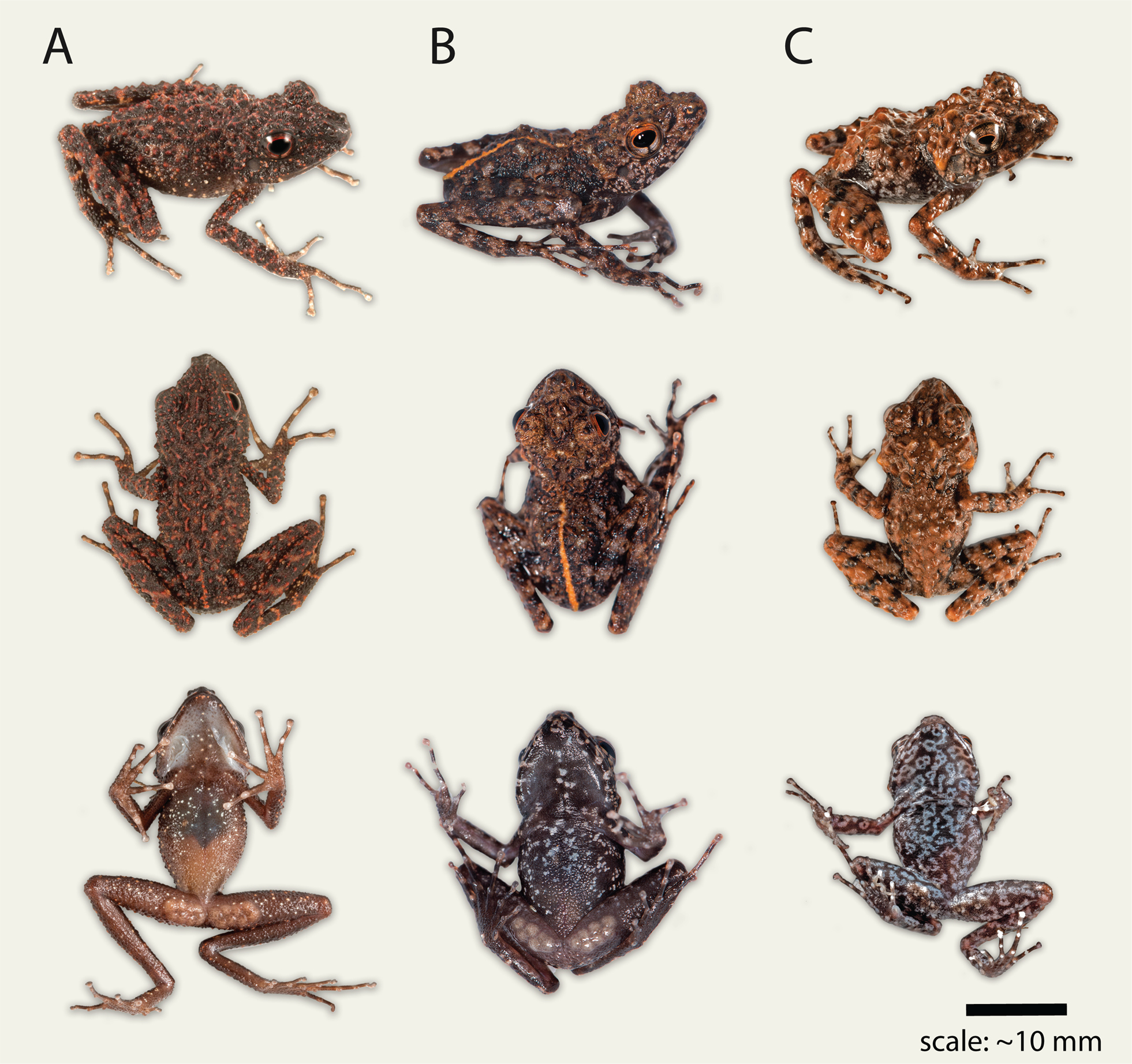 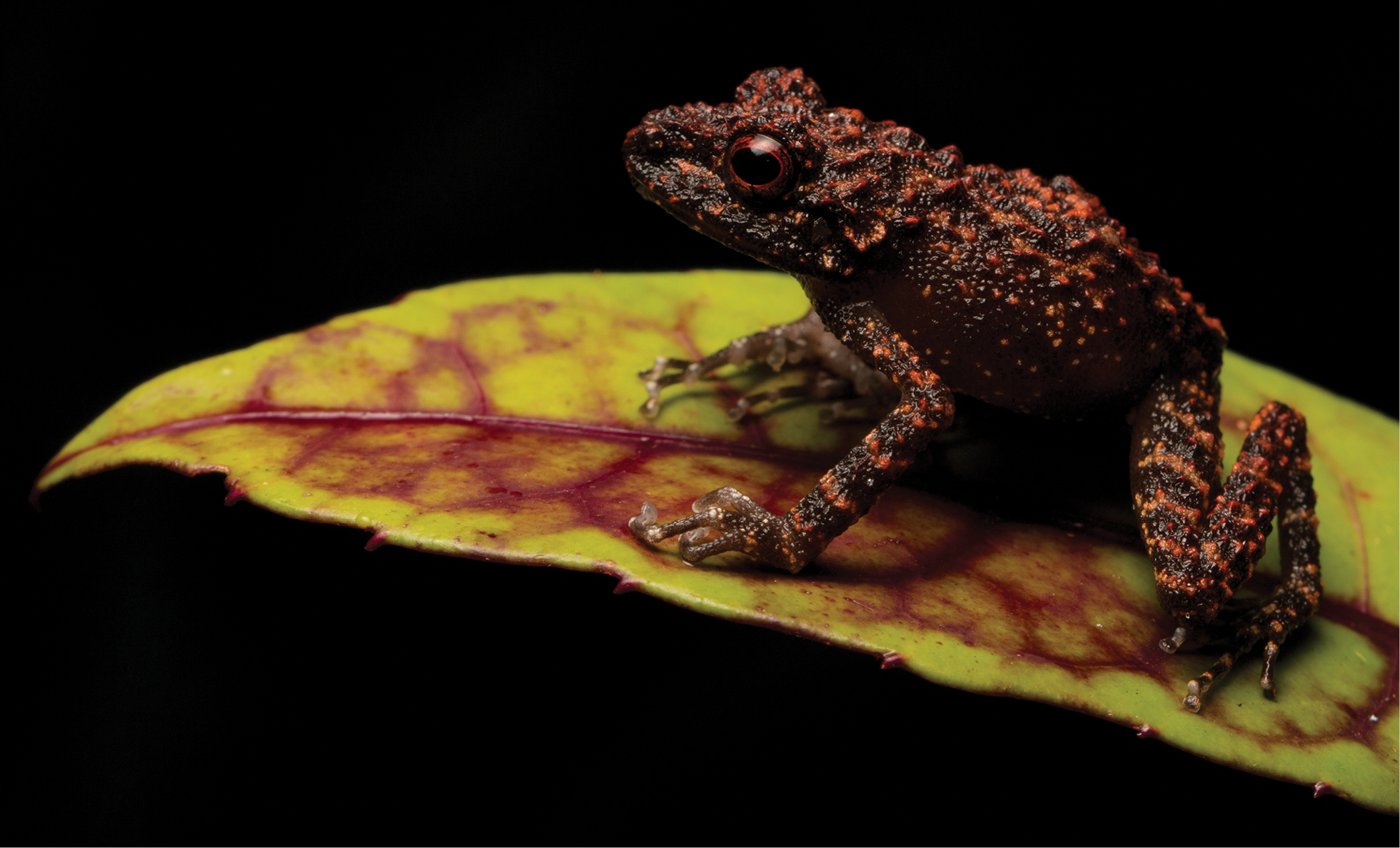