Diagnosis: Neotima   medusa with gonads along radial canals interrupted for some distance, resulting thus in eight gonads in total.

Etymology: The species is dedicated to the collector of the type material, Dr Horia Galea, in appreciation of his admirable work on hydrozoan systematics.

Description: Medusa nearly hemispherical, diameter 9-11 mm. Aboral jelly thick, 1/3 or more of total height, with a broad gastric peduncle of about the same length as the bell height, basal diameter about half the diameter of the bell, tapering in an even curve to a diameter slightly smaller than stomach diameter. Manubrium small, 1.2 mm high, bell-shaped, mouth opening cruciform as margin drawn out into four perradial lips, entire mouth margin in numerous folds. 26-28 tentacles of which 4 always perradial, contracted 6-7 mm, not coiled, bases laterally compressed, no bulbs, no longitudinal furrows. Between each pair of tentacles 2-7, mostly 4-6, marginal warts, sizes variable but apparently not developing into tentacles, without adaxial papillae. Observed statocyst numbers 6-8, likely normally 8, number of concretions unknown. Cirri absent. Gonads along the four radial canals, reaching from close to junction with circular canal to manubrium, but interrupted for a stretch in middle of the peduncle, gonads thus subdivided into a total of eight gonads, diameter of gonads relatively small compared to other leptomedusae, not much thicker than tentacle base.

Remarks: The number of concretions in the statocysts could not be determined as these were missing due to the initial preservation in formalin.

The new species matched the diagnosis for the genus Neotima Petersen, 1962   (see also Bouillon et al., 2006), except for the subdivided gonad (see remarks above). It resembles Neotima lucullana ( Delle Chiaje, 1823)   , but this Mediterranean species is much larger (diameter up to 87 mm), has a thin aboral jelly, about twice as many tentacles, the tentacles have an abaxial groove, and the gonads are undivided ( Petersen, 1962). The only other known Neotima   species, Neotima peterseni Bouillon, 1984   , has a similar size and tentacle number as the new species, but the bell shape and thickness of the mesogloea are different, as well as the gonads being undivided (comp. Bouillon, 1984: table 3).

Neotima galeai   can potentially be confused with Eutima hartlaubi Kramp, 1958   , a species occurring in the same biogeographic zone. However, the latter species is distinguishable by having marginal warts with lateral cirri, only 12-14 tentacles, and an abaxial spur at the tentacle base ( Kramp, 1958; 1968).

The gonads of Neotima galeai   are relatively thin and one is tempted to regard the observed medusae as subadult. However, the other Neotima   species also have thin gonads and this seems to be a characteristic trait of the genus and also many other species of the family Eirenidae   . 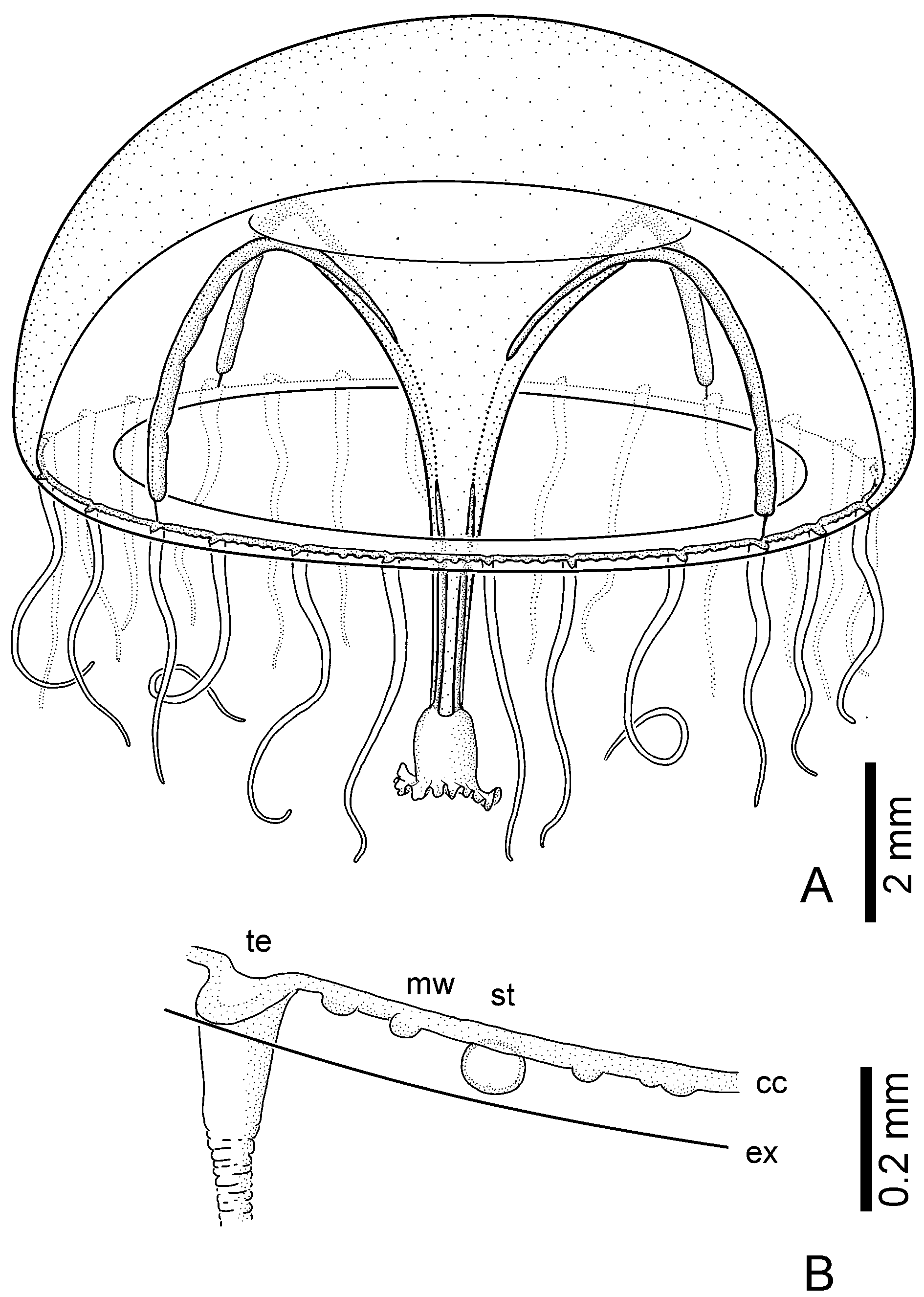