Diagnosis. As in worker diagnosis, but with caste-specific structures related to wing-bearing and presence of small ocelli on head. Mandible with seven teeth. Eye not unusually large (MOD <0.45, OI <28.50, MR usually> 1.05). All mesosomal surfaces except for mesoscutum and mesoscutellum with prominent rugae; sculpturing absent on mesoscutum and mesoscutellum except for scattered punctures and occasional faint longitudinal striae ( Figure 7 View FIGURE 7 ). Posterior face of petiole and dorsum of postpetiole weakly to moderately granulate or with weak tranverse rugae. Base of scape rounded; superior and inferior lobes poorly developed, no wider than width of scape base.

Description. As in worker diagnosis, but with caste-specific structures related to wing-bearing, presence of small ocelli on head, and as illustrated in Figure 7 View FIGURE 7 . Small, only slightly larger than conspecific workers. In full-face view, head quadrate to broader than long, posterior margin flat. Dorsum and sides of head conspicuously rugose, in side view rugae forming circumocular whorls posterior to eyes or rugae converging near vertex, interrugal spaces smooth and strongly shining. Mandible with seven teeth, dorsal surface coarsely rugose, strongly shining. Eyes not large (OI = 22.47–28.47), MR usually> 1.05, MOD ranging from 0.25–0.30 x HL. Base of scape not flattened; superior and inferior lobes poorly developed, no wider than width of base of scape.

Etymology. The specific epithet honors Prof. Dr. Bert Hölldobler, who was an “ant god” during the tenure of RAJ in graduate school and beyond—and who now is a good friend, colleague, collaborator, and supporter who is dedicated to understanding all aspects of ant biology. His continued child-like enthusiasm for learning about ants and his earnest interest in helping students invigorate all of those around him.

Pogonomyrmex hoelldobleri also occurs in sympatry with P. californicus and is likely to occur in sympatry with P. mohavensis , but it has a low likelihood of co-occurring with P. m a r i c o p a. Pogonomyrmex hoelldobleri can be distinguished from P. mohavensis based on the following characters: (1) P. hoelldobleri has seven teeth, (2) the interrugal spaces on the pronotal shoulders are weakly to strongly punctate/granulate, dull to sub-shining, and (3) the cephalic rugae typically converge near the vertex. In P. mohavensis , the mandible has six teeth (a seventh sometimes occurs as a denticle between the basal and sub-basal teeth), interrugal spaces on the pronotal shoulders are smooth and shining, and the cephalic rugae extend more or less directly to the vertex or converge only slightly near the vertex. Two other P. californicus group species ( P. anzensis and P. snellingi ) also occur in the Sonoran and Mohave Deserts, but it is doubtful that P. hoelldobleri occurs sympatrically with either species; P. anzensis occurs in unproductive, rocky hillside habitats unlike any sites that are known to be occupied by P. hoelldobleri , while P. snellingi is well removed from the probable geographic distribution of P. hoelldobleri . Regardless, the absence of circumocular whorls separates P. hoelldobleri from both species. 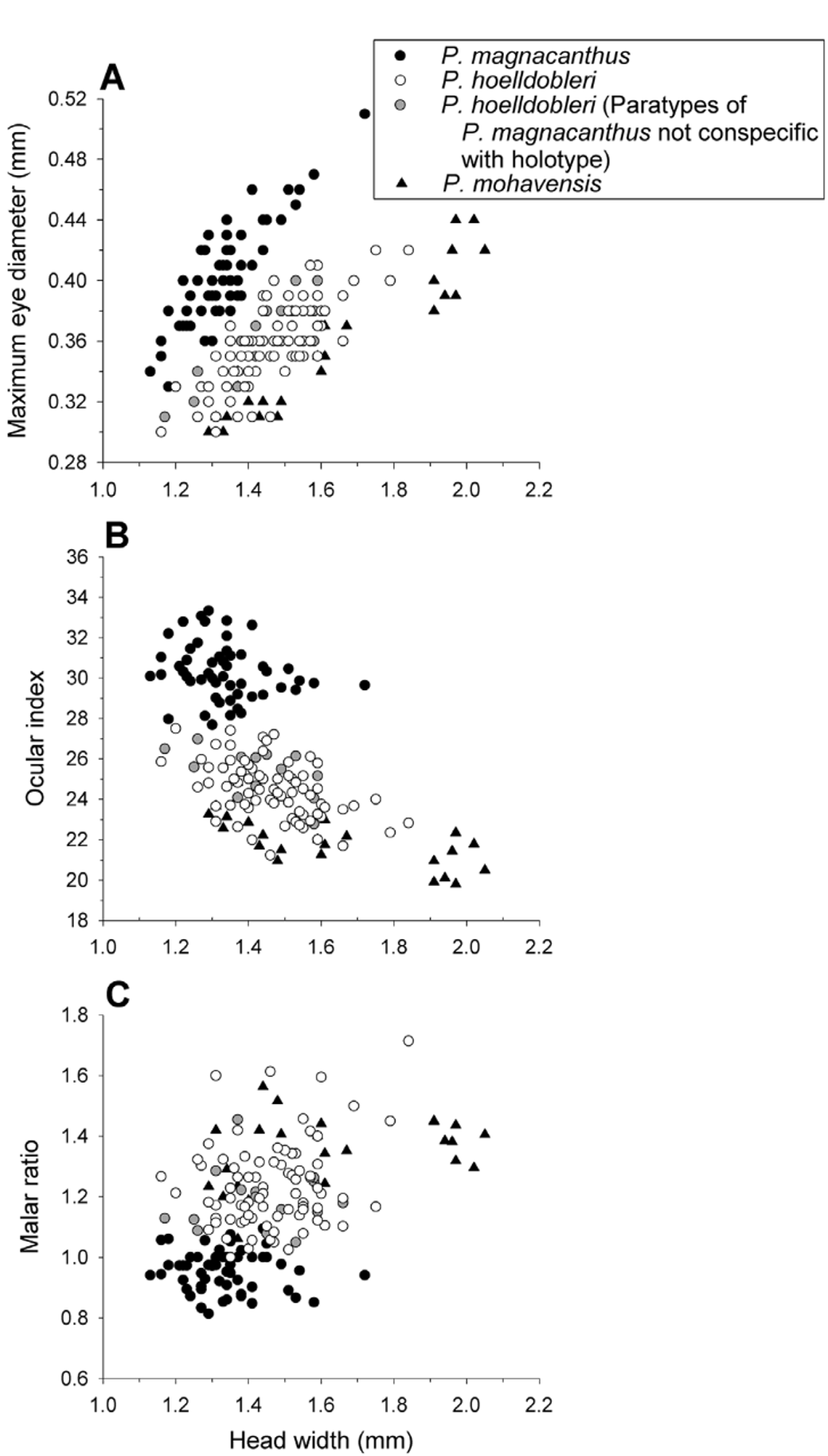