( Butchart et al. 2005). Classified as Data Deficient in the IUCN Red List (BirdLife International 2020), the disappearance of this species from the ornithological radar was not helped by the fact that only one specimenprocured between 1843 and 1848—was ever collected, and the holotype was never clearly linked to a specific type locality. Evaluating the evidence to hand, Mees (1995) assumed that the type locality was likely to have been near Martapoera [Martapura] or Bandjermasin [Banjarmasin] in present-day South Kalimantan province, Indonesian Borneo, where the species has been mapped ever since ( Myers 2009, Phillipps & Phillipps 2011, Eaton et al. 2016).

On 5 October 2020, we observed a live specimen of the Black-browed Babbler in south-east Kalimantan   ,

the first sighting of this species for 170 years ( Plate 1 View Plate 1 ). The bird was obtained by two local residents (MS, MRF) after being observed several times during their daily visits to the forest. Based on photographs taken of the bird during its temporary captivity (before its eventual release back into the wild), we took detailed notes. We were also able to make comparisons with the type specimen which is now deposited at the Naturalis Biodiversity Center, Netherlands, and available online (through Oriental Bird Images at http:// orientalbirdimages.org /search.php? Bird _ ID=1428&Bird_Image_ID=28450). The bird had a stout appearance, with a relatively short tail and a robust bill consistent with the holotype ( Plate 2 View Plate 2 ). The upperparts were rich brown, while the underparts up to the breast were greyish with fine white streaking. The facial appearance of the bird was very distinct, with the crown being chestnut-brown, demarcated by a broad, black eye-stripe extending across the malars to the nape and necksides (see also Eaton et al. 2016). The irides were deep red and unlike the holotype, which has been given artificial yellowish eyes. The legs were dark slate-grey, not brownish as illustrated in Eaton et al. (2016). The individual we observed was very d ist inct, a nd un like a ny ot her species of Malacopteron   or Malacocincla   babbler on Borneo, which we are familiar with through our fieldwork in the Greater Sundas. The bird was safely released in the original place it was captured.

We conclude that our discovery represents the first ever documentation of the ‘lost’ Black-browed Babbler in over 170 years, the longest known ‘missing period’ for any Asian species ( Butchart et al. 2005). We are now in the process of preparing a more detailed manuscript documenting our discovery, and expect this to be published in the coming months. 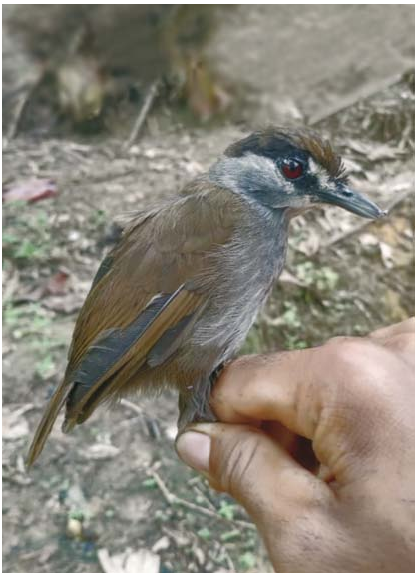 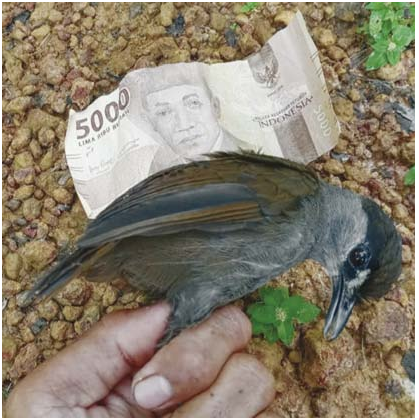 Plate 2. Black-browed Babbler alongside a 5,000 Indonesian Rupiah note for scale,October 2020.