Diagnosis. — Distinct from other Southeast Asian phrurolithines by the wide, convex head, the armoured body with reduced thoracic groove, the rebordered sternum, the absence of spines on the femora, the pedicel imbedded in a chitinous ring and the short ovoid abdomen. In males, the abdomen usually is dorsally covered with a scutum over the full length, ventrally there is an epigastric scutum and a partial postgenital scutum; in females, the dorsal scutum and postgenital ventral scutum are lacking, the epigastric scutum consists of a central epigynal plate and separate lateral plates ( fig. 710 View Figs 705 - 711 ). The posterior eye row is recurved, the eyes equidistant. The leg tarsi are relatively shorter (average 50% of metatarsi) than in Plynnon and the tarsi of leg I and II bear 2 pairs of ventral spines. The male palpal femur is most often transformed, with one or more projections, the tibia in the species studied has a large proximal conical apophysis with or without adjacent tooth. The expanded lightly sclerotised tegulum is characteristic. The vulva has a pair of transverse rod-shaped spermathecae near the epigastric fold, well visible through the tegument, the bursae have a chitinous base by which they attach to the insemination duct.

Description.— Small dark to reddish-brown spiders (1.70-5.00 mm), vaguely ant-like in appearance. Most species have contrastingly marked legs and a pattern on the abdomen, some species are uniform in colour. Thoracic groove reduced. AER procurved when seen in front, both eye rows recurved in dorsal view, AME equal to or smaller than ALE, PER recurved and wider than AER. Clypeus 1-2 diameter of AME, chilum obsolete or small and triangular. Chelicerae with 2-3 promarginal and 2 retromarginal denticles, frontal spines lacking. Labium as long as wide. Sternum a little longer than wide, truncate between coxae IV, with spaced pits. Intercoxal triangles with round pit. Retrocoxal window absent. All femora spineless, anterior tibiae with 5-7 pairs of strong ventral spines, metatarsi with 4 ventral pairs, all spines with tuberculate base; posterior legs spineless. Leg IV same length as leg I or slightly longer. Tarsal claws short, probably toothless. Pedicel a tubiform sclerite, separate from sternum and ventral scutum. Males most often but not always with entire dorsal scutum and ventrally an epigastric scutum which anteriorly is not continuous with the pedicel, and usually ventrally with postgenital scutum; females without dorsal scutum; ventrally, epigastric scutum divided into central epigynal plate and two lateral plates. AL spinnerets slightly parted, PL spinnerets without visible distal segment, PM spinnerets in female enlarged and slightly compressed laterally, with truncate tip on which 5-7 large spigots. Male palp with femur usually with some sort of modification, tibial apophysis interacting with a process or knob apically on the femur, in the typical species tegulum enlarged and sclerotised, with laterally a U-shaped duct, embolus conical. Basal haematodocha often twisted so that bulb is shifted over a half turn, with embolus on proximal end. Tegulum lacking other appendages. Vulva with paired openings anteriorly, often marked with pitch black (plugging substance?), a membranous bursa of sometimes large dimensions and heavily sclerotized ducts; bacilliform or oval spermathecae located posteriorly. Bursae shrink, reversibly, when immersed in clove oil.

Habitat.— Species of Orthobula are very versatile. They have been found in dark humid rainforest, but also in the dry steppes and deserts of Central Asia; most specimens were collected in leaf litter on the ground, one specimen has been found in the canopy of Dumoga Bone National Park in N Sulawesi. 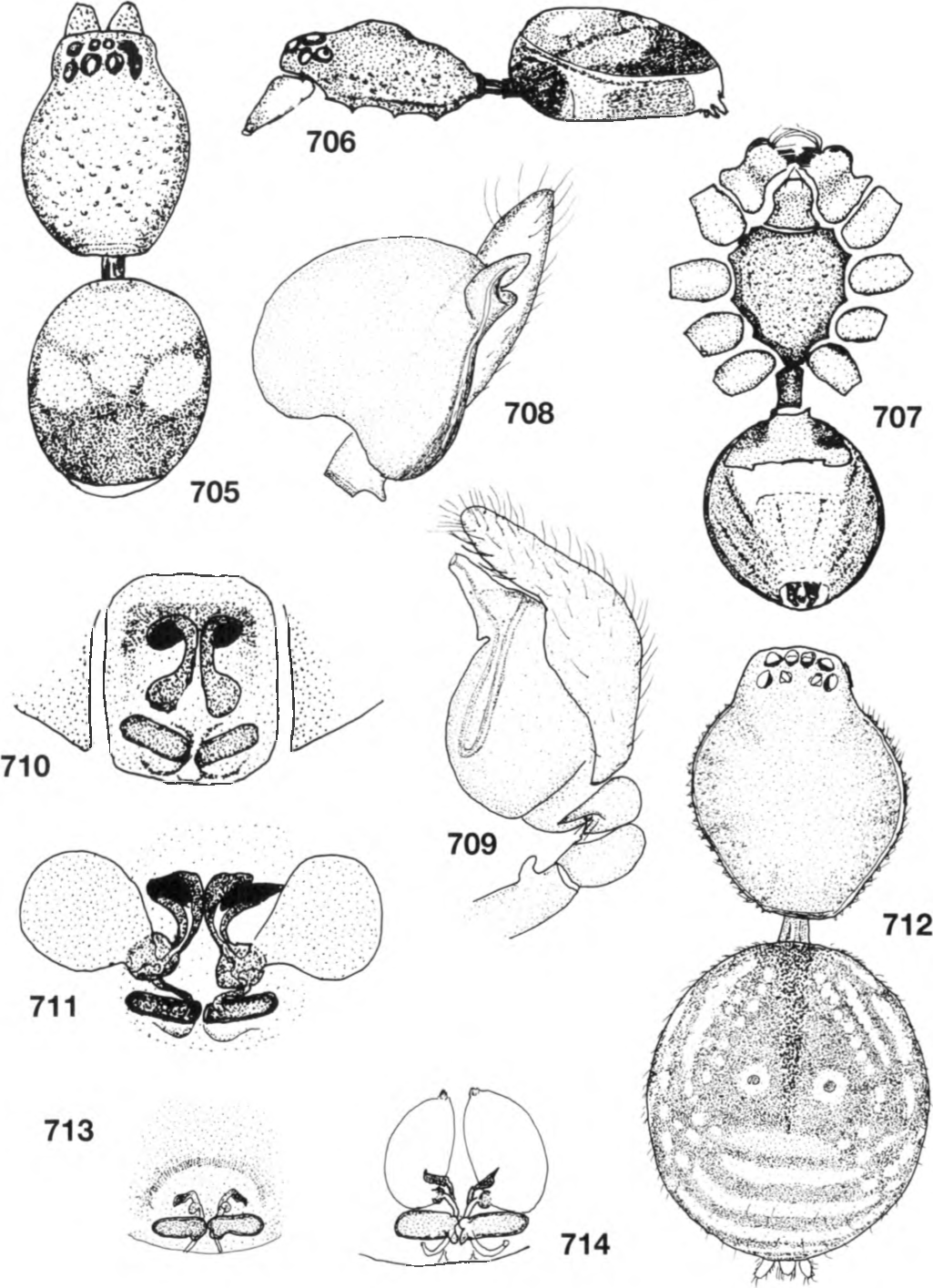