Amorim, Dalton De Souza, 2007, Two new genera of Swammerdamellini (Diptera, Scatopsidae), with a discussion of the position of the species of Rhexoza, Zootaxa 1640, pp. 41-53: 48

Description. Body length, 1.30 –2.00 mm long. Blackish brown specimens, usually with grey halteres. Flagellum with 8 flagellomeres, each with two regular crowns of setae. Maxillary palpus well developed, rather reniform, with a shallow, elongated sensory pit. Thorax only slightly elongated. Wing translucent. Venation like most Swammerdamellini, with no trace of M 1 –R 5 spurious vein nor of an angle at the basal fourth of M 1; C 2 rather short, L/C 1, 3.1, L/C 2, 4.6, L/C 1 + 2, 2.0. Pretergites present on segments 2 and 3. At least some species with sternite 4 present, but some species with sternite 4 or sternites 4 and 5 unsclerotized. Male tergite and sternite 7 with an inner sclerotized line along anterior margin, some species with an additional lateral lines of sclerotization. Sternite 7 always with a mesal posterior incision, in some species with other kinds of ornamentation on posterior margin. Spiracle of male and female segment 7 always at the membrane. Female tergite and sternite 7 rectangular, with no differentiation. Male terminalia elongated in all species except in C. incisa   . Gonostylus always absent. Sternum 9 with meso –ventral arm elongated and dorsal arms virtually absent. Parameres usually displaced distally. Aedeagal plate dorso –ventrally compressed. Aedeagal opening at the apex of a short projection at the base of the aedeagal sclerite; in species with elongated male terminalia, aedeagal plate produced, also elongate. Cerci always absent.

Etymology. This genus is named after Dr. Edwin F. Cook, who dedicated more than 30 years to the systematics of the Scatopsidae   , producing a consistent morphological and taxonomic study of the group. Of all subfamilies, tribes and genera of the family under his system, only one tribe and one genus showed to be paraphyletic. Major recent achievements in Scatopsidae   systematics would not be possible without Cook's prior studies on the group.

Discussion. Four Nearctic species described by Cook (1975) and two other Nearctic species included in Rhexoza   fit in this new genus. They compose a monophyletic group, as suggested by the flattened aedeagal plate and the fusion of the Y –shaped sternite 9 to the anterior arms of the gonocoxites. Within the tribe, the genus composes a monophyletic group with the genera Akorhexoza   , Quateiella   , Abrhexosa   , and Brahemyia   , gen.n. indicated by the shape of the laterally compressed tergite 9. The distal extension of the aedeagus, composing an “aedeagal plate” is an apomorphy also seen in Quateiella   , Cooka   , and Brahemyia   , apparently absent by secondary loss at least in some species of Abrhexosa   . The wide ventral arm of the sternite 9, nearly closing the space between both dorsal arms is an apomorphic feature shared by the species of this genus with Brahemyia   , suggesting that they may be sister genera within the tribe. The species included in the genus have been quite well illustrated by Cook (1956 a, 1975). 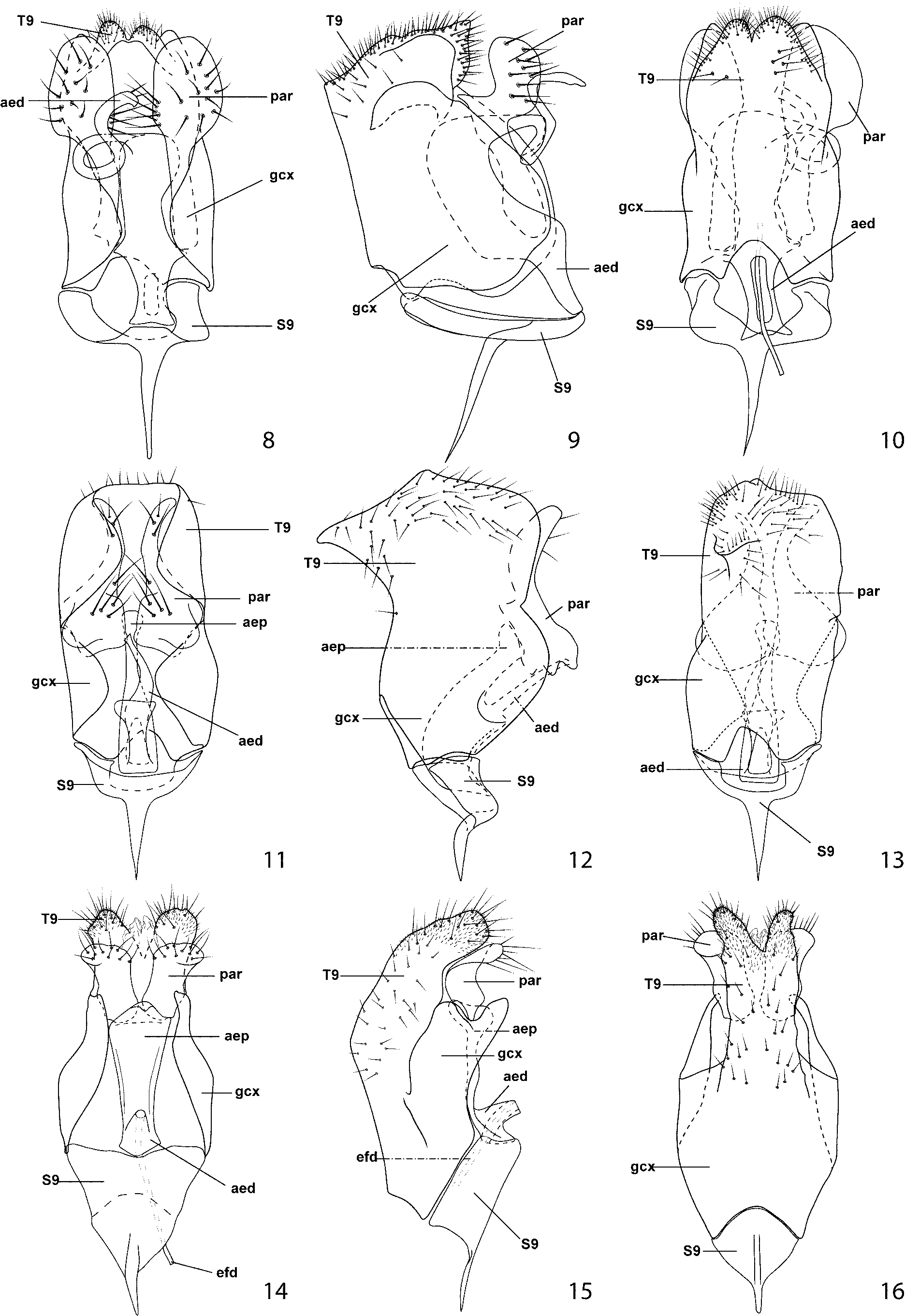