Molecular results. Specimens identified as Comatella nigra  and C. stelligera  formed reciprocally monophyletic groups in both the parsimony and likelihood analyses ( Fig. 2View FIGURE 2), with a minimum of 5.3% uncorrected COI distance between the taxa. Notably , specimens identified as Comatella nigra  from Lizard Island  , Australia, showed an even greater intra specific divergence, with up to 6.3% uncorrected COI distance (n=13); this taxon may thus represent at least two different species (= Comatella nigra  and Comatella nigra  B in Fig. 2View FIGURE 2). Specimens of Comatella nigra  type B are minimally 4.9% divergent from remaining specimens of C. nigra  with an intra type divergence of less than 0.20%. The remaining C. nigra  terminals were up to 4.8% divergent from one another, and may also represent multiple species. The type locality for C. nigra  is Bohol  , Philippines (syntype: RAME R114); no specimens were sequenced from this region, and we have so far found no clear way to split the group into separate species on either molecular or morphological evidence. The type locality of C. maculata  ( NHM 88-11-9 - 103) (see below) is Prince of Wales Channel , between Queensland  , Australia, and Papua New Guinea; that of C. stelligera  ( NHM 88-11-9 -104) is Fiji  .

Remarks. Comatella  differs from all other Pacific comatulids in having comb teeth along the edge of the pinnule closest to the arm (a homoplastic trait shared with western Atlantic Nemaster  ) ( Fig. 1View FIGURE 1 L). Comatella  previously included three species that appeared to represent an ontogenetic series based on size. Messing (1998b) synonymized the smallest, C. maculata  , with the next largest, C. stelligera  . This synonymy is supported by sequencing of specimens herein. Specimens morphologically assigned to C. maculata  and C. stelligera  were less than 0.08% divergent in COI (uncorrected distance). Molecular results also differentiate C. stelligera  from the largest species, C. nigra  . In addition to size and molecular data, C. nigra  differs from C. stelligera  in having asymmetric axils on IIBr and following brachitaxes that produce twisted rays, visible in both juvenile and adults. In C. stelligera  , all arms radiate in a single plane.

During the day, Comatella  species on reefs are cryptic and curled up beneath coral slabs, rubble or ledges, or deep within branching coral colonies ( Fig. 1View FIGURE 1 G –J). Arms, especially of large specimens in deeper water (> 15 m), may extend from crevices or under corals with pinnules arranged in a multidirectional, or tetrad, posture (i.e., successive pinnules offset so that they form four rows along an arm) ( Meyer & Macurda 1980). At night, individuals may be completely exposed on coral heads or among dead or living coral branches, or only the arms may be visible. However, on the Great Barrier Reef on expanses of sediment in 12–17 m, Messing et al. (2006:165) found C. nigra  “exposed, clinging to the downcurrent side of algae (e.g., Halimeda  sp.) with some arms lying at least partly against the sediment. Under unidirectional flow, it forms a multilayered arcuate fan with successive pinnules slightly offset. Under reduced flow, the arms form an irregular meridional array.”

For specimens herein referred to as C. stelligera  , we observed two discrepancies relative to previous descriptions: IIIBr sometimes united by syzygy rather than by synarthry only, and 1+2 or 3+4 on undivided arms, rather than 1+2 and 3+4. 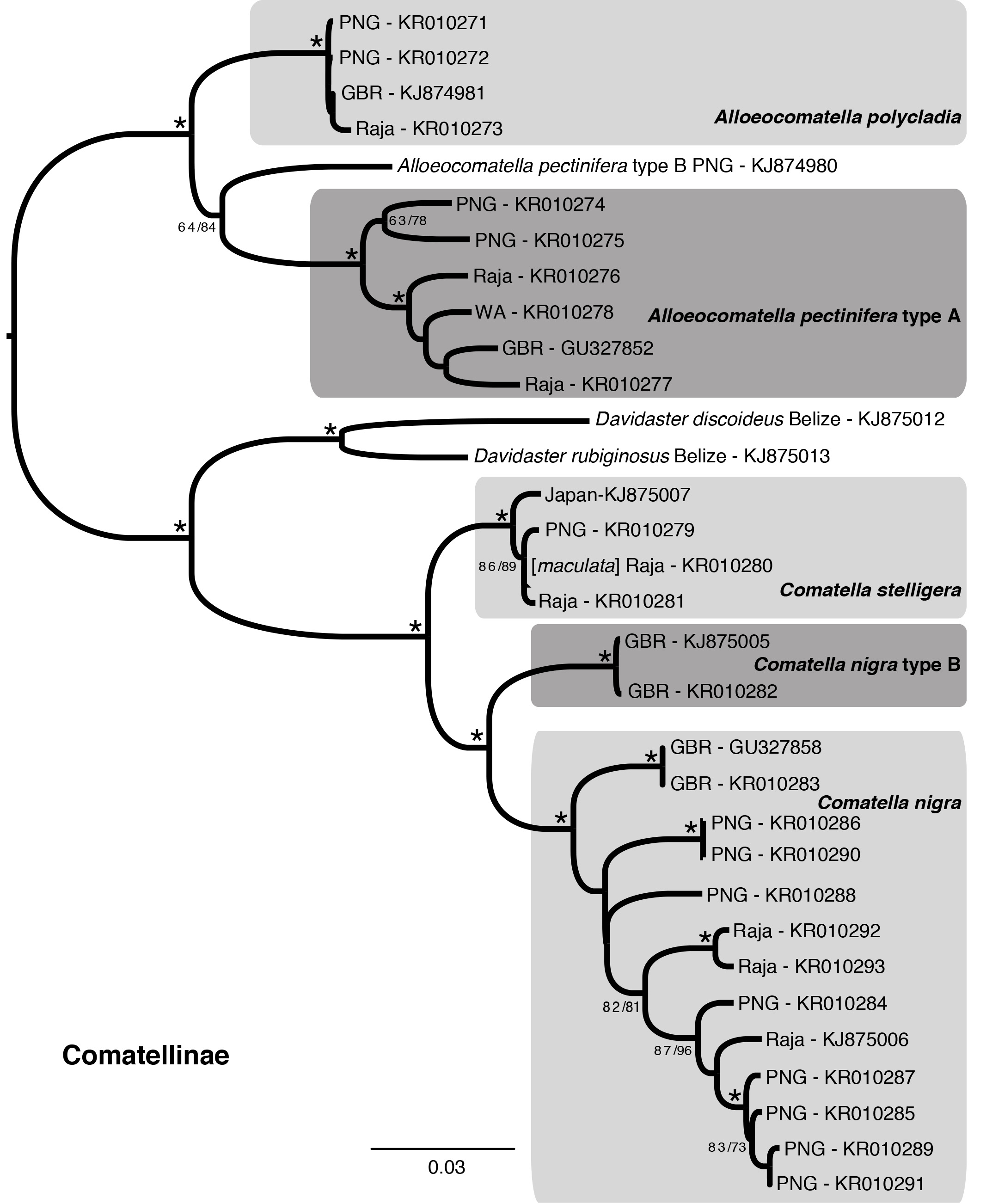