Taxonomic comments. Z. argoliensis was an insufficiently known species recorded from Greece. It was described on the basis of a female found in Peloponnisos, Argolida by C. L. Koch (1839). A female of this species from Korfu was examined by the author. The examination of paratypes of Z. balcanicus from Bulgaria and other comparative material from several localities in Greece as well as the figures provided in Deltshev et al. (2006) (p. 711, Figs 2–11 View FIGURES 2 – 5 View FIGURES 6 – 9 View FIGURES 10 – 13 ) leave no doubt that the two species are identical. Also the newly described species Z. baram by Levy (2009) (p. 31, Figs 67–70) conform to the distinct characters of the same species, namely the prolaterally extended terminal apophysis of the palpal organ (TA) ( Fig. 25 View FIGURES 25 – 28 ), the embolic projection (EP), the large embolar base with the embolus (E) hidden behind it and only visible from retrolateral view ( Fig. 26 View FIGURES 25 – 28 ) and the shape of the long epigynal posterior margin ( Fig. 27 View FIGURES 25 – 28 ). The similarities of the latter species were confirmed by the examination of the male holotype and the female paratype of Z. baram , although small differences may be observed. In the types of Z. baram the embolic projection of the bulb is wider ( Fig. 30 View FIGURES 29 – 30 ) and the glandular heads of the introductory ducts of the vulva are situated higher towards the introductory orifices. These differences are considered intraspesific variation. Therefore Z. argoliensis remains as the valid name, as it is the oldest.

Diagnosis: Z. olympi presents very distinct characters on its bulb, such as the ventrally protruding terminal apophysis with a bifid end and an anterior dorsal sclerite with characteristic shape. Females of this species differ from congeners of the same group by the almost straight and parallel epyginal lateral margins and the separated anterior margins extending further out of the lateral ones.

Taxonomic comments. Z. olympi was an insufficiently known species described on the basis of a female recorded from Turkey (Olympus Bithynicus in Asia Minor). Recently Kovblyuk (2005, Figs. 1 View FIGURE 1 : 1–3 and 3: 1– 3) re-established its taxonomic status and described the male of the species from Crimea. Kovblyuk commented on the similarity of Z. olympi with Z. talpinus ( L. Koch, 1872) , a well known species of Central Europe, but also pointed to the differences of the two species: “…males of Z. olympi differ from Z. talpinus by the bifid terminal apophysis (one tip in Z. talpinus ) and other details of the bulbus, while females differ by almost straight and parallel epyginal margins (not S-shaped) in the anterior half” (p. 2–5, translation from Russian kindly provided by Yuri Marusik). The type of Z. talpinus was examined by the author and differences were also identified in both the terminal apophysis tip (see outlined structure B in Figs 32 and 34 View FIGURES 31 – 34 ) and the shape of the anterior dorsal sclerite (see outlined structure A in Figs. 31–33 View FIGURES 31 – 34 ). A female of Z. talpinus was not available to the author. Interestingly a male and female from Bulgaria identified as Z. talpinus were found identical to another couple from Crimea identified as Z. olympi . The presence of Z. talpinus in Bulgaria has been re-confirmed by the cross checking of other specimens from Pirin Mt. (1 ɗ, 1 Ψ) and Rila Mt. (1 Ψ) (col. C. Deltshev, pers. com.).

The type locality of Z. olympi was misinterpreted by Bosmans & Chatzaki (2005) as belonging to the Greek mountain Olympus in Thessalia. Hence the species is not known to occur in Greece, at least not to our present knowledge. 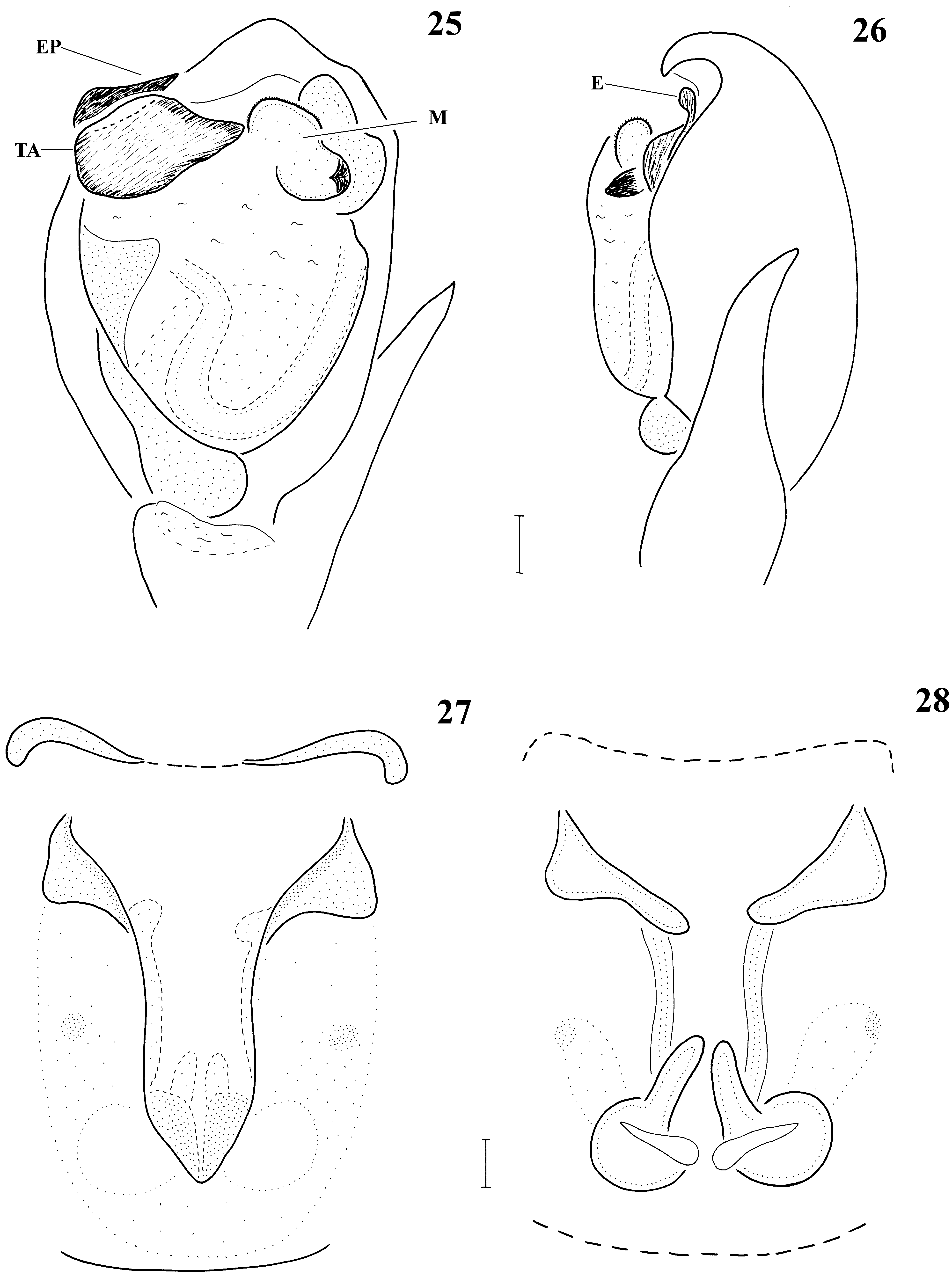 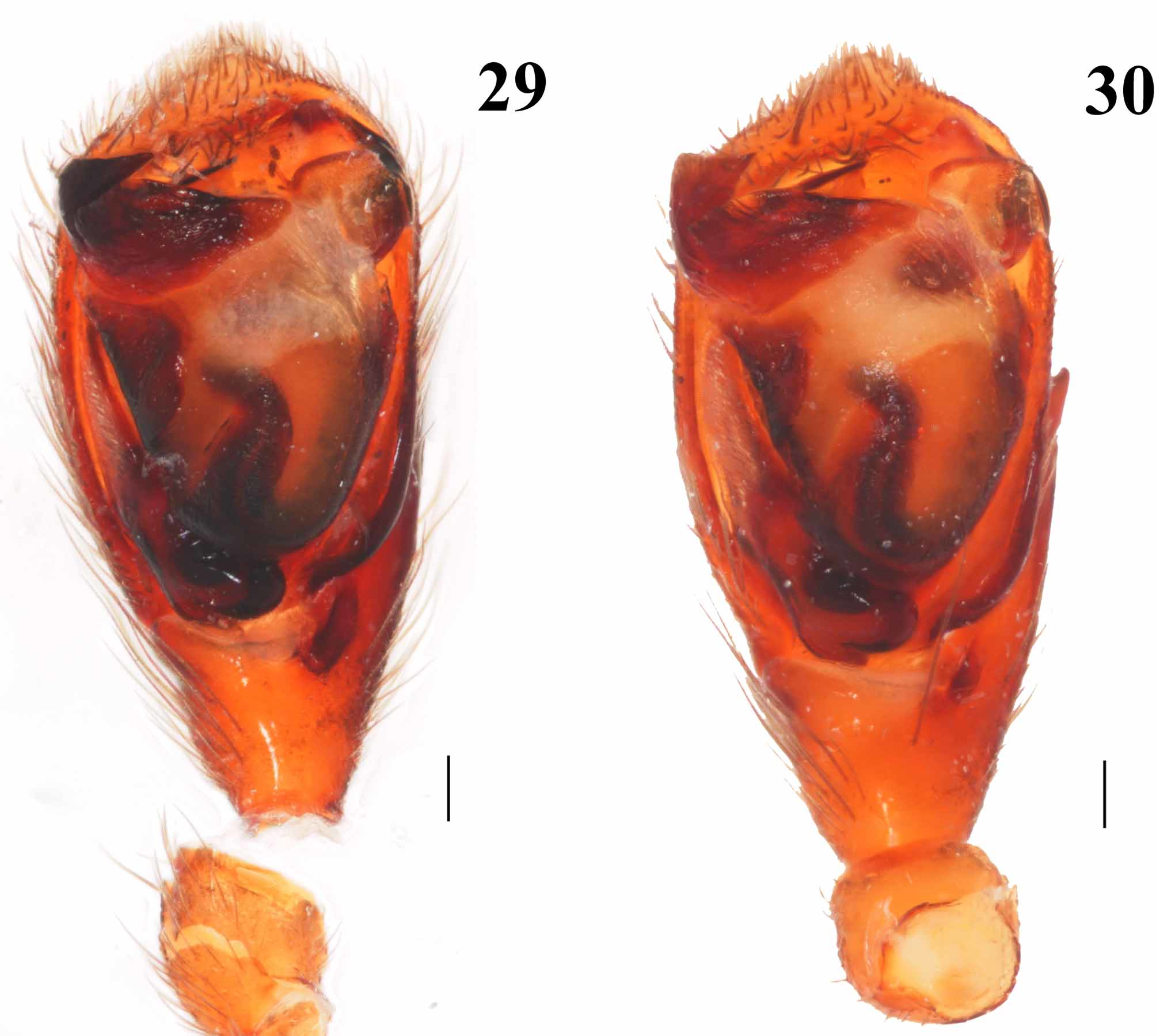 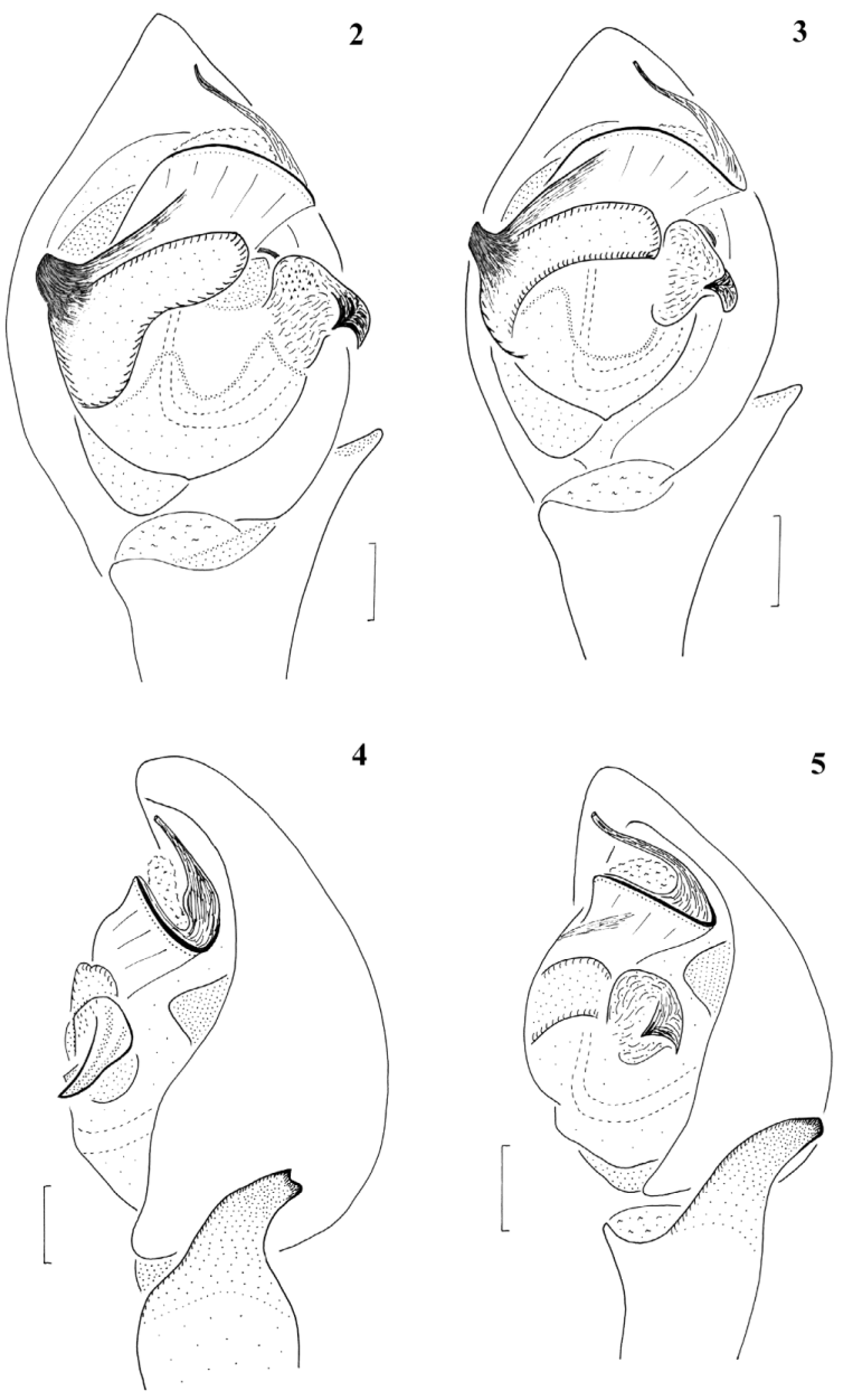 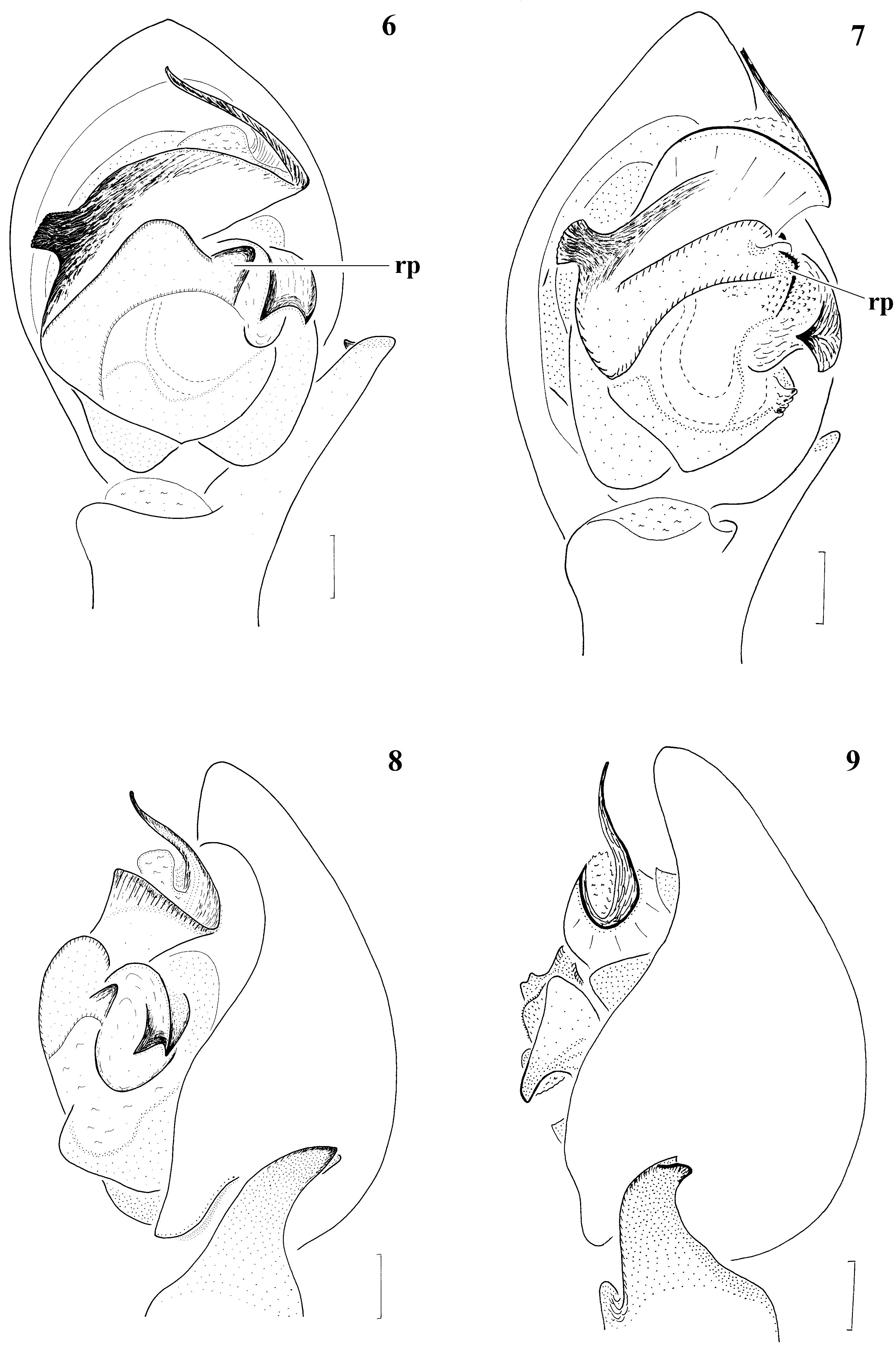 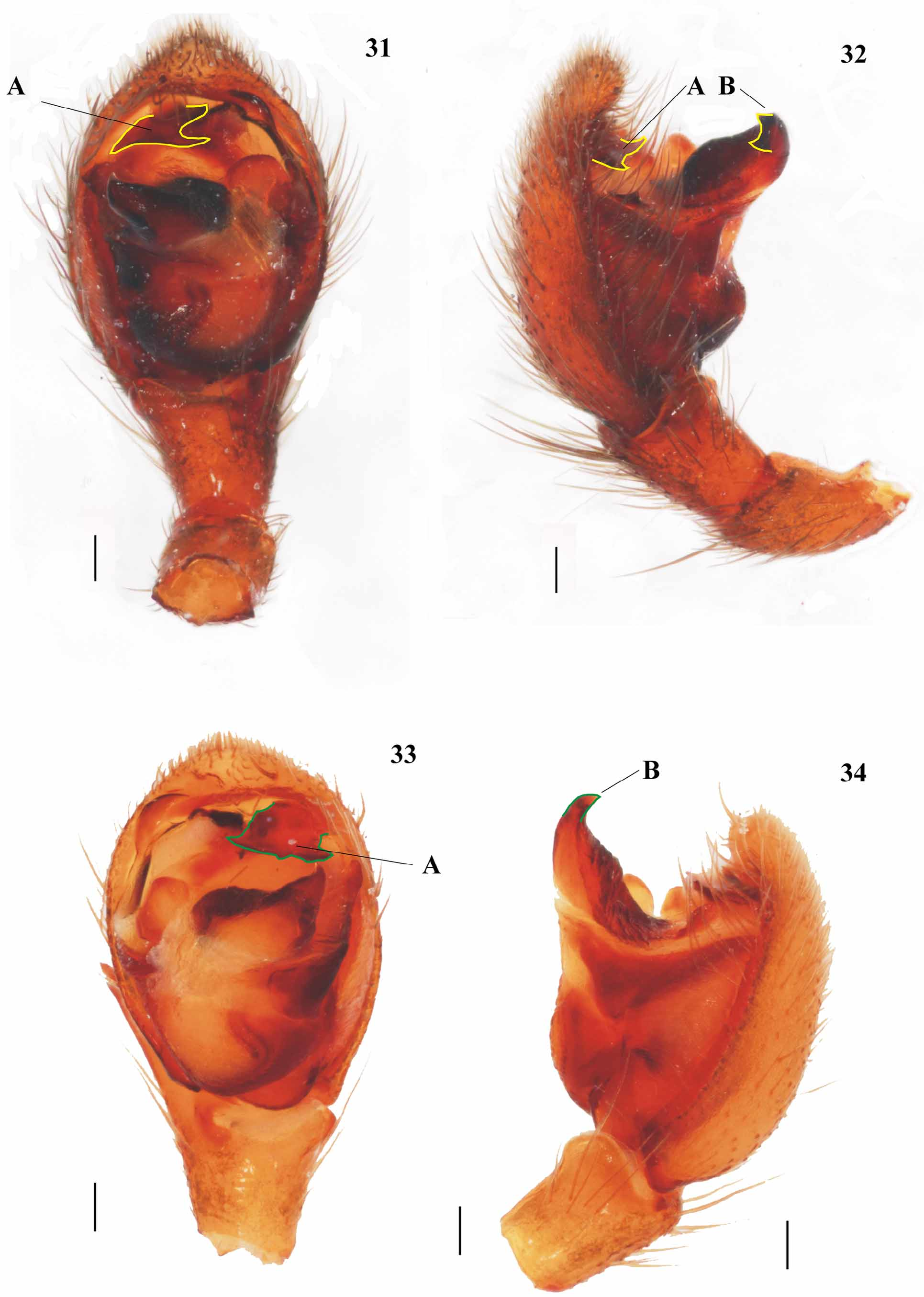