Endoantennal conglobation ability. Tergites smooth, with very small scale setae, which are arranged irregularly, except for a row along the posterior margins. Cephalothorax with frontal shield only slightly exceeding the vertex. Behind frontal shield a transverse furrow, the ends of which curved backwards and visible near the eyes. Eyes composed of approximately 11–15 ommatidia. Coxal plates 1 and 2 with schisma, coxal plate 3 with distinct lobe on inner face. Coxal plates 6 and 7 and pleon-epimera 3–5 and uropod sympodites with a continuous ridge on their inner face, running parallel with the margin. Marsupium with 3/ 3/3/3 cotyledons. Only a few large eggs; in one specimen, eight eggs were counted.

First antenna three-jointed, with very short second article. Apical article longer than proximal article, with (c.) 11 aesthetascs arranged irregularly on the distal half. Distalmost aesthetascs of same size as the others, exceeded by a tip of soft appearance. Second antennae short, when bent backwards not reaching the hind margin of first tergite. Apical cone slightly longer than distal flagellar article, with only one small lateral sensillum. Distal flagellar article with two rows of four (?) aesthetascs.

Mandibles both with pars incisiva of four cusps, one hairy seta between hairy lobe and pars molaris, which is represented by a tuft of numerous hairy setae. Left lacinia mobilis large, with two large and one smaller cusps, left hairy lobe with two hairy setae. Right lacinia mobilis smaller, with two more acute cusps, right hairy lobe with one hairy seta. Both mandibles on outer surface densely covered with scales, and with some scale setae. First maxilla mesal endite with two slender, equal penicils, and laterodistal corner rounded. Lateral endite on distal margin with mesal group of six more slender tooth setae, of which two are simple, one bifurcate and three trifurcate (in the specimen examined), and lateral group of five stouter, simple tooth setae, one of them half as long as smallest of the remaining four, and one slender seta. No small subapical setae could be found (in the drawing of the frontal view of the first maxilla, there is one large tooth seta of the outer group missing, which has broken off). Lateral margin fringed with hairs in the distal third. Second maxilla apically bilobate, the lateral lobe more than twice as large as the mesal lobe. Lateral lobe hairy, mesal lobe also with area of numerous densely spaced sensilla. Maxilliped palp three-jointed, on basal article with one large seta, second article with one broad and one slender seta on the lateral margin and a proximal tuft of four small setae and a distal tuft of numerous small setae on a long socket; two small setae beside the socket. Apical article with apical tuft of numerous (> 20) small setae, and some (four?) small setae on the lateral margin. Maxilliped endite with approximately parallel sides, and rounded corners one small seta near mesal corner and one smaller seta near lateral corner, on caudal face otherwise hairy (scales). Frontal face of endite with dense field of hair-like scales. A penicil could not be seen in the examined specimen, but may be broken off or hidden between the scales. Maxilliped base with scales and scale setae.

Pereiopods covered with somewhat protruding scales. Pereiopod 1 with antenna brush composed of rather long scales. Merus and carpus of male pereiopod 1 distinctly enlarged in comparison to female. Except for the antenna brush, no further scale-fields can be seen on any pereiopod (without dissection). Male pereiopod 2 with some scales arranged like a rudimentary antenna brush on the carpus, and a very small ventral scale-field on the merus. Following pereiopods without any special scale-fields. Male pereiopod 7 with distinct water-conducting scale-row on base only. Ischium with slightly concave ventral margin, otherwise ischium and merus simple. Dactyli with numerous scales, a dactylar seta with a fringe of setules in the distal portion, an ungual seta and a smaller seta beside the ungual seta.

Pleopod exopodites 1 and 2 with respiratory fields, which are covered with fringed, oval scales. Male pleopod 1 exopodite with large, broadly rounded distal lobe; marginal setae absent. Respiratory fields with shallow radial wrinkles. Endopodite 1 rather broad on the basal two-thirds of the spermatic furrow, then evenly constricted towards the pointed apex. Row of 36 slender spine-like setae along the spermatic furrow straight. These setae longer than distances between their insertions on most of the length of the row. Male pleopod 2 exopodite distally extended to a long lobe, but distinctly shorter than the slender endopodite. Exopodite with distinct respiratory field with almost semicircular lateral margin, and a hairy field along the medial margin. Exopodite 3 with distinctly delimited dorsolateral fields, and exopodites 4 and 5 with less distinctly delimited fields, none of which shows any wrinkles. Male pleopod 5 exopodite with furrow on the ventral face, along the mesal margin, and a transverse field of very small pectinate scales which could be seen only at higher magnification (400×). None of the pleopod exopodites has any marginal setae.

Pleotelson rounded-triangular. Uropod sympodites angular, about three times as wide as the exopodites. Sympodites with a small group of gland pores near the insertion of the exopodites (could not be seen in the dissected uropods).

Brazil, Carasinho (two ♂, two ♀, leg. Dr A. Borelli). The specimens could not be located. According to Vilela et al. (1971), there is no locality named ‘Carasinho’ in Brazil, but the name is probably derived from ‘Caranda’, which is a species of Arecaceae ( Copernicia sp. ) grown on plantations in Mato Grosso.

As the type specimens were not available for reexamination, the ascription of the above-mentioned specimens to Circoniscus bezzii is somewhat tentative. The specimens identified by Schultz (1995) more probably belong to C. incisus , because, according to the description, they have ‘notches’ on coxal plates 1 and 2. 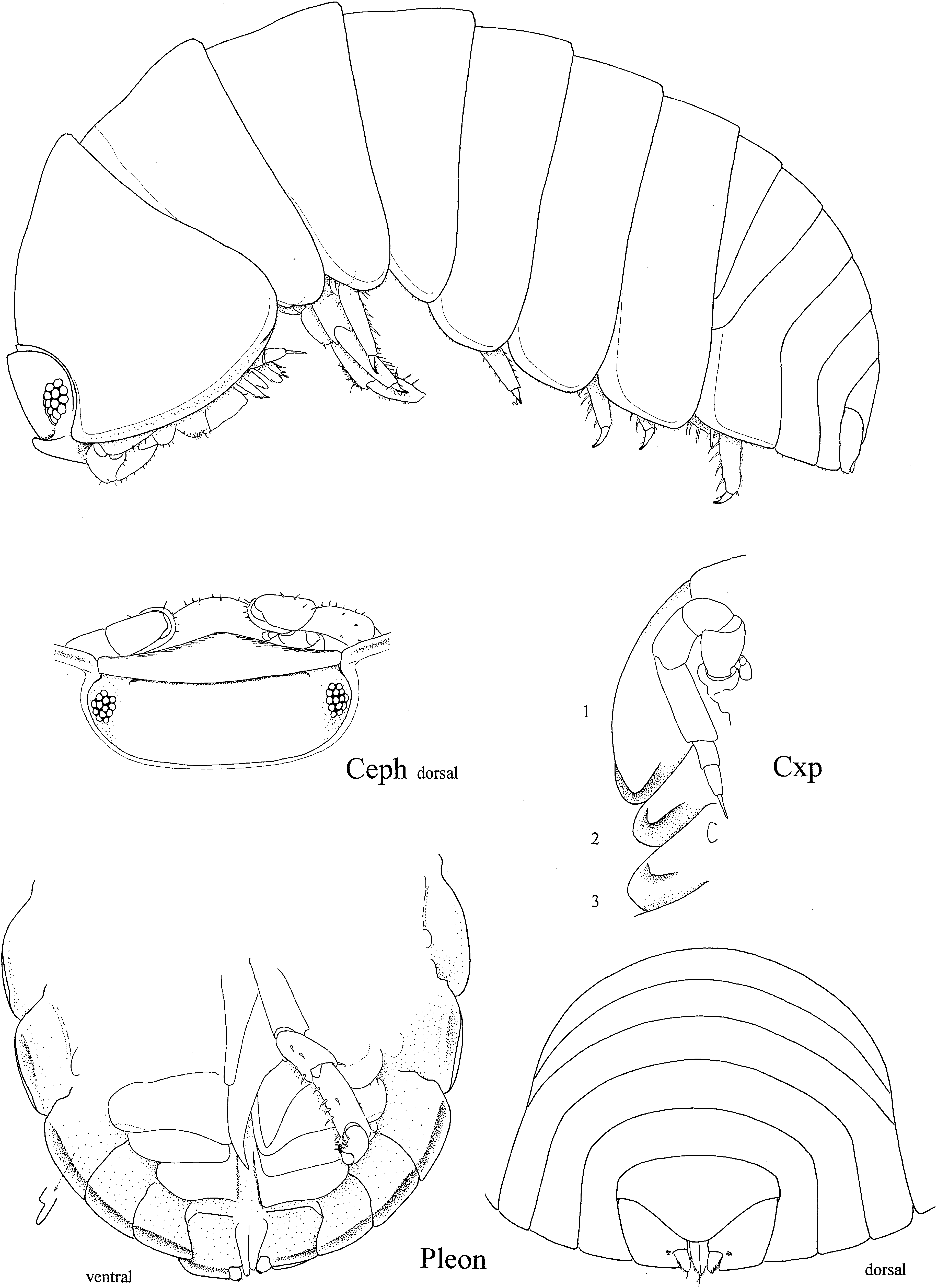 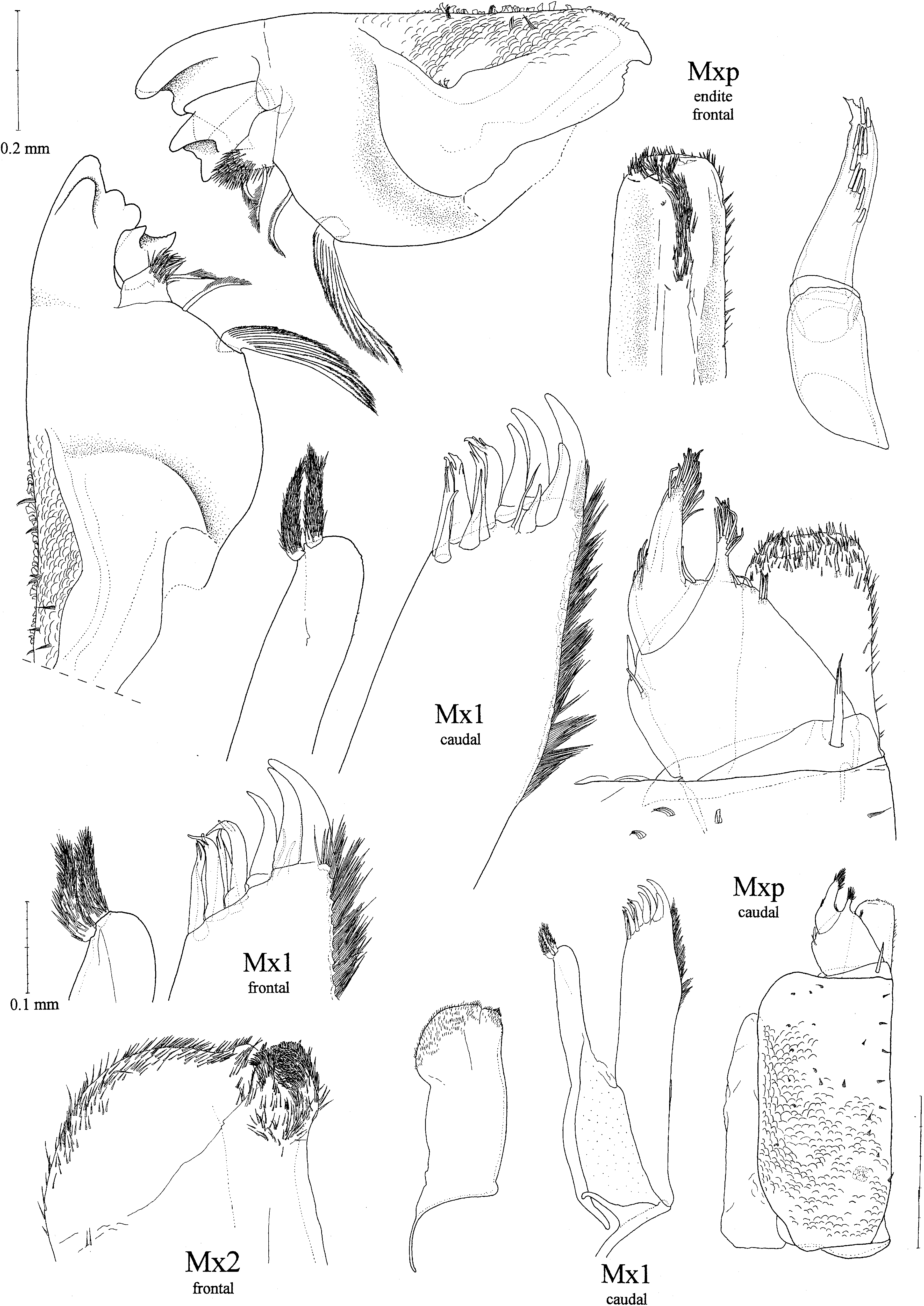 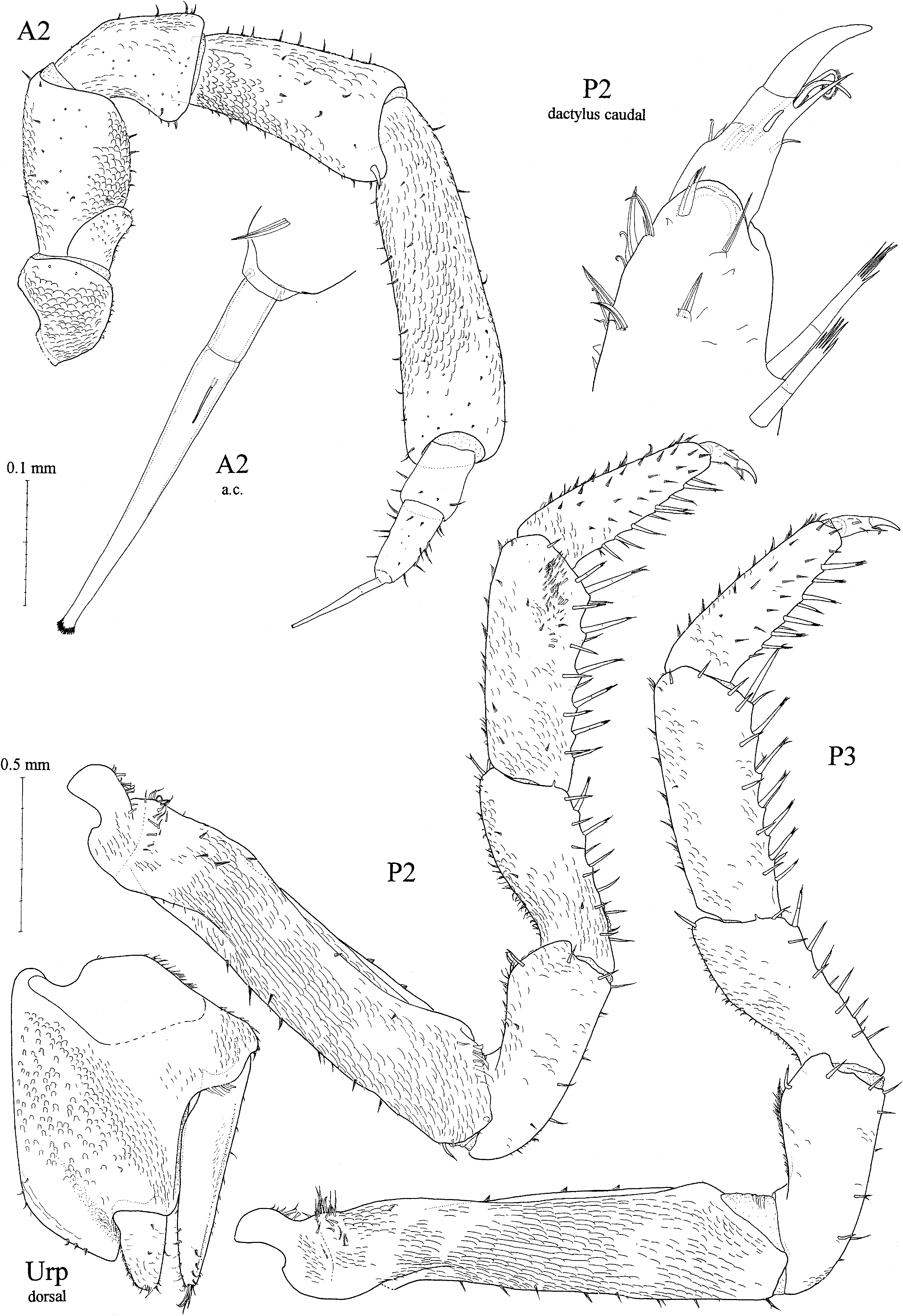 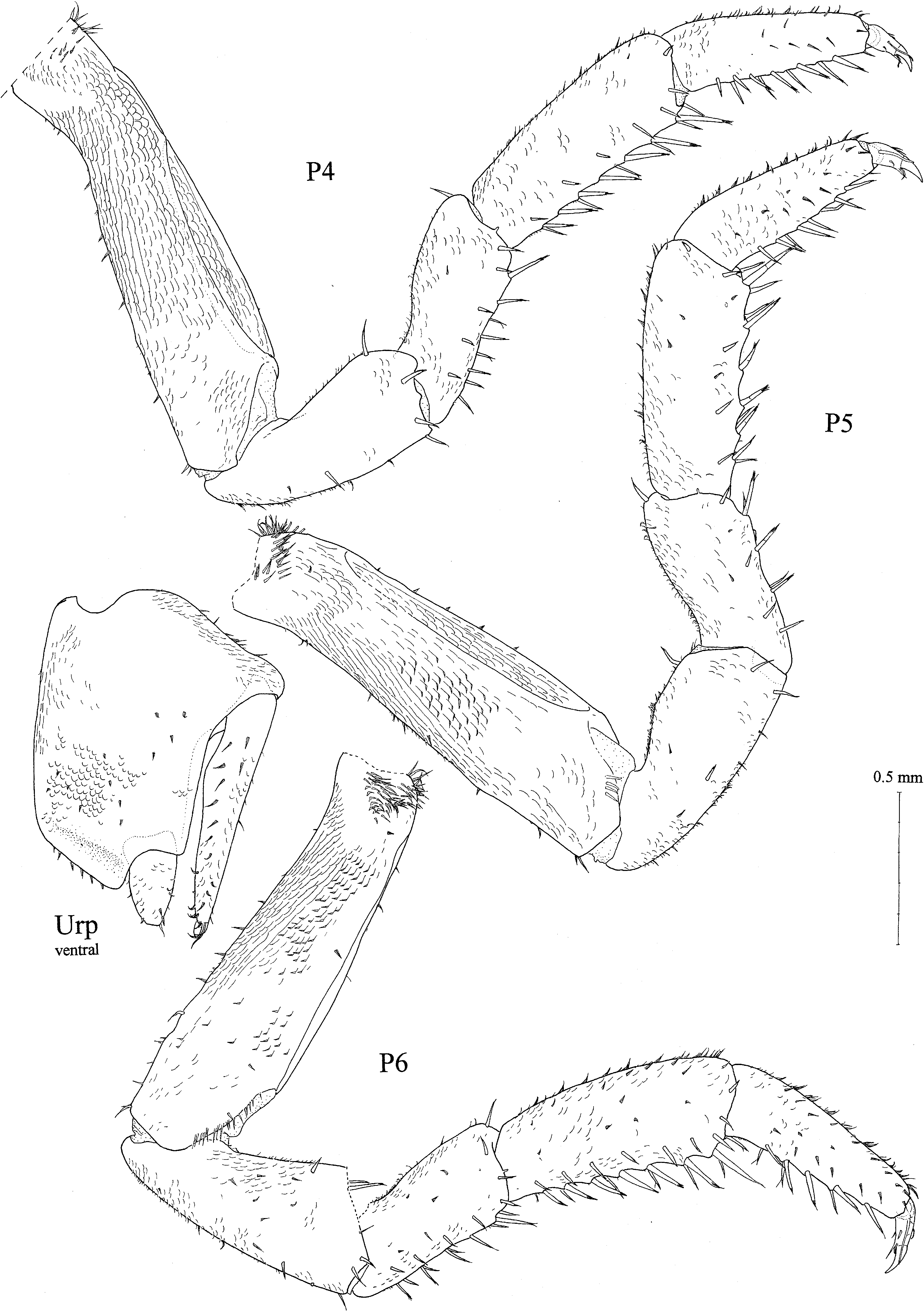 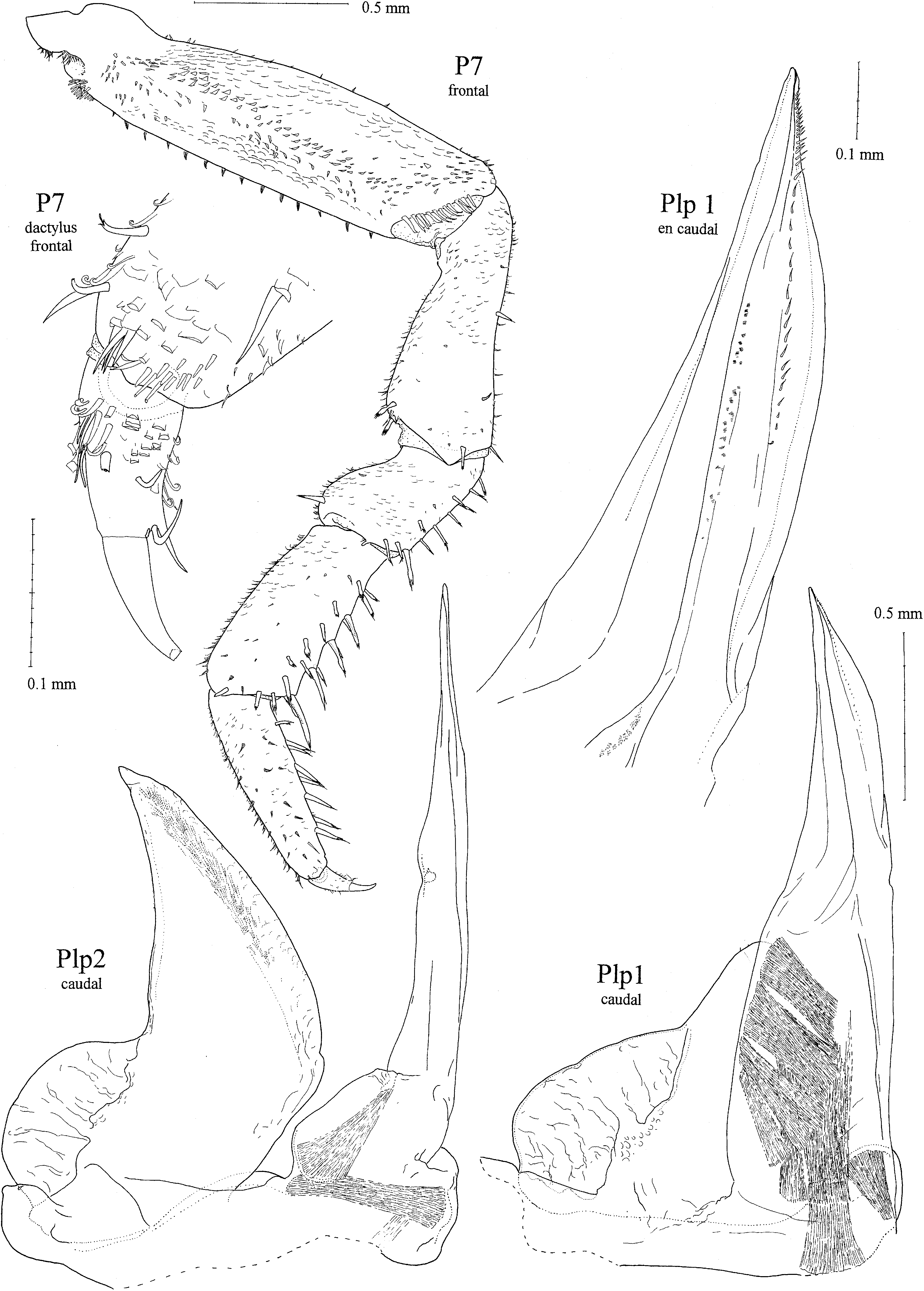 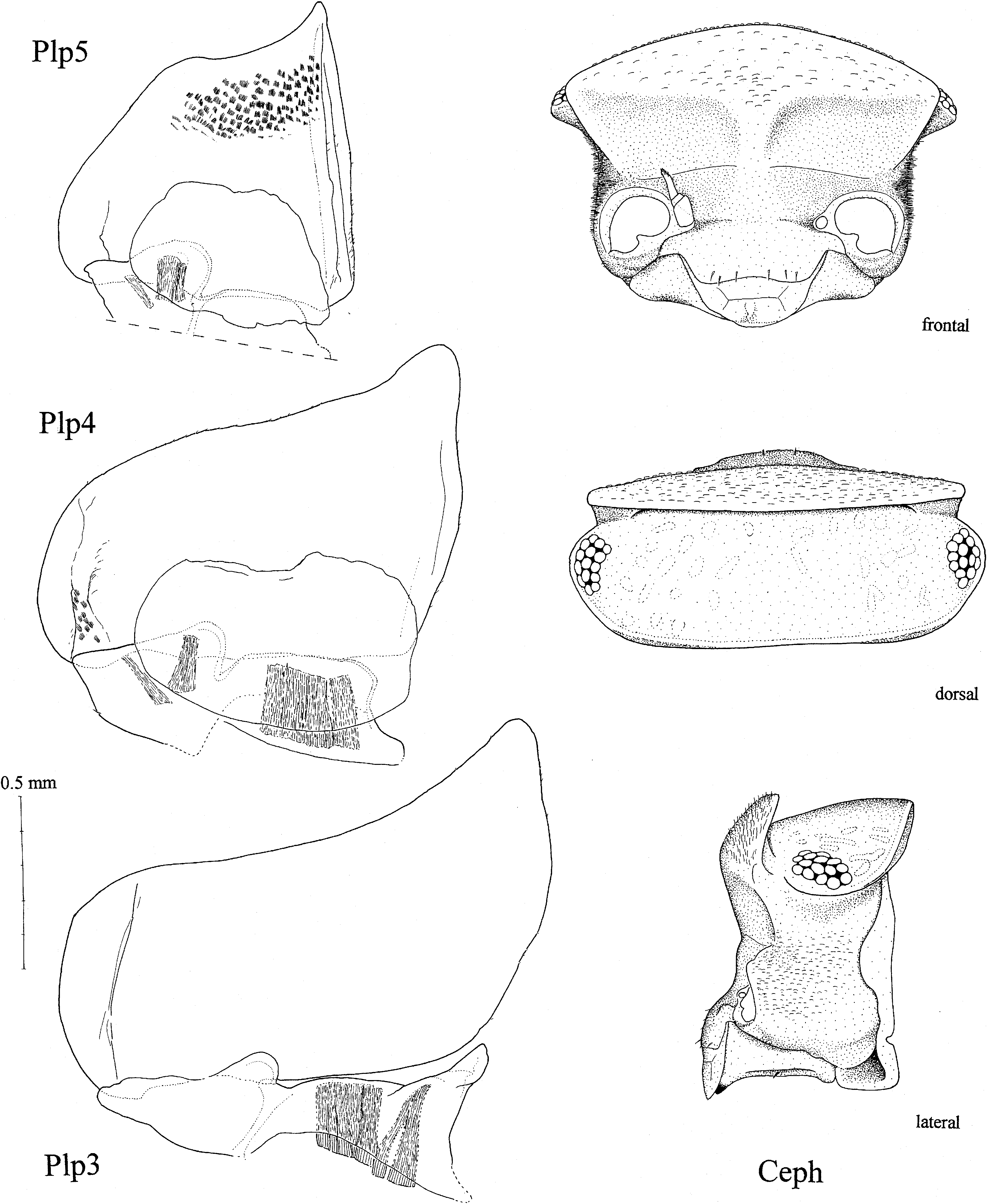 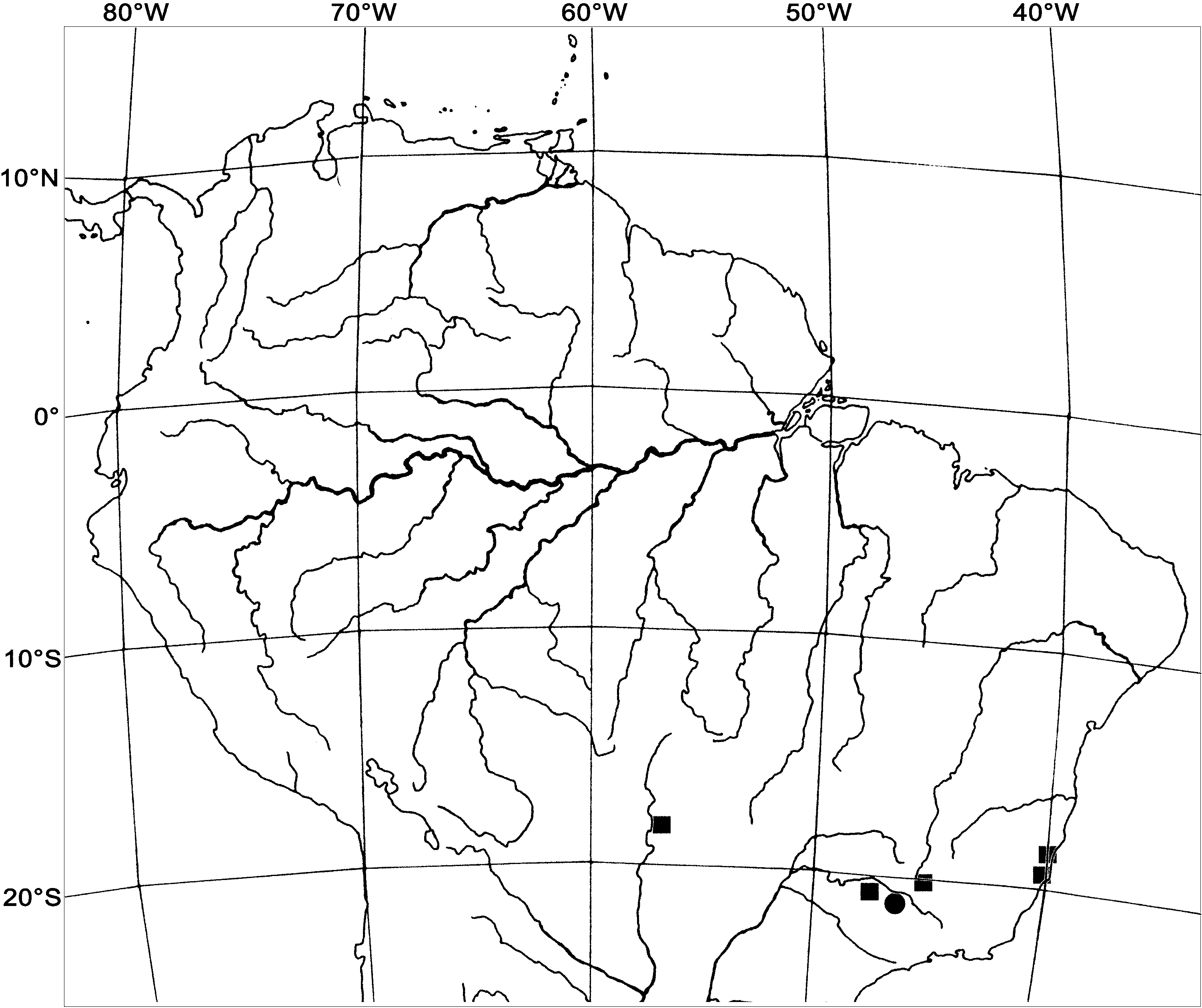