Diagnosis. Distinguished from P. rimatara  by the characters mentioned in the diagnosis for that species.

Prothorax slightly longer than wide, the greatest width at about 1/4 of pronotal length. Lateral margins almost straight and moderately parallel, slightly converging behind widest point until strongly rounded posterior angles, weakly crenulate with shallow and very narrow marginal sulcus adjacent to narrow, raised border. Both specimens exhibit an extremely slight but noticeable sinuation to side margins at about, or just behind, middle. Anterior angles obtuse angulate and distinctly produced by sinuation of anterior marginal border. Anterior margin almost straight in middle 3/4 and unbordered until it joins the lateral margins. Posterior angles strongly rounded with small denticles interrupting. Posterior margin very weakly lobed and evenly rounded, completely margined by sulcus, a continuation of the lateral sulcus. A pair of narrow, shallow, fovae in basal sulcus which is evenly rounded between. Basal border narrow, not obviously punctate.

Prosternum moderately punctate with punctures usually separated by their length or more. Anterior edge with weakly developed margin that extends only across middle third and a very weak sulcus, a distinct row of small punctures. Apex of prosternal process truncate to very broadly rounded, the latter potentially a preservational artefact of the paratype.

Etymology. This species is named for friend and colleague Mat Prebble who was instrumental in the initial discovery of the existence of the wonderful fossil records from the Austral archipelago and who collected (with Porch) the sedimentary material from which the specimens described here were recovered.

Description of male head considered to belong to P. prebblei  : width in front of eyes about equal to temporal width, distinctly parallel immediately in front of eyes for half of eye length. Frontal margins concavely bisinuate and narrowed (at approx. 40o angle) to anterior margin, itself distinctly concave with right margin further produced than left. Shallow depression of coalescing punctures on each side of frons, and (barely) in front of eyes. Head shining with punctures separated by several times their diameter, less abundant adjacent to and anterior of, eye. Eye moderately coarsely facetted, about 7–10 ommatidia in length along lateral margin, dorsally, and similar size ventrally. Male with setose pit on submentum.

Distribution. Like Pycnomerus rimatara  , known only from Rimatara  and likely to be a Rimatara  endemic. Similarly, considered potentially extinct: material known from other Austral Archipelago islands (Tubuai, Raivavae and Rapa) and nearby Cook Islands (Mangaia and Atiu) represent different taxa.

Habitus reconstructions. Given that we have what we consider to be the principal sclerites of both Rimataran Pycnomerus  species described here, we have reconstructed the suggested habitus of each using size matched sclerites ( Figure 6View FIGURE 6). For P. rimatara  this involved the use of a single right elytron image (specimen from C1T2 100–105cm), reflected for reproduction as a left elytron, and the articulated head and prothorax of the holotype. For P. prebblei  this necessitated the use of three isolated sclerites, the holotype prothorax, an unassociated head, and unassociated, articulated elytra. The reconstructions give our best estimate of the habitus of the two newly described species. 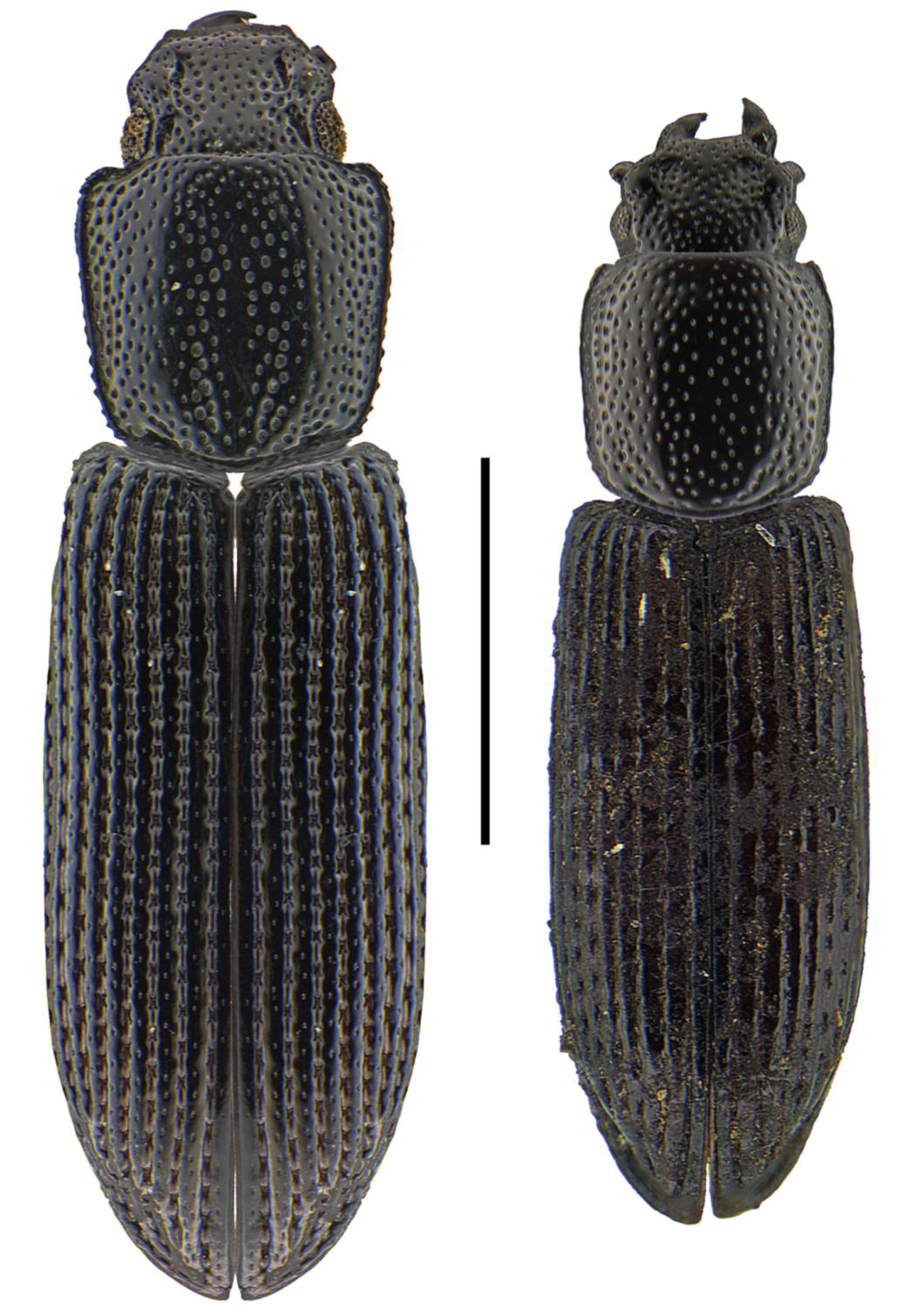