Diagnosis. A species of Aenigmachanna   as evidenced by the complete absence of a lateral line, an elongate eel-like body, a long-based dorsal fin nearly three-quarters of standard length, and a long-based anal fin, greater than half of standard length, with over 40 rays. Aenigmachanna mahabali   can be distinguished from the only other known species in the genus by possessing fewer rays in the dorsal fin (53 vs 56–57), fewer scales in a lateral series (76 vs 83–85), a shorter head (18.5% SL vs 20.7–21.6% SL), a longer upper jaw (64.5% HL vs 60.0–60.8% HL), a smaller eye (9.8% HL vs 12.7–13.3% HL), and in having the pectoral-fin rays extending as filaments well beyond the margin of the fin membrane.

The head is moderately long (18.5% SL), widest (51.3% HL) approximately midway, and deepest (53.4% HL) at the nape. The snout (22.7% HL) is broad and blunt. The eyes are small (9.8% HL) and situated dorsolaterally in the anterior third of the head. The mouth is large (64.5% HL), with fleshy lips, and the length of the maxilla is more than twice the distance from the tip of the snout to the posterior margin of the eye. Both upper and lower jaws exhibit multiple rows of minute, pointed teeth. There are 10 prominent caniniform teeth arranged in a single row on the vomer and there is a single row of smaller teeth on the palatines. Cephalic sensory pores are single, without satellite openings, and consists of 2 nasal pores, 7 circumorbital pores, 2 frontal pores, 4 preopercular pores, 2 extrascapular pores, 1 pterotic pore, 1 posttemporal pore, 4 dentary and 1 anguloarticular pores ( Fig. 3 View FIGURE 3 ). There are 10 gill rakers on the lower limb of the first gill arch. There are no scales in the gular region or on the ventral side of the lower jaw. The scales in the postorbital region anterior to the nape are deeply embedded in the skin.

Colouration. In life: The body is uniformly reddish-brown, with the colouration of the ventral surface anterior to the anal-fin origin fading to cream. The scales on the cheek exhibit reflective silvery regions surrounding areas of dark pigment, while those on the operculum are almost entirely silvery. Scales on the body are pigmented basally to about a third of the scale length, with clear distal margins, presenting the appearance of a row of spots along the side. The fins are hyaline, with faint spots on the dorsal-fin membrane and a spot at the base of each dorsal-fin ray.

In preservative: The body is predominantly brown, darker brown dorsally. The ventral side of the head, the chest and belly are cream with spots of darker pigment, especially along the ventral mid-line. The scales exhibit pigmented bases and unpigmented distal regions. The fins are hyaline.

Distribution. The species is known from a single location, a well in Peringara, near Thiruvalla in Pathanamthitta district, Kerala, India ( Fig. 7 View FIGURE 7 ). When the fish was found, at the height of summer, the water surface in the well was at a depth of about 5 metres below the ground surface. The specimen came to light when the water in the well, normally clear, suddenly turned muddy and the well was drained to facilitate cleaning. Peringara is situated in a large natural wetland that abuts the Kuttanad lowlands, ‘the rice bowl’ of Kerala.

Etymology. In the mythology of Kerala, Mahabali was a king who conquered the three realms and was banished to the netherworld by Vamana, an avatar of Vishnu. He is, however, allowed to return to the mortal realm once a year, which is celebrated in the festival of Onam. Treated as a noun in apposition. FIGURE 4. Close up of the posterior end of the dorsal fin of Aenigmachanna mahabali, holotype, ICAR-NBFGR/CHAPMAH.1, 127mm SL, illustrating secondary-branching of rays. The large arrow points to the entire anterior branch of a ray, the small arrows point to the secondary bifurcation of the posterior branch. 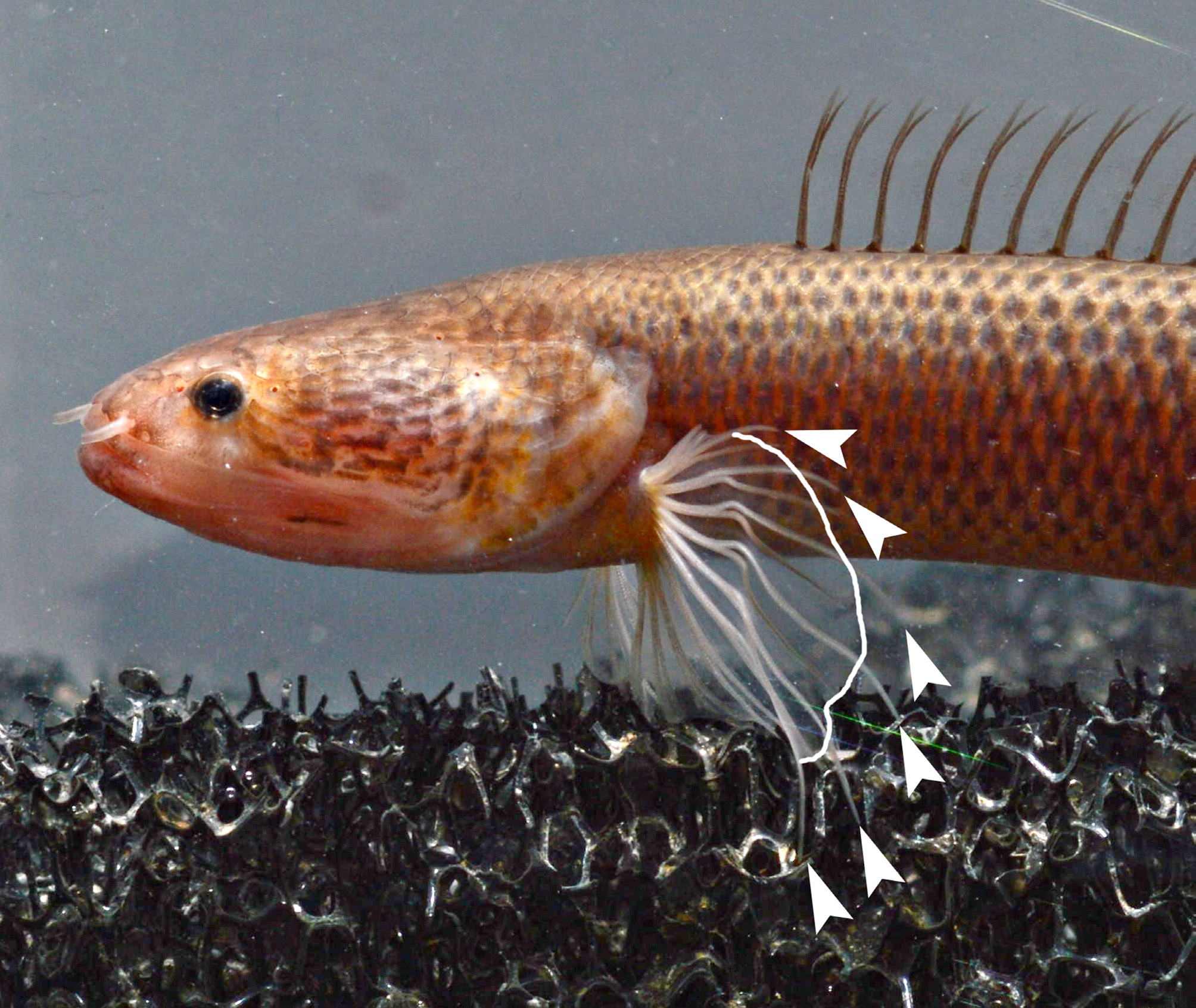 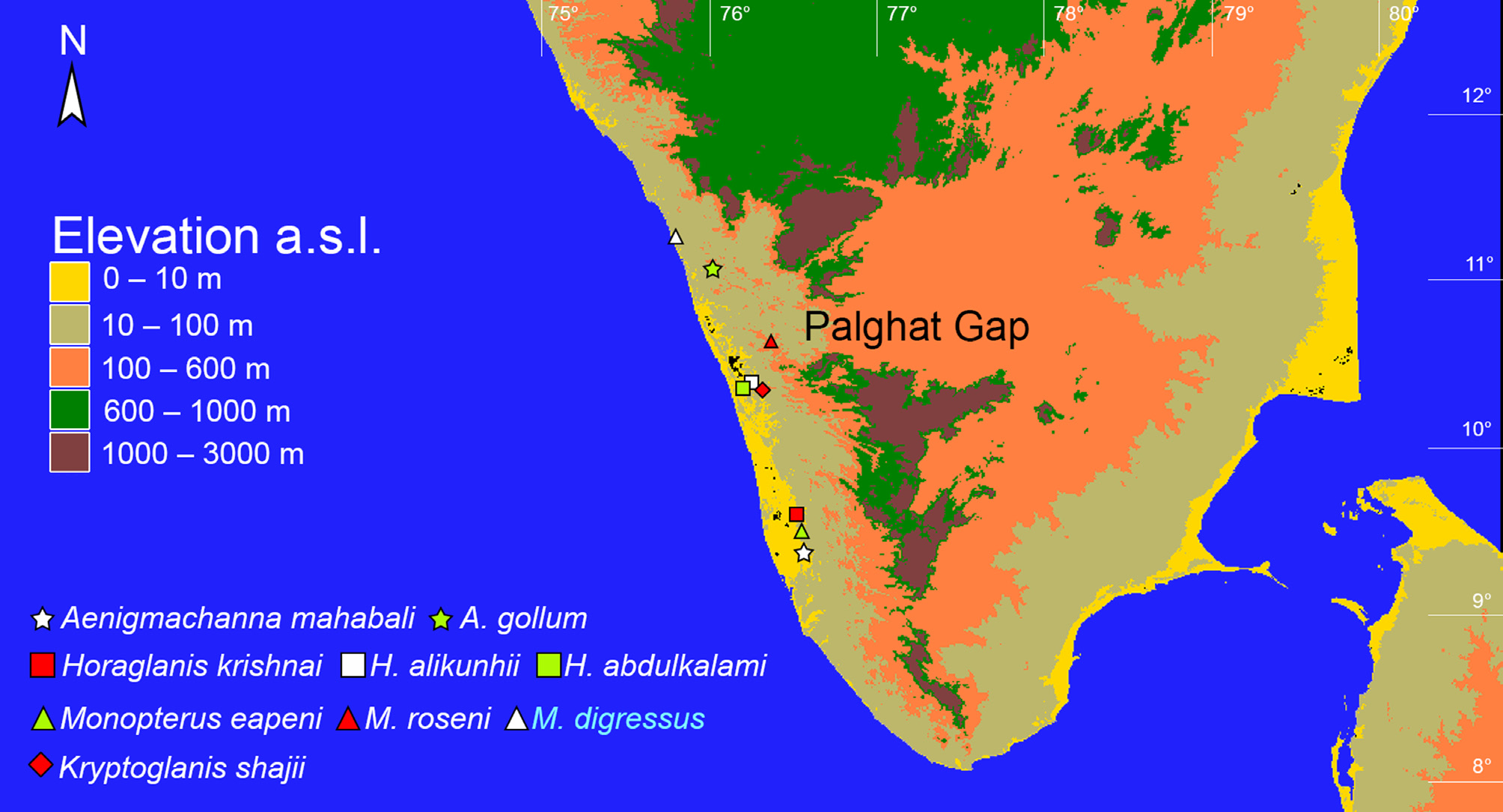 FIGURE 7. Map illustrating type locality of Aenigmachanna mahabali as well that of other species of troglobytic fishes from Kerala, India.