Diagnosis. A large Microgecko (to at least 43.8 mm SVL) characterized by flattened head, body and tail, five scales bordering the nostril, internasal (supranasal) scales in contact with nostril and separated from each other, two pairs of postmentals, 76–84 scales around midbody, 144–156 ventral scales from the postmental to vent, 75–86 scales along dorsal midline from axilla to groin and six precloacal pores in adult male.

Description of holotype. An adult female with a regenerated tail ( Fig. 2A,B View FIGURE 2 ); neck distinct; scales of top and sides of head slightly elevated, juxtaposed, smooth, somewhat irregular in size, those of loreal region larger than those on upper sides of head and occiput ( Fig. 2C View FIGURE 2 ), 30 across head in interorbital area counting the ciliary scales, 6 scales exclusively on interorbital bone; rostral pentagonal, wider than high with distinct median furrow, its width slightly less than twice its height; nostril between rostral, first supralabial and three nasals, area behind the nasals depressed; infranasal in contact with first supralabial; internasals (supranasals) differentiated from the surrounding scales, in contact with nostrils, separated from each other by a scale; post-supranasals smaller than internasals, separated by a pair of scales; pupil vertical, edges serrate; ear opening smaller than pupil; 11 supralabials, the first 6 anterior to eye, 7 th supralabial in contact with granules surrounding the eyes, the rest below the orbit small, the last one barely differentiated from the adjacent scales ( Fig. 4A View FIGURE 4 ); 8 infralabials, decreasing in size posteriorly; scales on snout almost equal, larger than those on back of head; mental somewhat triangular, with round rear edge; one pair of well-developed postmentals, a smaller second pair could be differentiated, the first pair separated in midline by mental as well as by four gular scales; first pair of postmentals about half the size of mental, in contact with first infralabial; the second, smaller postmental pair less than half the size of the first pair, not in contact with infralabials ( Figs. 2D View FIGURE 2 , 5B View FIGURE 5 ); 72 gulars, flat, juxtaposed, hexagonal to polygonal, smaller than dorsals, ventral and upper head scales, not uniform in size, those on throat region are larger and subimbricate.

Scales on dorsum somewhat rhomboid to irregular in shape, smooth, subimbricate, 50 across middorsum, smaller than ventrals, 78 in midline between axilla and groin, laterals little smaller than middorsals; ventrals smooth, imbricate, rhomboid, those on abdominal region are larger than those on throat, 32 across midbelly, 156 from behind the apex of mental to anterior margin of cloaca; scales of limbs and tail subimbricate, arranged more or less in rows or annuli, those on limbs similar to dorsals; adpressed forelimb reaches between eyes and snout, adpressed hindlimbs not reaching to axilla; digits angularly bent between three distal phalanges and proximal portion of the digits; subdigital lamellae under fingers and toes smooth, keel-like structures between ultimate and antepenultimate phalanges appeared as a result of desiccation of this specimen ( Fig. 4E View FIGURE 4 ); 14 subdigital lamellae on 4 th finger, 12 under 1 st toe, 17 under 3 rd toe and 19 under 4 th toe, terminal portion of toes compressed; the regenerated tail covered above and below by smooth, rhomboid, flat, slightly imbricate scales, distinctly larger than those of dorsum and about equal in size to the ventrals, arranged in regular transverse series; precloacal region slightly damaged, six enlarged scales anterior to vent midway between insertion of limbs; tail length 35 mm, of which more than 90% is regenerated.

Coloration. Live specimens have saffron yellow color above, ventral surfaces dusty to cream; a chocolatecolored band from snout through eye, ears and meeting with a nuchal band; a short brownish bar on occiput; three transverse bands on dorsum between axilla and groin, the interspace between them about more than two times the width of narrow bands, another fairly small brownish spot midway between insertion of hindlimbs. Body coloration and pattern of the three paratypes ( Fig. 3 View FIGURE 3 : PMNH 3695 View Materials , 4024 View Materials & 4025) almost exactly as the holotype.

Etymology: The species is named after the region where the holotype was collected: Tanishpa village in the valley of the same name, Torghar Mts., Killa Saifulla District, Balochistan Province, Pakistan, by adding the Latin “-ensis” meaning ‘from’ or ‘belonging to’.

Habitat and ecology: The type locality, Tanishpa, is a small village situated in the Torghar Mountains (meaning “Black Mountains”) in the Toba Kakar Range, a southern offshoot of the Himalayas, ca. 60 km from the border with Afghanistan ( Fig. 1 View FIGURE 1 ). The Torghar Mountains are very rugged semi-arid sandstone ridges with an average elevation of 2400 m and is approximately 90 km long and vary from 15 to 30 km in width. This region is characterized by having dry temperate ecology, with sparse vegetation ( Fig. 6 View FIGURE 6 ). The climate of the area is dry, with cold winters (an average mean temperature of 4°C) and warm summers (an average mean temperature 26 °C). Heavy snow often falls in winter and violent thunderstorms and dust storms occur in summer. The area receives very little precipitation with a recorded annual total between 180 mm and 270 mm (Planning and Development Department of Government of Balochistan, 2011). Occasional drought cycles are experienced which severely affect the flora and fauna of the region ( Raja 2000). Shrub-steppe plant communities dominate the semi-desert landscape of the Torghar Hills. Bunchgrasses, forbs, Ephedra sp., Artemisia sp., and other shrubs occur on the upland slopes. Cargana ambigua and Tamarix sp. grows in low lying areas and streambeds where water is available. Trees are scarce, yet wild olive ( Olea europea cuspidata ), juniper ( Juniperus excels ), wild pistachio ( Pistacia khinjuk ), almond ( Prunus brahuica ) and ash ( Fraxinus xanthoxyloides ) are scattered across the lower slopes, and orchards are cultivated where water is sufficiently available. Overgrazing of the valleys has led to the establishment of xerophytic scrub vegetation dominated by Acacia , Artemisia, Haloxylon , and Rosa species ( Frisina et al. 1998, 2002). Mammals including Capra falconeri megaceros , Ovis orientalis cycloceros, Canis lupus, Otocolobus manul, Felis silvestris ornata, Hyaena hyaena , Vulpes vulpes, Martes foina, and number of small species, such as Ochotona rufescens and Ellobius fuscocapillus and over 78 bird species have been reported from the area. The area is rich in reptiles, including the endemic taxa Laudakia melanura nasiri and Cyrtopodion rhodocauda . Other recorded species recorded in the vicinity of the type locality were: Testudo horsfieldii , Cyrtopodion watsoni , Hemidactylus persicus , Phrynocephalus scutellatus, Ablepharus pannonicus, Eremias persica , Laudakia microlepis , Trapelus agilis, Platyceps rhodorachis, Psammophis schokari, Ptyas mucosa, Macrovipera lebetina obtusa, and Pseudocerastes persicus ( Woodford et al. 2004) .

All specimens were collected soon after dusk at about 20h00, suggesting that the species is possibly nocturnal as other species of the genus Microgecko . Specimens were caught away from the human settlements in open landscape along the dry streambed on large sandstones in the months of March and September revealing that the species activities may at least extend over this period. Such large sandstones are used by these geckos as shelter against adverse environmental conditions during periods of inactivity or hibernation. During collection, the specimens moved on the ground or climbed with great agility. Collection of only four specimens during 40 days of survey in 2017 and 2018 suggests that this is a rare, or at least rarely encountered, species. The type locality is characterized by herbaceous cover and occasional shrubs and wild olive trees.

Comparison with other species of Microgecko : Microgecko tanishpaensis sp. nov. superficially resembles M. depressus but differs from it in the following characters: larger size, five scales in contact with nostril including first supralabial, rostral and three nasals (versus four in M. depressus including first supralabial, rostral and two nasals; Fig. 5A View FIGURE 5 ), supranasals and postsupranasals differentiated from the surrounding scales (versus not differentiated); supranasal in contact with nostril (versus not in contact; Fig. 5A View FIGURE 5 ), separated from each other by a scale (versus in contact), rostral pentagonal (versus quadarangular), six supralabials anterior to eye, the rest below the orbit but separated from the eye by granules (versus 4 to 5), 10–11 supralabials (versus 8–10), 144–156 GVA (versus 129–139), 76–84 scales around midbody (versus 74–76), two pairs of postmentals (versus absent or one small pair; Fig. 5B View FIGURE 5 ), three dark brown transverse bands on the back (versus 3–5), five transverse bands on tail (versus 6) and six precloacal pores in males (versus 2–5).

Microgecko h. helenae Nikolsky and M. h. fasciatus Schmidtler & Schmidtler, both very distantly distributed in Iran, can be easily differentiated from M. tanishpaensis sp. nov. by the following combination of characters: 5–8 supralabials (versus 10–11), three supralabials reach the front edge of orbit (versus 6), one pair of postmentals (versus 2), supranasals and postsupranasals in contact or partly separated (versus always separated in M. tanishpaensis sp. nov.), 11–15 subdigital lamellae on 4 th toe (versus 17–19), 101–126 GVA (versus 144–156), 60–75 scales across midbody (versus 76–84), none or 5–7 dorsal crossbars on back edged with white color in the rear (versus 3 crossbars with no white edges) and none or 7–12 crossbars on tail (versus 5). 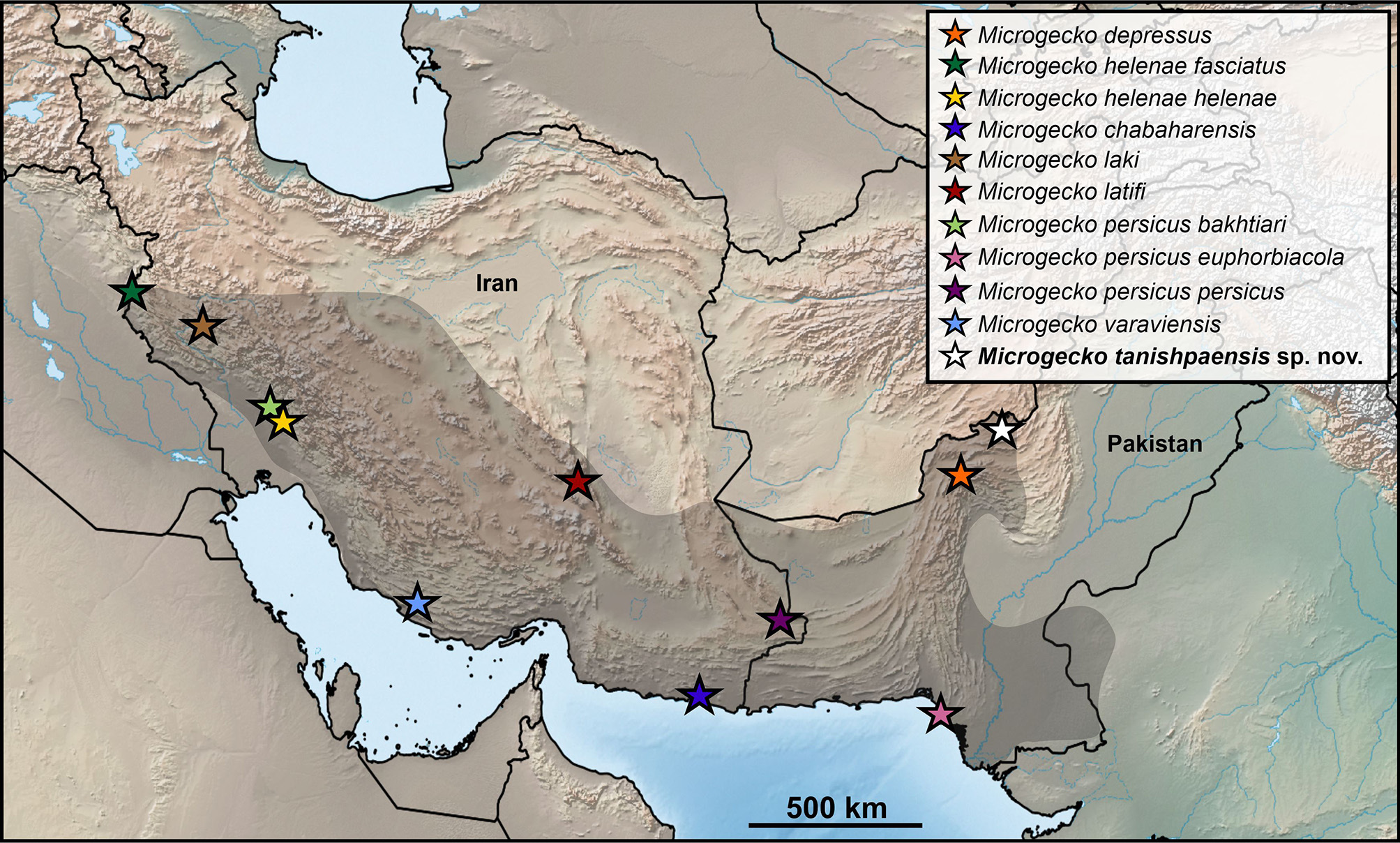 FIGURE 1. Type localities of all known species and subspecies of Microgecko including Microgecko tanishpaensis sp. nov. The distribution range of the genus is highlighted in light black. FIGURE 5. Details of anterior head scalation: (A) dorsal (left) and ventral (right) view of head of holotype (AMNH 93003) of Microgecko depressus reproduced from Minton et al. (1970: 347); internasal and postinternasal not differentiated from adjacent scales, internasals in contact with each other and separated from the nostril, three scales border the nostril on both sides, note a single very small pair of postmentals separated by two scales, (B) dorsal (left) and ventral (right) view of head of holotype (PMNH 4023) of Microgecko tanishpaensis sp. nov.; the internasals (also known as supranasals) shown by yellow square 3 and postsupranasals are large, differentiated from adjacent scales, supranasals separated from each other by a scale and in contact with nostril of their sides, 5 scales border nostril, two pairs of postmental shields, the first pair larger, separated from each other by 4 gular scales, the second pair about less than half of the first pair, (C) dorsal (left) and ventral (right) view of head of paratype 4024; size and pattern of scales same as that of holotype PMNH 4023, two pairs of postmentals, the first pair barely in contact, the second pair almost about half the size of first pair. Light red = rostral, blue = first supralabial, bright yellow = nasals, green = nostril, pink = postsupranasal, orange = scales separating internasal (supranasal) and postsupranasal scales, white = postmentals, green = infralabials, grey = mental, cyan square = scale separating first pair of postmental from the infralabial. FIGURE 6. The habitat at the of type locality of M. tanishpaensis sp. nov.