As mentioned above, Myrmica ravasinii  belongs to the schencki  species-group, female castes of which have antennal scape strongly angled at the base and with vertical lobe or dent; the lobe or dent always forms shield-like plate along the short (vertical) surface of scape; additionally, anterior clypeal margin widely rounded and notched medially. Males have short scape (ratio of the head length / scape length <0.50) ( Radchenko 1994 a, b, Seifert 2003, Radchenko et al. 2006, Radchenko & Elmes 2010).

Although it can be quite difficult to discriminate between some Myrmica  species (see keys in Radchenko & Elmes 2010) since many of them show considerable variation in their important diagnostic characters, M. ravasinii  is one of the most distinctive species that practically cannot be confused with any other member of this genus either from the Euro-Caucasian region or worldwide. Its workers have the narrowest frons among all known Myrmica  species (ratio of frons width / head width <0.19, mean 0.17 ± 0.015). Such narrow frons biomechanically seems to be a result of development of the extraordinarily enlarged lobe at the scape bent, which is also the biggest among all known Myrmica  species ( Figs 1-3View Figs 1 – 7). These features appear to be quite stable morphologically over the species range.

Males of M. ravasinii  most resemble those of M. caucasicola Arnoldi, 1934  particularly by the presence of very long semi-erect to erect hairs on the middle and hind tibiae ( Figs 4, 6View Figs 1 – 7) (where they are known, the males of all other species of this group have short subdecumbent pilosity on the hind tibia). Formerly Radchenko et al. (2006) could not separate M. ravasinii  and M. caucasicola  in their key for males and placed them in the same couplet. After re-investigation of the corresponding material, we have found that they can be separated by the length of second funicular segment: it is ca. twice longer than the third one in M. ravasinii  , and not more than 1.5 times longer than the third one in M. caucasicola  ( Figs 5, 7View Figs 1 – 7).

collected by one of the co-author of this paper

(YuK) using pitfall traps in four localities in the

Agosti & Collingwood (1987) and Seifert (1988) reported M. ravasinii  from “Yugoslavia” (“S Yugoslavia” in Seifert 1988) without giving a specific locality. Later these data were simply repeated without any additional information or corrections by many subsequent authors ( Arakelyan 1989, Petrov & Collingwood 1992, Radchenko 1994 b, 2013; Radchenko et al. 2006, Radchenko & Elmes 2010). Similarly, Borowiec & Salata (2012) have recorded it from Serbia and Montenegro, and Borowiec (2014) recorded it from Serbia.

Because of the absence of concrete locality data and not seeing the corresponding material the presence of M. ravasinii  in former Yugoslavian countries has never been confirmed. Consequently it is not recorded in the latest check-lists from Croatia ( Bračko 2006), Slovenia ( Bračko 2007), Montenegro ( Karaman 2004, 2011, Petrov 2008), Macedonia ( Karaman 2009, Bračko et al. 2014) and Bosnia and Herzegovina ( Vesnić 2011). Moreover, the finding of this species in “Yugoslavia” (more correctly – in Serbia and Montenegro) was not confirmed in the more recent publications of Petrov (2000, 2006).

All the above authors are well experienced myrmecologists, who in our opinion are highly unlikely to miss or misidentify M. ravasinii  if they had it in their own hands. Until more details of Agosti & Collingwood’s old record of M. ravasinii  for “Yugoslavia” are found, we might suppose that their material either was mislabelled, or probably that they found it perhaps in Macedonia. Anyway, the presence of this species in the former Yugoslavian countries needs confirmation. Note also that M. ravasinii  has not been found in countries adjacent to Turkey, i.e. in Bulgaria (Lapeva-Gjonova et al. 2010) or in Iran ( Paknia et al. 2008, 2010), although we think it probably lives there.

Thus, M. ravasinii  seems to be Balkan-Caucasian species distributed from Albania through Greece, Turkey and Transcaucasia until North Caucasus, and it area lays between ca. 37- 44o N and 20-44o E ( Fig. 8View Fig. 8).

The ecological characteristics of the North Cau-

casian localities of M. ravasinii  are:

1) North Ossetia-Alania, Tsejsky gorge: the relatively sparse pine ( Pinus sosnowskyi  ) forest on a steep scree slope (the steepness of about 45o) at an altitude 1895 m a.s.l. and ca. 200 m over the bottom of the gorge. Besides pine trees in this forest are growing birch and rowan trees, in the undergrowth grow raspberries, in the grass cover dominate moss, bilberries and cowberries.

4) South Ossetia, vicinity of Tskhinval: the oak ( Quercus robur  ) forest, planted in 1940th at an altitude 830 m a.s.l. The average height of trees is 20 m, and crown density is about 90%. The herbage is very sparse (the projective cover is less than 15%) and includes sporadic fescue, Dorycnium  sp., cyclamen, and Solomon’s Seal ( Polygonatum  ).

Based on both our own, literature and collections’ data it could be argued that M. ravasinii  is generally a semi-xerophilous species, but it seems to be quite tolerant to various types of habitats. Although the regions where it distribut- ed are very hot in summer, it lives in mountains at altitudes between 800 and 2150 m a.s.l. where temperature is significantly lower than in plains. Here M. ravasinii  inhabits predominantly various types of fairly open forests (oak, pine, hornbeam, abies  ), but avoids both more cool and wet beech forests, and more hot and dry archa (Juniper) forests. In drier woods it is often associated with the edges of small gullies where the sub-soil may be a little moist. At the same time, it was also found on subalpine meadows. Nests are built in the soil, often under stones. In southwest Turkey sexuals were found in nests on 18ht and 20th of August, but to the north, in Armenia, they were found on 30th of August ( Arakelyan 1989, Seifert 2003, Radchenko et al. 2006, Radchenko & Elmes 2010, Elmes, personal communication 2015, Radchenko, unpublished data). 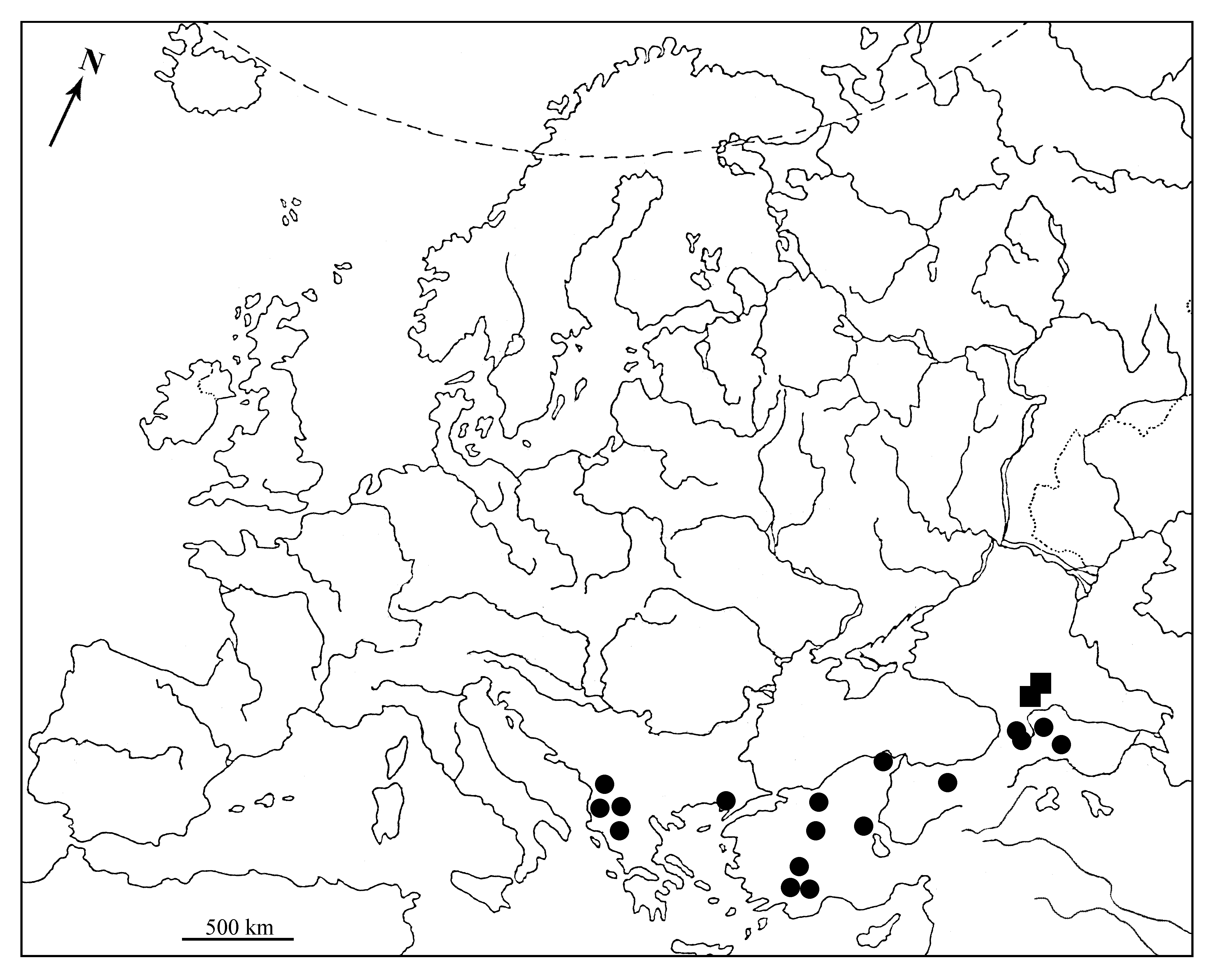