Nunes, Rudy Camilo & Bellini, Bruno Cavalcante, 2019, A new species of Nothobrya Arlé, 1961 (Collembola: Entomobryidae) from Brazil and notes on key characters for Nothobryinae taxonomy, with an identification key to the species of the subfamily, Zootaxa 4615 (2), pp. 375-391: 379-386

Diagnosis. Antennae with 4–5 antennomeres. Labial basolateral field with chaetae a4–5 as spiny-like mic. Head’s ventral groove with 4–5 surrounding ciliated chaetae of different sizes. Tergal S-chaetotaxy, from Th. II to Abd. V as 2,2|1,6,6, 14,4 for sens, and 1,0|1,0,1,0,0 for ms. MTO with 7–13 spine-like chaetae. Ungues internally with 2 paired teeth at≅the base, both equally sized, plus 1 median and 1 apical tooth; and with 1 outer unpaired tooth. Collophore anterior side with 7 ciliated chaetae plus 3 distal mac; posterior face with 3–4 smooth chaetae (1 unpaired at midline, plus 2+2 or 3+3 paired). Tenaculum with 2–3 smooth chaetae in the corpus. Manubrial plate with 4 ciliated chaetae and 2 pseudopores.

Etymology. The word “sertaneja” refers to “sertão”, a popular term used to define vast countryside lands, especially the great depressions of northeastern Brazil. “Sertão” landscapes mostly present semiarid climates and are covered by dry forests of deciduous vegetation where the new species was found. “Sertão” also is a common word to Caatinga biome, which is equivalent to Australian “outback”. Thus “sertaneja” is a person or thing (gender feminine) from “sertão”.

Distribution and habitat. The new species was found at Serra da Capivara National Park and vicinities, in the Caatinga biome, Piauí State, Northeast Brazil ( Fig. 27View FIGURE 27), a complex mosaic of phytophysionomies formed by deciduous vegetation highly adapted to the semiarid weather. According to the Köppen-Geiger system, the climate of the area is “BShw”—Semiarid with a long dry season and rainy summer, characterized by high temperatures during almost all year and irregular precipitations. The annual average temperature is 25ºC, with maximum temperature reaching 35ºC and minimum 12ºC. Annual average rainfall is 650 mm, but can vary from 0 mm to 1.100 mm in the driest and rainiest years recorded, respectively. Highest levels of precipitation occur during January to March. The region has an annual potential evapotranspiration of about 1.400 mm according to the Thornthwaite’s methodology ( Rodet 1997; Barros et al. 2012).

All specimens were collected from soil and leaf litter samples, in two distinct localities with different soil properties, locally known as “Baixão das Andorinhas” and “Toca de Cima do Pilão”. “Baixão das Andorinhas” is a canyon formed by erosion of red sandstones commonly seen in “Serra da Capivara” plateau, and the superior borders of the canyon (where the samples were collected) are covered by a typical savanna-like vegetation, populated by native grasses and sparsely distributed small trees and shrubs. The soil is shallow and sandy, with low water retention capacity, and receives high levels of insolation during all the year. “Toca de Cima do Pilão” is covered by limestone formations surrounded by sandstones. The samples were collected in the top of the karst, which is predominantly covered by Cactaceae  and Bromeliaceae  , with sparse semideciduous and latifoliate trees.

Detailed data on dorsal chaetotaxy is lacking for N. schubarti  and part of N. arlei  , so for now the most reliable elements to compare Nothobrya species concern other features as compared previously and shown in Table 1. Silveira & Mendonça (2016) presented a detailed scheme of macrochaetotaxy to N. arlei  trunk, but such chaetae were not labelled and apparently some elements on lateral terga, plus pseudopores and polymorphisms were omitted. We believe the unusual position of the lateral bothriotrichum on Abd. III of N. arlei was related to a detached chaeta, since abdominal bothriotricha in Nothobrya sertaneja sp. nov. have small alveoli hard to track down, quite similar to those of microchaetae. 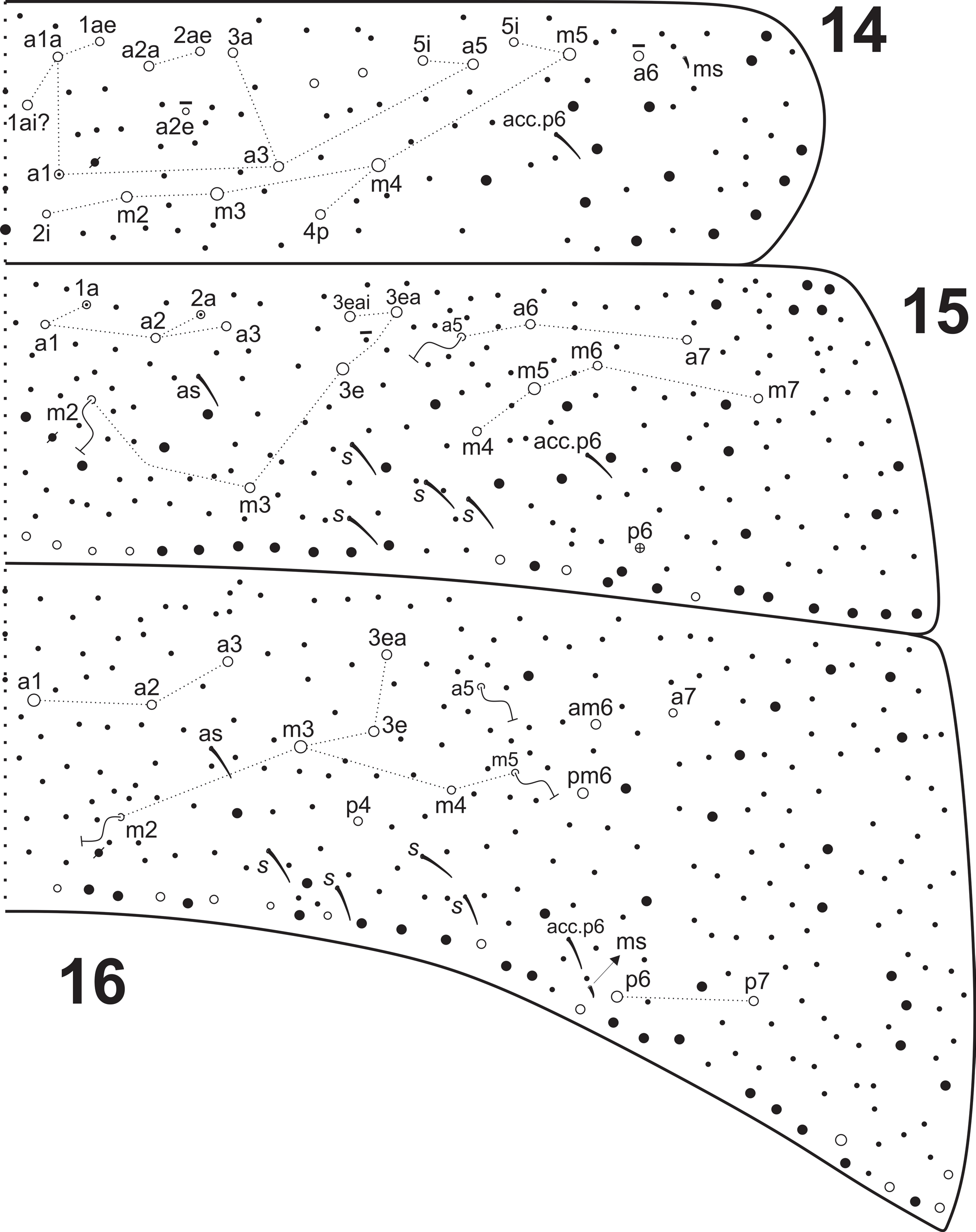