Diagnosis. This species can be distinguished from all other nitens  group species by the abundance and length of basigastral costulae. In S. convexiceps  the basigastral costulae are longer (extending beyond the basal third of tergite vs. limited to the basal fifth of tergite) and more abundant (> 30 in vs. <20). This species is most closely related to S. zemi  , but is distinguished by mandibular tooth count of 8–9 vs. 7 in S. zemi  , pilosity (adpressed setae on clypeal dorsum and antennal scape in in S. zemi  and adpressed in S. convexiceps  , and shape of basal three mandibular teeth (spiniform in S. zemi  and triangular in S. convexiceps  ). Strumigenys convexiceps  is distinguished from S. hubbewatyorum  , S. nitens  and S. caiman  in having shorter relative scapes (SI = 47–49 vs. 56–74); and relatively broad petiole (3.0–3.1 times wider vs. <1.3 times wider than long).

Worker description. Adapted from the description of Pyramica convexiceps in Bolton (2000)  . Mandibles in full face view and at full closure triangular, evenly and strongly convex in profile beyond the anterior clypeal margin; MI 23–24. Mandibles with 6 enlarged teeth basally + 2–3 denticles apically for a tooth count of 8–9. The mandibles with a small basal triangular tooth followed by two larger triangular teeth that do not meet, or barely meet when mandibles are closed. Tooth four, five, and six are spiniform with tooth five being the longest and followed by two to three smaller crowded denticles at the apex. The basal tooth is much smaller than teeth two and three. If a third denticle is present, it is located just apical of tooth six and is much smaller than following two denticles.

Antennal scapes with simple adpressed pilosity directed toward the apex. Clypeal dorsum with sparse, minute, simple adpressed setae directed anteriorly toward midline of head. Dorsum of head with weakly flattened short adpressed setae that are as long, or slightly longer than the space that separates them at their bases. Frontal triangle and area directly posterior to the frontal triangle smooth and shining and bearing minute simple to slightly expanded adpressed setae smaller than those on posterior dorsum of head. Scrobal margins with at least one pair of laterally projecting simple to slightly expanded setae in apicoscrobal positions. Vertex of head with 1–2 pairs of similar erect setae and posterior margin with 2–3 pairs of similar erect setae.

First gastral tergite with numerous fine basal costulae that extend further than 1/3 the length of the sclerite. Erect setae on gaster present and similar to those on mesonotum as two to four rows in four columns (see taxonomic notes).

Distribution and ecology. Known from only two collections from the island of Cuba. The conditions under which the syntype specimens were collected are unknown, but Playa de Marianao has the climate of a typical subtropical dry forest, with a pronounced dry season from November to April ( Bulto et al. 2006). The non-type specimens were collected via Winkler sifting in low elevation coastal pine forest on the extreme eastern side of the island. This area of the island has no pronounced dry season and is subject to continuous precipitation throughout the year.

Taxonomic notes. Bolton (2000) does not provide morphological measurements for S. convexiceps  and provides only the MI provided by Santschi (1931) in his original description. We examined images and estimated measurements of a syntype specimen on antweb.org in order to compare it with other members of the nitens  group and our non-type S. convexiceps  specimens. We found that the syntype differed from the non-type specimens in the following characters: the syntype lacked apparent anterior erect setae along the scrobal margin, and only bears rows of erect setae on the anterior and posterior margins of first gastral tergite. Because erect setae are easily abraded and otherwise the holotype matches the non-type workers examined here, we consider non-type and type specimens are representative of S. convexiceps  . 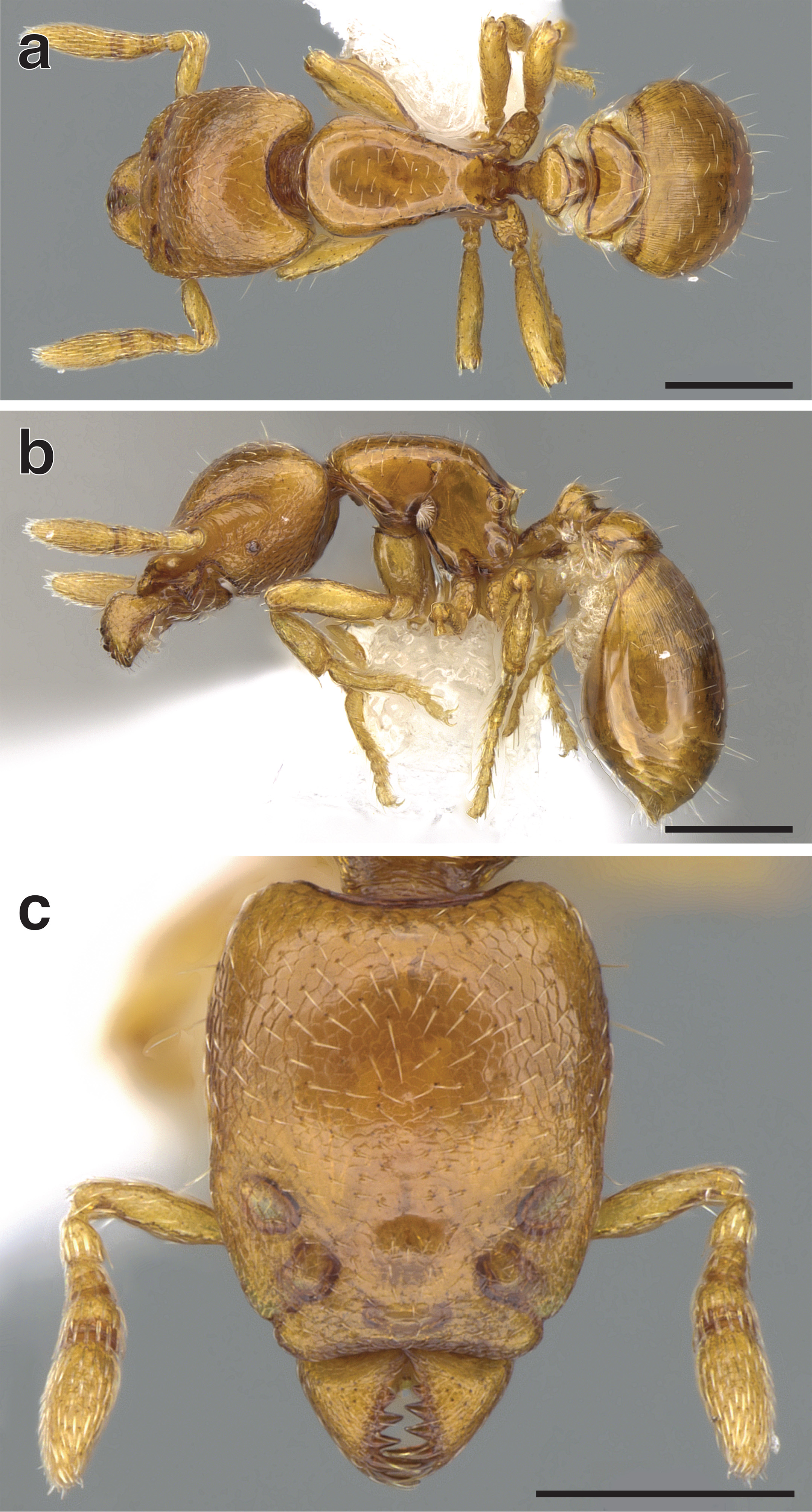