DISTRIBUTION: Troglorhopalurus lacrau  is endemic to Brazil, and known from only two populations, in the states of Bahía and Ceará (fig. 9A). All except two specimens were collected from two connected caves, Lapa do Bode Cave and Gruta Escondida in the Município Itaeté of Bahía. A single, dead individual was collected from Bob Cave, ca. 20 km northeast ( Gallão and Bichuette, 2016), also in Município Itaeté. The second population of T. lacrau  is represented by the type locality and only known specimen of its junior synonym, R. brejo  , in the state of Ceará. The two localities are 700 km apart but the region between them, the Serra do Espinhaço, is poorly sampled. Assuming the record from Ceará is reliable, this species may be discovered in the Serra do Espinhaço when it is more thoroughly surveyed.

ECOLOGY: Most of the known specimens of T. lacrau  were collected under stones inside limestone caves. Despite extensive searches, no specimens were found outside the type locality, Lapa do Bode Cave ( Gallão and Bichuette, 2016), where this species has a well-established population (fig. 2G). The habitat, distribution and habitus are consistent with the troglophile ecomorphotype ( Prendini, 2001 b).

REMARKS: Rhopalurus brejo  was poorly described in an obscure journal with distorted plates. The original description and illustrations barely permit us to determine to which genus this taxon belongs. Although the holotype and only known specimen of R. brejo  was not directly examined during the present investigation, its identity was verified by photographs received from the MNHN (and now publicly available at https://science.mnhn.fr/institution/ mnhn/collection/rs/). Examination thereof, together with the limited data provided in the original description, leaves no doubt that R. brejo  is conspecific with T. lacrau  . Rhopalurus brejo  shares with T. lacrau  the presence of distinct pedipalp carinae and eight subrows of denticles in the median denticle row of the chela fixed finger. We therefore propose the following synonym: Rhopalurus brejo Lourenço, 2014  = Troglorhopalurus lacrau  ( Lourenço and Pinto-da-Rocha, 1997), syn. nov. 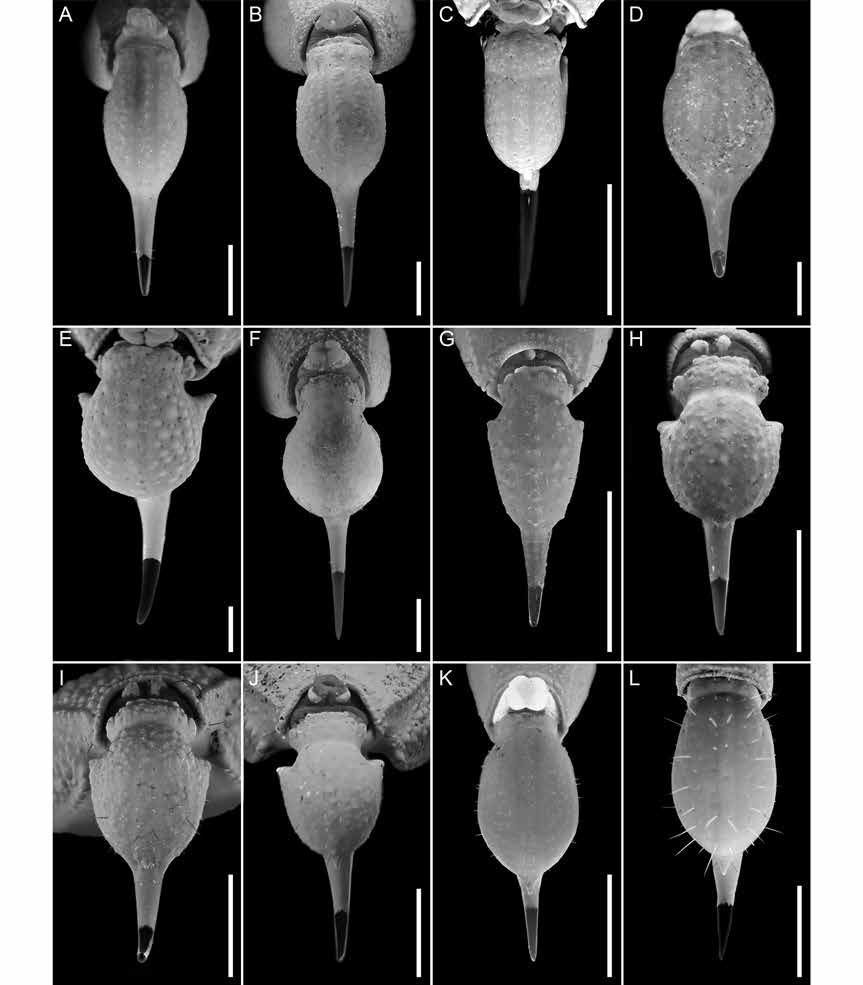