The new species is a very small tube-nosed bat with a forearm length of 28.4–29.7 mm and a body mass of ca. 3.0– 4.2 g. Teeth are not robust and the tooth rows are somewhat convergent anteriorly. Anterior upper premolar is relatively small, about half the height and less than one third of the crown area of the posterior premolar. The lower canine possesses a small but distinct additional anterior cusp.

The dorsal fur looks bicoloured owing to darkbrown underfur and bright golden tips of guard hairs, resembling M. aenea , H. isodon and to some extent M. rozendaali . In skull proportions the new species resembles M. aurata , M. suilla and M. ussuriensis but has a smaller skull size, a smaller anteri- or upper premolar and a better developed supplementary cusp on the lower canine.

Proportions are typical for Murininae with the body short and stocky; and the wings are wide with blunt tips. The tail is slightly shorter than the head and body, and the last vertebra is not included in tail membrane. The wing membranes are attached to the distal phalanx of the outer digit. The ears are wide and rounded, with a small emargination on posterior edge. The tragus is narrow and pointed, with a small additional lobe at base. The nasal tubes are relatively long, about 2.5 mm from the midline of the nose. The muzzle, wing membranes and ears are darkpigmented.

Dorsally the fur appears bicoloured; it is medium thick and the under fur is thin and somewhat curly, very dark brown (almost black) with somewhat paler tips. Guard hairs are about 9 mm in length, and are found both dorsally and ventrally. The dorsal guard hairs are dark-brown at the base and. the distal half are tricoloured with pale-brown and more dark brown rings and bright orange-gold tips. Hair on the belly is dark-brown at the base and tipped with pale silver-gray. The entire tail membrane from the proximal to distal edge, and about one third of the plagiopatagium next to the body, are covered dorsally with fur similar to guard-hairs covering

the body. Toes (up to the bases of claws), thumb, upper side of the forearm and proximal part of the fifth metacarpal are covered with bright golden hairs.

The skull has a rounded brain case and relatively gracile facial parts ( Fig. 2 View FIG ). The anteorbital opening is situated above the first root of the anterior upper molar, and the lacrimal opening is above the second root of the same tooth ( Fig. 3A View FIG ). Both sagittal and occipital crests are absent. The basisphenoid pits continue backward only slightly beyond the midline of the cochlea ( Fig. 4A View FIG ), similar to M. aurata and M. suilla . The pterygoids are relatively strong and are somewhat curved inwards posteriorly. The posterior palatal emargination is not large and possesses a wide medial projection ( Fig. 4A View FIG ). The posterior palate is shorter proportionally than in M. aurata , M. ussuriensis , and M. tubinaris ( Fig. 3 View FIG B–D). The ends of the angular and articular processes of the mandible are at the same level ( Fig. 2 View FIG ).

The upper tooth rows are slightly convergent anteriorly. The outer upper incisor is only slightly shorter in height than the inner one and is about twice as large in crown area ( Figs. 2 View FIG A–B and 3A). Upper canine is relatively small and shorter than the posterior premolar (PM 4 — Fig. 2A View FIG ). The anterior upper premolar (PM 2) is small and compressed between the canine and posterior premolar; it is less than half the height of PM 4 and at least 1 / 4 the size of the crown area ( Fig. 2 View FIG A–B). Upper molars have weak traces of mesostyles and very narrow postcingular shelves. Posterior upper molar possesses reduced but distinct post-paracrista ( Fig. 2B View FIG ). Lower molars have well-developed entoconids and reduced hypoconulids, joined with entoconids. The postcristid connects directly to hypoconulid, so the type of molars can be referred to as nyctalodont ( Fig. 2D View FIG ). The cusp pattern in M. suilla and H. isodon are different, better corresponding to myotodont type ( Kruskop et al., 2006). The talonid of the posterior lower molar is greatly reduced, about ¼ of the trigonid area. The lower canine possesses an additional small anterior cusp ( Fig. 2C View FIG ).

The name ‘harpioloides’ refers to the similarity of external features and lower canine between the new species and H. isodon .

Known only from the type locality. Type specimen was captured in a small humid ravine surround- ed by deciduous mixed forest with distinct presence of Manglietia and Solonea trees ( Kuznetsov et al., 2006). In the same biotope and place, several individuals of Rhinolophus affinis were captured ( Borisenko et al., 2006).

Comparison with Other Species

Murina harpioloides can be easily distinguished from Harpiola isodon , which it resembles in general external appearance, by somewhat smaller size, shorter fur on back and distinctly longer nasal tubes. Dental characters also separate Harpiola from Murina (Kuo et al., 2006) . Harpiola isodon possesses a large anterior upper premolar which is triangular in lateral view, exceeding the posteri- or premolar in size and only slightly smaller than the canine, whereas in M. harpioloides the anterior premolar is distinctly smaller than the posterior one ( Fig. 3 View FIG ). Although M. harpioloides possesses a visible additional cusp on the lower canine ( Fig. 2C View FIG ), it is much smaller than the same structure of H. isodon .

From M. aenea , M. cyclotis and M. rozendaali as well as from other species of the ‘ cyclotis ’ group sensu Koopman (1994), M. harpioloides can be distinguished by relatively light dentition, small anteri- or upper premolar, toothrows convergent anteriorly and outer upper incisor situated in latero-posterior position relative to the inner one ( Fig. 4A, 4E, and 4F View FIG ). Amongst all the ‘ cyclotis ’ group species, only M. rozendaali is of comparable size with M. harpioloides . The other species in the group, including smallest specimens of M. cyclotis , are distinctly larger. M. harpioloides possesses longer golden hair tips and darker ventral coloration than M. rozendaali and shorter golden hair tips than M. aenea (which otherwise looks similar in color).

From M. tubinaris and M. ussuriensis the newly described species differs in fur coloration (especially from M. tubinaris , which possess very characteristic grayish coloration without any golden or even brownish tinges), smaller skull and shorter basisphenoid pits which do not continue backward beyond the cochlea ( Fig. 4A and 4C View FIG ). Morphologically, the

new species looks most similar to M. aurata and M. suilla , from which it can be distinguished by somewhat smaller skull (comparable in size with the skull of the smallest M. aurata male) with more swollen braincase, smaller posterior palatal emargination with wide medial projection and by dark skin on the muzzle tip. Murina harpioloides has less pronounced orange tinges in coloration and more obvious dark underfur, than M. aurata and particularly M. suilla . From all of the four species, M. harpioloides differs in having a better developed fur cover on tail and wing membranes and by proportionally smaller talonids on the lower molars.

The taxonomic distinctiveness of M. harpioloides is also supported by preliminary data from cytochrome c oxidase subunit I (COI) gene sequences (C. M. Francis, A. V. Borisenko, N. V. Ivanova, J. L. Eger, B. K. Lim et al., unpublished data). However, further investigation including analysis of DNA nucleotides, and the search for additional specimens is needed to uncover the actual relationship of this new species with other tube-nosed bats. 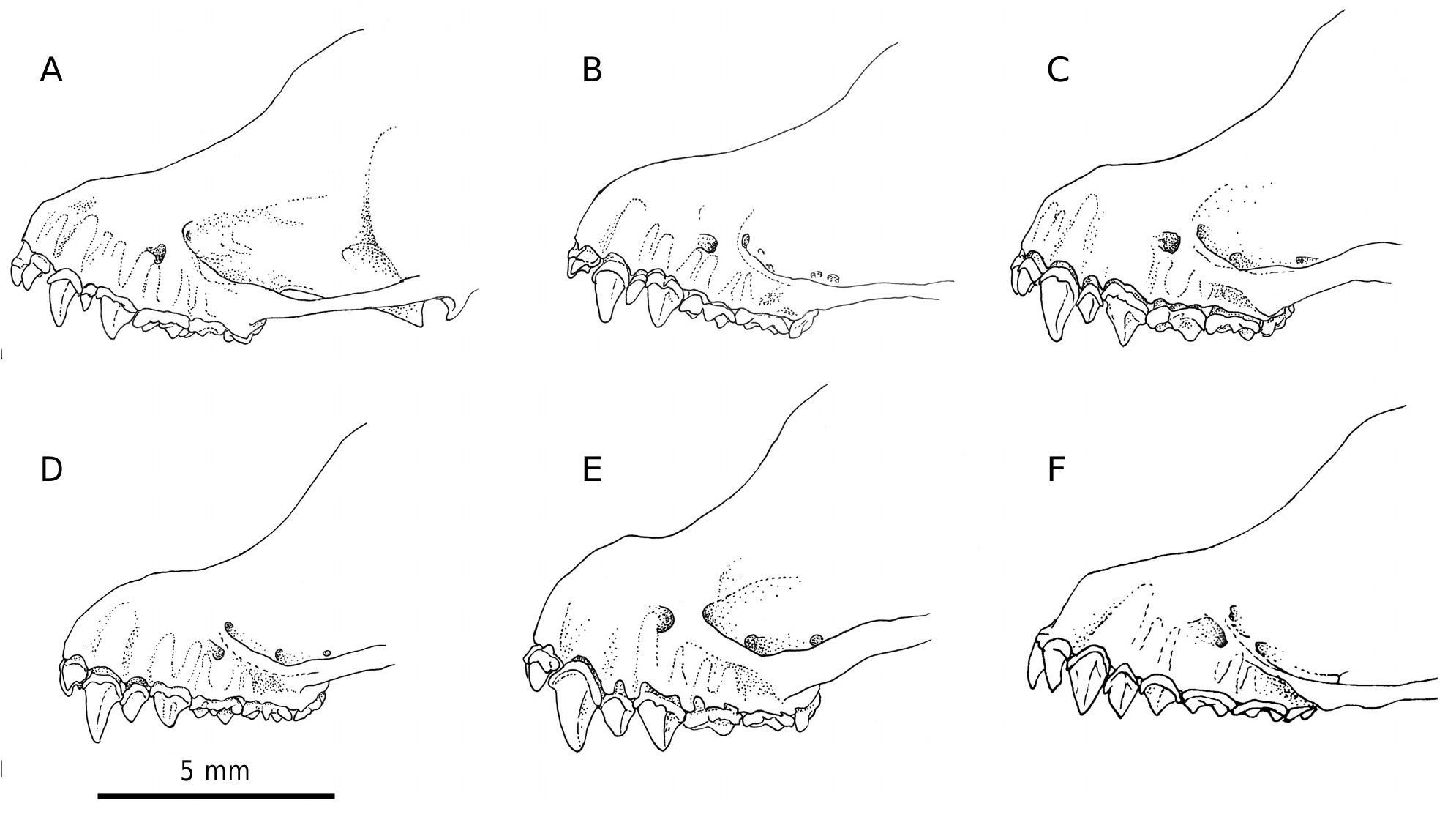 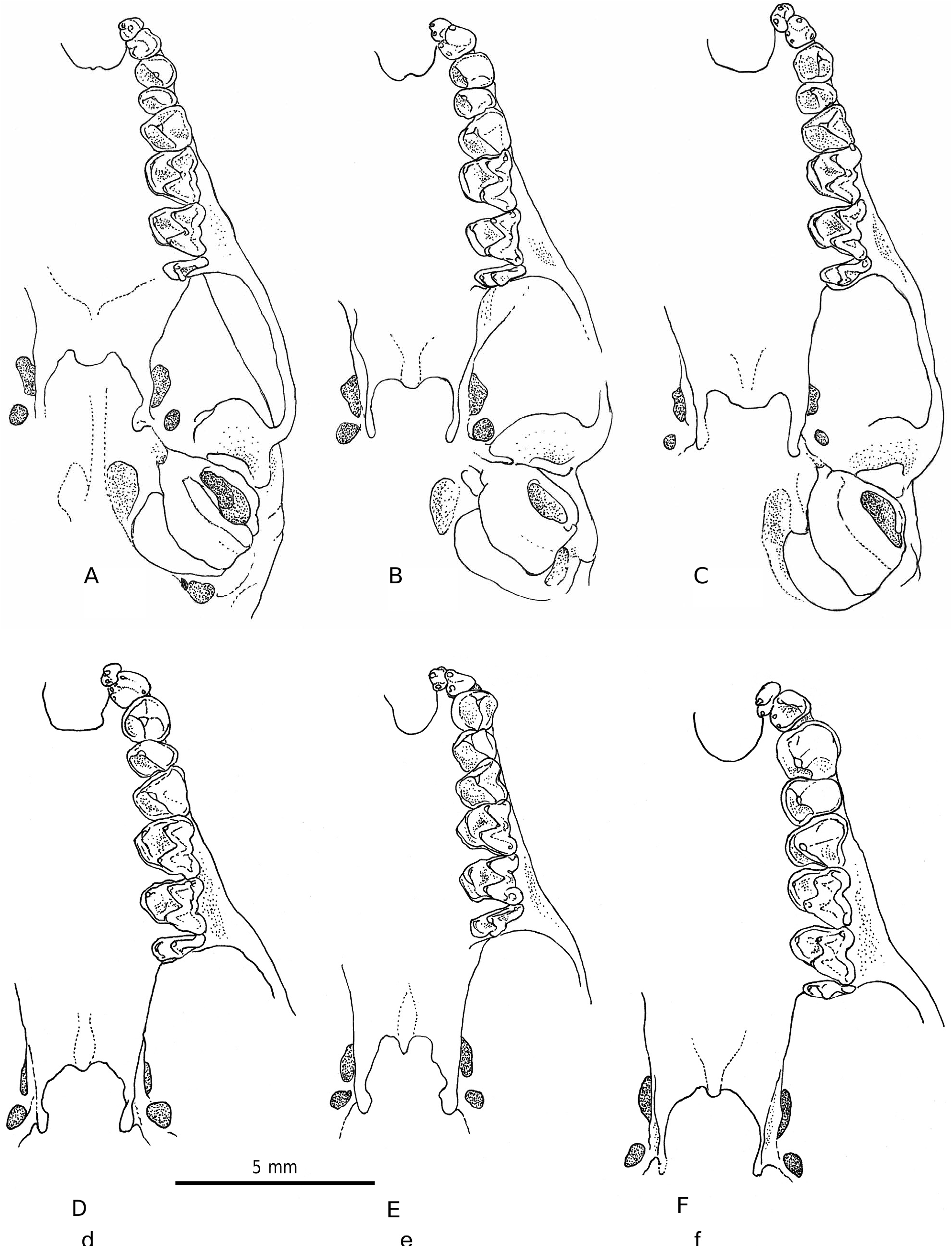