Pancratium rubrum (Herb.) Pav. ex Steud. was not included in Ruiz and Pavon (1802), even though a specimen from their expedition (FI!, FI011974) is labelled as the type of S. rubrum Herb. The name was validated by von Steudel (1841). Ravenna (1978) believed that the type specimen represented Stenomesson flavum (Ruiz & Pav.) Herb., a species that was originally illustrated and described in Ruiz and Pavon (1802) as Pancratium flavum Ruiz & Pav. We believe that Ravenna (1978) was mistaken in this regard. The specimen has a single scape that bears only three flowers, and the stamens are barely if at all exerted from the perigone. Stenomesson flavum always has > 3 flowers and the stamens are exerted at least 1 cm from the limb.

Ravenna (1978) diagnosed Clinanthus coccineus (Ruiz & Pav.) Meerow as belonging to his Stenomesson subgen. Fulgituba Ravenna (1974), along with Clinanthus incarnatus (Kunth) Meerow, C. microstephius (Ravenna) Meerow, C. variegatus (Ruiz & Pav.) Meerow and other species, all of which have varying apical zones of green on the tepals. Recent collections in Peru (N. C. Melly, S. Leiva, pers. comm.) confirm this, with Clinanthus coccineus ( Fig. 4D View Figure 4 ) found both in coastal lomas and in the northwestern Andean slopes. Ravenna (1978) seems to have considered S. rubrum a synonym for S. breviflorum Herb. We disagree with this assessment. Herbert (1837) illustrated both in the same plate ( Fig. 4A View Figure 4 ). The type specimen of S. breviflorum (Maclean s.n. K!, K000322395 & 396) clearly bears pseudo-petiolate leaves, which confirms its place in Stenomesson rather than Clinanthus . Clinanthus ruber is fairly widespread in northern Peru, and can have red or pink flowers, but never more than five in all the material we have seen. It is variable in the degree to which the limb spreads from the throat of the perigone. The flowers are without any green apical zone, and bear relatively narrow leaves < 1 cm wide. 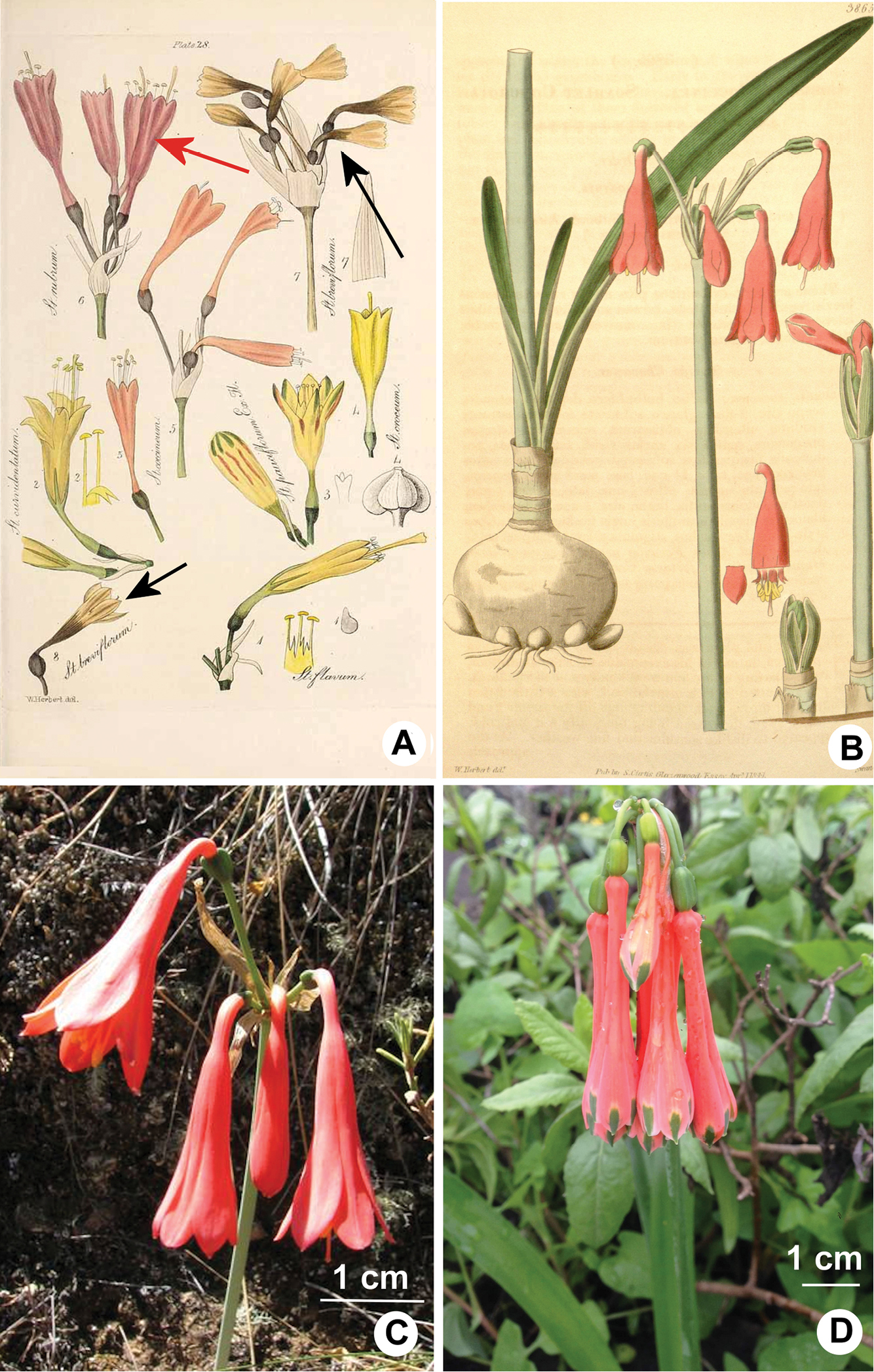