Etymology. The name of this species is derived from the type locality, Karaj.

Shaw & Seeman (2009) drew attention to some distinctive character states in Myrmozercon  . The palp trochanter usually has one ventral seta, but M. karajensis  and M. beardae  have the normal mesostigmatid complement of two ventral setae. The corniculi of most species, including M. karajensis  , are short and broad, not strongly sclerotised and horn-like. The genus is variable in the presence or absence of seta st 4 (present in M. karajensis  ) and in the degree of fusion of the sternal shield with the endopodal plates. In M. karajensis  the endopodal plates between coxae III and IV are completely free. Myrmozercon  also has reduced chaetotaxy on some leg segments. This trend is developed further in Myrmozercon karajensis  , which has only two ventral setae on genu I and tibia I instead of the normal three. This requires an expansion of the definition of the genus, and of the subfamily Melittiphinae.

Most species of Myrmozercon  , including the type species M. brevipes  , show moderate to strong hypertrichy on the dorsal shield. However, M. burwelli Shaw & Seeman, 2009  (24–25 pairs), and the new species M. karajensis  (33 pairs), have a reduced dorsal chaetotaxy. All species appear to have asymmetrical and unpaired setae on the dorsal shield, which makes it difficult to recognise their homology. For that reason, the setal notations in Figure 13View FIGURES 10 – 18 must be regarded as provisional. In most species the dorsal shield is reduced or truncated posteriorly to expose a strip of unsclerotised opisthonotal skin, but this is not true in every species. Species of Myrmozercon  also vary in the presence or absence of metasternal setae st 4, and the extent to which the sternal shield is fused with the endopodal plates. The sternal shield of M. karajensis  is similar to that of many free-living Mesostigmata  , with three pairs of setae and two pairs of lyrifissures, separate endopodal plates between coxae III and IV, and separate metasternal setae in the soft skin. The leg chaetotaxy of Myrmozercon  species is variable, and does not provide diagnostic characters that define the genus ( Shaw & Seeman, 2009). The new species M. karajensis  adds some further variation to the leg chaetotaxy, by having only two ventral setae on genu I and tibia I, where most species have three. It also has two ventral setae on the palp trochanter where most species of Myrmozercon  have one. Shaw & Seeman (2009) described a swelling on the dorso-distal edge of the palp trochanter in several species, but this structure is not present in M. karajensis  . This instability in morphology, and the edentate chelicerae and short peritremes of Myrmozercon  , suggest that Myrmozeron is parasitic on its ant hosts, and not simply a commensal in its host's nests, but this has not been established experimentally. The specimens of M. karajensis  were found clinging to the abdomen and head of the ants. 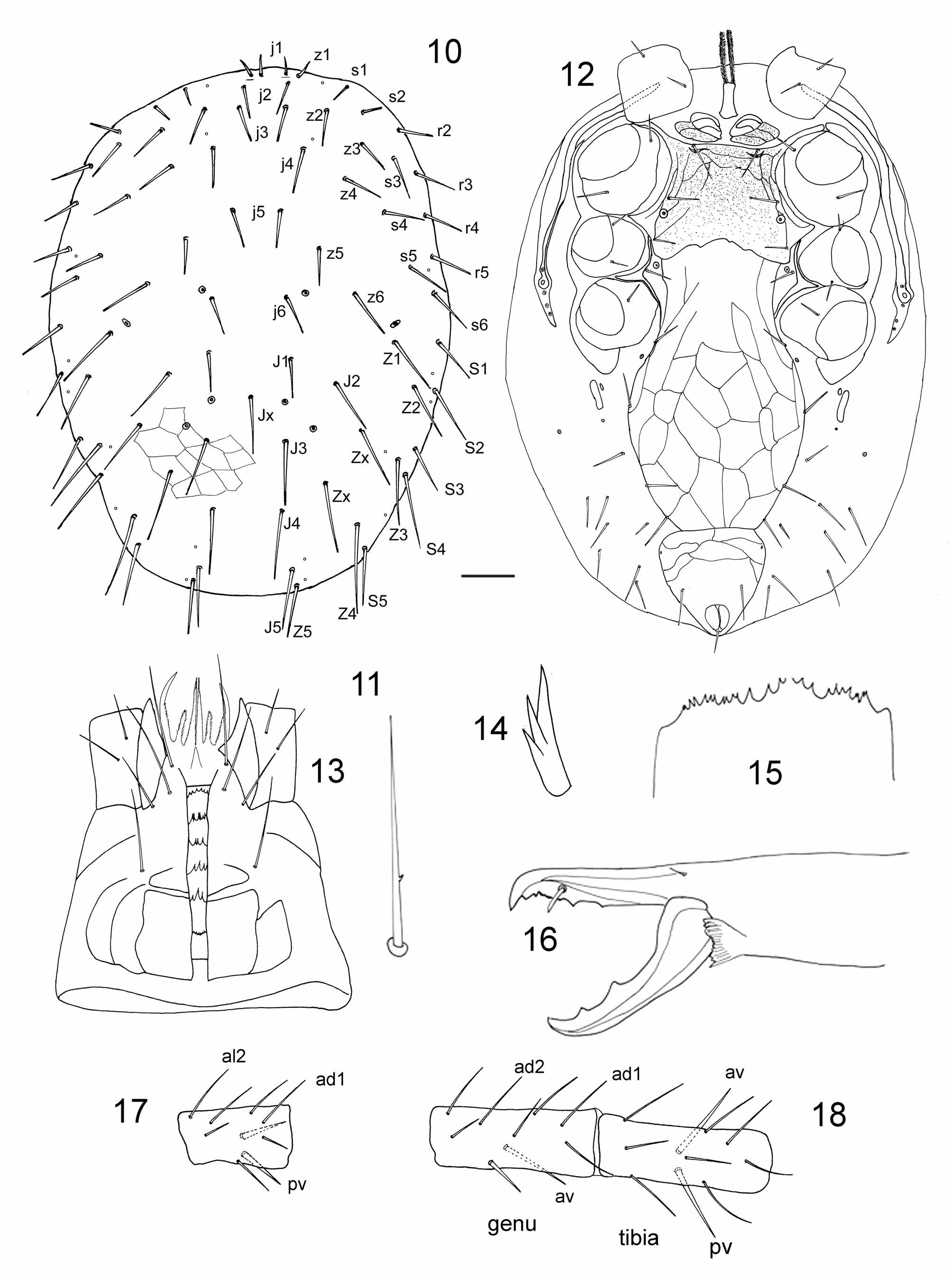