Diagnosis. As for the genus.

Scales cycloid, circuli absent on exposed area of scales, radii well developed and extending to posterior margin of scales parallel or slightly divergent. Lateral line slightly decurved ventrally, completely pored from supracleithrum to base of caudal fin, with 36* (16), 37 (8) or 38 (2) perforated scales. Scale rows between dorsal-fin origin and lateral line 5 (26). Scale rows between lateral line and pelvic-fin origin 3* (22) or 4 (4). Scales along middorsal line between tip of supraoccipital process and origin of dorsal fin 12 (3), 13 (20) or 14* (3). Horizontal scale rows around caudal peduncle 14 (26).

Sexual dimorphism. None of the specimens have hooks on the fins or any other sexually dimorphic features.

Geographic distribution and habitat notes. The species is known from the rio Lençóis, a tributary of rio Paraguaçu, which is a relatively small, eastern drainage in Bahia State, Brazil ( Fig. 3 View Fig ). The type-locality of Myxiops aphos   is a shallow, headwater stream, with fast water current over a rocky bottom and margin, and with a small amount of riparian or submerged vegetation. Specimens were collected in small pools 50 cm deep. The rio Lençóis is a blackwater river such as is characteristic of rivers draining soils that are extremely poor in nutrients and highly acidic ( Harley, 1995). Copionodon pecten   , a trichomycterid endemic to the rio Paraguaçu drainage ( de Pinna, 1992), and one species of loricariid, Neoplecostomus sp.   , were collected together with Myxiops   .

Etymology. The name aphos   , from the Greek, meaning dark, obscure, in allusion to the dark color of the water of the rio Lençóis.

Stomach contents. The analysis of the stomach contents of two specimens revealed the presence of filamentous algae, terrestrial vegetal fragments, larvae of the Chironomidae   , and unidentified insects fragments. 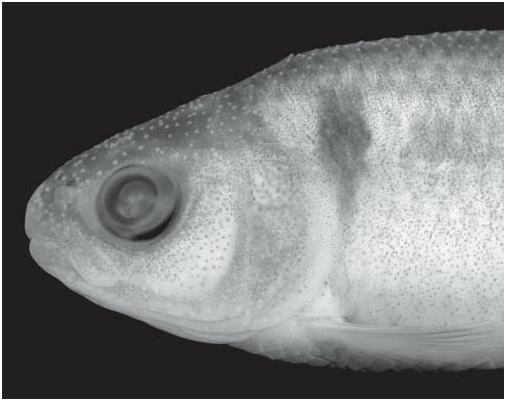