Allium goumenissanum is an autumn flowering species, member of Allium sect. Codonoprasum Rchb. characterized by a sub-spherical to spherical inflorescence, 2 opposite spathe valves much longer than pedicels, reddish-white to brownish tepals and stamens included within perigone. It is related to A. stamatiadae Trigas & Bareka 2020:287 ), A. orestis Kalpoutzakis, Trigas & Constantinidis (2012:223) and A. panormitisi Galanos & Tzanoudakis (2019: 197) from which, however, differs in a number of characters related to the outer tunics of the bulbs ( A. panormitisi ), stem attachment to the bulb ( A. stamatiadae ), the morphology of the spathe-valves ( A. stamatiadae ), the length of pedicels ( A. orestis ) and the portion of the stem covered by the leaf-sheaths and the length of the stamens ( A. panormitisi ).

Etymology:—The specific epithet refers to Goumenissa, the small traditional city near the type locality of the species, well known for its vineyards and its traditional local orchestra (Panda) called “chalkina”.

Distribution, Ecology and population biology:— Allium goumenissanum is presently known only from the type locality and two other sites, all close to Goumenissa village of Kilkis’ province (NC Greece), at the foothills of Mt Paiko (250–400 m a.s.l.). Allium goumenissanum grows, mainly, in forest margins and small streams characterized by the presence of Quercus pubescens Willdenow (1796: 279) and Platanus orientalis Linnaeus (1753: 999) , respectively. In the type locality the new species is also accompanied by plant species like Quercus coccifera Linnaeus (1753: 995) , Cistus creticus Linnaeus (1762: 738) , Teucrium chamaedrys Linnaeus (1753: 565) , Prunella vulgaris Linnaeus (1753: 600) ,), Nigella damascena Linnaeus (1753: 534) , Iris sintenisii Janka (1877: 244) and Briza maxima Linnaeus (1753: 70) . All known subpopulations of the new species are rather small and geographically localized. The plants usually form dense clusters, typically consisting of both mature and immature individuals, while scattered single individuals also occur. The subpopulation located between Goumenissa and Filirias consists of more than 1000 individuals occupying an area of less than 500 m 2, while the two other subpopulations (in a distance of ca. 7.5 and 9.5 km from the former) count about 200 individuals each. The population structure mentioned above and the presence of the bulblets, around the main bulb, indicate a significant role of vegetative reproduction in A. goumenissanum . Further studies, however, are necessary for clarifying the role of the sexual reproduction in this triploid species. Preliminary results showed that, in the new species, the pollen fertility approaches 78% and in each inflorescence, ca. 25% of the flowers produce, at least, one good seed. Data of this kind, however, are not available from other diploids or polyploids autumn-flowering Mediterranean Allium species. With regard the total distribution range of the new species it is worth to note that the low and moderate elevation sites of the mountains of the north continental Greece are not thoroughly explored and autumn–flowering species are, in general, considered as under–collected. Thus, the presence of additional populations of A. goumenissanum in northern Greece and neighboring countries cannot be ruled out. So far, autumn-flowering Allium spp. resembling A. goumenissanum have been collected from three different regions of the North Greece (unpublished data, Purkhard Biel and Zacharias Kypriotakis pers. comm.), as well as from the island of Evia (unpublished data; Trigas & Bareka 2020), but the quality and/or the quantity of the material available do not allow for an accurate identification and comparison.

Karyology:—In all the material investigated 24 chromosomes were counted in the metaphase plates. Considering that x = 8 is the basic chromosome number in Allium sect. Codonoprasum ( Tzanoudakis 1992) the new species is triploid (2n = 3x = 24). According to the available data on the cytology of the Mediterranean autumn – flowering species of Allium sect. Codonoprasum ( Özhatay et al. 2018) , A. goumenissanum seems to be the first triploid member of this group. In a total of 18 Mediterranean autumn-flowering species known so far, 13 are diploids (2n = 2x = 16) and 5 tetraploids (2n = 4x = 32). Since, of these 5 polyploid species, only one was reported from the Eastern Mediterranean area viz. the Central Aegean endemic A. apolloniensis Biel et al. (2006: 367) , A. goumenissanun is the second one, but it is a triploid species distributed far away from the Central Aegean area ( Fig. 6 View FIGURE 6 ). Regarding chromosome morphology, the karyotype analysis showed that the complement of the new species consists, almost exclusively, of metacentric chromosomes which, also, show no significant size differences ( Table 1 View TABLE 1 , Fig. 5 View FIGURE 5 ). According to our results, the mean absolute length of the chromosomes of the haploid complement (x = 8) is ca. 8 μm, the R-length (percentage of the length of each individual chromosome in the total length of the haploid complement) varies between 14.84 and 10.50%, while the arm ratio (r) values vary between 1.11 and 1.24 ( Table 1 View TABLE 1 & Fig. 5 View FIGURE 5 ). In the metaphase plates investigated, the number of nucleolar organizer chromosomes (SAT-chromosomes) observed varies between 0 and 4 ( Fig. 5 View FIGURE 5 ) always belonging to ‘paniculatum’ type (mA according to Tzanoudakis 1983). Due to the small size differences among the chromosomes, it is, however, very difficult to speculate in how many homologous chromosomes set they belong. In the case that A. goumenissanum is considered as autopolyploid, it is concluded that in the haploid complement, at least two SAT-chromosomes are presented (x = 6m + 1 mA + 1 mA). The only worth noting comment regarding the chromosome complement differentiation of the new species is the observation that in most of the metaphase plates studied, one out of the three largest chromosomes shows an arm ratio higher than others (usually higher than 1.3, but never higher than 1.7) and could be classified as msm ( Fig. 5 View FIGURE 5 ). It is, however, difficult to say that this karyotype differentiation suggests an allopolyploid origin of the new species or a karyotype differentiation due to some intra- or inter-chromosomal exchange.

Taxonomic relationships:—There is no doubt that A. goumenissanum shares the main diagnostic characters of Allium sect. Codonoprasum and especially of the A. paniculatum Linnaeus (1759: 978) group (presence of two opposite and unequal spathe-valves longer than pedicels, fastigiated inflorescence, campanulate perigon, stamens with simple filaments, ovary without conspicuous nectaries). The new species is also a real autumn-flowering species due to its late flowering season (September /October i.e. much later than other Allium species in the area) and due to the absence of the bulbs’ dormancy from its ontogenetic cycle. Considering that in the list given by Özhatay et al. (2018) summing the 18 Mediterranean autumn-flowering Allium species of the A. paniculatum group, 13 of them are mentioned as diploids (2n = 2x = 16) and 5 as tetraploids (2n = 4x = 32), A. goumenissanum should be added as the first triploid (2n = 3x = 24) species of this group. As it has been noted by Galanos & Tzanoudakis (2019) the species group mentioned above consists of species which differ in a number of ecological, morphological and cytological characters. As a real autumnflowering species with a sub-spherical inflorescence and greenish red to brownish flowers, A. goumenissanum is well distinguishable by the autumn-flowering species of the same section described from the Greek islands with a similar set of characters (viz. A. tardans , A. panormitisi , A. makrianum Brullo et al. (2010: 267) and A. stamatiadae ), mainly due to the smaller portion (1/2-2/3) of the stem covered by the leaf sheaths. Comparing to the four aforesaid species it is, also, well distinct due to some other characters, such as the many-flowered inflorescence and the much longer spathe valves (compared to A. tardans ), the included stamens and the outer bulb tunics (compared to A. panormitisii ), the glabrous leaves and leaf sheaths (compared to A. makrianum ), the texture of spathe valves (different from the leaves) and the type of attachment of the scape to the bulb (compared to A. stamatiadae ). The new species is also well distinguished from A. orestis , an autumn-flowering species described from south continental Greece (Peloponnese), which is characterized by a laxer inflorescence with strongly unequal pedicels and yellowish perigone segments ( Kalpoutzakis et al. 2012). Allium goumenissanum also differs from all the five species mentioned above with regard its chromosome number. The new species is triploid (2n = 3x = 24) while all the five formers are diploid (2n = 2x = 16). It is worth noting that the triploid chromosome number, 2n = 3x = 24 has been mentioned, also, for A. phitosianum Brullo et al. (2003: 134) , a member of the Allium paniculaum group described from central continental Greece, as a “typical autumn-flowering species” ( Brullo et al. 2003). Allium phitosianum is well distinct from A. goumenisannum as, according to the original description, it is a smaller plant (stem 12–30 cm) with outer bulb tunics splitting in stripes, shorter spathe valves and yellow anthers. Since, however, A. phitosianum is excluded by Özhatay et al. (2018) from the list of the 18 autumn-flowering Mediterranean species of the A. paniculatum group mentioned above, up to the present, A. goumenissanum is considered as the only triploid member of this group. Considering, however, that by Özhatay et al. (2018) some other Greek species of A. sect. Codonoprasum described as late-flowering are not included in their list viz. the tetraploid A. dirphianum Brullo et al. (2003: 133) , while are included species which certainly come to flowers much more earlier viz. A. euboicum Rechinger (1961:435) there is, obviously, the need for a re-evaluation of the criteria used to characterize an Allium species as late Summer- or Autumn-flowering. To this direction, in addition to flowering period, parameters related to the geographical position, the elevation and the micro-climate conditions should also be considered. Allium tardans , for example, which is endemic to Crete-Karpathos in the southern Aegean area, very often comes to flower during August, that is, during the same period with A. frigidum Boiss. & Heldr. in Boissier (1854: 34) and A. oreohellenicum Tzanoudakis et al. (2019: 231) , which are endemic to the higher elevations of the mountains of Southern and Central continental Greece ( Tzanoudakis et al. 2019). The last two species, however, are not considered as autumn-flowering. Similar seems to be the case with A. phitosianum , collected and described from the top of the mount Timfristos (Velouchi), of central continental Greece, at an elevation of ca. 2000 m ( Brullo et al. 2003). In such altitudes and especially, in the corresponding habitats of the central continental Greece, the climate is not typical Mediterranean: Winter lasts, almost, 8 months, rainfalls are often even during July and August, dry period, actually, does not exist while the border-lines between Spring, Summer and Autumn, are not clear. With regard the taxonomic relationships within the group of the Greek late-summer and /or autumn-flowering species, there is no doubt that some of them are really taxonomically isolated, especially those being endemic in southern and southern-east Aegean islands viz. A. platakisii Tzanoudakis & Kypriotakis (1993: 309) , A. archeotrichon Brullo et al. (1999: 42) , A. symiacum Galanos & Tzanoudakis (2017: 107) ( Fig. 6 View FIGURE 6 ). It is worth noting that in this part of Greece different Allium sections are, also, represented by autumn-flowering species ( Tzanoudakis 2001), indicating that autumn-flowering has probably evolved independently at different clades of the genus. Some other autumn- flowering species of A. sect. Codonoprasum, however, described from continental Greece or from Greek islands near the continent seem to be members of a complex including related diploid as well as polyploidy species. The species included in the Table 2 View TABLE 2 , as well as species like A. rausii Brullo et al. (2003: 136) seem to be candidate members of such a complex. Keeping in mind that floristic exploration of the Greek area is going on and that several Greek, and not only, Botanists are interested in the genus Allium in the area, new data are expected soon with regard the distribution patterns and the relationships of the autumn-flowering species. Allium brussalisii Tzanoudakis & Kypriotakis (2008: 141) seems to be a good and representative example. It has been described as a local endemic of the mountain Parnis, near Athens, but in a few years it became an East Mediterranean species reported from several localities of the whole south Greece ( Fig. 6 View FIGURE 6 ) and the Asia minor as well ( Koçyigit et al. 2014, Kalpoutzakis et al. 2019).

FIGURE 1. Allium goumenissanum (cultivated plants):A. Foliage leaves produced by activation of both bulbs and bulblets. B. Bulb with bulblet.- All photographs by Vasilis Ioannidis.

FIGURE 2. Allium goumenissanum (in the wild). A. Inflorescence, B. Shape and colours of perigone and perigone-segments. - All photographs by Vasilis Ioannidis. 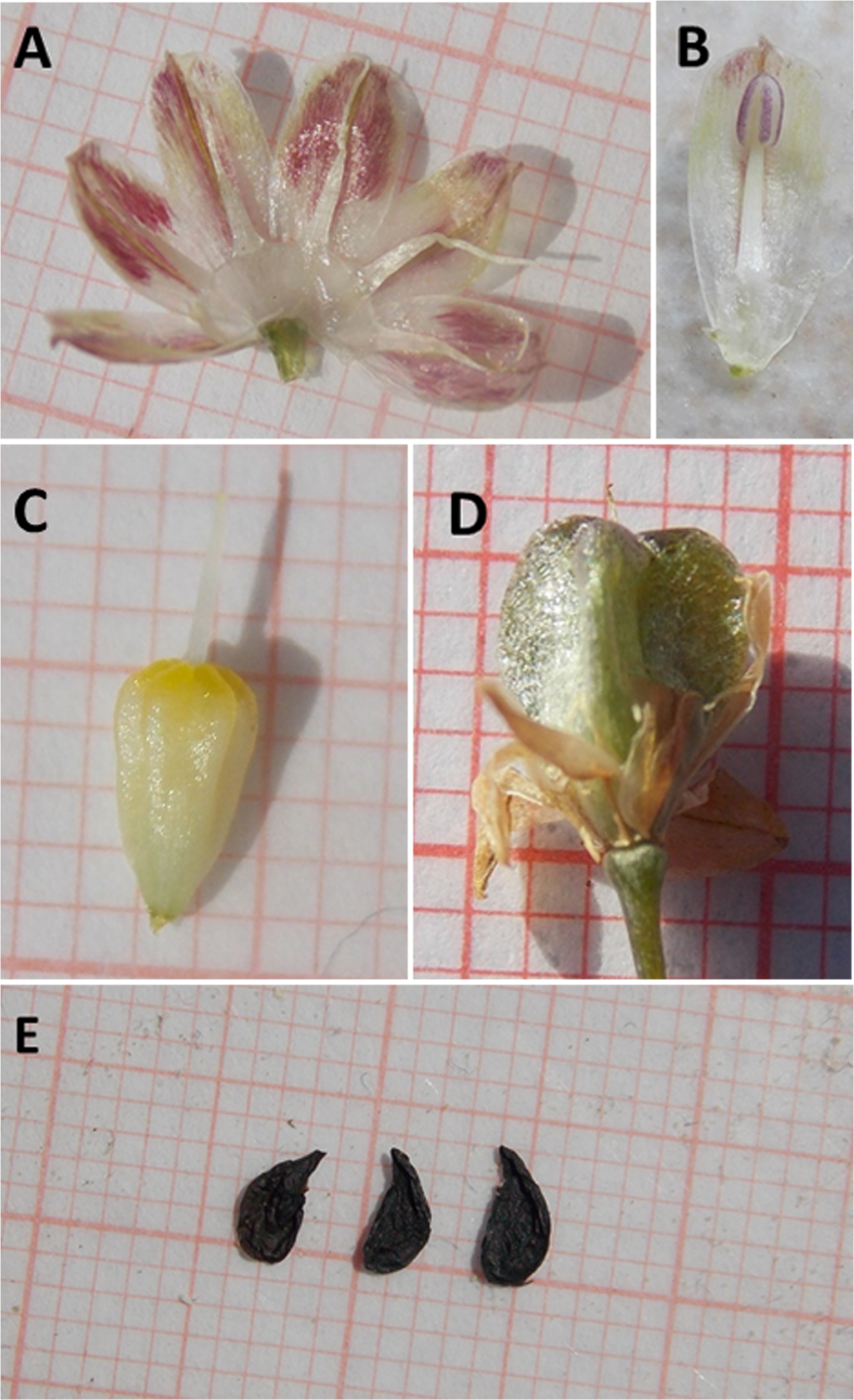 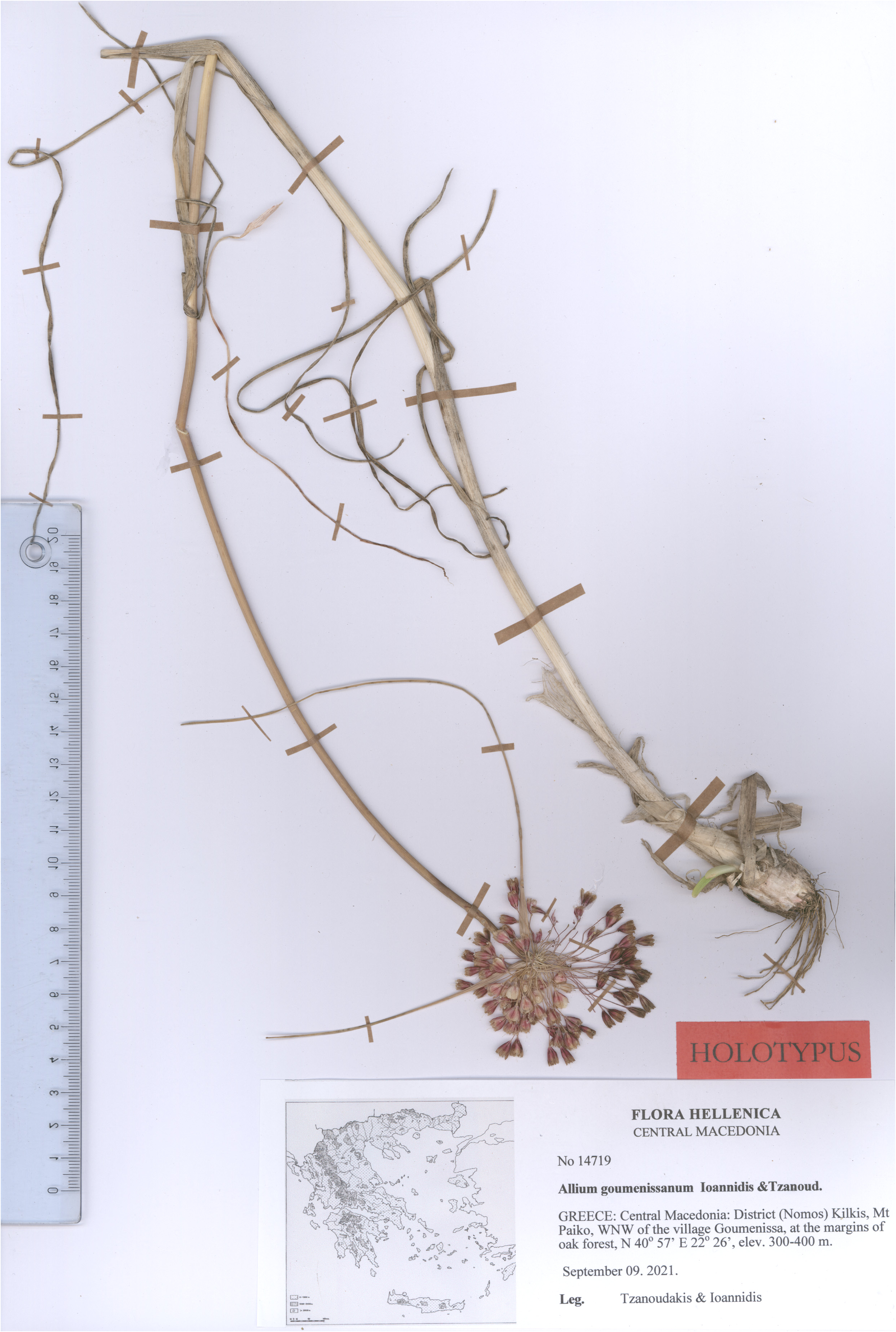 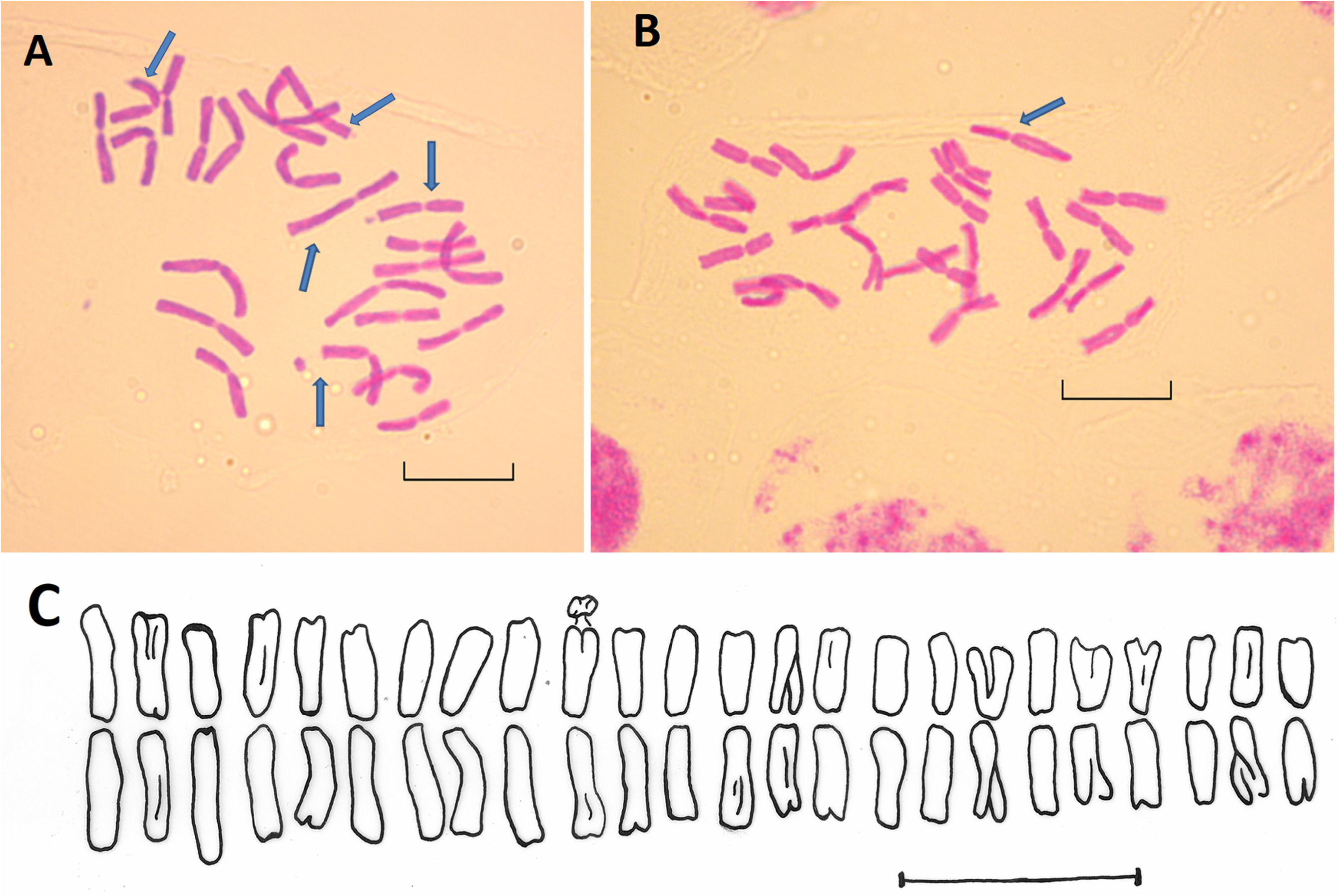 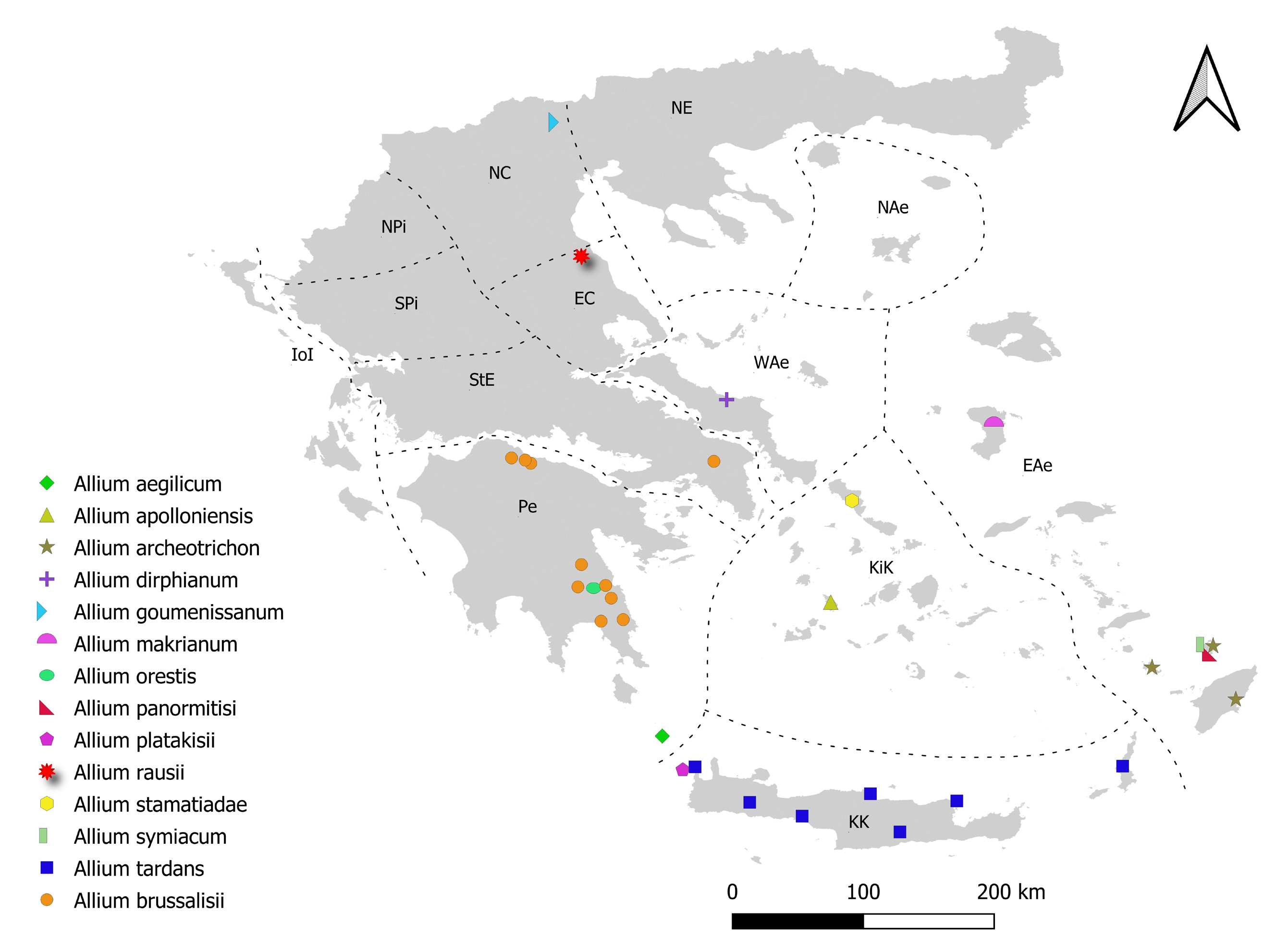 FIGURE 6. Distribution in Greece of species of Allium sect. Codonoprasum with a late flowering period (August-November). Phytogrographical subdivisions according to Dimopoulos et al. (2013).